MNF: The latest scores and updates from the Saints vs. Raiders

Lt. Gov. Matt Pinnell and Cherokee Nation Principal Chief Chuck Hoskin Jr. address a gathering for the opening of a new Cherokee Nation exhibit at the J.M. Davis Arms and Historical Museum in Claremore on Friday. 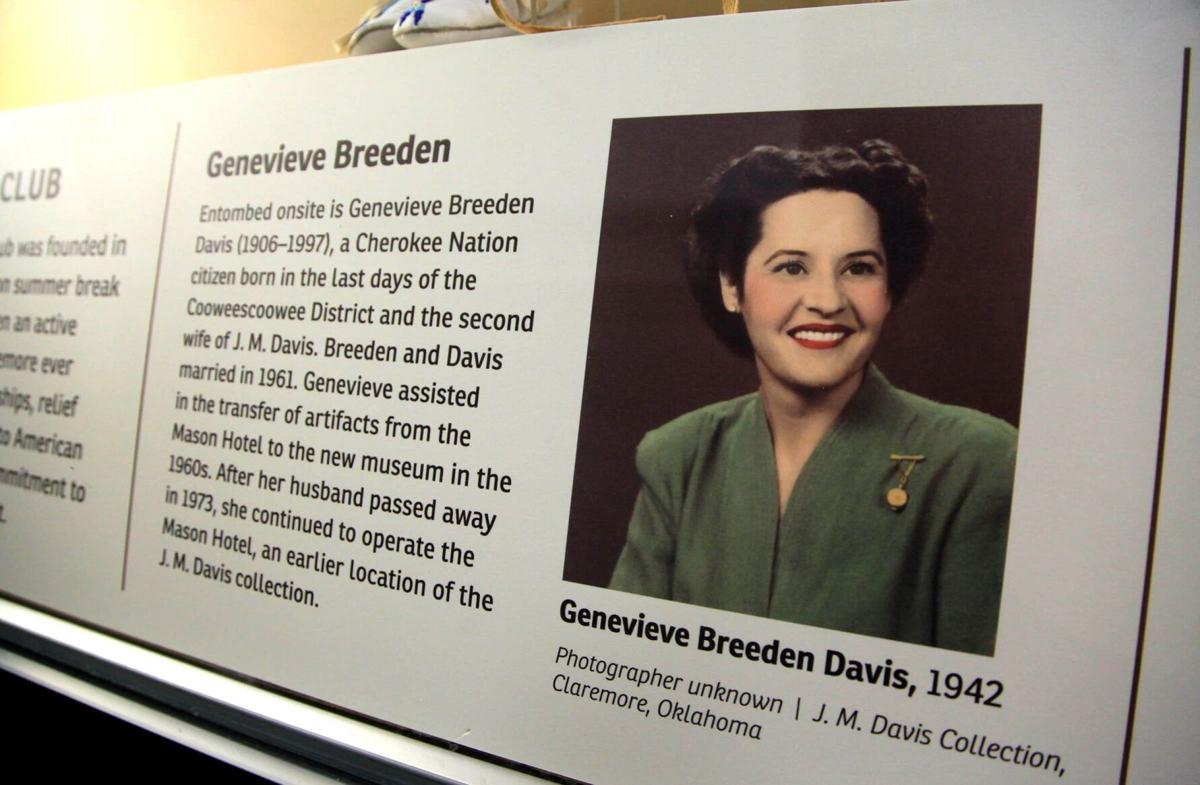 Genevieve Breeden, a citizen of the Cherokee Nation and the widow of J.M. Davis, is featured in a new display at the J.M. Davis Arms and Historical Museum. She was active in the Pocohontas Club and moved artifacts from the couple’s Mason Hotel to the new museum in the 1960s. 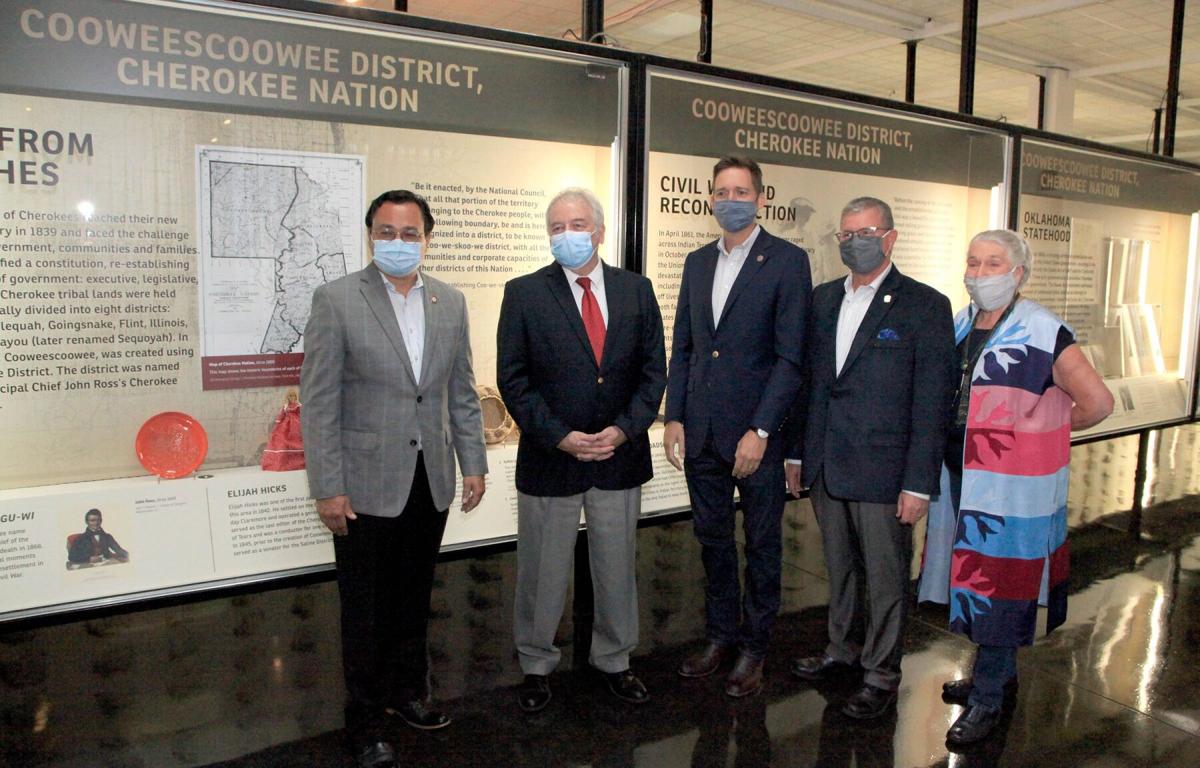 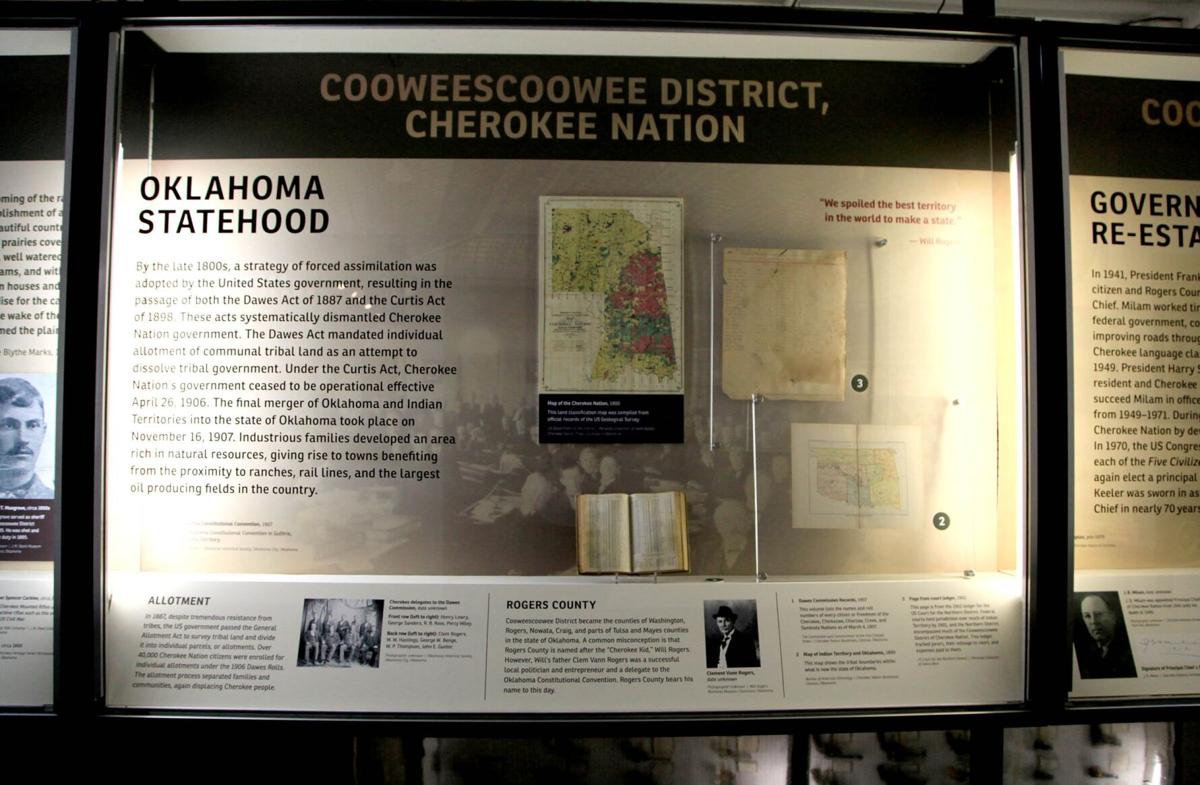 Displays at the J.M. Davis Arms and Historical Museum in Claremore present 200 years of Cherokee Nation history in Northeast Oklahoma.

CLAREMORE — The Cherokee Nation, and more specifically the Cooweescoowee District of the Nation, gained a prominent public space Friday with the unveiling of a new section at the J.M. Davis Arms and Historical Museum.

Created the past few years as a cooperative effort between the museum, the Cherokee Nation and its heritage and cultural tourism programs along with the Indian Women’s Cherokee Pocahontas Club, the effort to brings 200 years of regional Cherokee history to visitors.

“It’s a wonderful day because the Cherokee Nation, which is already a great partner with the J.M. Davis Museum, now has a very prominent place in the museum,” Hoskin said. “We have always recognized that the museum is a wonderful institution and a great stop for people going through the area, and we have been there at different times to help financially, but this is more important because we’re providing some substance to the museum ... about Cherokee history that is very much connected to this area,” Hoskin said.

Austin said the display tells the story of the Cooweescoowee District of the Nation, which is the historical name for the Rogers County area and eastern Oklahoma.

Displays that fill panels along one aisle near the front of the museum cover a 200-year period from migration of early settlers and the Trail of Tears, through the Civil War and Reconstruction, statehood, the oil boom and to present times.

“Some of these items are being shared within the Cooweescoowee District for the first time in 120 years,” Austin said. “We want more people to stop in Claremore, more people along Route 66 and more people who haven’t been to the J.M. Davis Museum in a long time to have a reason to come back again.”

Pinnell and Hoskins emphasized the cooperation behind the display and its potential for tourism.

“I’m very proud of the story this exhibit tells but I’m also proud of the partnership that it reflects and I’m proud that it is Cherokees telling the Cherokee stories with our good friends,” Hoskin said.

Pinnell said that tourism is Oklahoma’s third largest industry in large part due to state and tribal partnerships.

“People come to Oklahoma because they want to see America,” he said. “You combine Route 66 with Will Rogers with the Sovereign Nation, I’m telling you folks, you can see America in one town. The good, the bad, where we were, where we’re going to go as a state and a country, you can see it all right here in Claremore.”

Lt. Gov. Matt Pinnell and Cherokee Nation Principal Chief Chuck Hoskin Jr. address a gathering for the opening of a new Cherokee Nation exhibit at the J.M. Davis Arms and Historical Museum in Claremore on Friday.

Genevieve Breeden, a citizen of the Cherokee Nation and the widow of J.M. Davis, is featured in a new display at the J.M. Davis Arms and Historical Museum. She was active in the Pocohontas Club and moved artifacts from the couple’s Mason Hotel to the new museum in the 1960s.

Displays at the J.M. Davis Arms and Historical Museum in Claremore present 200 years of Cherokee Nation history in Northeast Oklahoma.