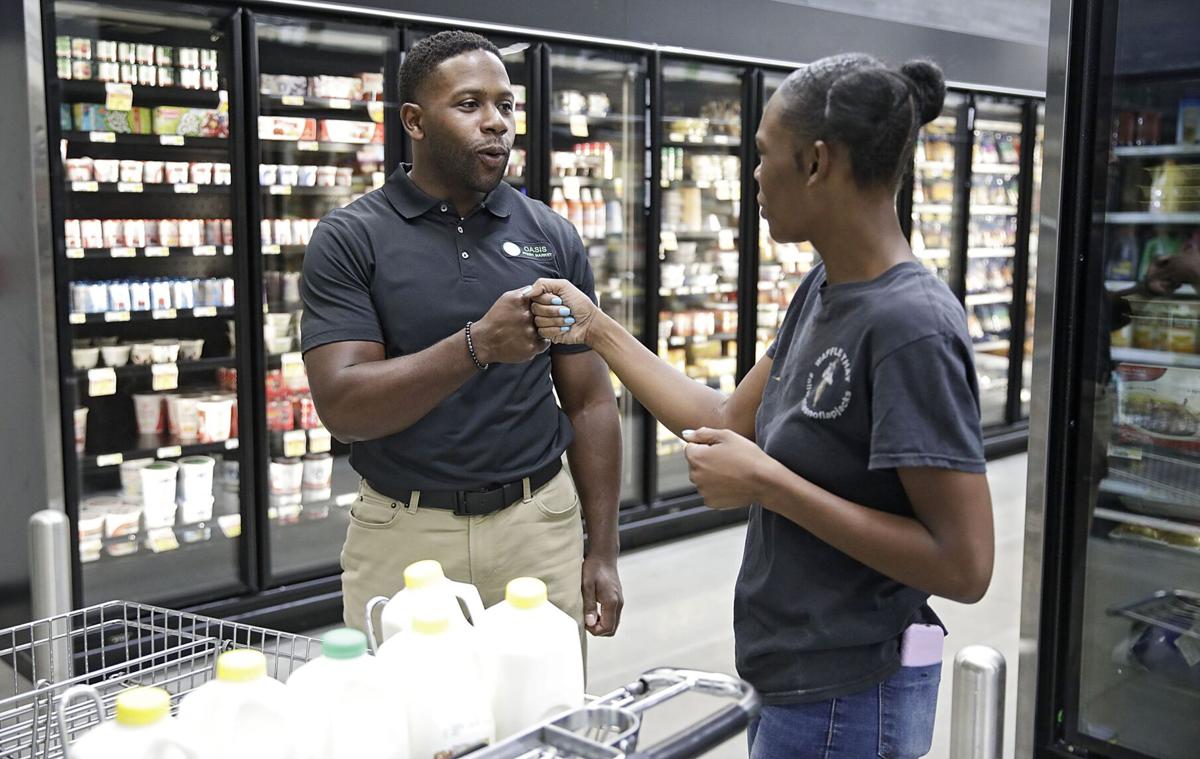 Owner A.J. Johnson fist-bumps customer Angel Ogundare as she shops at Oasis Fresh Market on Friday. Ogundare works at Waffle That and was buying items for the restaurant. 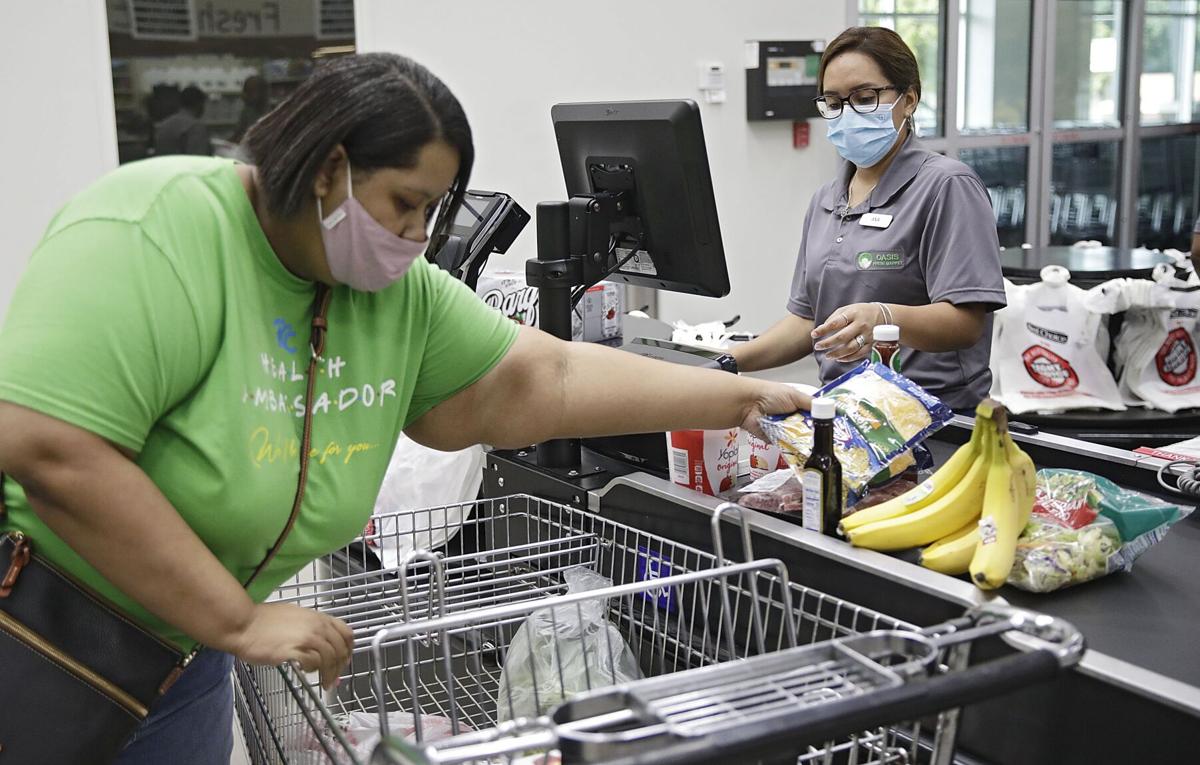 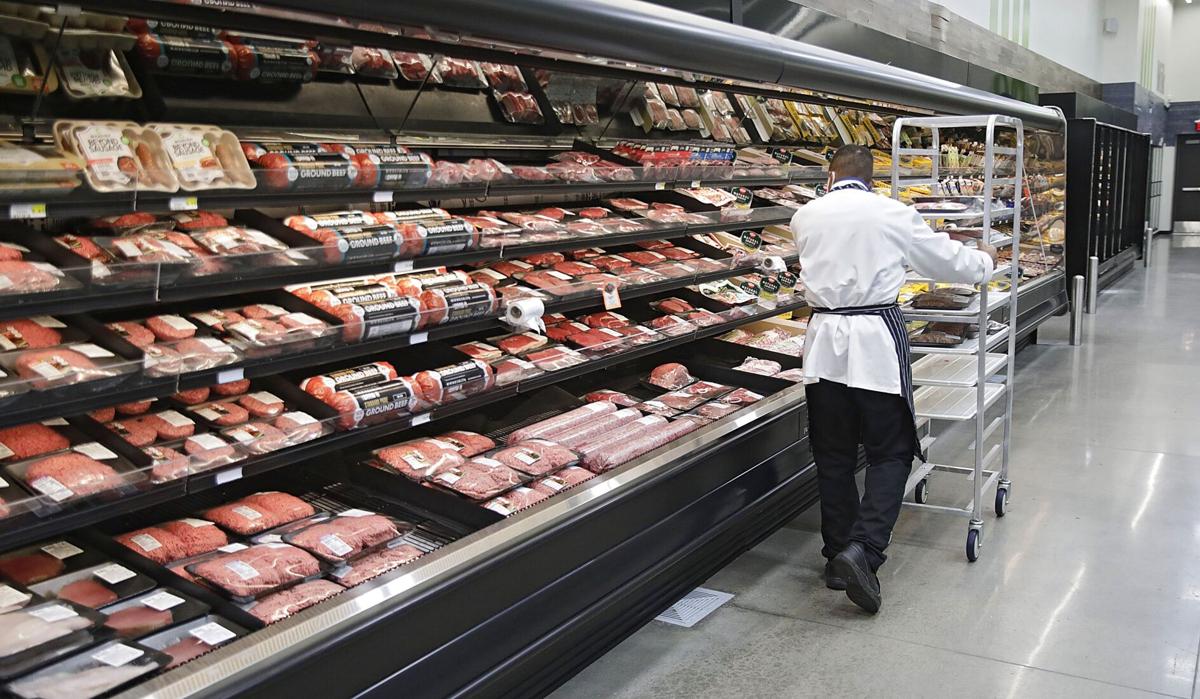 Torrance Alexander works in the meat section at Oasis Fresh Market on Friday in Tulsa. 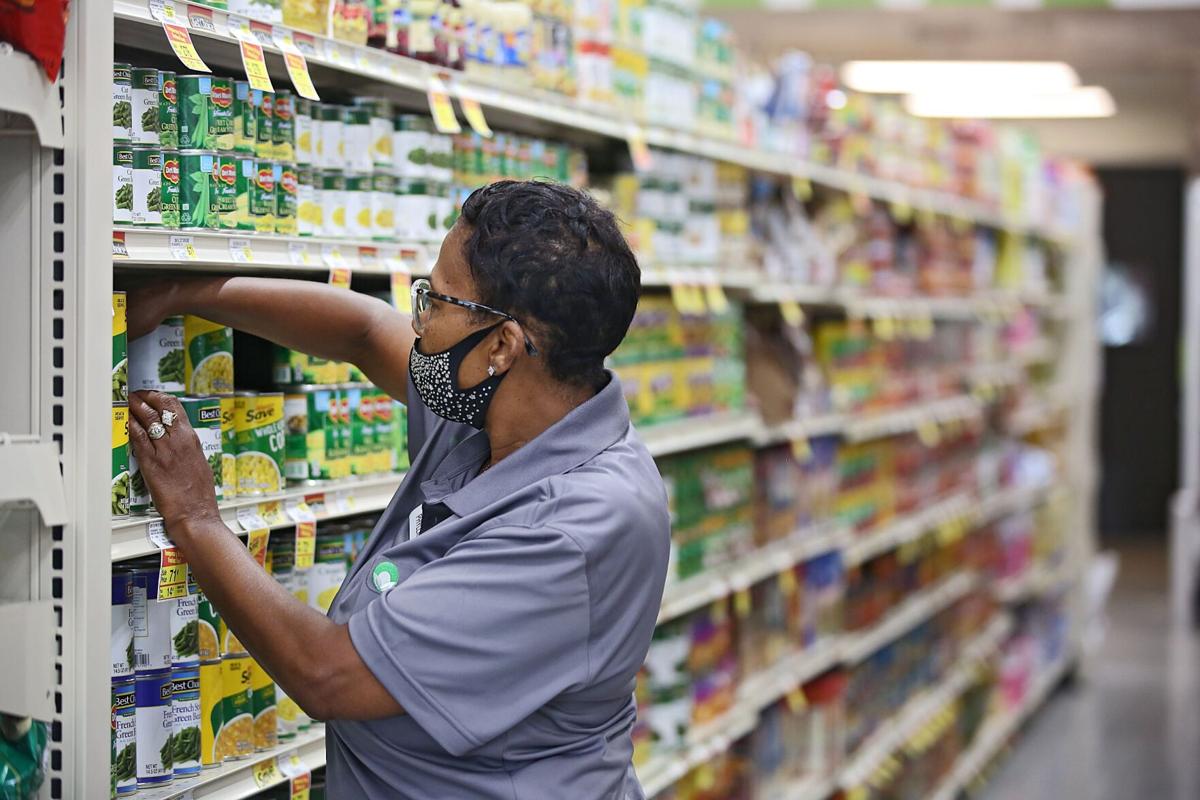 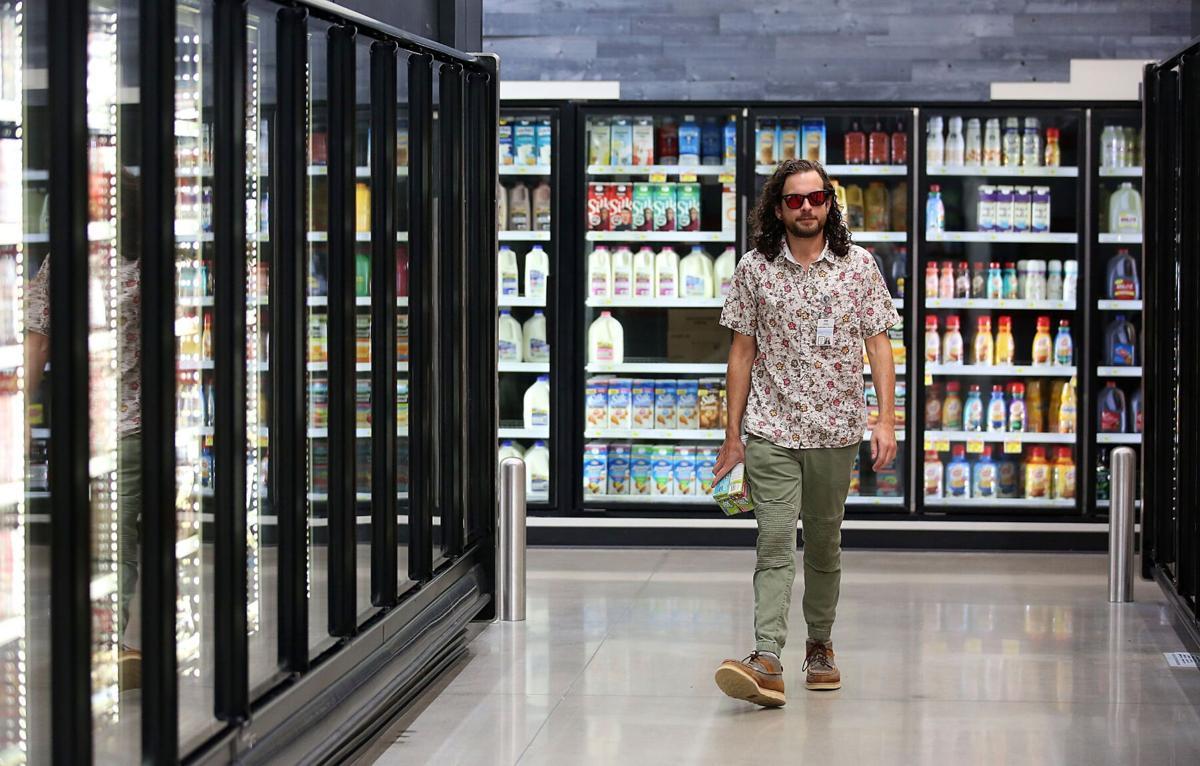 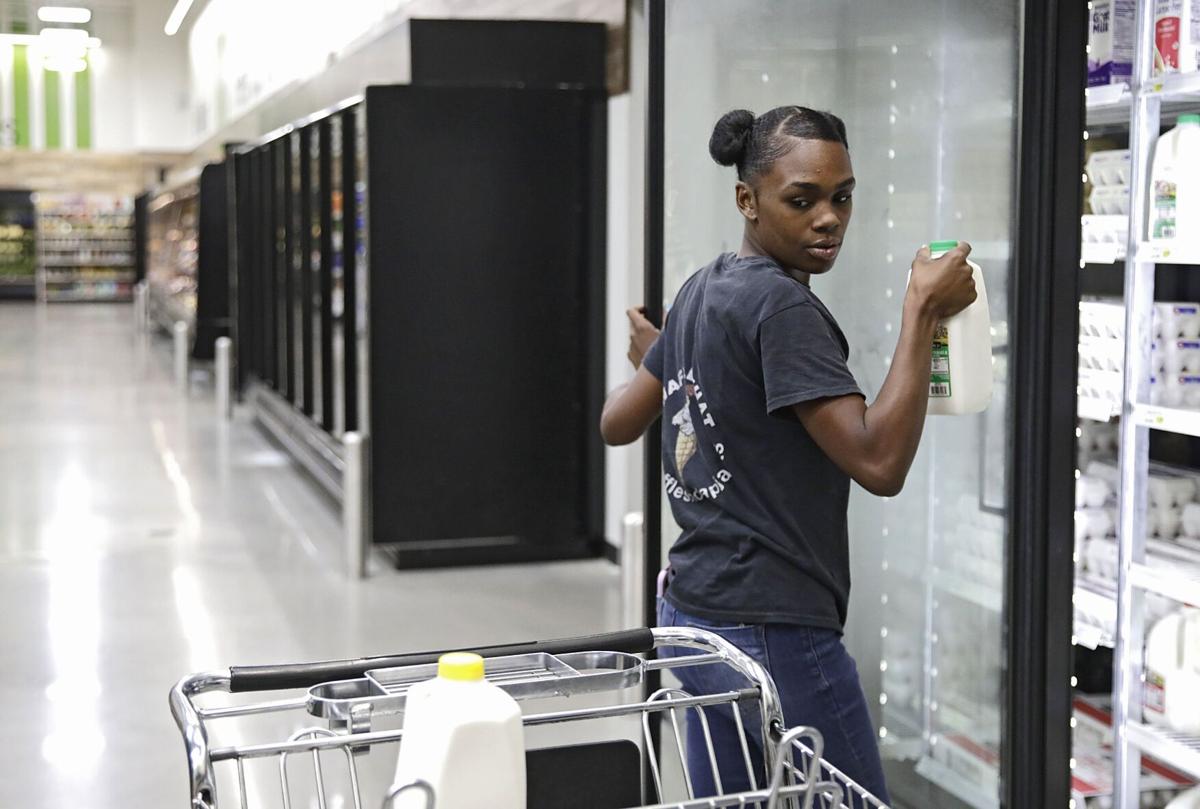 Angel Ogundare buys items for her job at Waffle That while shopping at Oasis Fresh Market on Friday.

Oasis Fresh Market debuted to copious fanfare in mid-May, with backers confident it had the framework to be a long-term success in an area not known for economic stability.

Three months into the project, advocates say the store is meeting those expectations.

“If trash is blowing across the parking lot, you see people pick it up. That’s what we want, because the success of the grocery store doesn’t depend on me. Welcome to your neighborhood grocery store. This is theirs. I am just fortunate to be a catalyst with some amazing people that brought this together.”

The roughly $5 million, 16,500-square-foot store on North Peoria Avenue was built to target the area’s food desert. Before Oasis arrived, 93% of the population in City Council District 1 had limited access to fresh, affordable and quality food, compared to 19% of other Tulsans, data showed.

But of equal value to the groceries are the wraparound services the store provides, Johnson said. Every first Saturday of the month, about a dozen or so vendors congregate to offer tips on things such as job training, proper diet, financial literacy and health care.

“It’s those things that bring about true community transformation,” Johnson said. “We could be just a grocery store and be fine. But we want to know the health of the community in terms of health care, in terms of the mindset, the thought process, how the family unit is working, how they are dealing with real issues.

“That’s the unique thing about our grocery store. We’re meeting people right where they are with real solutions.”

“It’s definitely what we needed in the community,” she said. “I am so happy and blessed because I get to walk right over there for lunch.

“… It’s not just a grocery store. It’s a place where everyone comes together. Since that grocery store has been there, you just see the good energy, the happy energy. You just see a lot more smiling faces and you see people encouraged.”

Darrell Knox heads the family-owned Sweet Lisa’s Cafe, which has operated eight years in The Shoppes on Peoria, where the market is stationed.

“They couldn’t have named this store more appropriately,” Knox said while sitting at a booth in the cafe. “It’s definitely an oasis in this food dessert.”

“It’s made an impact here on me locally, and in the community as a whole. It’s been a jewel.”

Operated by the majority-Black-owned Eco Alliance Group, Oasis, the market, Knox says, benefits from the leadership of Johnson, who formerly served as executive director of the Tulsa Dream Center and administrative pastor at Victory Church.

“It’s all about the management,” Knox says. “They’ve got the right people. ... A.J. was well-known with the Dream Center, with Victory and all that he had done in the community. I just think that people really have gotten behind him and the store.

“I could say the jury’s out. But I really do believe it’s going to be successful. I really do.”

Rose Washington-Jones is board chair of the Tulsa Regional Chamber and CEO of TEDC Creative Capital, whose lending programs help small businesses. She and Tulsa District 1 City Councilor Vanessa Hall-Harper were among those instrumental in bringing Oasis to life.

Washington-Jones credits the charisma of Johnson — “He’s sort of an old-school grocer who knows everybody who walks in the store,” she says. — for help setting the market’s early course, which she says is good.

“The store is hitting what is considered the average weekly sales target,” says Washington-Jones, who declined to cite specifics. “I’ve had a couple of folks who I consider my coaches and mentors in the grocery space, and they are very pleased with the performance of the store.”

Her expectations for Oasis, however, go beyond one site.

“We want more than sustainability,” Washington-Jones says. “We want growth and we want scale. We do believe there are other parts of Tulsa that are ready for an Oasis.

“Believe it or not, people from across the nation have reached out to say, ‘we need help, as well.’ If we can find a way to build a system, I think we can make tremendous inroads in eliminating food deserts.”

Justin Boyd works under a mural at the Oasis Fresh Market Wednesday, May 12, 2021 in Tulsa, Okla. The grocery store is located at 1717 North P…

Tomatoes in the produce section at the Oasis Fresh Market Wednesday, May 12, 2021 in Tulsa, Okla. The grocery store is located at 1717 North P…

The groundbreaking of Project Oasis, a new grocery store at 1717 N. Peoria.

Xavier Kelley works in the produce section at the Oasis Fresh Market Wednesday, May 12, 2021 in Tulsa, Okla. The grocery store is located at 1…

The Oasis Fresh Market Wednesday, May 12, 2021 in Tulsa, Okla. The grocery store is located at 1717 North Peoria Ave.

Gina Green works in the meat department at the Oasis Fresh Market Wednesday, May 12, 2021 in Tulsa, Okla. The grocery store is located at 1717…

Xavier Kelley works in the produce section at the Oasis Fresh Market.

Gina Green works in the meat department at the Oasis Fresh Market at 1725 North Peoria Ave., which will have its grand opening Monday morning.

Xavier Kelley works in the produce section at the Oasis Fresh Market.

Owner A.J. Johnson speaks about the Oasis Fresh Market, which he hopes will be a community centerpiece on North Peoria Avenue.

Just $3 for 3 months for a digital-only subscription for a limited time. Subscribe in less than a minute: go.tulsaworld.com/june3

Sinkholes emerge with the 'unstoppable' receding of the Dead Sea

Sinkholes emerge with the 'unstoppable' receding of the Dead Sea

Owner A.J. Johnson fist-bumps customer Angel Ogundare as she shops at Oasis Fresh Market on Friday. Ogundare works at Waffle That and was buying items for the restaurant.

Torrance Alexander works in the meat section at Oasis Fresh Market on Friday in Tulsa.

Angel Ogundare buys items for her job at Waffle That while shopping at Oasis Fresh Market on Friday.