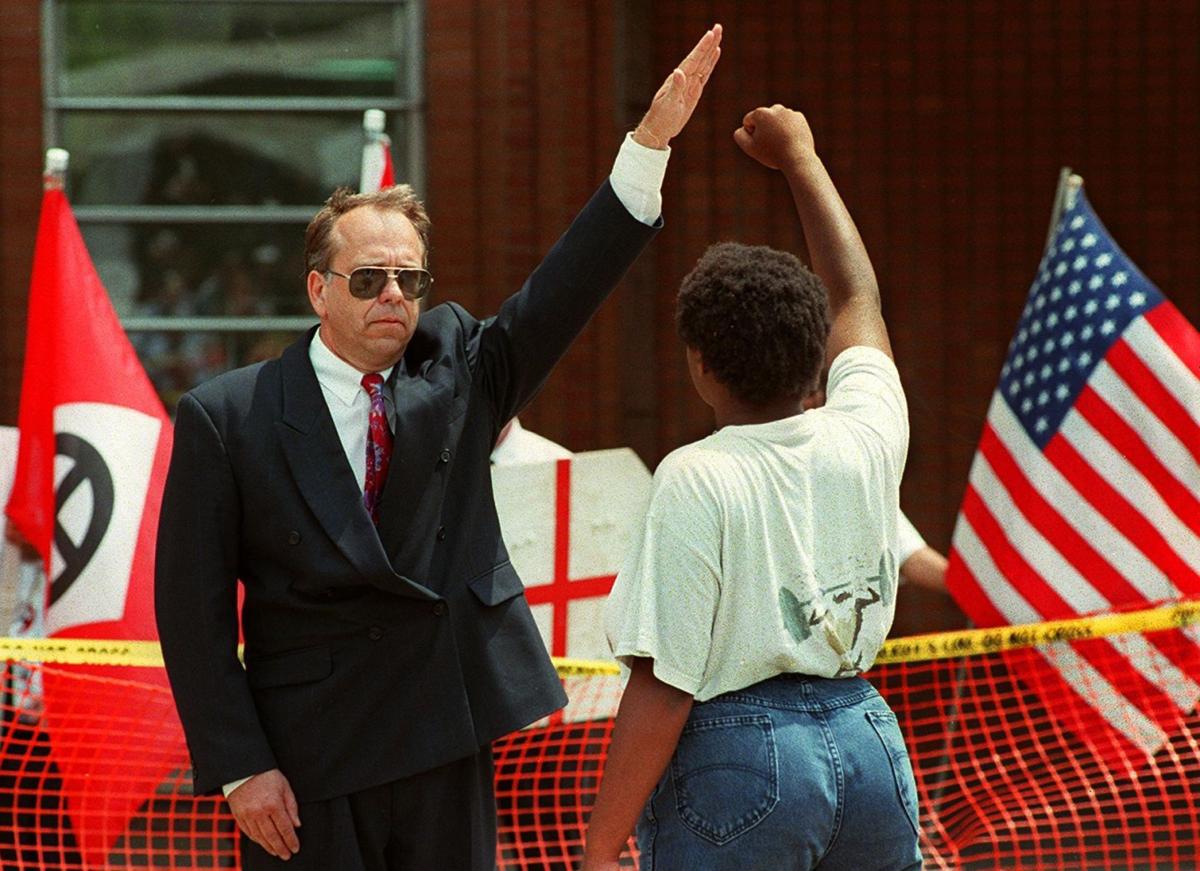 Thomas Robb, the national director of the Knights of the Ku Klux Klan, and Tiffaeny Lanigan square off during the Klan rally at the Tulsa County Courthouse plaza on May 4, 1996. Tulsa World file 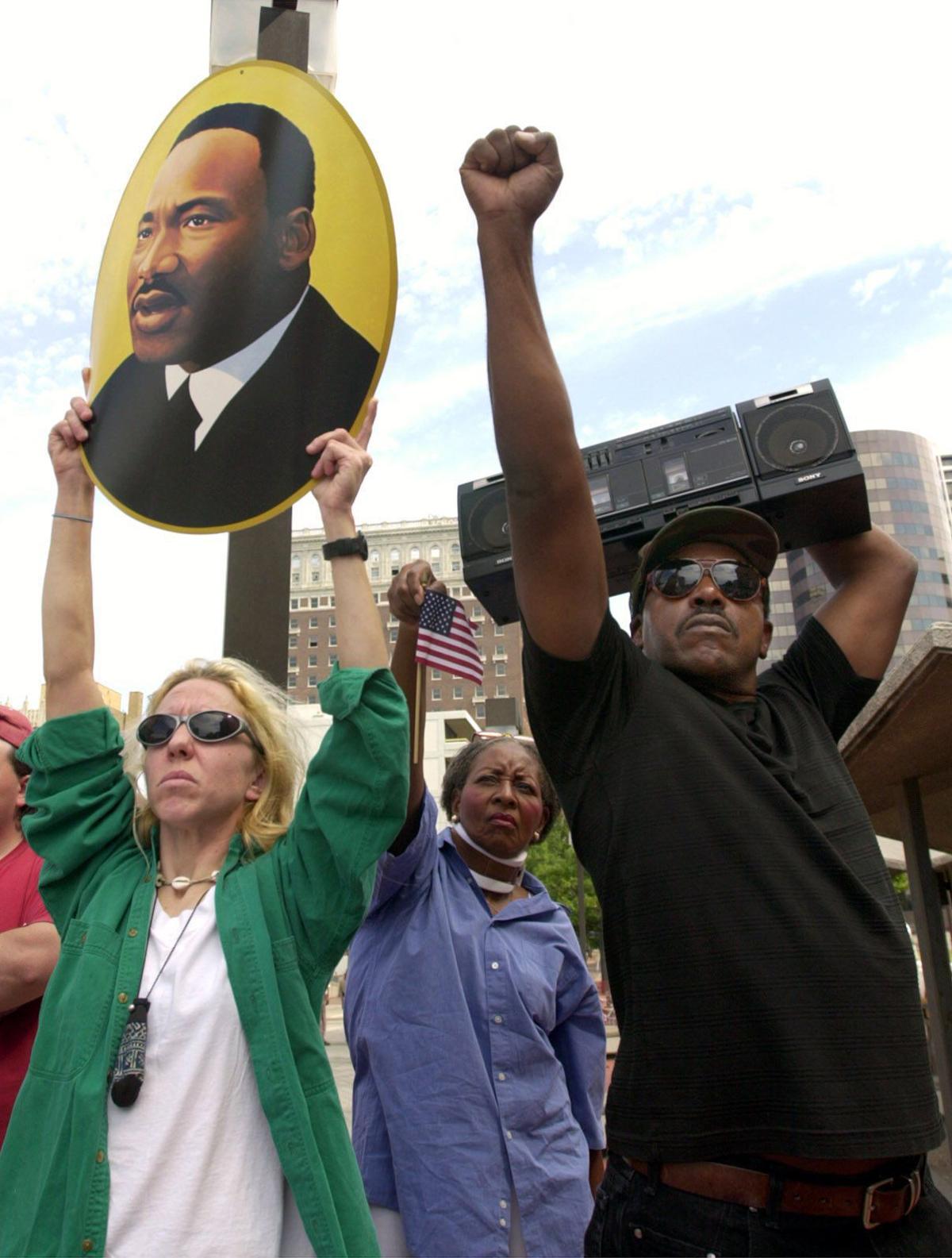 Protesters Diane Drennan, (left) Marcella Butler and Andrew Burkes, all of Tulsa, show opposition to the Ku Klux Klan during a rally at Oakley Plaza in Tulsa on Sept. 30, 2000. Burkes played Martin Luther King's "I Have a Dream Speech" as Klan members spoke to the crowd. World file

The headline said it all:

The 17 robed Ku Klux Klan members who staged a recruitment rally at Oakley Plaza in downtown Tulsa on Sept. 30, 2000, attracted only 40 supporters.

About 75 protesters gathered 150 feet away, with two chain-link fences separating the groups.

“This was a big waste of time,” concluded one protester. “I can’t hear them very well and they probably can’t hear us. Not that they’d listen anyway. I suppose you shouldn’t go to something like this hoping that you’d get your point across.”

It was Tulsa’s third KKK visit in four years. Authorities and religious leaders had encouraged people to stay away.

“We appreciate the community for making this a non-event,” said Tulsa Police Officer Lucky Lamons.

It was a far cry from a 1996 visit by an Arkansas-based KKK group. That rally drew 410 people to Oakley Plaza between the Tulsa County Courthouse and the Central Library, according to Undersheriff Bill Thompson. And 360 of those spectators appeared to be anti-Klan protesters, he said.

Tulsa County officials had approved the request to hold the KKK rally on May 4, 1996, with Commissioner Bob Dick saying, “They have a right to assemble under the Constitution, and it doesn’t make a difference whether you agree with them or not.”

The KKK group's leader said the purpose of the rally was to support “the white Christian working man and woman in America” who had been betrayed by politicians. He cited the North American Free Trade Agreement as an example.

City leaders quickly organized their own events to draw attention away from the Klan rally. Tulsa Mayor Susan Savage sent letters to 4,000 groups, businesses and individuals announcing a unity gathering to be held at the River Parks Amphitheater on the west bank of the Arkansas River.

In an interview with the Tulsa World, Savage said that the event would emphasize “that we are a community of tolerance and that we deplore groups that promote hate.”

“We don’t want to see innocent people in our community hurt or anybody in this community arrested. We hope they will not do anything to give credibility to what the Klan says our people are all about,” said Tulsa City Councilor Joe Williams.

A report by Klanwatch, which monitors white supremacists, states that such groups are skilled at turning confrontations to their advantage and gloat "that the violence came from the protesters, not the hate group."

On the day of the rally, about 200 law enforcement officers surrounded the courthouse plaza. Armed officers perched on the courthouse roof. City and county mounted patrols lined Denver Avenue.

A tense stand-off occurred when a black protester, Tiffaeny Lanigan, slipped through a barricade and raised her fist in a “black power” salute a few feet from the KKK members. Klan leader Thomas Robb approached her and raised his arm in a “heil, Hitler!”-type salute.

The situation was defused after a few moments when Undersheriff Thompson, a white man, and Deputy Willie Lewis, a black man, approached Lanigan and spoke quietly with her. Then, Lewis put his arm around Lanigan and led her back behind the barricade.

Meanwhile, pews at Mount Zion were filled with blacks and whites, young and old and people of all faiths. And later, 1,200 people attended the River Parks unity rally.

“I learned from Joe Williams and others that by going down there … I would be giving the KKK exactly what they wanted, and I would not be solving anything,” Antonio Talbert, who had planned to protest, told the congregation at Mount Zion.

Savage praised the crowd at the unity gathering, saying, “We have faced up to hate, prejudice and ignorance, and we’re a stronger community now for it.”

Later that day, about 50 Klan supporters gathered on a hilltop near 51st Street and 49th West Avenue. After dark, they donned white robes and hoods, stood in a semi-circle and burned a 15-foot cross amid shouts of “white power.”

Tulsa officials didn’t bother to hold their own event when a group of Alabama KKK members scheduled another cross-burning on the same hilltop on July 26, 1997. It drew about 70 people and was uneventful, authorities said.

Across town, young Tulsans gathered at All Souls Unitarian Church and pledged to support tolerance, acceptance and love. And at Veterans Park, a group of Goths – young people known for their dark, punk-style clothes and colorful hair – lit candles, read poems and prayed.

“If we only changed one person’s mind, it was worth it,” said one.

UK coal mine plan tests government ahead of COP26

UK coal mine plan tests government ahead of COP26

Tulsa received unwanted visits from the Ku Klux Klan in 1996, 1997 and 2000. The city has its own dark history with the hate group.

Four men claiming to be associated with the Ku Klux Klan tried to stop the show on Jan. 30, 1972, during the last of six performances attended by some 10,000 people in Tulsa.

Thomas Robb, the national director of the Knights of the Ku Klux Klan, and Tiffaeny Lanigan square off during the Klan rally at the Tulsa County Courthouse plaza on May 4, 1996. Tulsa World file

Protesters Diane Drennan, (left) Marcella Butler and Andrew Burkes, all of Tulsa, show opposition to the Ku Klux Klan during a rally at Oakley Plaza in Tulsa on Sept. 30, 2000. Burkes played Martin Luther King's "I Have a Dream Speech" as Klan members spoke to the crowd. World file