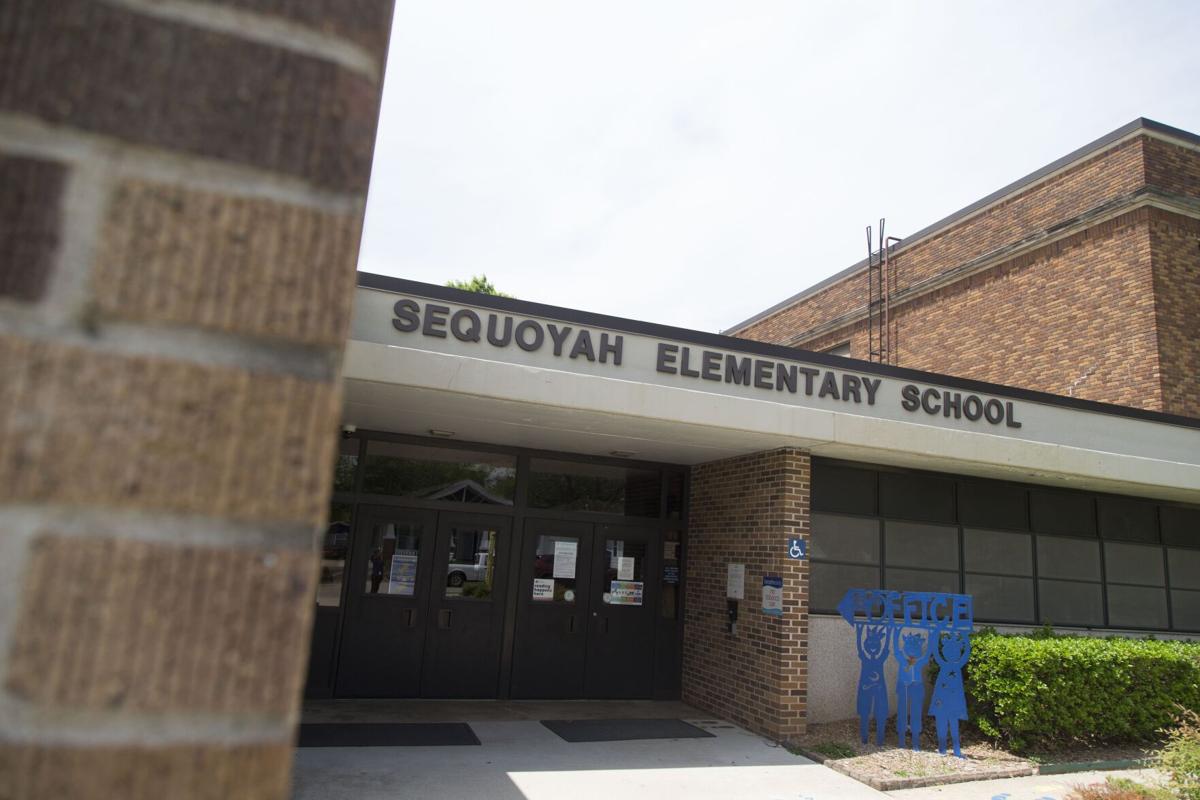 Sequoyah Elementary School is one of eight sites that would receive a full interior renovation as part of Proposition 1 of Tulsa Public Schools’ five-year $414 million bond proposal that will go before voters on June 8. 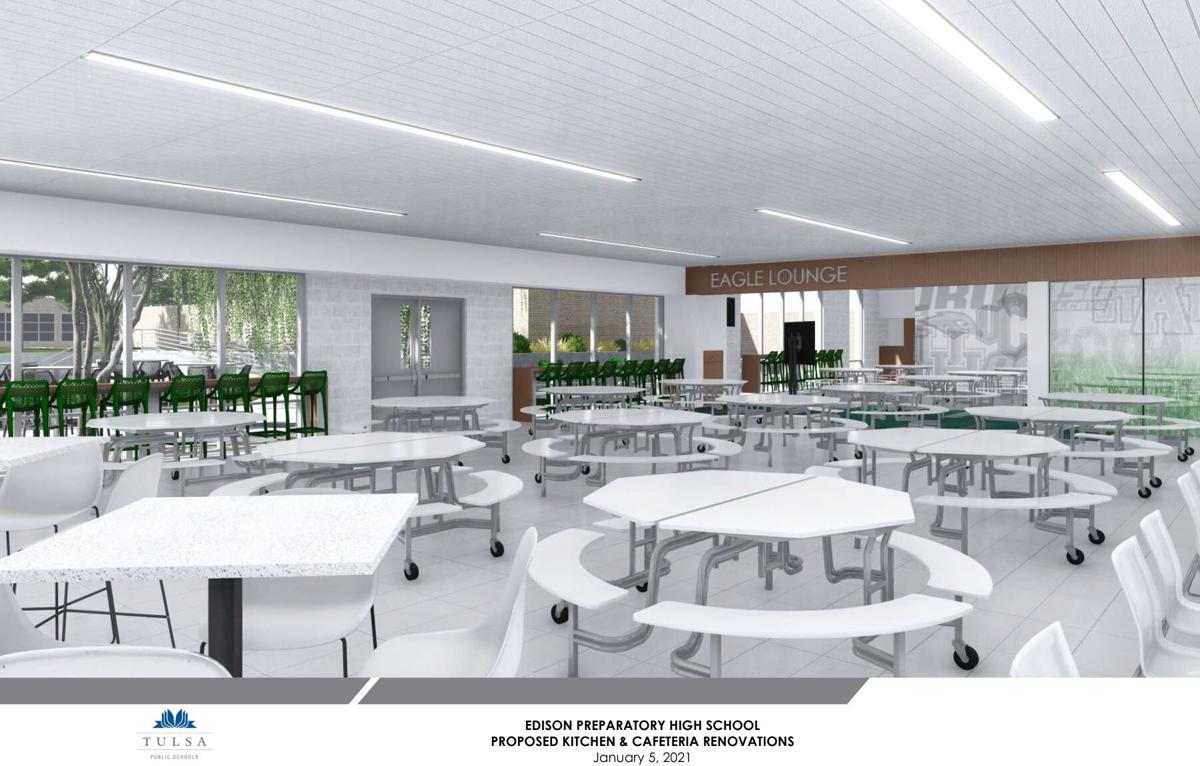 An artist rendering depicts cafeteria renovations that would be made at Edison High School, if district voters approve Proposition 1 of Tulsa Public Schools bond proposal. 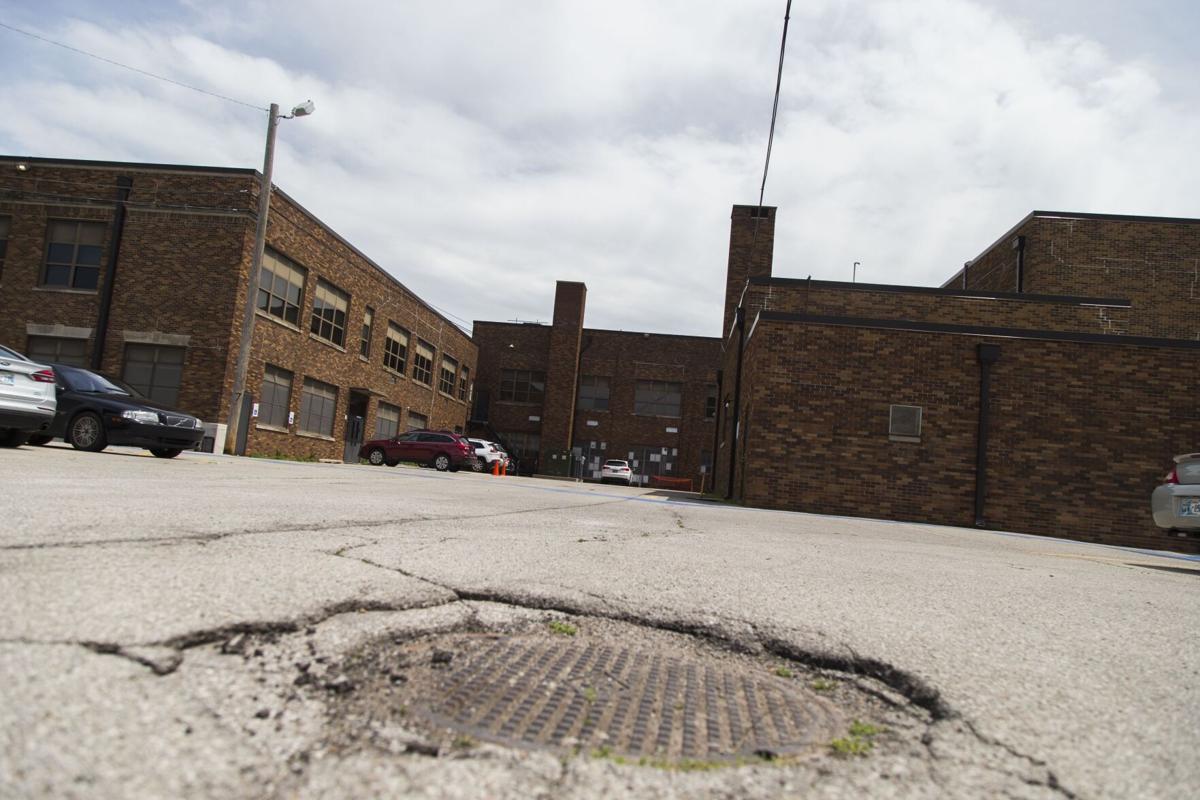 Repairs and exterior lighting are needed for the parking lot on the grounds of Sequoyah Elementary School. 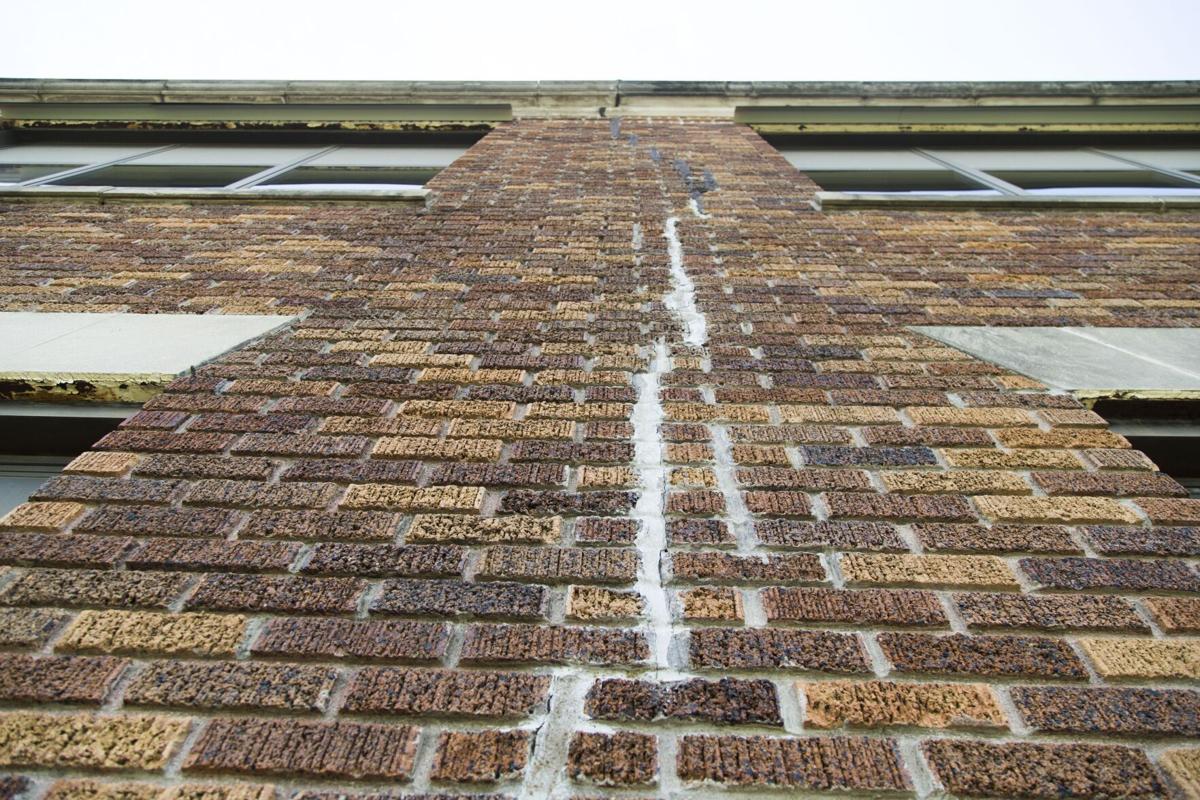 Cracks run up the wall of Sequoyah Elementary School. 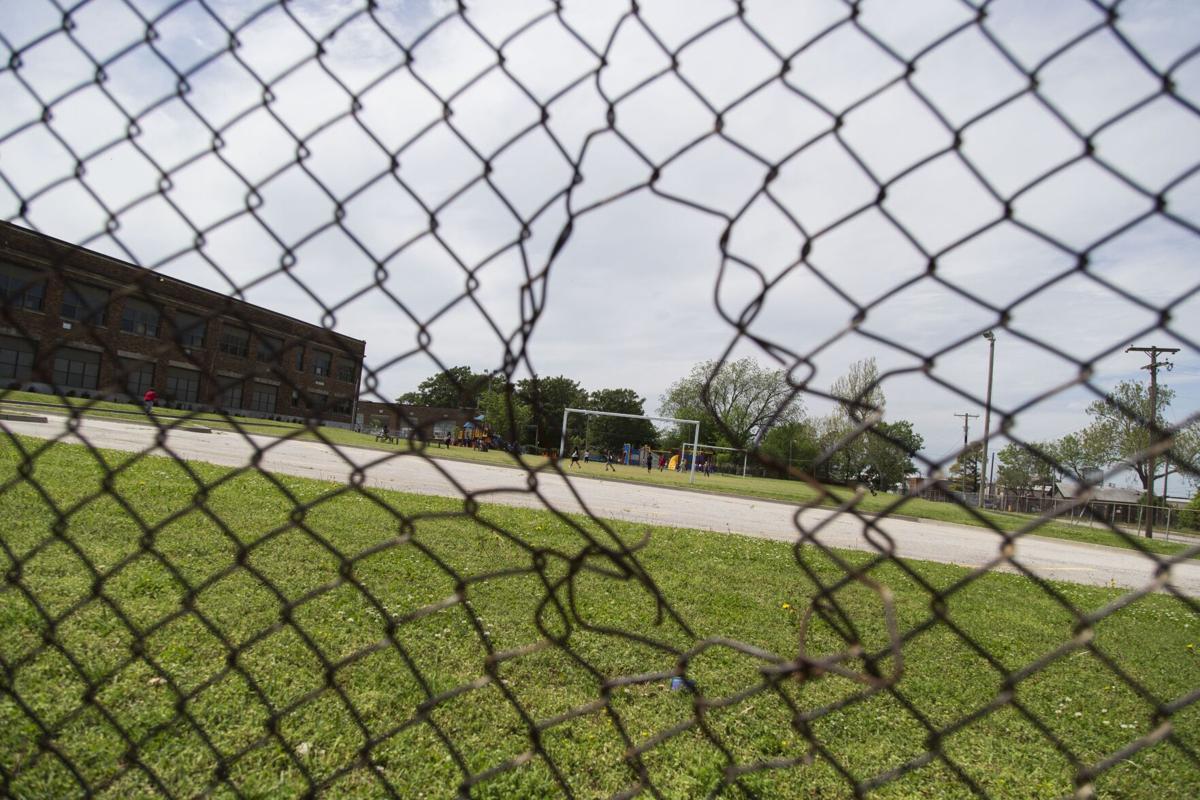 A damaged fence at Sequoyah Elementary School in Tulsa. 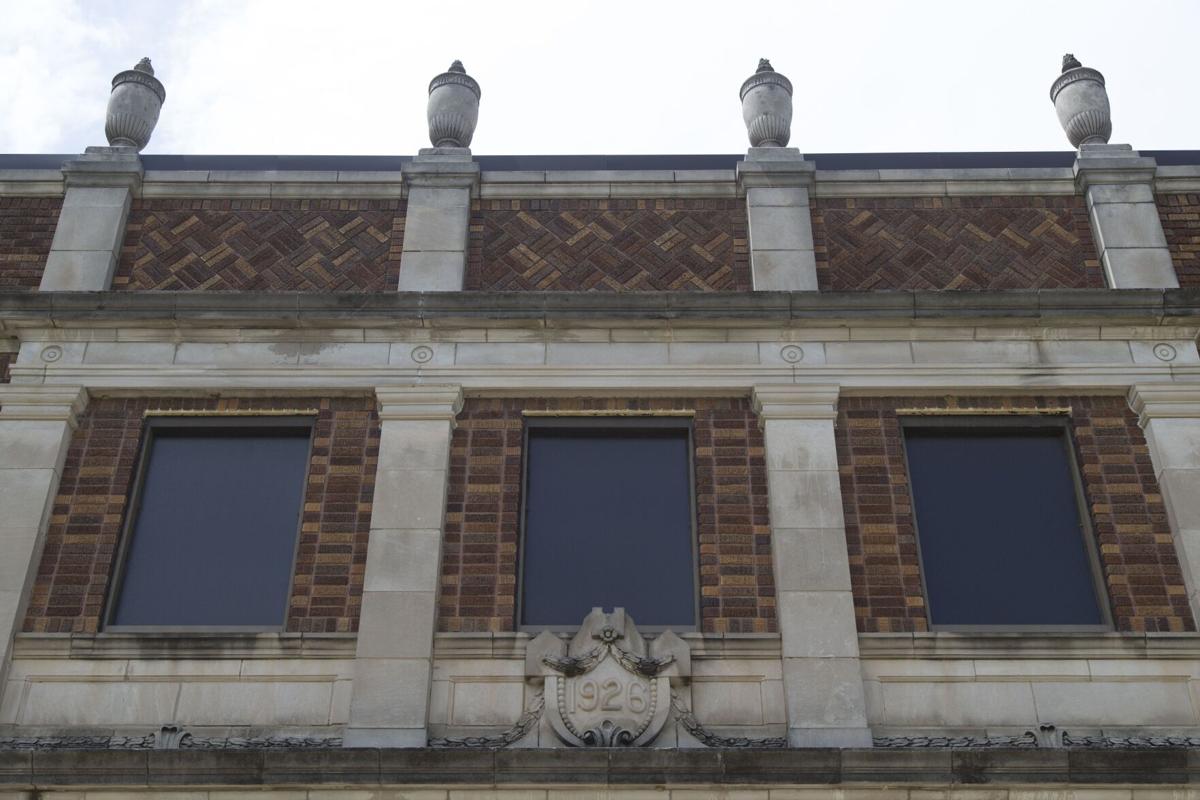 Sequoyah Elementary School, built in 1926, is showing its age. It is one of 10 TPS campuses that are more than 90 years old. 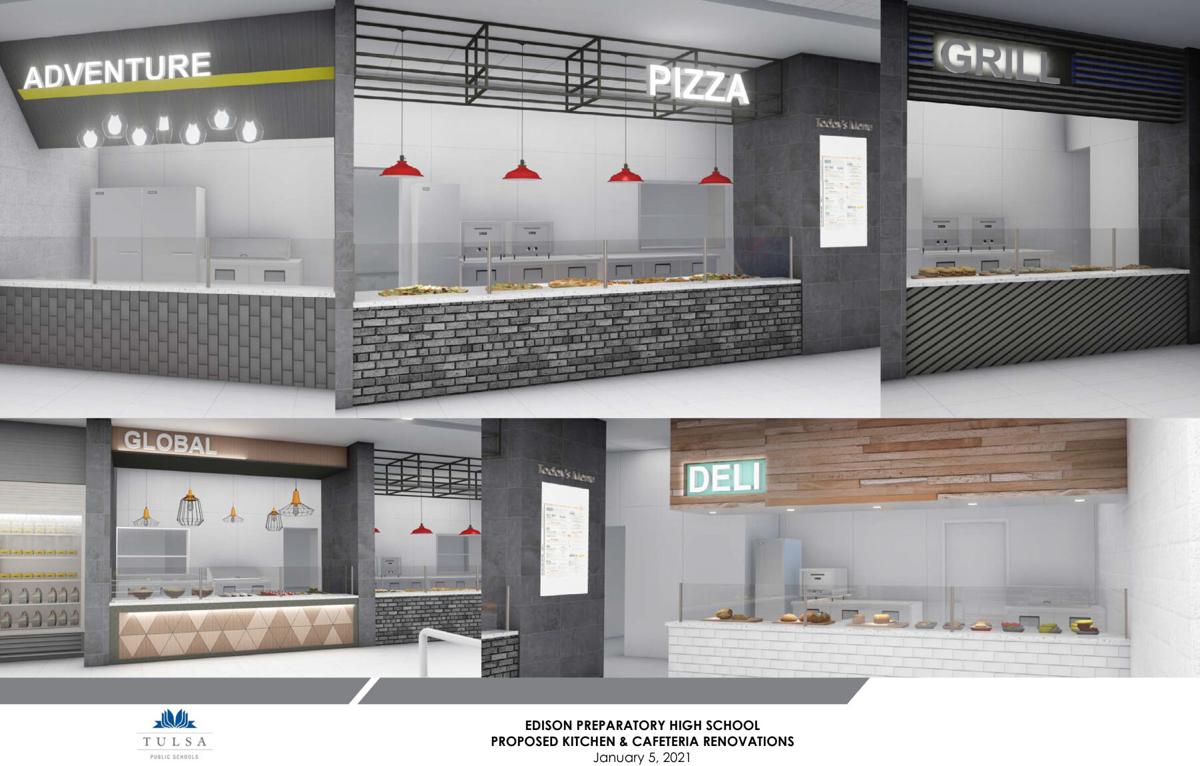 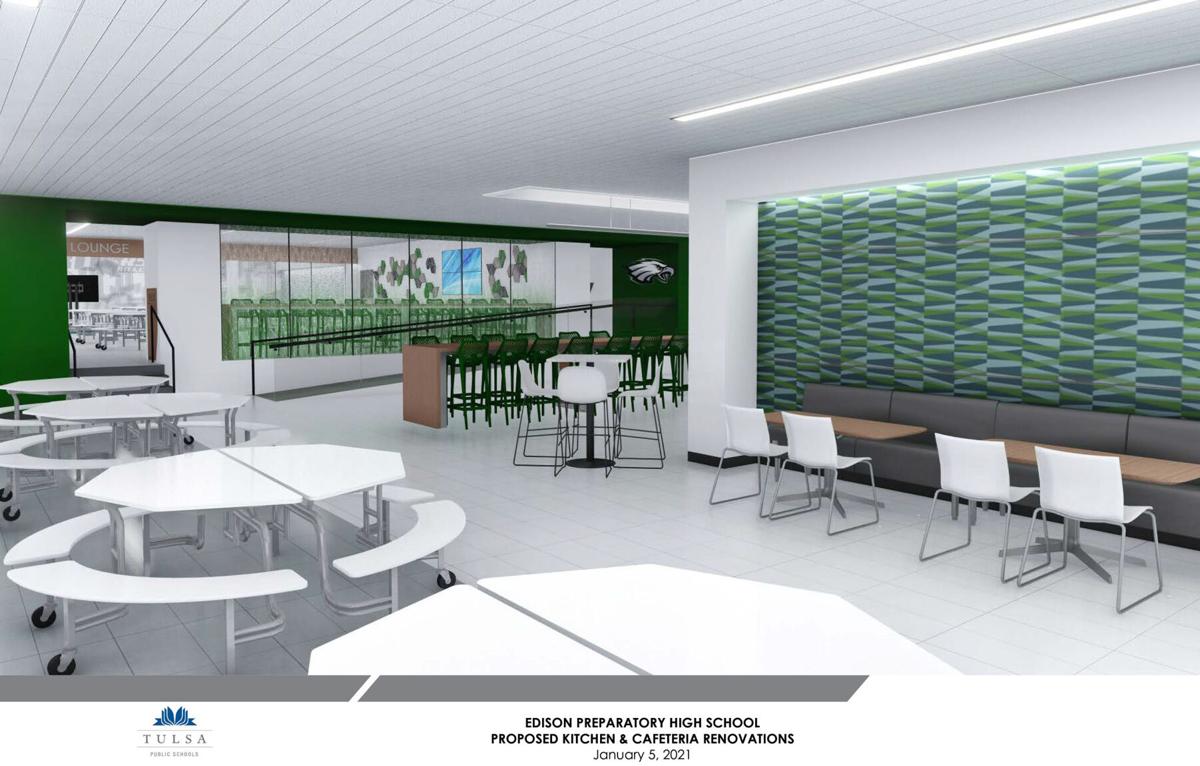 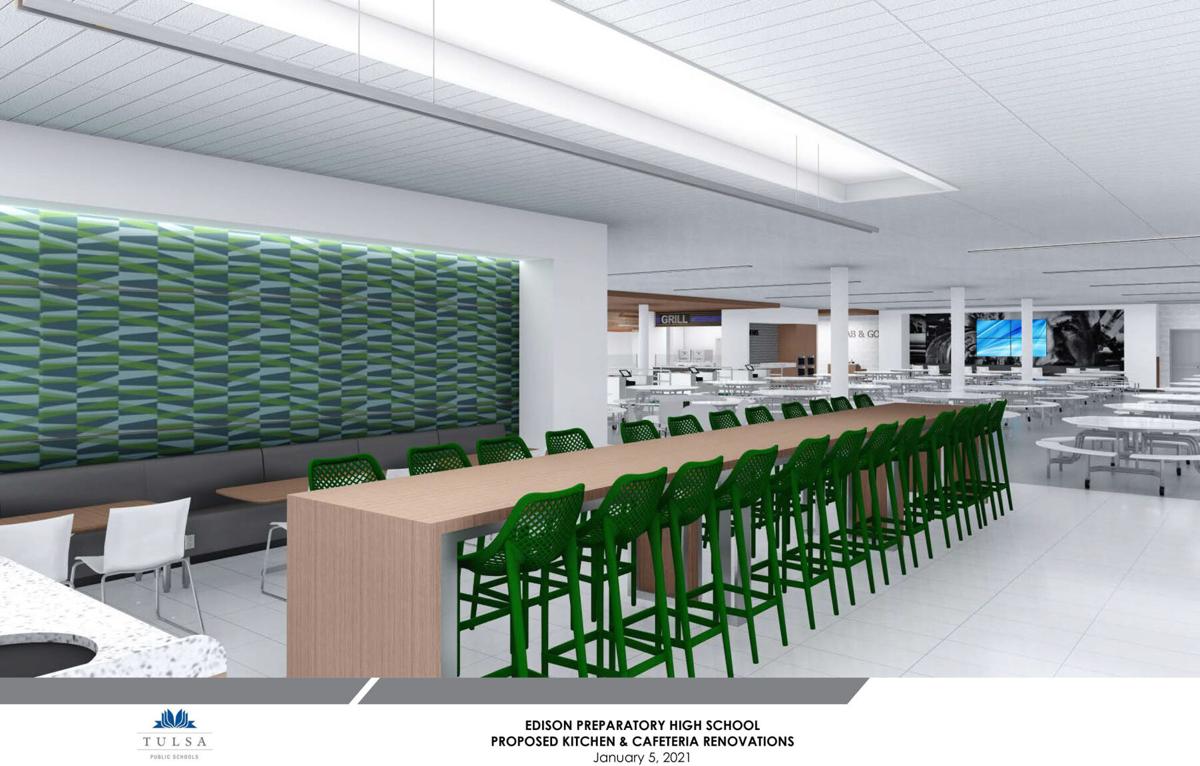 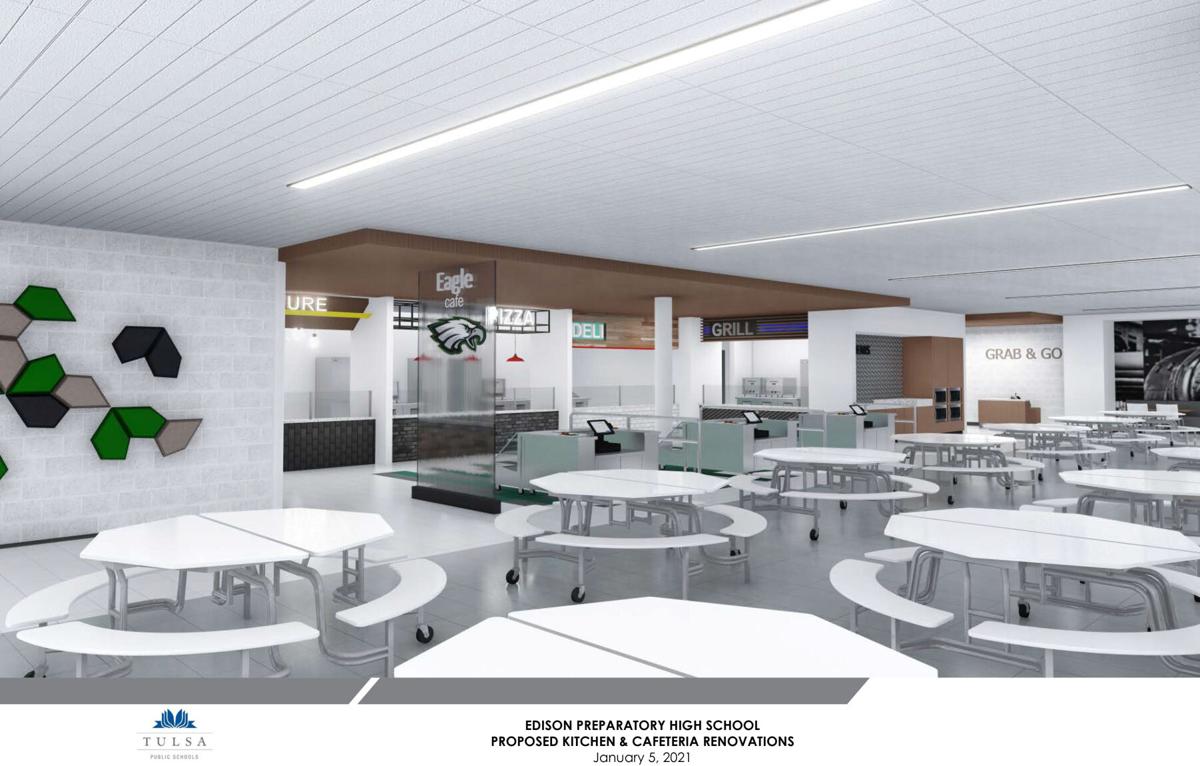 Raye Nero could do without the cracks and water damage to her office’s walls.

Nero is the principal at Sequoyah Elementary School, one of eight sites that would receive a full interior renovation as part of Proposition 1 of Tulsa Public Schools’ five-year $414 million bond proposal that will go before voters on June 8.

“The building that serves my students is deteriorating,” Nero said. “This bond would be able to fix the infrastructure of our school to where we can compete with other schools.

“This community deserves that.”

Greg Shaw is the chairman of the subcommittee within the Citizens’ Bond Development Committee that helped put together Proposition 1.

Among the factors Shaw’s subcommittee took into consideration were ensuring equity across the district, including when each of the campuses last had major upgrades or substantive maintenance work done, such as new windows or a roof replaced.

“With 60% of TPS’ schools at 50 years or older, these investments into roofing, exterior maintenance and accessibility are crucial,” he said.

To that end, the proposition includes $44.1 million for interior renovations at Sequoyah and seven other schools across the district: Bell, Burroughs, Hawthorne, Skelly Upper and Walt Whitman elementary schools; plus Thoreau Demonstration and Wayman Tisdale academies.

One of 10 TPS campuses that are more than 90 years old, Sequoyah’s current building, the former Cleveland Middle School, was built in 1926. Although Nero and the school’s staff were grateful to move into the space a decade ago as part of Project Schoolhouse, their current building’s age is starting to show. Along with water-damaged, cracked walls, the 95-year-old building consistently has plumbing issues because of its aging pipes.

“When you find a new house, you want to fix it,” Nero said. “We were so excited to move over from the old Sequoyah to Cleveland because it meant we could all be in the same building instead of having kids in 10 prefabs like we did over there.

“However, what we’ve found since we got here is that even though we baby this building and we love it, the infrastructure is falling apart.”

Proposition 1 also includes $7 million for parking lot improvements, something Nero and Jennifer Pense, the principal at Skelly Elementary School, both said would be welcome additions, in part for safety reasons.

Given the poor exterior lighting, both principals have encouraged their schools’ faculties to use the buddy system when leaving the building after dark. The proposal includes funding for additional exterior lights across the district.

“If you leave after sunset, it’s dark outside in our parking lot,” Pense said. “The only light is the small amount that comes from the building. I’m always telling my teachers if they are staying late, that they tell someone or take a buddy with them when they leave.”

The proposal also includes $18.3 million for new kitchen equipment and cafeteria renovations for the district’s high schools that would allow for those areas to be multi-use spaces.

Edison High School has about 1,200 students and has a cafeteria that seats about 350, which means running three lunch periods daily in order to accommodate everyone. In order to maintain social distancing requirements, school officials have also had to open up the gymnasium for student diners.

Along with funding a new roof, the bond package would pay for the midtown school to get an updated, expanded cafeteria and new kitchen equipment, including replacing its 10 standalone refrigerator/freezers with a walk-in freezer.

“We’ve been cooking in the same kitchen with the same appliances since this building opened in the 1950s,” Principal Clay Vinyard said.

The proposal also includes $3.9 million for repairs and maintenance to HVAC systems across the district. Originally, that line item was almost $55 million, but was offset by $51 million in federal COVID-19 relief funds. It also allowed the committee to reduce the length of the bond by a year while still providing full or partial system replacement at 37 campuses across the district.

“We were considering a six-year bond,” Shaw said. “With that money, we were able to reduce it (the bond package) by that amount, maintain the five-year length and keep the rates where they need to be.”

As per state law, school bond proposals require a supermajority of the votes cast in order to pass. Should TPS’ bond package be approved, it would not raise property tax rates. Instead, it would replace the 2015 bond, which is scheduled to be retired in August.

The voter registration deadline is May 14. Absentee ballot requests must be received by 5 p.m. on June 1. Early voting is scheduled for 8 a.m. to 6 p.m. on June 3-4.

In advance of Tulsa Public Schools upcoming bond election, the Tulsa World will run a five-part series. Along with breaking down each of the four propositions, it will look at how the district has spent its 2015 bond money.

Ten online information sessions about the bond package are scheduled for May and early June. Interpretation services will be provided and registration is available through tulsaschools.org.

Biden: US troops won't be moving into Ukraine

Biden: US troops won't be moving into Ukraine

What are these weird looking 'spider formations' that were spotted on Mars?

What are these weird looking 'spider formations' that were spotted on Mars?

Zane Bennett, 19, was arrested on a complaint of manufacturing an explosive. His girlfriend, Mariah Davis, is accused of shoplifting Lego sets from a Walmart near where she was stopped by police Monday.

Michael Overall: Is Yale Avenue really the most expensive road project in Tulsa history? It depends

The widening of 71st Street in the 1990s could still count as the costliest ever.

It's mutating every four to six months, Dr. Aaron Wendelboe said, continually finding the populations that are most vulnerable. "The big unknown then is ... this apparent reduced immunity again."

Sequoyah Elementary School is one of eight sites that would receive a full interior renovation as part of Proposition 1 of Tulsa Public Schools’ five-year $414 million bond proposal that will go before voters on June 8.

An artist rendering depicts cafeteria renovations that would be made at Edison High School, if district voters approve Proposition 1 of Tulsa Public Schools bond proposal.

Repairs and exterior lighting are needed for the parking lot on the grounds of Sequoyah Elementary School.

Cracks run up the wall of Sequoyah Elementary School.

A damaged fence at Sequoyah Elementary School in Tulsa.

Sequoyah Elementary School, built in 1926, is showing its age. It is one of 10 TPS campuses that are more than 90 years old.