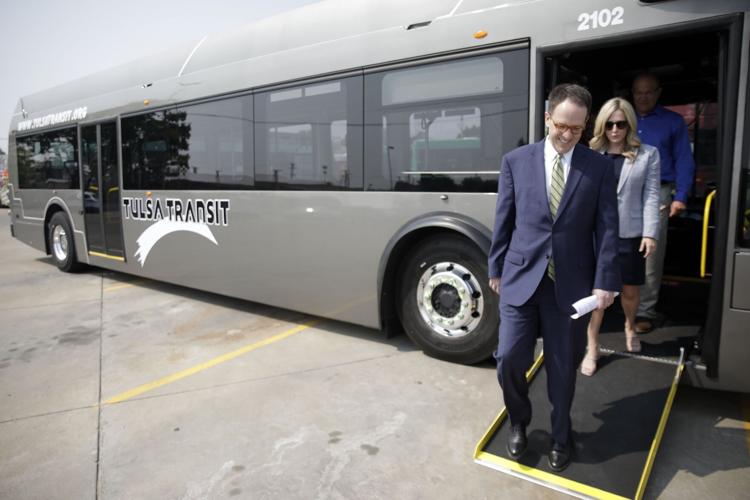 Tulsa Mayor G.T. Bynum tours a new electric bus before a news conference at Tulsa Transit on Tuesday. Four electric buses are being added to the metro bus fleet. 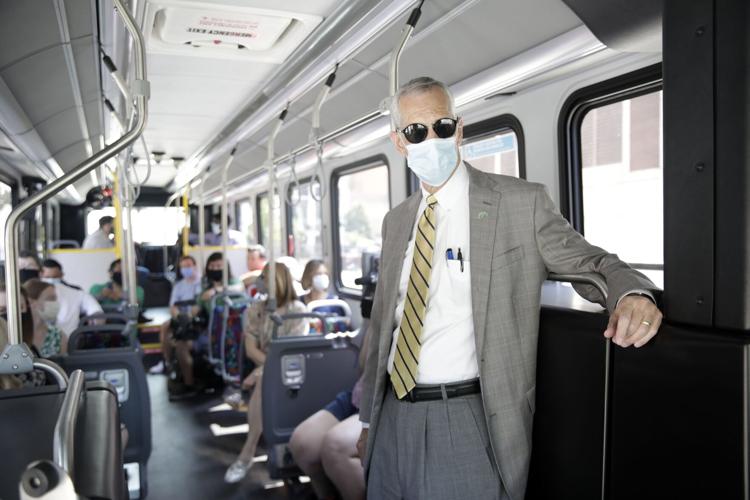 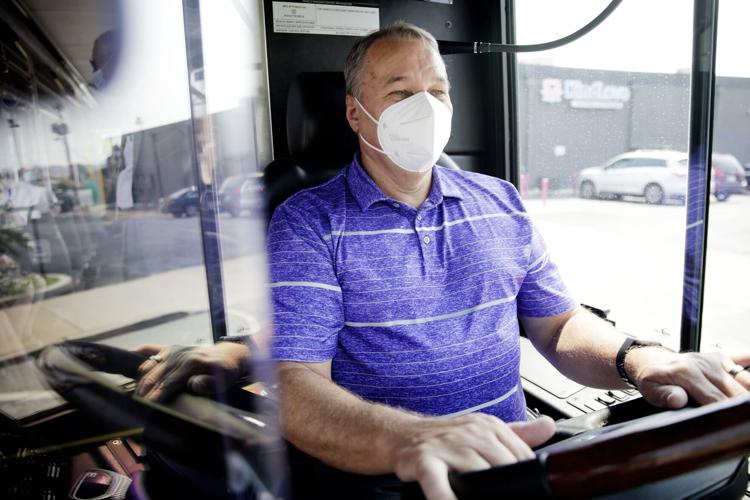 Randy Cloud, director of maintenance for Tulsa Transit, takes a turn at the wheel of a new electric bus on Tuesday. 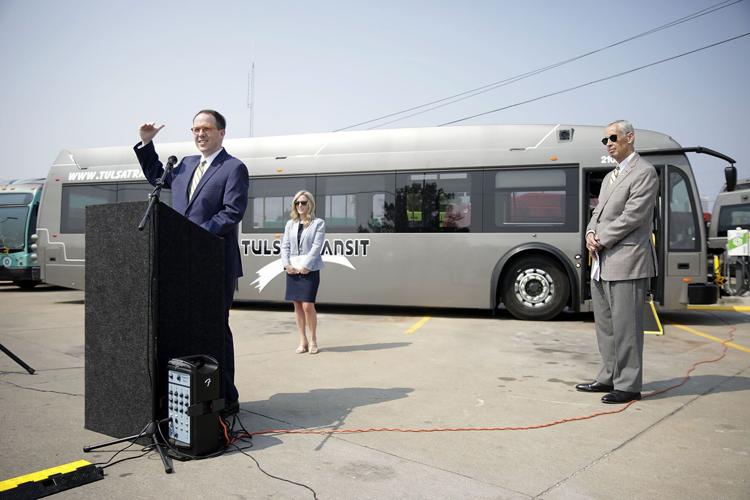 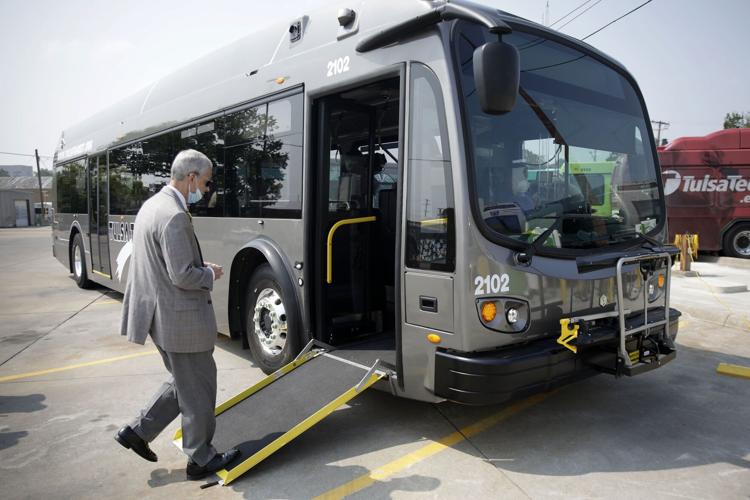 Tulsa Transit and city leaders unveiled a new electric bus on Tuesday that is among four that will be added to the metro bus fleet.

The bus was made available Tuesday for city officials and members of the news media to see and ride.

“We’re excited to not only modernize our fleet … but also help the environment,” said Ted Rieck, general manager of the Metropolitan Tulsa Transit Authority.

“The electric buses really don’t pollute at all,” he said.

“I know many of the bus drivers are excited about the vehicles. They accelerate a lot faster than a traditional bus,” Rieck said, adding that the new buses’ braking system will last much longer than brakes on a traditional bus.

The electric buses are 40 feet long and can travel roughly 200 miles on a full charge.

“Adding electric buses to the transportation fleet is an effort to continue to stay green, lower emissions and provide a quieter commute for riders,” the city said in a news release.

“You think about where we’ve come in the last five years for public transit in Tulsa, … and it’s exciting,” Mayor G.T. Bynum said.

In addition to having relatively new natural gas buses, “now we will become a city with electric buses,” he said.

The buses cost about $569,000 each, with batteries that cost about $260,000 each, said Randy Cloud, director of maintenance for Tulsa Transit.

The buses have an expected 12-year lifespan, he said.

The new electric buses will not be on specific routes but will run periodically in all areas of the city, he said.

The city has 62 buses and 44 lift vehicles in operation, according to the Tulsa Transit website. The four new electric buses will replace older buses, Cloud said.

The Metropolitan Tulsa Transit Authority was formed in August 1968 by the city of Tulsa.

It was set up as a public trust to continue the operations of the private bus service that had been run by the Missouri, Kansas & Oklahoma bus company, MK&O Lines.

Tulsa Transit is overseen by a seven-member board of trustees. It has an annual operating budget of $18 million and has 180 employees.

Throwback Tulsa: A look back at riding the bus in Tulsa

The Mayor's Office and Police Department have proposed changing a city ordinance to make it easier for police to remove people obstructing sidewalks and other public rights of way.

Proposed ordinance would provide another tool for officers to deal with homeless people, deputy chief says

TPD Deputy Chief Eric Dalgleish tells councilors that police continue to hear from business owners and residents who are concerned about the homeless situation in the city.

Police chief says he 'can always use help,' but independent monitor is not the answer

City leaders aren’t close to establishing any kind of independent police oversight program, but the issue could become a subject of conversation again this year.

Officials say the ride has become too expensive to maintain and operate. It has not been part of the fair since 2019.

"For people to get the help they need, they aren’t going to get it sleeping on the sidewalk; they are going to get it” elsewhere, Mayor G.T. Bynum told the Tulsa City Council on Wednesday.

The project also calls for constructing The Beacon, a 42-story, mixed-use structure.

As the Supreme Court’s indication that it may be ready to overturn Roe v. Wade prompted nationwide protests, hundreds of pro-choice advocates …

“We have a bunch of city departments (attending), many of whom have Spanish speakers, who are going to be there to answer questions," Councilor Kara Joy McKee said.

Tulsa Mayor G.T. Bynum tours a new electric bus before a news conference at Tulsa Transit on Tuesday. Four electric buses are being added to the metro bus fleet.

Randy Cloud, director of maintenance for Tulsa Transit, takes a turn at the wheel of a new electric bus on Tuesday.