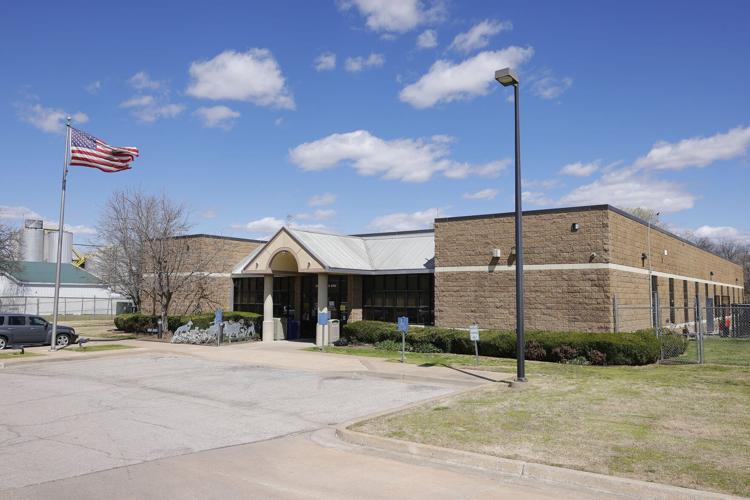 The city has a plan to replace the existing Tulsa Animal Welfare shelter at 3031 N. Erie Ave. with a new one at 36th Street North and Pawnee Drive. The existing shelter is not designed to keep diseases from spreading from animal to animal, but the new one will be, officials said. 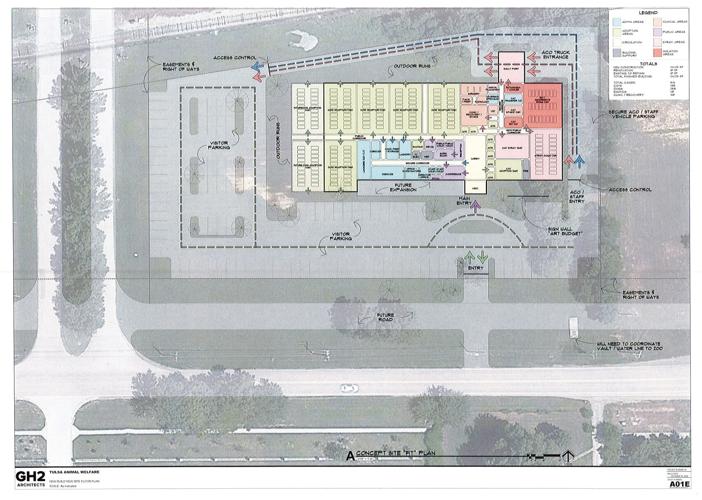 This design shows the city’s concept for replacing the existing Tulsa Animal Welfare shelter at 3031 N. Erie Ave. with a new one on 3.5 acres south of the zoo at 36th Street North and Pawnee Drive. The design is subject to change.

After listening to the Tulsa Zoo’s concerns about the city’s plan to build a new animal welfare facility nearer to the zoo, city officials have decided to move forward with the project.

“There is no plan to move to a different site, but we are going to do everything we can possibly do from a design perspective to minimize any risk of disease or any animal getting into the zoo,” said James Wagner, director of the Working in Neighborhoods Department.

Lindsay Hutchison, president and CEO of the Tulsa Zoo, said she called the city to discuss the plan after learning about it in the newspaper in October.

“We are passionate about animal welfare in the city, so we want to be part of the solution,” Hutchison said. “We just want to be sure it doesn’t negatively impact our animals.”

The city’s plan calls for replacing the existing Tulsa Animal Welfare shelter at 3031 N. Erie Ave. with a new one that would be built on 3.5 acres just south of the zoo at 36th Street North and Pawnee Drive.

“Having the presence of an animal welfare facility will attract other animals and increase the number of unwanted animals at our gates,” Hutchison said. “That is already a regular occurrence by the public — that the zoo can assume the care of unwanted, injured or stray animals.

“And we cannot offer holding for stray and abandoned animals, including those that slip onto zoo grounds, because of the disease risk. They put our rare and endangered species at risk due to the presence of their unknown conditions.”

Hutchison said the zoo’s service gates are opened more than a 100 times a day and that there is no way to move them to another part of the complex.

“Whenever they (stray animals) slip on grounds, it immediately causes a disruption, and we have to initiate emergency protocol, pull animal care, health staff from their regular duties, and immediately trap and remove the animals because they pose a risk to our animals,” she said.

Wagner said the city shares the zoo’s concerns and that, at his request, the architect on the project, GH2, has retained a veterinarian who specializes in infectious diseases.

Moving forward, the city plans to include a member of the zoo staff in the design process.

During the city’s recent kickoff meeting with GH2, Wagner said, he challenged the architects to go through every disease that could potentially enter the new facility and come up with a plan to make sure those diseases can’t leave the facility.

“We started off and specifically asked the question: Are there grave concerns that you would have about this site from an infectious disease perspective, from the perspective of the zoo? And she said, ‘no,’ basically,” Wagner said, “that she thought there were solutions to the issues that they had brought up and that the risk was incredibly low.

“Now, that said, there are going to be design considerations — for instance, things like perimeter fencing — that we will need to take into consideration as we design that facility, and we are serious about that.”

The existing animal welfare shelter has been in poor condition for years and has frequently had to close its doors temporarily due to outbreaks of distemper and other animal diseases. It reopened last week after being closed for a month due to a canine influenza outbreak.

Wagner said it’s important to understand that the existing animal welfare shelter is not designed to keep diseases from spreading from animal to animal but that the new one will be.

“To extrapolate the experience that we have had at the current facility with what we are designing now is just not a fair comparison, because what they have now, there is no separate ventilation,” Wagner said. “So everything that is in the facility just gets spread everywhere. And what we are talking about with the new facility is positive and negative air pressures and different types of rooms so that there is no transmission outside of an isolation room.

“It literally is night and day in terms of the facility’s ability by what is built into it to isolate disease and prevent it from spreading.”

The 24,125-square-foot facility is expected to include clinic space, a surgery center, isolation rooms, an adoption area, office space, an outdoor space for animals, and more than 500 cages for cats, dogs, exotic animals and recovering animals.

The city initially budgeted $4.7 million to remodel and expand its existing animal shelter. By last summer, though, city officials began exploring whether a new facility could be built at a cost similar to the requested improvements, as the shelter’s needs have continued to grow.

The cost of the new shelter is currently budgeted at just under $12.9 million.

City officials say they hope construction can begin by the end of 2024, but they will need to raise an additional $5.5 million from public and private sources.

A report presented Tuesday put the estimated cost to repair the Tulsa County Courthouse and bring it up to today's standards at potentially more than $73 million.

The Association of Oklahoma General Contractors says it has been working for years to resolve its problems with the city, including late payments, without ever solving them.

Grant Miller says he does not promote his interest in the industry for security reasons and that he sees no conflict of interest in pushing for city employees to be allowed to use medical marijuana as they would any other prescription medication.

The trails will be more difficult than the 11.5 miles of easy to moderate trails River Parks has recently built as part of the Turkey Mountain Master Plan, officials say.

Who is Tulsa's next mayor? These seven potential candidates are thinking about running

Mayor G.T. Bynum's second four-year term ends in December 2024, and he has said he will not run again. No one on this list, it’s important to emphasize, is a definite.

Jenks Mayor Cory Box says the project will be the largest economic development driver in that city's history.

Proponents of gender-affirming treatments say conservatives, increasingly campaigning on social issues that incite anger, have made trans people out to be the boogeyman.

The city has a plan to replace the existing Tulsa Animal Welfare shelter at 3031 N. Erie Ave. with a new one at 36th Street North and Pawnee Drive. The existing shelter is not designed to keep diseases from spreading from animal to animal, but the new one will be, officials said.

This design shows the city’s concept for replacing the existing Tulsa Animal Welfare shelter at 3031 N. Erie Ave. with a new one on 3.5 acres south of the zoo at 36th Street North and Pawnee Drive. The design is subject to change.