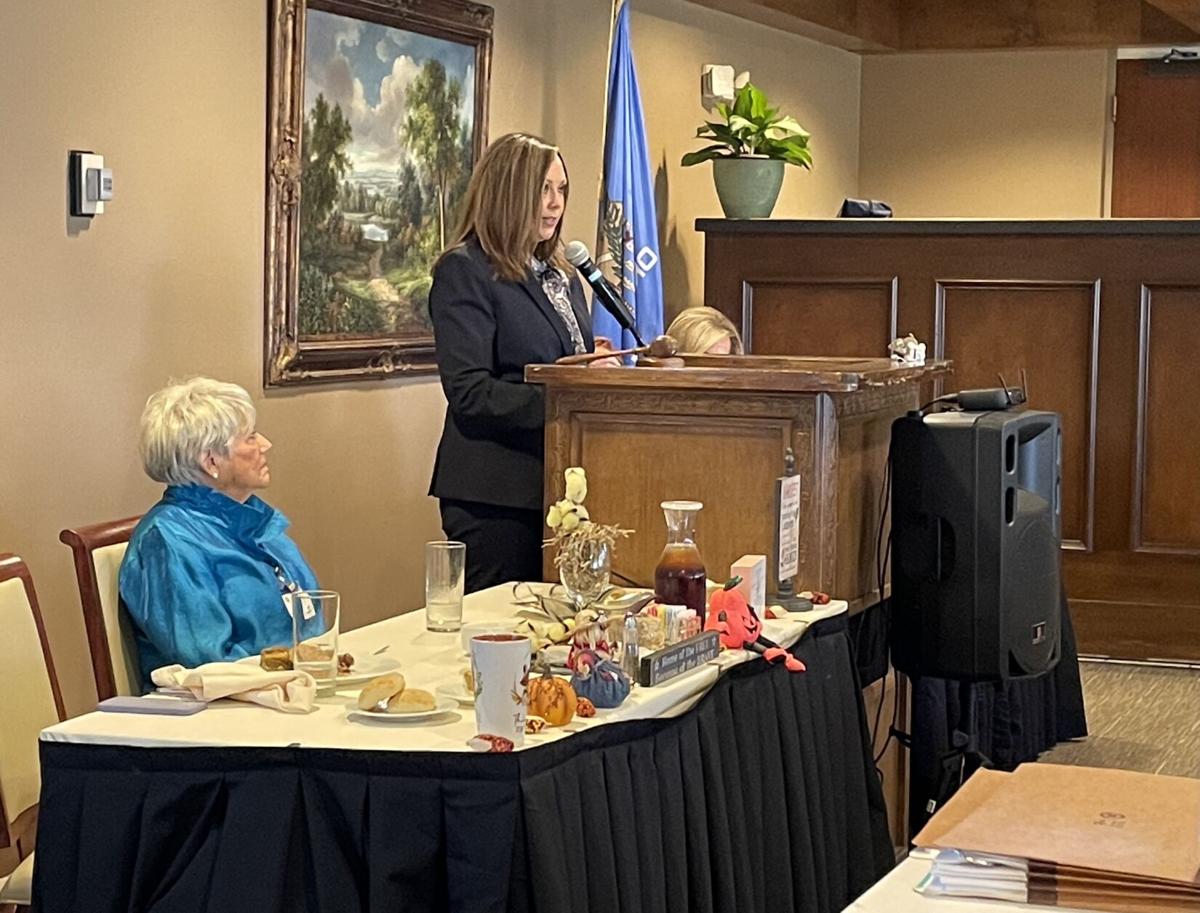 State Auditor and Inspector Cindy Byrd speaks at the monthly luncheon of the Republican Women’s Club of Tulsa County on Tuesday. 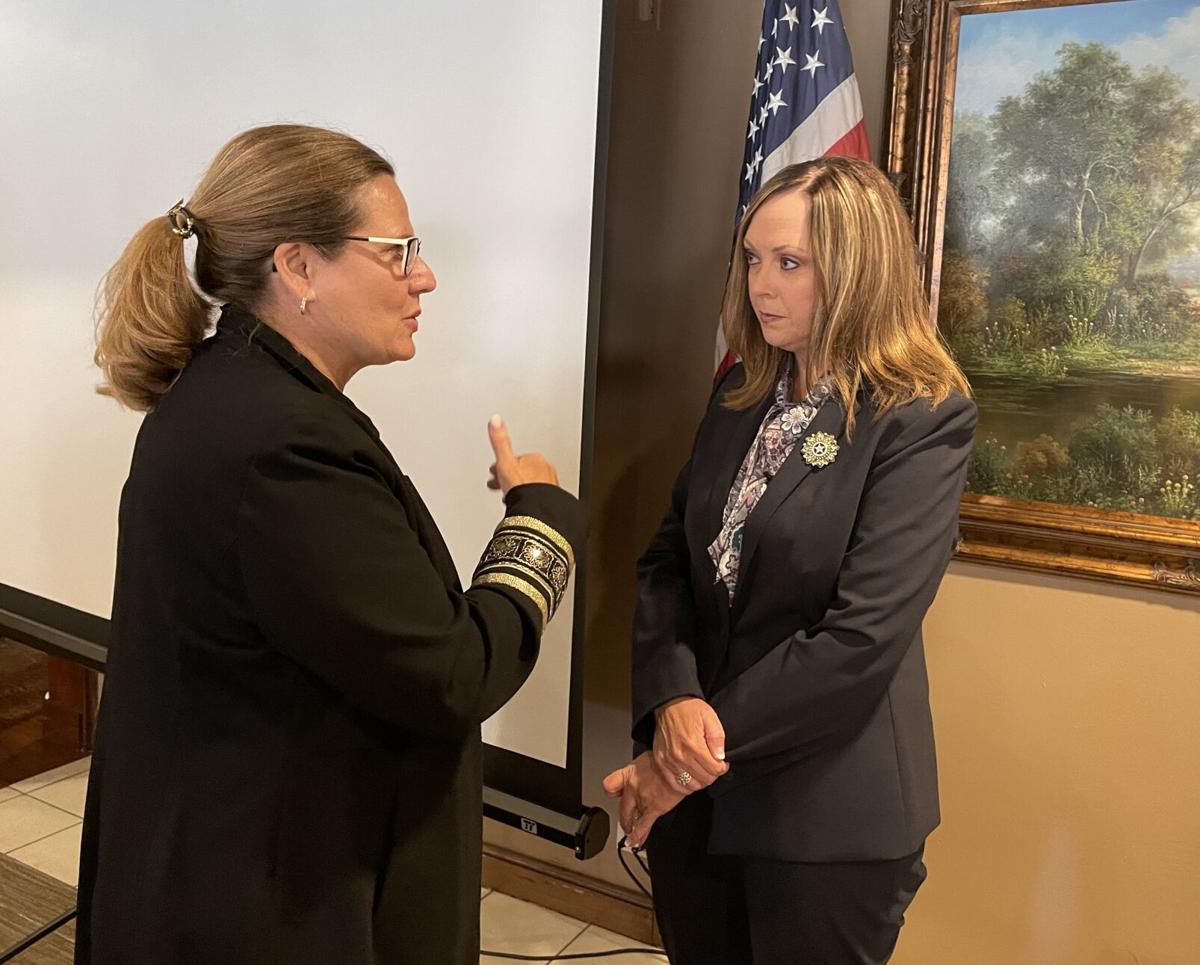 State Auditor and Inspector Cindy Byrd (right) visits with a luncheon attendee at the Republican Women’s Club of Tulsa County meeting on Tuesday.

Oklahoma’s state auditor and inspector told a Tulsa audience on Tuesday that the criminal investigation into financial practices of Epic Charter Schools’ founders and ousted for-profit managers has not been completed despite public claims to the contrary.

“This is far from over. The criminality of this cannot be ignored. There will be charges,” said Cindy Byrd, a Republican elected to the statewide office in November 2018.

Byrd received a standing ovation after her presentation to the Republican Women’s Club of Tulsa County. The monthly luncheon was attended by more than 200 people at the Tulsa Country Club on Tuesday.

“Remember,” Byrd told them, “this is what prompted Gov. Stitt to ask for the audit into the State Department of Education,” a move the RWC of Tulsa County applauded.

Gov. Kevin Stitt charged Byrd’s office with determining whether public school administration costs elsewhere are exceeding the state’s legal cap, which is 5% for large districts like Epic. His other objective for Byrd’s office is to identify all revenue sources flowing into the state Education Department.

It was a similar request from Stitt in the summer of 2019 that inserted Byrd into the finances of Epic, which was founded by two Oklahoma City men, Ben Harris and David Chaney.

Along with two Epic charter schools in Oklahoma, Harris and Chaney created a for-profit school management company called Epic Youth Services, which the school turned around and paid a 10% cut of all state and federal funding.

The first legal problem with that arrangement, Byrd said, is that Epic was limited by state law to spending only 5% of its taxpayer dollars on administrative costs.

To make matters worse, according to Byrd, is that the duo hired an entire administrative staff at Epic Charter Schools at public expense to do the work their for-profit management company was also being paid to do.

“The Epic school employees that are paid with state tax dollars, working on state computers, working in state-funded buildings, utilizing state email addresses do the work of the private company,” Byrd said. “Now, if a for-profit company is utilizing state-paid employees and state-paid resources to run and benefit their private business, this is considered embezzlement.”

She said inaction by legislators or law enforcement or prosecutors in the last 13 months since her report exposed the scheme left the door open for Harris and Chaney to “pocket” another $80 million for fiscal year 2021.

“It has been a long year combating these lies,” Byrd said. “The audit was not against charter schools or school choice. It was about a government contract and a private company and its two owners that were being paid millions for work the school employees were already doing.”

“They created 14 categories (of expenses) and submitted the same exact percentages for the entire year,” Byrd said, showing the attendees a detailed chart of what EYS invoiced, including hundreds of thousands of dollars for the salaries of public school employees she said were not employed by the company.

“We also have several questions why a purely online school has the need to spend over $600,000 for land rental and construction services,” prompting audible gasps across the room.

That school, Epic One-on-One, also reportedly had been invoiced by EYS for child nutrition expenses, which Byrd questions because that school’s students couldn’t participate in a school meal program because they learn at home.

Byrd said the questionable financial practices were made possible in part “because David Chaney was both superintendent and 50% owner of the company and he could sign off on both sides of all of the purchase order transactions.”

Byrd said she questions whether Harris and Chaney have been able to avoid accountability for their actions by wielding significant political influence — through documented campaign donations, lobbying elected officials at the state Capitol and even philanthropic giving, which she did not specify.

“Since the audit, the amount of contributions to individuals (political candidates) through PACs (political action committees), dark money organizations and to LLCs is beyond measurement,” she said.

She said that despite her office’s having won a court ruling to gain access to the private company’s use of public dollars it took into private company accounts for the school’s student Learning Fund, the process has been an arduous one because the company continues to employ four high-powered Oklahoma City law firms.

Of the “selected student learning fund” records not previously accessible to the her office, Byrd said she learned that Chaney and Josh Brock, who had long worked as chief financial officer for both Epic Charter Schools and Epic Youth Services, had used personal credit cards to make millions of dollars worth of purchases for students.

None of those records has been made public yet or reported on in writing by the State Auditor and Inspector’s Office.

In May, Epic Charter Schools’ governing board members voted to divorce the school from any involvement with Harris and Chaney and their company EYS.

Byrd said that was important progress made by the school’s new leaders. She also said taxpayers should be reassured by the fact they have since redirected $30 million to $40 million previously spent paying Harris and Chaney to hire more teachers so students get more individualized attention, overhauled its governing board membership, and hired an experienced public school chief financial officer, internal auditor and encumbrance clerks.

Byrd said Harris and Chaney’s defenders have gone so far as to publish claims online recently that the two men have been exonerated by a yearslong criminal investigation that has involved a slew of local, state and federal agencies and Oklahoma’s multicounty grand jury.

That grand jury’s term simply expired on Sept. 7, “before the case was finished,” Byrd said.

Researchers finally figured out why cannabis smells like skunk

This incredibly small reptile species was just discovered in Madagascar

This incredibly small reptile species was just discovered in Madagascar

If the Oklahoma City council also approves the change, EMSA could staff ambulances with two EMTs instead of one EMT and one paramedic.

The county has allocated nearly $38 million of the $126.6 million it will receive in ARPA funds over the next two years, according to county records.

The proposal drew a strong response from the public at the time, but Wednesday it went away with no comment from councilors.

The third and final community meeting before developer selection will now be announced in mid-December to give the city and TAEO more time to ensure that developer plans meet standards.

Hotel to Housing failed to make good on promises to the homeless, former employees say

The former Housing Solutions employees say mismanagement led to a chaotic scene at the old Wyndham Hotel building, with only a fraction of those promised permanent housing receiving it.

"While every other public safety element in the city of Tulsa has seen significant investment into its personnel, Tulsa firefighters have been intentionally disregarded," a union leader says.

State Auditor and Inspector Cindy Byrd speaks at the monthly luncheon of the Republican Women’s Club of Tulsa County on Tuesday.

State Auditor and Inspector Cindy Byrd (right) visits with a luncheon attendee at the Republican Women’s Club of Tulsa County meeting on Tuesday.