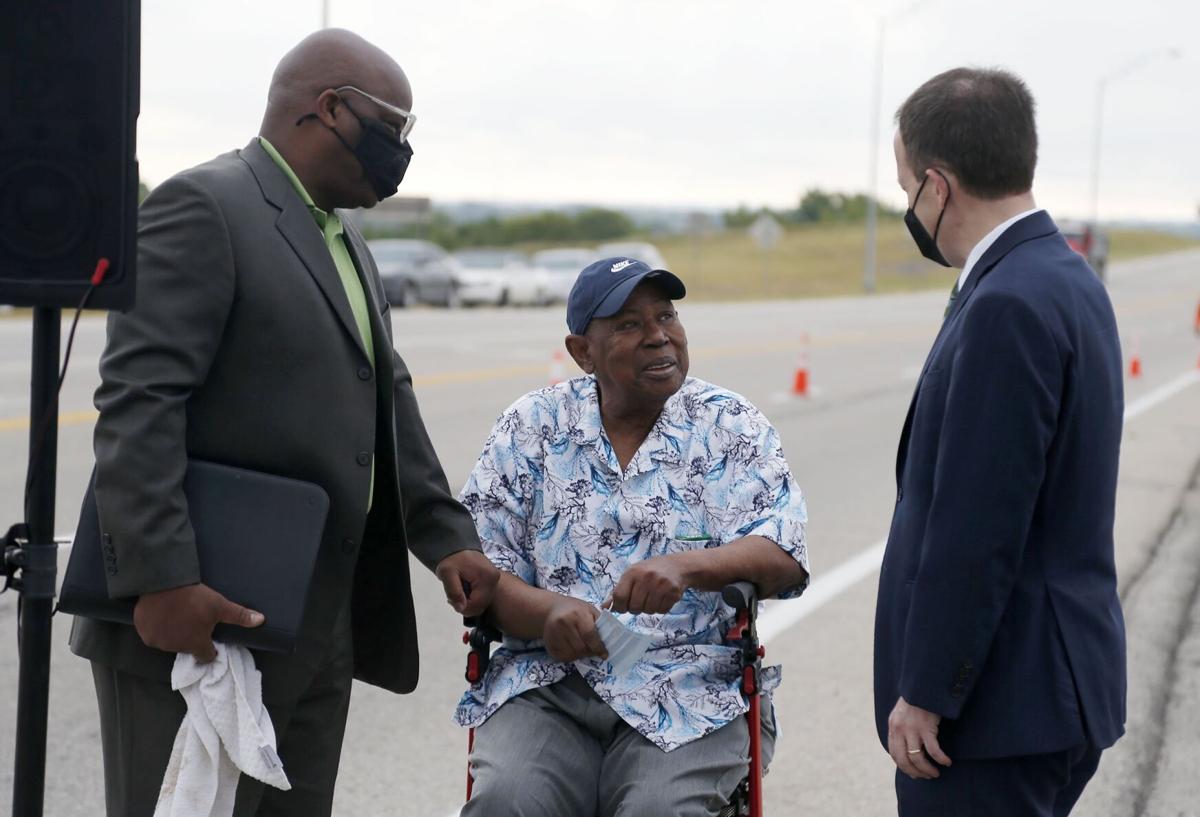 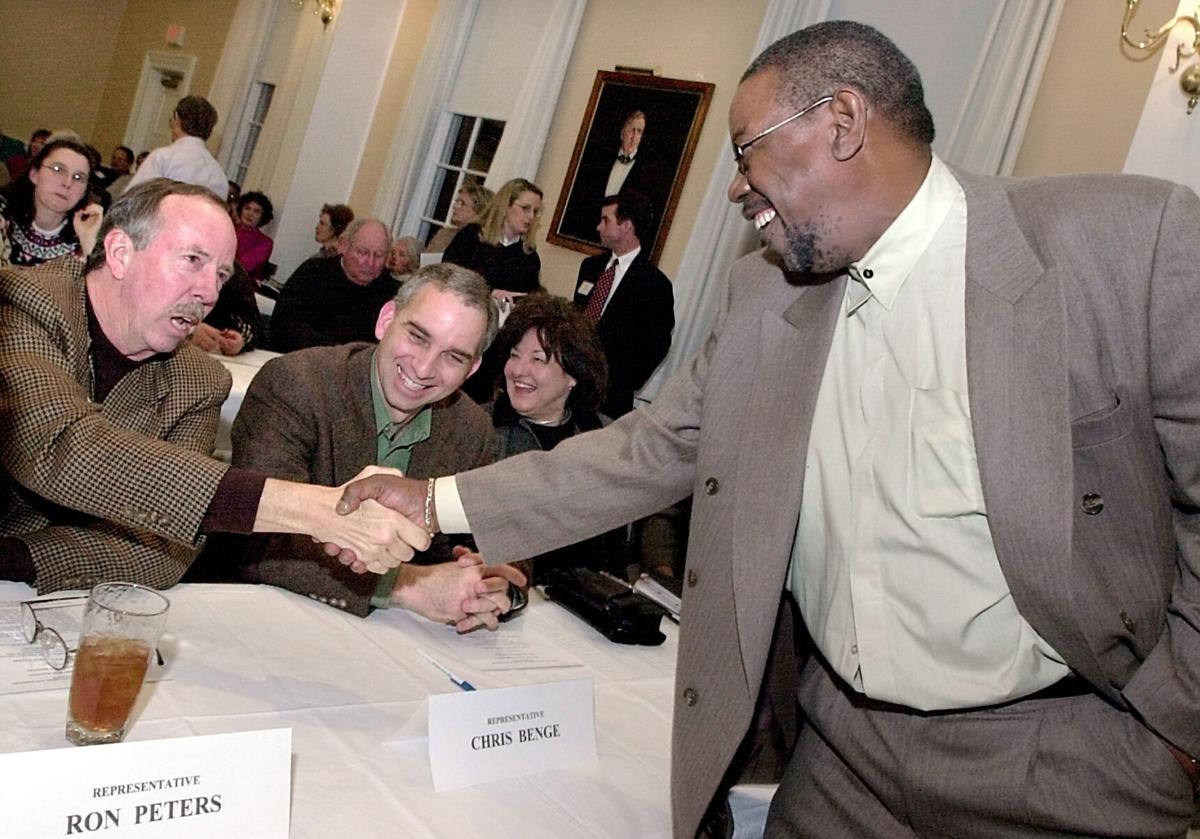 State Rep. Don Ross (right) greets fellow Reps. Ron Peters (left) and Chris Benge during a reception at All Souls Unitarian Church in Tulsa in 2001. Ross served in the Legislature from 1983 to 2003. 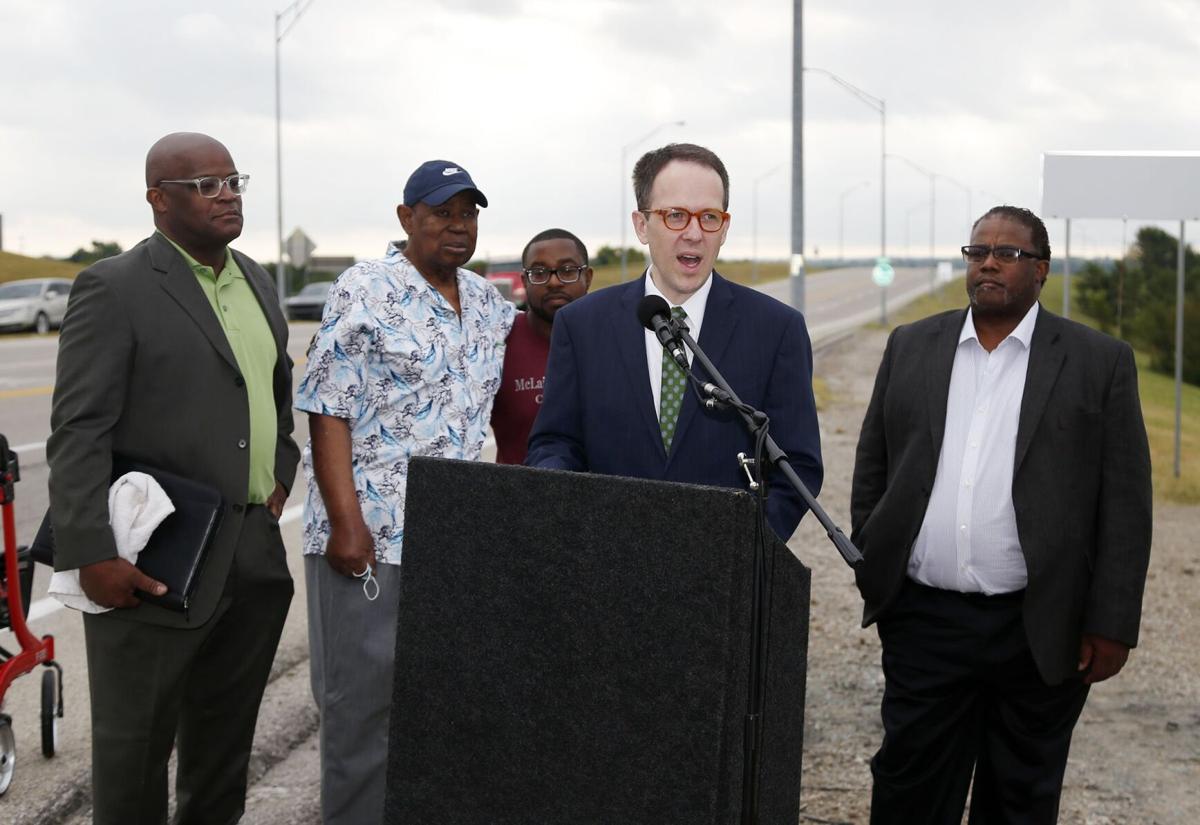 Tulsa Mayor G.T. Bynum talks about former state Rep. Don Ross (second from left), who stands with his nephew Delonzo Ross and his sons, Edward Ross and Kavin Ross, during the unveiling of the Don Ross Expressway in Tulsa on Wednesday. 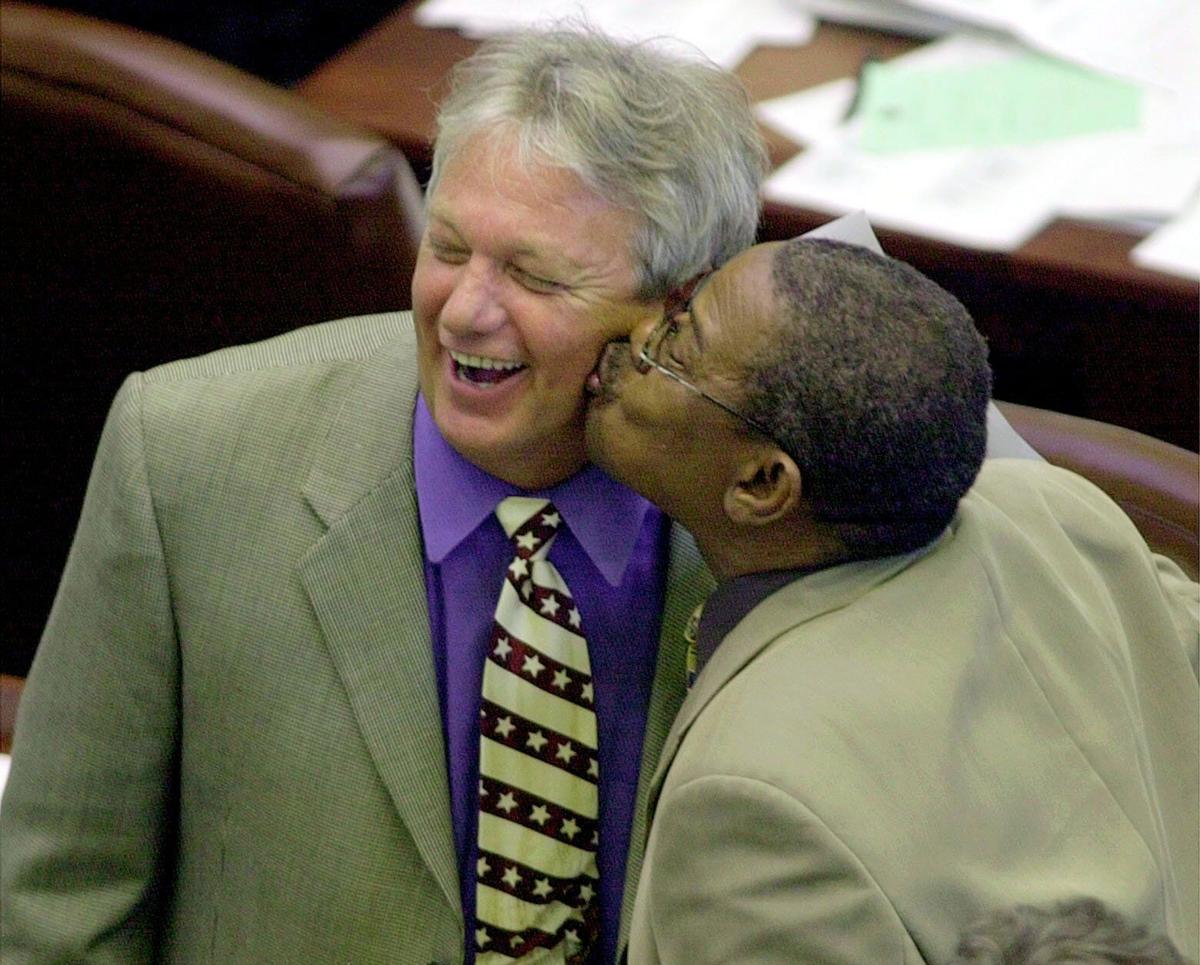 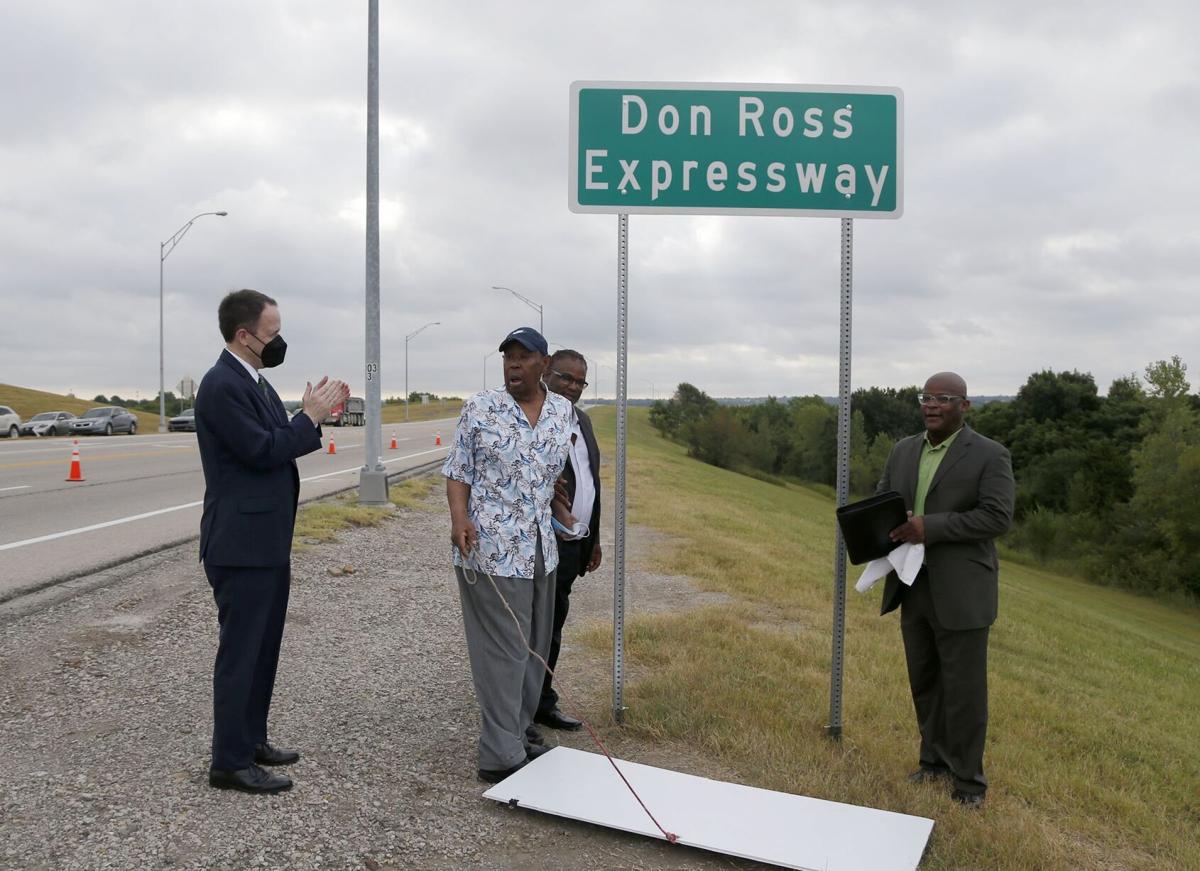 Don Ross has spent decades serving the city of Tulsa, and on Wednesday morning the city thanked the longtime state representative for his service by naming a 2.2-mile stretch of Gilcrease Expressway after him.

It only seemed right. Ross was responsible for getting the initial state funding for the expressway, one of his long list of accomplishments while serving in the Legislature from 1983 to 2003.

“This is a really important moment for our city,” said Mayor G.T. Bynum. “We are a city that honors heroes, and we have a hero in our midst today.”

Bynum spent several minutes recalling Ross’s long and eventful life, from his days as a student at Booker T. Washington High School to his service in the U.S. Air Force to his many years as a civil rights activist and journalist.

“Of course, for many of us, when we look at the history books, where we see Don Ross the most is from his 20 years in the Oklahoma state House of Representatives,” Bynum said. “And it was an eventful 20 years. He was not there just passing time. He was getting things done.”

One of Ross’s most significant accomplishments, Bynum said, was his work with former state Sen. Maxine Horner to create the 1921 Tulsa Race Riot Commission in the late 1990s. The commission’s report, issued in 2001, remains to this day the guiding document for uncovering and understanding what happened during the massacre, Bynum said.

“I just want to say on behalf of all 400,000 people here in Tulsa to Rep. Ross how grateful we are for your service,” Bynum said.

State Rep. Regina Goodwin, who occupies the District 73 seat once held by Ross, said people still stop her in the halls of the state Capitol to tell her how great a man he is.

“He was eloquent in his arguments. He was tenacious in his fight, and his heart was as big as ever could be for this community,” Goodwin said. “And those combinations, that intellect, that eloquence is needed, and he is absolutely deserving of the (expressway) naming and this ceremony.

Ross’ sons, Edward Ross and Kavin Ross, described their father as a man who has dedicated his life to loving his family and caring for his community.

“In your tenure as state Rep. District 73, you brought more revenue, more projects, more opportunity, more development to north Tulsa than anybody,” said Edward Ross. “You didn’t fail, because you never quit. You kept going.”

Kavin Ross has carried on his father’s legacy through his work as chairman of the 1921 Graves Investigation Public Oversight Committee. He said it was difficult to put his father’s legacy into words but that he was thankful that even today the fruits of his labor are being recognized.

“And this freeway is one of them,” he said.

“We are recruiting as fast as we can because our precinct officials numbers are dropping dramatically,” Election Board Secretary Gwen Freeman said. “They are just, ‘We don’t want to work.’ … Obviously, we can’t have an election without precinct officials.”

David O'Meilia to retire after 10-year stint as city attorney

The city has completed its internal search for candidates and is extending the search to include external candidates.

The shelter at the old Avalon Correctional Services building on Archer Street is scheduled to be open for three months but could operate longer if the need persists and funding is available.

Sen. Jim Inhofe, a longtime proponent of the levee project, did not vote for the legislation that wound up funding it.
Politics

Reports that the alliance could be breaking ground on the project near Cyrus Avery Plaza later this year are premature because the city is still accepting requests for proposals from developers.

State Rep. Don Ross (right) greets fellow Reps. Ron Peters (left) and Chris Benge during a reception at All Souls Unitarian Church in Tulsa in 2001. Ross served in the Legislature from 1983 to 2003.

Tulsa Mayor G.T. Bynum talks about former state Rep. Don Ross (second from left), who stands with his nephew Delonzo Ross and his sons, Edward Ross and Kavin Ross, during the unveiling of the Don Ross Expressway in Tulsa on Wednesday.