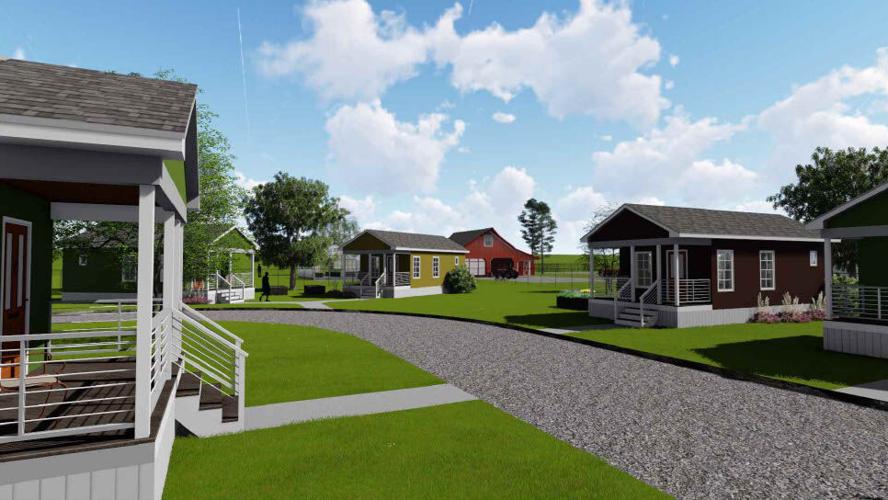 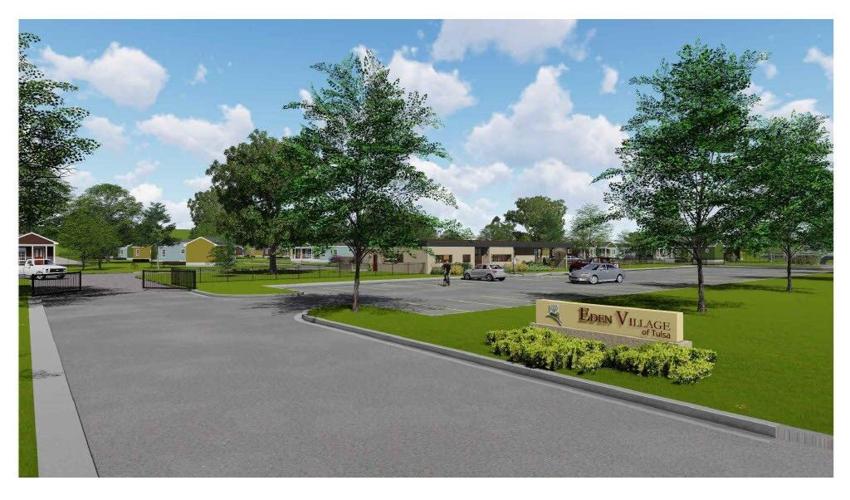 The message has generally been well-received by the nonprofits, foundations and social service agencies that for years have been doing the outreach, staffing and funding the shelters, and advocating for the community’s most vulnerable population.

Meanwhile, the work goes on. Two nonprofits — one new and one not — are developing separate but similar programs to provide chronically homeless people with permanent residences.

They’re called tiny home villages, and they are popping up in states across the country.

The villages planned for Tulsa are City Lights Village near 46th Street North and Peoria Avenue and Eden Village of Tulsa off Charles Page Boulevard.

In an important twist, both from a practical and messaging perspective, officials describe these residential housing units as being for people who were formerly homeless. And they will be built on property already zoned residential, thereby eliminating the inevitably contentious rezoning process.

“The big picture is that these are housed people; they are not homeless,” said Sarah Grounds, executive director of City Lights Foundation of Oklahoma. “They are housed people that are paying rent and that are stepping into the rest of their lives, which is a positive place to be.”

City Lights plans to build 75 tiny homes in three phases as funding becomes available. The 23-acre site was donated by Catholic Charities of Eastern Oklahoma and the Roman Catholic Diocese of Tulsa.

Phase 1 will include the construction of 18 to 20 homes and a community center.

“Catholic Charities’ generosity in this is amazing and also just their encouragement to believe in us and in the things that we do as a partner,” Grounds said. “That has been just a beautiful gift to us that we did not anticipate but we will be forever grateful for.”

Residents will pay $400 a month to live in the 400-square-foot, triplex homes. Each unit will include a full kitchen, a living room, a bedroom and a full bathroom.

Many people experiencing homelessness receive some type of benefits, such as Social Security and disability, that could be used to pay for their housing, Grounds said.

City Lights Village anticipates being able to accept Section 8 vouchers and will also work with residents to help them find work if possible.

Two people can live in the City Lights’ low-barrier, pet-friendly homes, but Grounds expects that most units will have just one occupant.

“The porches will be on each end, so they still have their own private porch area,” Grounds said. “And then they will all be sprinkled and have a firewall in them, so they are all very, very safe.”

The heart of the community-first village will be the community center. In addition to housing City Lights’ new headquarters, it will be the place residents go to access wraparound services, do their laundry and share meals — including with generous Tulsans who might be inclined to donate food.

“Everybody will have a kitchen in their own homes, but we are community friendly, so volunteers will be able to come in and do different things” at the community center, Grounds said.

Rent does not include meals, Grounds said, but residents can use the nearby bus route to go to the store and continue to take advantage of programs like SNAP — the Supplemental Nutrition Assistance Program — and the meals provided by organizations such as Iron Gate.

City Lights Village is also expected to have chickens, a vegetable garden and a memorial garden — a feature Grounds believes is especially important.

“When we look at the vulnerability that people are living with, the medical vulnerability on the streets, it is super high,” Grounds said. “And to not be remembered is a huge, huge thing. And so we have really strived to make sure people know that they are seen, known and loved.

“And so this will be a place they can be remembered when they are gone — or remember their friends.”

City Lights is in the middle of a capital campaign to fund the estimated $13 million project. An official groundbreaking is tentatively scheduled for 2023.

For Grounds, it’s almost more than she can wrap her head around. In 2018, City Lights tried to build permanent housing for the homeless in Turley. It did not go well.

“Zoning has been problematic in the past, and we are working in ways now that that won’t be an issue, so the NIMBYism won’t have as strong a foothold in what we are able to do for people who need homes,” Grounds said. NIMBY is an acronym for Not In My Back Yard.

Grounds and her staff have spent the last few years learning from that experience. A big part of that process took place in Austin, Texas, where they have spent considerable time at Community First! Village.

“We just (got) totally ingrained in ‘This is what works. This is what hasn’t worked. This is where we should have done better,’ all of that,” Grounds said.

So it is with confidence — and with her eyes wide open — that she goes forward with the launch of City Lights Village.

“We are completely prepared to do this in a way that sends ripples all over Tulsa in a positive way, taking care of our vulnerable people that should not be dying on the streets, taking care of neighbors and restoring community across the board and decreasing the use of our system.”

Brad Johnson spent 32 years operating a lawn care service and other businesses. Before that, he was a middle school science teacher.

Now 68, he’s doing what he describes as the most important work of his life — trying to help homeless people by providing permanent housing.

“There are a lot of different ways to fight this battle, but from what I can see the weak link is permanent, supported housing for the homeless,” Johnson said. “There is no question that that is the weak link, so that is what I am trying to focus on.”

Earlier this year, he filed papers to establish Eden Village of Tulsa Inc., a nonprofit that will oversee, fund and operate a tiny home village. Johnson said the project is in the early development stages and that plans are to build it on an undisclosed 17-acre site near Charles Page Boulevard west of downtown Tulsa.

“It’s a lot more than giving them a home with a roof over their head. That is important, but what is even more important is the relationships they are allowed to form in the community,” Johnson said. “The sense of belonging, the sense of pride, and that is what we feel like a tiny home village such as what we will have and what City Lights will have is all about. It is about community.”

“Using their knowledge and their brand, their connections, it seemed like a no-brainer to me if I was going to do this — to hook up and become an Eden Village of Tulsa,” Johnson said.

The tiny home village is expected to have 70 units, roughly 50 of which would be built in Phase 1 of the project. Each solar-powered home would be approximately 400 square feet and would include a bathroom, a bedroom, a living room and a kitchen.

“It is not a handout,” Johnson said. “They have got skin in the game.”

The community center at Eden Village of Tulsa, like one at City Lights Village, will be integral to the community’s success.

“One beauty of this is it is going to set us up to have a lot of volunteers from the community who want to help people in a real tangible way — how to cook, how to manage their money. Those are real concrete volunteer opportunities for the community to get involved in,” Johnson said.

Eden Village of Tulsa is raising $5.2 million for Phase 1 of the project, which Johnson said he hopes to break ground on soon.

“By late winter we will have model homes on our land and at other locations in the city where people can view them.”

City officials say the project is addressing the zoo's concerns. The existing animal welfare shelter has been in poor condition for years and has frequently had to close its doors temporarily due to outbreaks of distemper and other animal diseases.

A report presented Tuesday put the estimated cost to repair the Tulsa County Courthouse and bring it up to today's standards at potentially more than $73 million.

Grant Miller says he does not promote his interest in the industry for security reasons and that he sees no conflict of interest in pushing for city employees to be allowed to use medical marijuana as they would any other prescription medication.

The Association of Oklahoma General Contractors says it has been working for years to resolve its problems with the city, including late payments, without ever solving them.

Who is Tulsa's next mayor? These seven potential candidates are thinking about running

Mayor G.T. Bynum's second four-year term ends in December 2024, and he has said he will not run again. No one on this list, it’s important to emphasize, is a definite.

The trails will be more difficult than the 11.5 miles of easy to moderate trails River Parks has recently built as part of the Turkey Mountain Master Plan, officials say.

Jenks Mayor Cory Box says the project will be the largest economic development driver in that city's history.

Proponents of gender-affirming treatments say conservatives, increasingly campaigning on social issues that incite anger, have made trans people out to be the boogeyman. 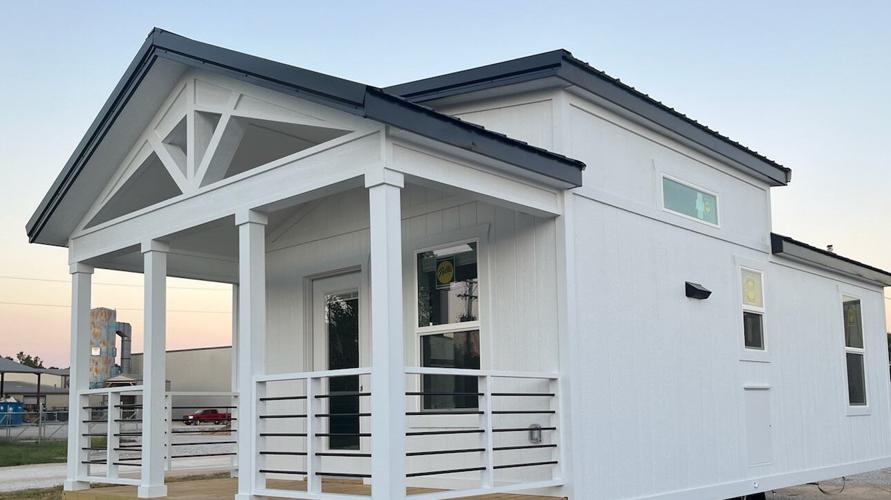 A proposed City Lights Village tiny home is pictured above.

An artist’s rendering shows the front of the City Lights Village Community Center.

An artist’s rendering shows the back of the City Lights Village Community Center.