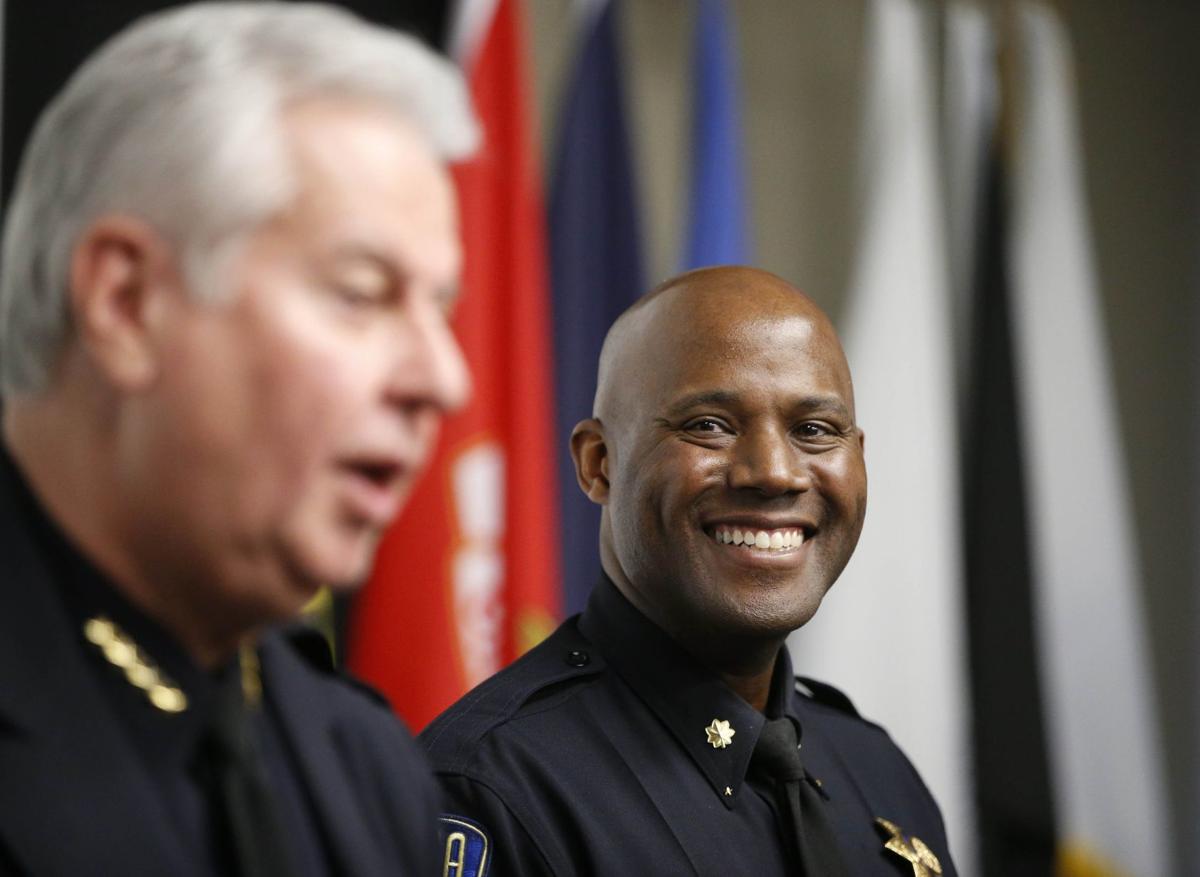 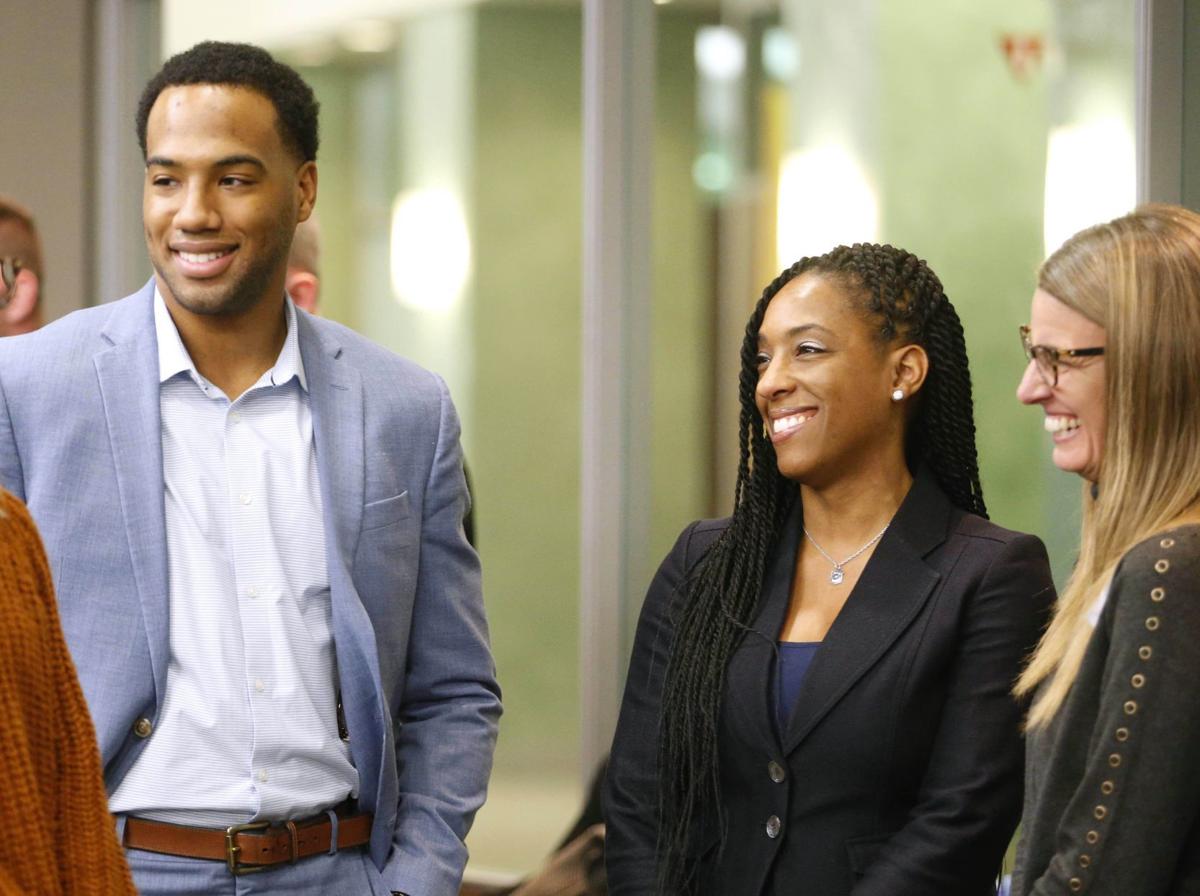 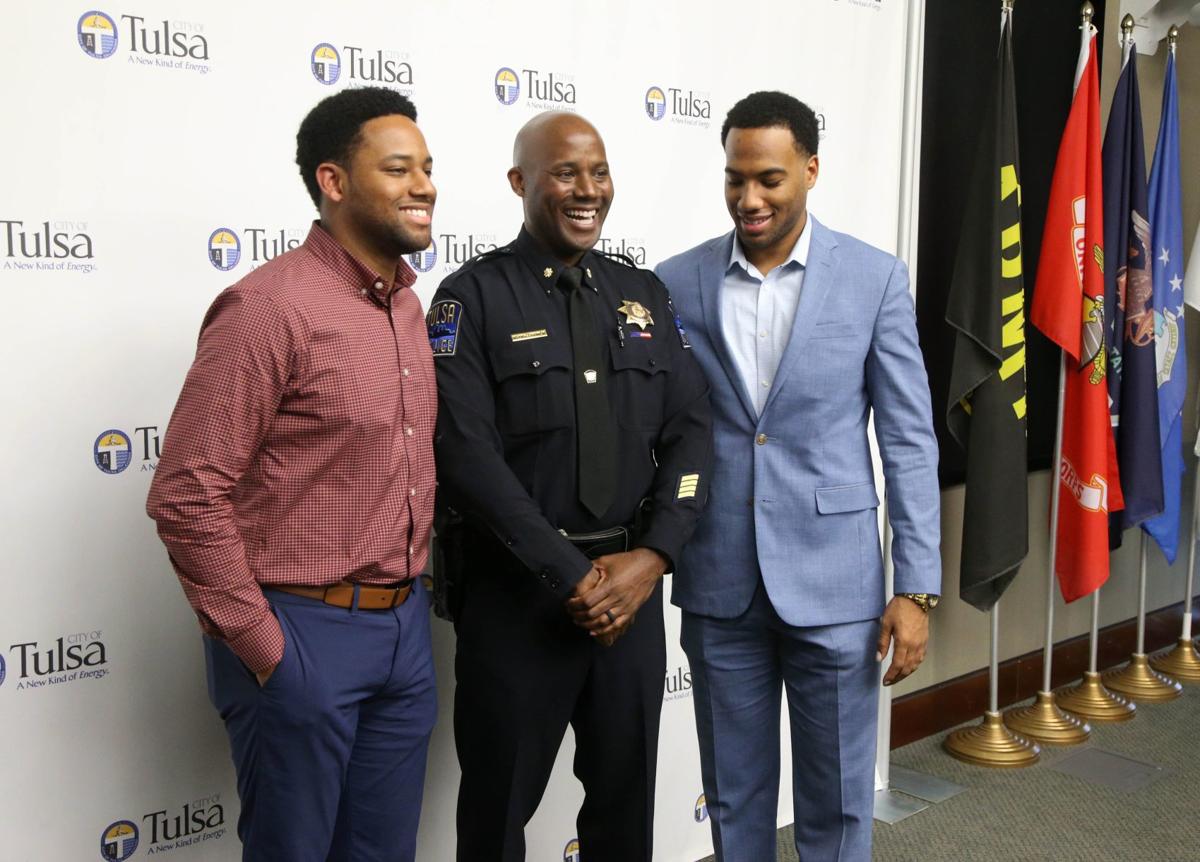 Maj. Wendell Franklin, who has been appointed Tulsa’s next police chief, poses for a photo with his sons, Coreon (left) and Brendon Franklin, after Wednesday’s press conference at City Hall. MATT BARNARD/Tulsa World

“I am so fearful of failing, OK, but I know I can’t fail because I have such a great group of people around to help me,” Franklin said during an afternoon press conference at City Hall.

Franklin, 46, was selected by Mayor G.T. Bynum to succeed Chief Chuck Jordan, who is retiring Feb. 1.

Franklin’s passion for innovation and his selfless management style reflect “the ideal that my administration seeks to install in the culture of our great city,” the mayor said.

Franklin is the first African-American to serve as the city’s police chief on a permanent basis. Deputy Chief Bobby Busby served as acting chief in the early 1990s.

Franklin, who was accompanied by his wife, Arquicia Franklin, and their two sons, said he and his family recognize the historic significance of his selection.

“But I am so much more focused on where we need to go and what I need to do,” he said.

Franklin was commander of the Gilcrease Division in historically black north Tulsa for several years, an experience he said has helped him appreciate the complex relationship between that community and the officers who serve it.

“I have always tried to reach out in north Tulsa and be intentional,” he said. “And what we’re going to have to do is be more intentional in our outreach and how we go out into the community.”

Bynum, too, acknowledged the historic significance of Franklin’s selection but said race did not play a factor in his decision.

Franklin joined the Tulsa Police Department in 1997. He is a 1992 graduate of Booker T. Washington High School and a 1996 graduate of Langston University in Tulsa.

He most recently led the department’s Headquarters Division, where he oversaw accreditation and helped develop and implement policy.

Franklin said Wednesday that he plans to use the latest technology to enhance transparency and improve service.

“One of the things I believe is, if you are not growing, if you are stagnant, if you don’t want to change, well, change is happening,” he said.

Asked about the city’s participation in the “Live PD” television program — a recent subject of controversy — Franklin acknowledged the entertainment aspect of the show but also noted its benefits.

Franklin lives in Broken Arrow but said he plans to move into the city of Tulsa.

“I just need to move over a couple blocks and be in a Tulsa address,” he said.

Franklin was one of four finalists for the job. The others were Deputy Chiefs Jonathan Brooks, Dennis Larsen and Eric Dalgleish.

Bynum said several factors separated Franklin from the rest of the field.

“I think the great distinguishing factors for him were his work as a front-line commander and officer to whom community policing came by instinct,” the mayor said. “He was out doing it before we knew to call it community policing, and that he has that reputation for being a great team builder.”

City Council Chairman Ben Kimbro praised the mayor’s selection. Kimbro was one of 10 citizen panelists who interviewed the finalists.

“Wendell Franklin is what you see is what you get,” Kimbro said. “He is honest; he is forthcoming. His expectations of command staff down to rookies is going to be very high.

“I think it is a fantastic day and an opportunity, representational of the next steps in the growth of the Police Department. He is going to do a great job.”

“I can tell you Wendell possesses all the qualities that we look for in a chief of police — integrity, strong work ethic,” Regalado said. “And he has a unique ability to connect and communicate with people of all various communities that make up the great city of Tulsa.”

Bynum ended his remarks by thanking Jordan for his 50 years of service to the city, the last 10 as police chief.

“Chief Jordan was exactly what this city needed at a low point in its history,” Bynum said. “And his steady hand has guided us through moments of severe trial and, more recently, moments of unprecedented growth. He has set a high bar.”

On this day in 2007, then-Tulsa Mayor Kathy Taylor announced former Police Chief Ron Palmer was returning to duty as the city’s top cop.

Maj. Wendell Franklin, who has been appointed Tulsa’s next police chief, poses for a photo with his sons, Coreon (left) and Brendon Franklin, after Wednesday’s press conference at City Hall. MATT BARNARD/Tulsa World