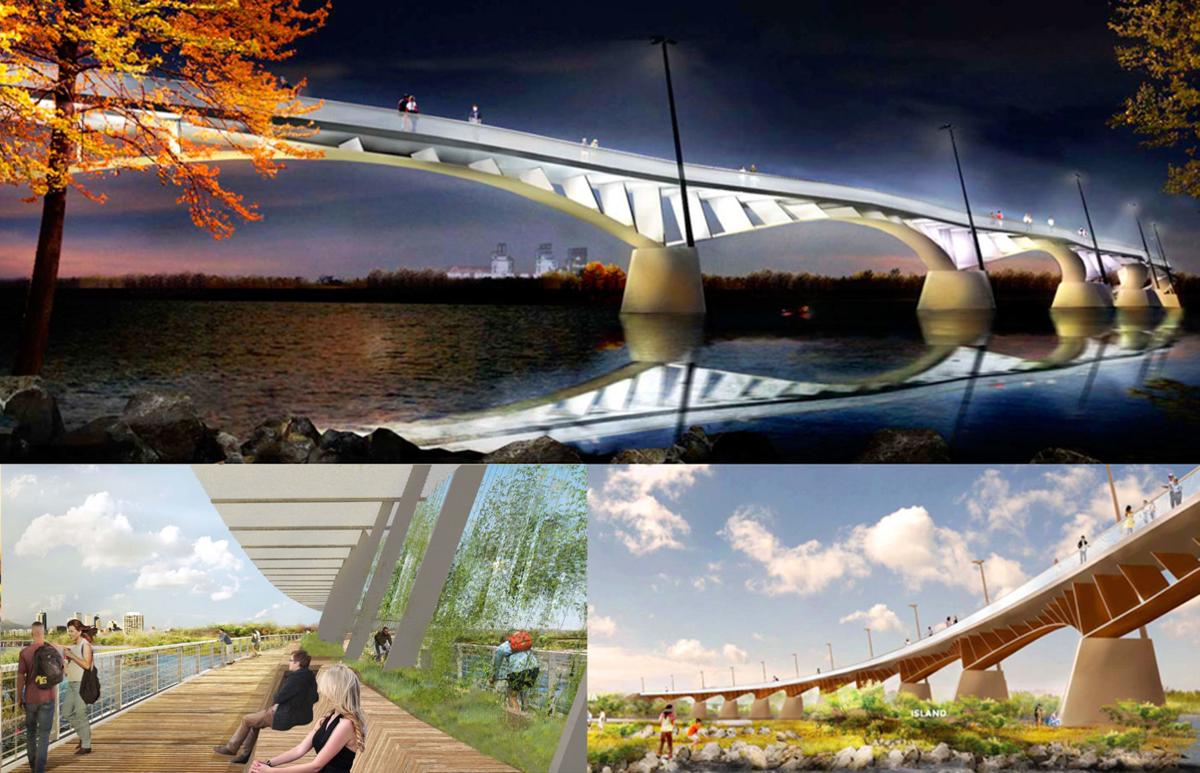 Artists renderings show various angles of the Gateway Bridge, chosen to replace the Pedestrian Bridge over the Arkansas River. Courtesy 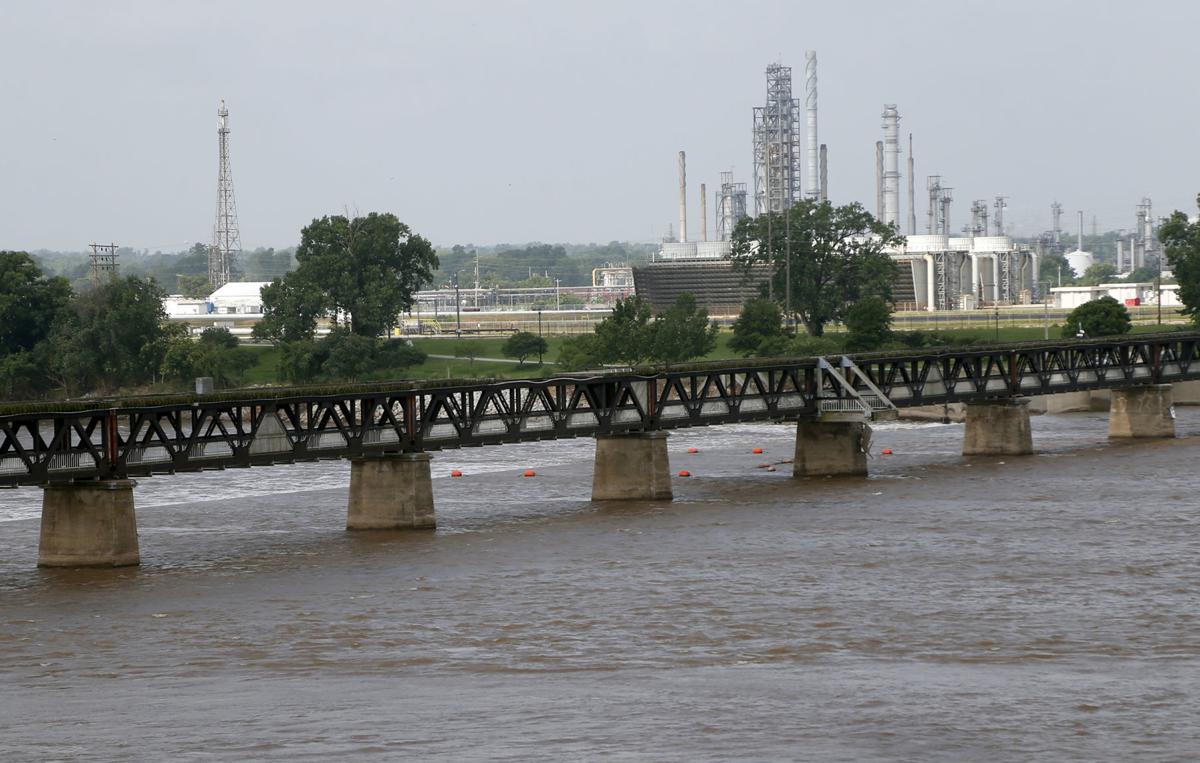 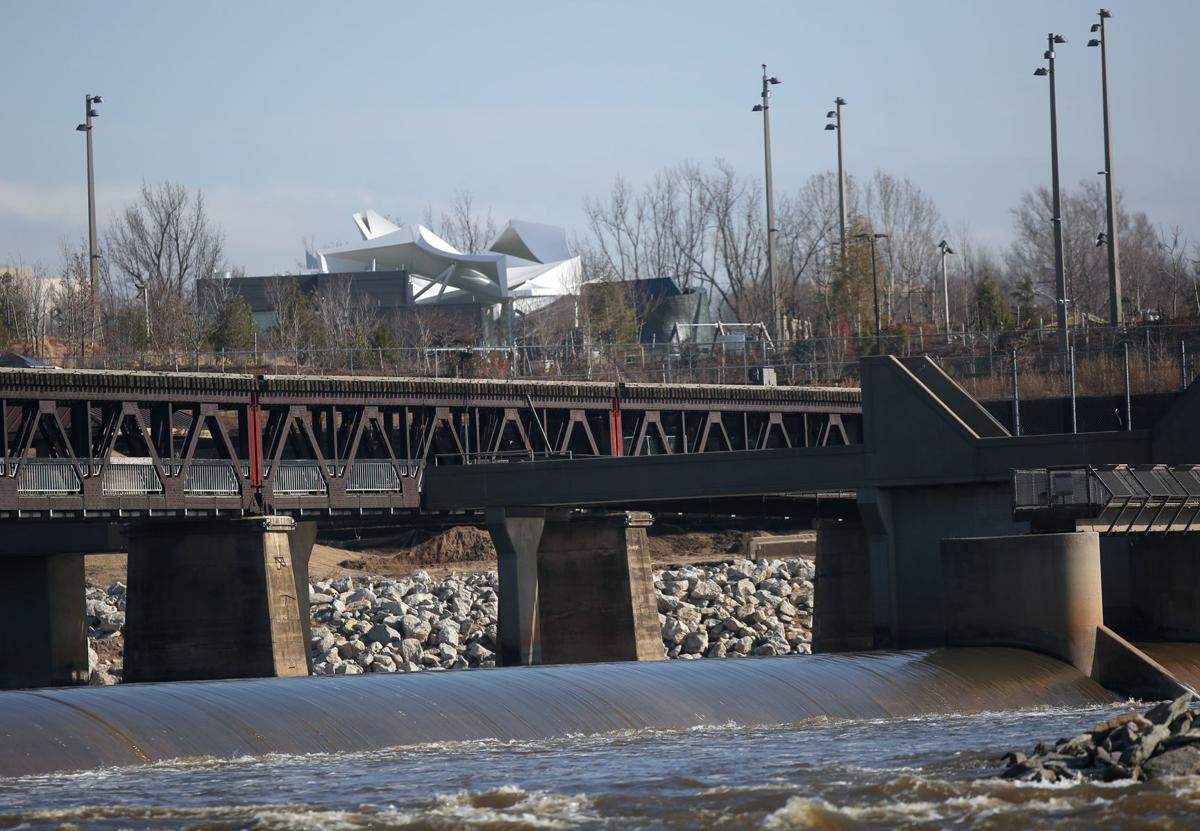 So much has been made of Gathering Place that it’s easy to forget the new pedestrian bridge over the Arkansas River that will someday connect to it.

But the project is on its way, says the man charged with getting it built.

“We are still within our ability to get it designed and built within the established (three-year) time frame that we negotiated with the city last summer,” said Jeff Stava, director and trustee of Tulsa’s Gathering Place LLC. “And we are going to work really hard to coordinate the construction schedule with the city’s low-water dam project.”

In 2017, Michael Van Valkenburgh Associates, on behalf of Gathering Place, won a city-sponsored design competition to build the bridge. The winning design, called the Gateway Bridge, will replace the century-old pedestrian bridge that sits abandoned over the Arkansas River at approximately 29th Street and Riverside Drive.

Stava said the design of the new pedestrian bridge is expected to be completed early next year, followed by 16 to 18 months of construction, putting the completion date at mid-2021.

“It will be the very first steel arched bridge in America,” Stava said.

What the bridge will include beyond its historic steel arches and a 16-foot-wide deck — twice the width of the existing bridge — has yet to be determined. During the design competition, Mayor G.T. Bynum asked Michael Van Valkenburgh Associates and the other design finalist, KKT Architects, to design a bridge that could be built for $24.5 million — and a $3 million contingency — and one that could be built for $35 million.

The catch then — and now — is that the city has $27.4 million budgeted for the project. When the city agreed to have Gathering Place build the bridge on behalf of River Parks Authority, the parties agreed to work together to identify private funding should the project end up costing more.

Stava said he believes it’s realistic to think the $27.4 million will cover the cost of a “base bridge” and that he is working to determine whether some of the enhancements shown in the rendering could be included at that price.

“I’m striving to get as many of the features that the public has said they wanted in their bridge included in the $27.4 million budget we’ve been provided,” he said.

Along with the base design will come a menu of bridge enhancements and their costs. For example, the base design of the bridge might call for a concrete bridge deck, but there could also be an option for a deck made of solid flagstone or rock aggregate, Stava said.

“The city will then decide on the features that they will add to the bridge,” he said.

The city and River Parks Authority have agreed that the cost of any enhancements beyond what the city’s $27.4 million could pay for would be split between the city and private donors, Stava said.

The city signed its agreement with River Parks Authority last July. Since then, Stava and his team have been working with Michael Van Valkenburgh Associates and engineering firm Schlaich Bergermann Partner to come up with preliminary design and cost estimates. Gathering Place officials have also spent time determining the best place for the bridge to land on the west bank of the river.

HollyFrontier last year donated $5 million to Gathering Place that includes some funding for the beautification of the west bank of the Arkansas River north of the new pedestrian bridge.

Stava said planning for the west bank improvements has not begun and that the landing points for the new pedestrian bridge will be the same as those for the existing bridge.

“Once the Gateway Bridge and low-water dam projects are completed, the Gathering Place will finish construction of the east bank where the pedestrian bridge lands, along with the north bump out, which includes the QuikTrip Lake View Lawn,” Stava said.

City officials said last week that reconstruction of Zink Dam is scheduled to begin in the summer of 2020 and take two years to complete.

Under the terms of the agreement, River Parks Authority will be responsible for routine maintenance of the new bridge, with the city assuming financial responsibility for major capital improvements.

The city of Tulsa and Gathering Place officials initially believed the original pedestrian bridge could be rehabilitated to complement the park. But a 2014 analysis found that the bridge was structurally unsound.

WPX Energy's 260,000-square-foot tower will be built on the block of property where the old Spaghetti Warehouse was located.

US, Japan to talk security in Indo-Pacific region

US, Japan to talk security in Indo-Pacific region

Signature events return to the Gathering Place for 2021

Eleven free signature events will take place at a park that was named the country's best city park in a recent USA Today poll.

Artists renderings show various angles of the Gateway Bridge, chosen to replace the Pedestrian Bridge over the Arkansas River. Courtesy