The operators of Oklahoma’s rapidly expanding virtual charter school opened their wallets during the 2018 state political campaign season in an effort to combat what they perceive as threats to the school’s continued growth.

The first round of donations came in early 2017 when the two co-founders of Epic Charter Schools and their lobbyist contributed a combined $15,000 to a Republican-based state political action committee.

When the curtain closed on the 2018 political campaign season, about 15 people with ties to Epic had donated a total of $180,000 to about 78 different candidates for legislative and statewide office.

The donations represent about 60 percent of the total $300,000 Epic backers have donated during the charter school’s eight years in operation, according to a Tulsa World review of Oklahoma Ethics Commission data.

The majority of the donations came from the school’s two co-founders, Ben Harris and David Chaney, but their spouses and other top Epic administrators also donated.

Harris explained the change in political tactics during an interview with the Tulsa World.

“I’ve always been politically active, and I think what we’ve come to realize is that we kinda felt like it was us against the entire traditional education establishment,” Harris said. “And we wanted to get active and support political candidates just as aggressively as they did.”

It remains to be seen how contributions to candidates during the past election cycle will pan out for Epic Charter Schools.

Bills have cleared legislative hurdles this session that are aimed at piercing the corporate veil of the for-profit company Harris and Chaney own, which manages Epic schools, by requiring more financial transparency.

“It’s not an exact science,” Harris said, referring to how he and others decide where to send political donations. “Ultimately, how they vote makes a determination of whether or not you made the right choices.”

Harris and Chaney have donated a combined $227,374 to political campaigns, political action committees and other causes since Epic One-on-One Charter School opened eight years ago. In addition to being a school co-founder, Chaney is superintendent of the virtual and blended charter schools.

Nearly two-thirds of the donations from Harris and Chaney came during the last election cycle, a World analysis shows.

“I’m proud of all of the broad support we have from inside education and outside. They are no different from many other contributors,” Hofmeister said. “Like any other contributor, I think a big factor is who I’m running against and their desire to see a Republican in office.”

Asked about her interactions with the school, Hofmeister said she accepted an invitation to greet Epic teachers at a professional development day right before school began, which is something she does routinely for other districts.

Since its inception, Epic Charter Schools has grown each year and now serves about 23,000 students across the state. About two-thirds of the students are enrolled in the virtual school district Epic One-on-One Charter School, while the remaining students are enrolled in so-called “blended learning centers” in Tulsa and Oklahoma counties, where students can meet in-person with certified teachers in addition to learning from online instruction.

Tulsa World reported Wednesday that state and federal officials are investigating the school.

Harris donated to about 50 candidates during the last election cycle. Both he and Chaney have an interest in the for-profit vendor Epic Youth Services LLC, which manages the schools in exchange for 10 percent of gross revenues.

It’s that arrangement between the nonprofit charter school and for-profit management company that has drawn interest from lawmakers in the form of new legislation.

Harris said the uptick in donations is merely an attempt to catch up with traditional education political supporters.

“Unfortunately, to compete with a collective group of that size, you have to compete at a high level, and so we built a lot of relationships and we got active in the process for candidates that we felt like would be supportive of our issues,” Harris said.

Harris said they typically seek support on three issues before deciding whether to contribute to a campaign.

• Do you believe that parents should have the right to choose, among public schools, which one fits their child the best and that money should follow the student?

• Do you believe that competition between public schools creates long-term value for families?

• Do you believe in equitable funding among public schools?

Hofmeister raised about $624,000 for her successful 2018 campaign for state superintendent of public instruction. The Tulsa Republican serving her second term received about $42,000 from those with ties to the charter school.

And while it is common for those who work in education to contribute to candidates for state superintendent and other political campaigns, few rival the scale of donations from Harris and Chaney.

Harris made 59 donations totaling about $60,000 in 2018, records show. Only eight other individuals made more contributions that year, according to records.

Chaney contributed about $82,000 in 2018 to various candidates, or more than double the combined contributions of the other 107 school superintendents who donated to campaigns and an education political action committee the same year, the World analysis shows.

Prior to 2018, campaign donations from Epic Charter School backers came largely from Harris and Chaney.

In 2013, an off-election year, Epic donations climbed to about $31,000. Harris contributed $5,000 to a committee supporting the Oklahoma Speaker’s Ball Inc.

Bobby Stem, who served as chairman of the Epic school board at the time, is now a registered lobbyist for the for-profit Epic Youth Services LLC.

Stem did not lobby on behalf of Epic while he was on the board, Harris said. Since leaving the board, he has lobbied for Epic and donated about $29,000 to the same campaigns and PACs that were financially supported by other Epic backers, records show.

Stem is also a lobbyist for other entities, including the Association of General Contractors and the city of Tulsa.

Contributions in 2014 from Epic backers totaled nearly $31,000, with Hofmeister receiving nearly a third of the total amount.

Harris donated $5,000 to Hofmeister in 2014, the maximum amount permitted at the time by individuals. Chaney contributed about $3,900 to Hofmeister’s campaign in 2014.

Asked about a political action committee he contributed $5,000 to in 2017, Harris said he was not familiar with the organization. Records show the PAC supported Republican state candidates.

Harris said he was also not familiar with another PAC, Renew Oklahoma. Records show he has been the chairman of the organization since 2015. The PAC has shown little activity.

Among the recipients was state Sen. Gary Stanislawski, R-Tulsa, who received $1,000 from Harris. The senator sponsored legislation in 2012 that authorized such statewide virtual charter schools.

Chaney and Harris contributed $500 each in 2013 to Stanislawski, who is the current chairman of the Senate Education Committee.

Harris said he supports a current piece of legislation authored this year by Stanislawski, Senate Bill 143, which would require charter schools that contract with management companies to report certain financial data to the state.

Harris said he supports the bill because Epic already provides the information voluntarily to the state.

“If it’s about putting in statute the aspect of having to allocate our management expenses, we’re fine with that; we already allocate them across 30 codes,” Harris said. “We’re actually going to get more diligent to make it even more granular. It’s very time-consuming, but that’s OK.”

Harris said the only bill they’ve lobbied against this year was House Bill 1395 by Rep. Sheila Dills, R-Tulsa.

The bill would beef up financial reporting requirements for charter school management organizations, in addition to other measures.

Harris said he believes Dills’ bill “puts requirements on us that go beyond what other schools are required to do.”

Just ahead of the school's 100th anniversary, Holland Hall's Walter Academic Building was named to the National Register of Historic Places.

Students at Oklahoma State University’s Stillwater and Tulsa campuses will see a 2.5% increase in tuition and mandatory fees.

Epic is a public virtual charter school that receives state funds for every student. It also earns a smaller portion of yearly federal funding.

The board voted in November to accept the recommendation to retire its previous Native-themed mascot. Red and black will remain the primary color scheme.

OU-Tulsa president to resign at end of July

Epic Charter Schools wants to protect its interests “if it is determined that EYS has expended monies from the Learning Fund on unauthorized items." #oklaed 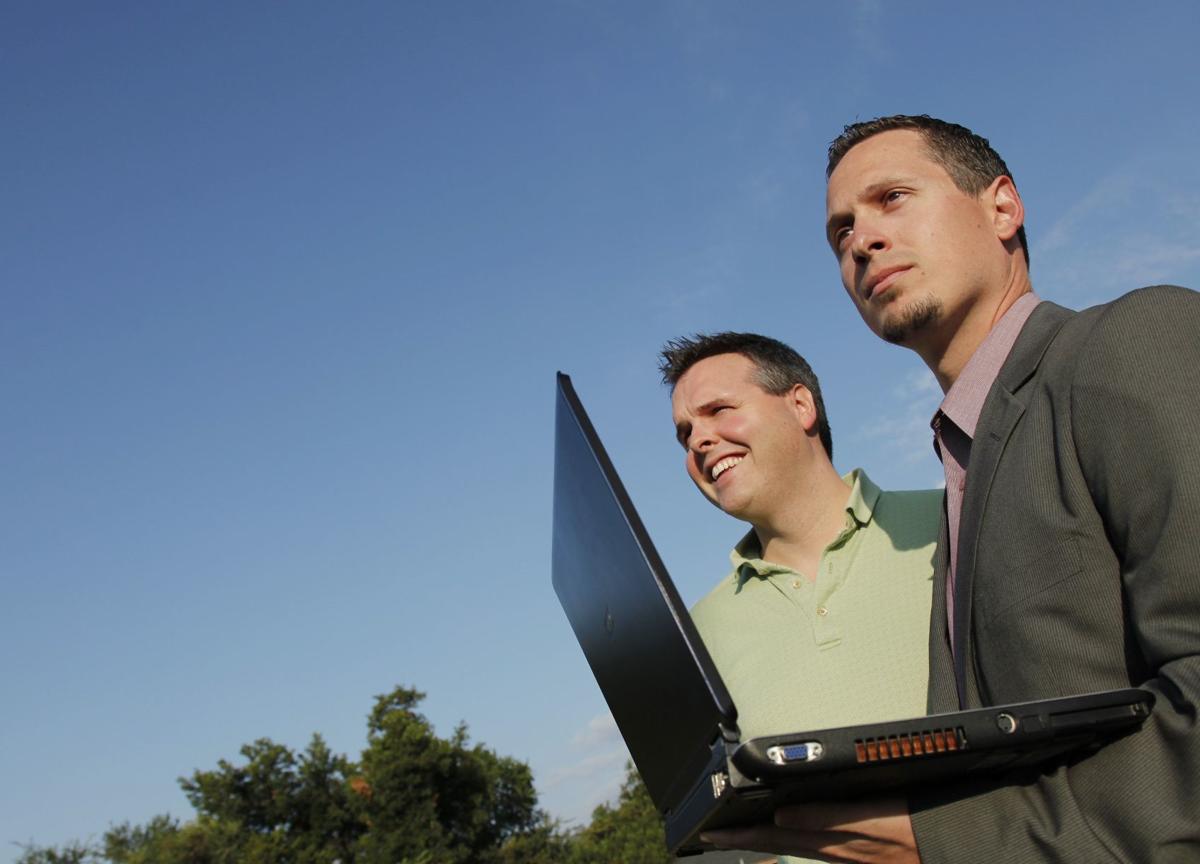 Epic Charter Schools founders Ben Harris (left) and David Chaney are pictured in 2010. They own Epic Youth Services, which the school contracts for its operation and gets a 10 percent share of the school’s collected revenues as an “indirect cost allocation.” The Oklahoman file 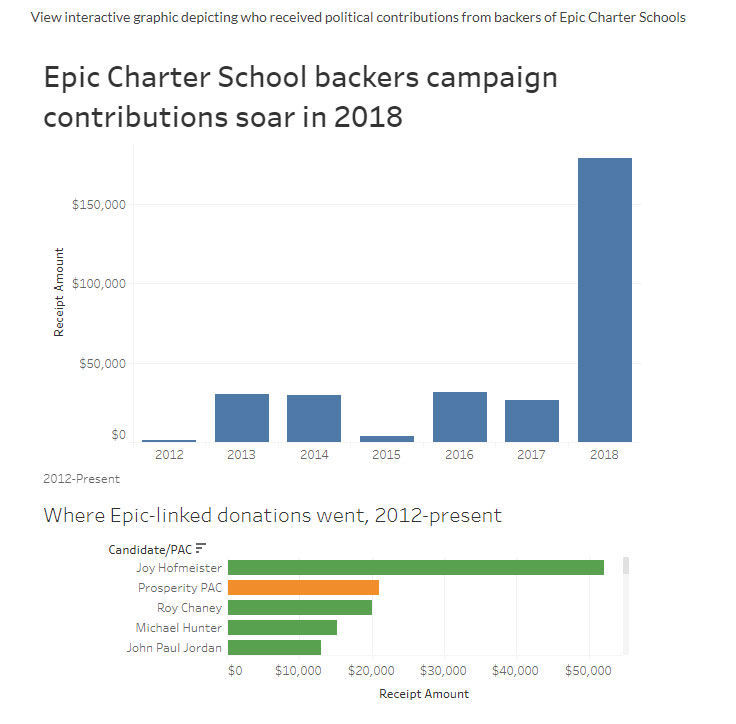 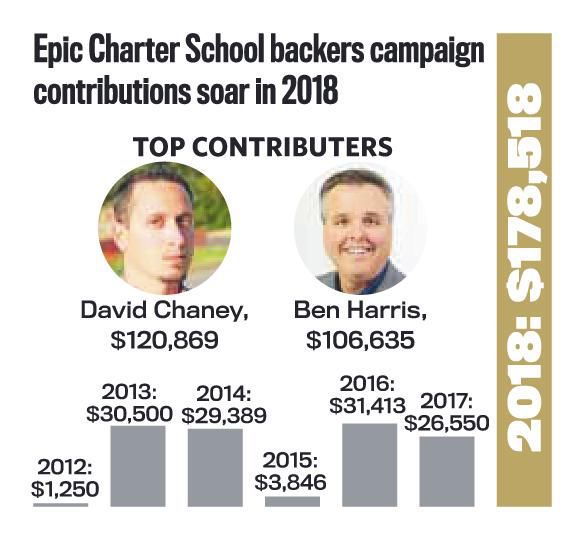