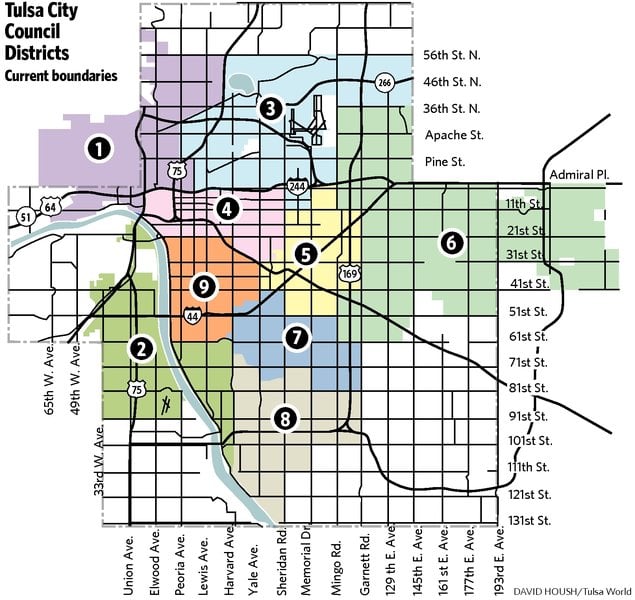 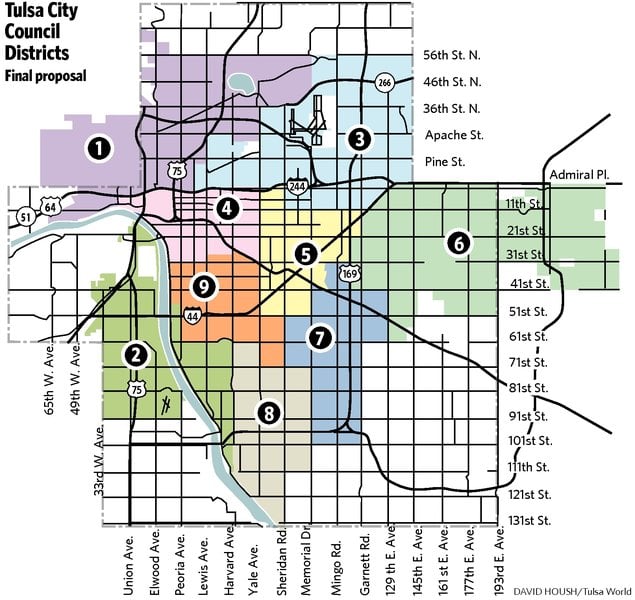 "The thing about this plan, it has the population deviation (between the largest and smallest districts) down to 1.84 percent, which is the lowest deviation of any plan we looked at and is by far the most compact," Woodard said after the commission's meeting.

The approved map moves 42 precincts and 74,618 people out of their existing districts while leaving District 2 intact.

Otey's plan, which died for a lack of a second, had a population deviation of 2.66 percent and would have moved 24 precincts and 41,676 people.

He said his plan "just keeps the traditional boundaries as much as you possibly could."

The new council district boundaries take effect June 10, when they are to be submitted to the city clerk.

Friday's meeting came just three days after the Election Commission held a public hearing to present its final draft proposal. That plan would have moved 47 precincts and 83,626 people out of their existing districts.

The modified maps, which affected only districts 2, 8 and 9, were suggested by the commissioners based on the comments they received Tuesday.

The proposals by McKay and Woodard were nearly identical. After Woodard expressed support for either, McKay explained why she thought her plan was better.

"It was thought that if we made these council districts in the south vertical, ... as growth continues (in the east and south), we won't have such disproportionate change in population over that 10-year period between censuses," she said.

Reaction from councilors was mixed.

District 3 Councilor Roscoe Turner continued to complain that the new district map dilutes his base in the black community. But he stopped short of saying he would file a legal challenge.

"Naturally, I'm not just going to stand here and let them doing anything they want to me," he said. "But I haven't talked to my attorney yet."

"But I understand it, and I think they made a very logical explanation why" the changes were made, he said.

The district boundaries are being redrawn to reflect recently released 2010 U.S. Census figures. The commission redrew the council districts according to criteria set out in local, state and federal law. Those include making each district contiguous and compact, as nearly equal in population as possible and in conformance with precinct boundaries and Voting Rights Act requirements.

kevin.canfield@tulsaworld.com SUBHEAD: The Election Commission's vote on the map split along party lines.

Mayor Bynum: No lockdown is being considered, but mask order penalties and event size limits are possible next week

He acknowledged that there is a level of disconnect between the government's asking people not to get together for Thanksgiving but still allowing large events, albeit with the requirement for an approved safety plan that doesn't apply to private holiday gatherings.

Councilor Johnnie Parks, the only one who supported the resolution, acknowledged doubts that the city of Broken Arrow would "ever" approve a mask mandate.

Councilors and the mayor are expected to consider additional enforcement measures and capacity limits for indoor and outdoor venues.