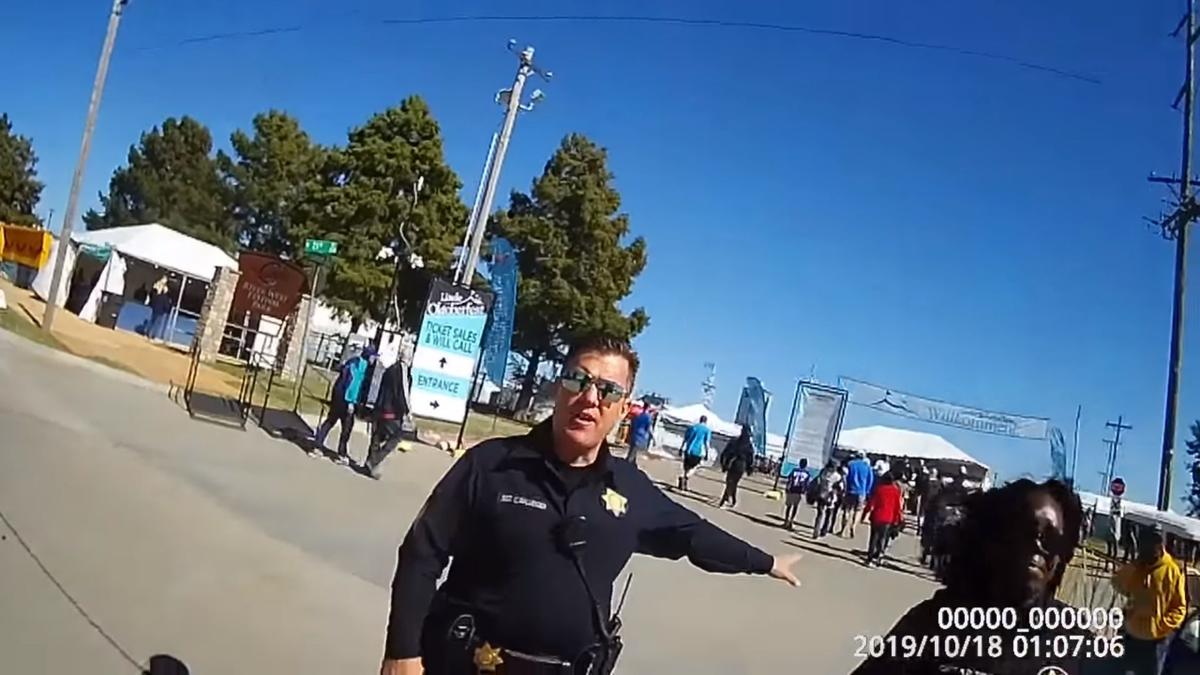 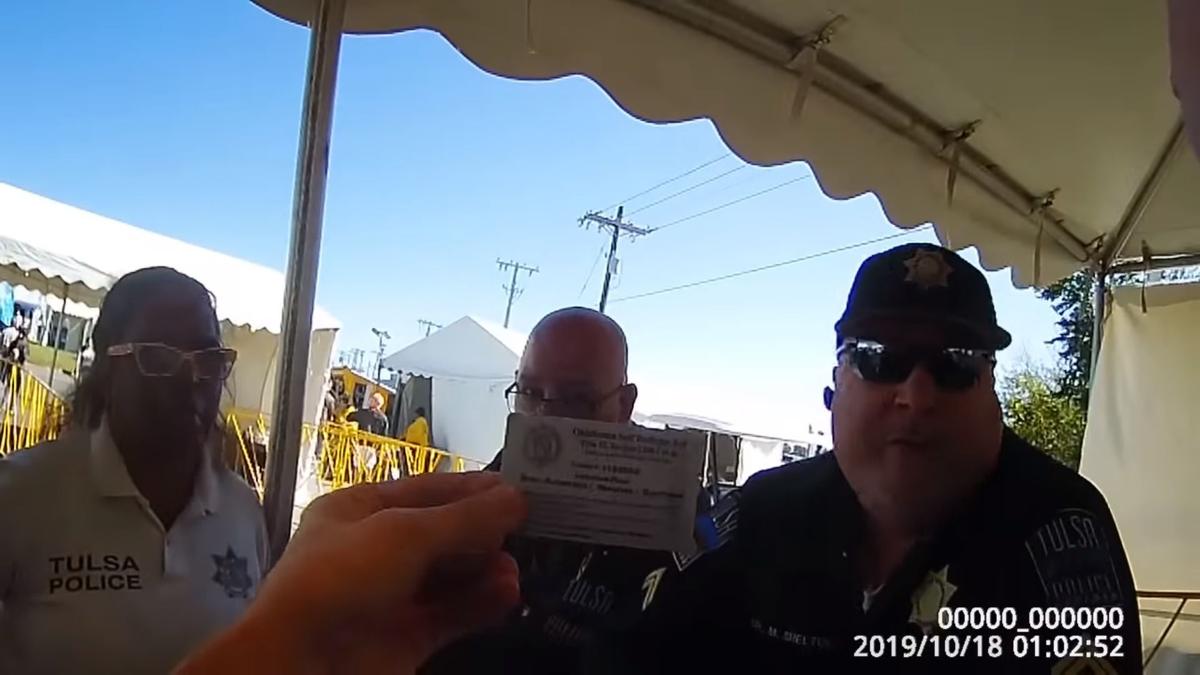 In this video screengrab, Oklahoma Second Amendment Association President Don Spencer shows his Self-Defense Act license to retired and active Tulsa police officers while trying to enter Oktoberfest at River West Festival Park on Friday. He was denied entry and told to leave the area or be arrested on a trespassing complaint. Courtesy

In this video screengrab, Oklahoma Second Amendment Association President Don Spencer shows his Self-Defense Act license to retired and active Tulsa police officers while trying to enter Oktoberfest at River West Festival Park on Friday. He was denied entry and told to leave the area or be arrested on a trespassing complaint. Courtesy

Oklahoma is now a constitutional carry state, but these places don't allow your firearms

The leader of an Oklahoma Second Amendment advocacy group said Tuesday he plans to take legal action after Tulsa police officers refused to allow him to enter Oktoberfest while in possession of a concealed handgun.

Oklahoma Second Amendment Association President Don Spencer posted a video on YouTube of an encounter Friday between him, at least two retired officers working event security and at least three Tulsa police officers. In the video, which is almost nine minutes in length, Spencer presents his Self-Defense Act license and tells the officers state law allows him to be on the premises at River West Festival Park with a concealed firearm.

But about six minutes and 45 seconds into the clip, Sgt. Chris Witt says to Spencer, “You can step outside here or you can go to jail for trespassing. Your choice. Right now.”

Spencer asks Witt multiple times for his name and badge number, which Witt eventually provides. Witt is heard telling Spencer before doing so that “I know what the law is,” and again says Spencer can be jailed on a trespassing complaint.

Once Spencer leaves the entrance tent, Sgt. Clay Ballenger approaches him and says: “If you come back on the Oktoberfest property that they’ve got, you’re gonna be arrested.”

The Tulsa Police Department has not offered comment on the incident, but Spencer posted an image on Facebook indicating he filed a citizen complaint against the officers who interacted with him.

“There is no reason for me not to be able to enter Oktoberfest, get a bottle of water, eat some awesome bratwurst and enjoy the music,” Spencer told the Tulsa World, noting it is illegal to consume alcohol and carry a gun simultaneously.

He alleged the city of Tulsa and the River Parks Authority, which maintains River West Festival Park, acted in violation of Oklahoma laws related to firearms. Spencer pointed the World and officers to Section 1290.22 of the Oklahoma Self-Defense Act — which addresses business owners’ rights — and Section 1277 in Chapter 53 of state law regarding the manufacture, sale and wearing of weapons.

But multiple officers told Spencer in the video that Oktoberfest is “not public” because the organizers leased the property for the event and there is an entrance fee.

“We’ve gone through the expense to put a perimeter fence,” Cpl. Mark Shelton says to Spencer in the video. “We’ve established the rules that we want. We’re allowed to make exceptions to who comes in and who doesn’t.”

Matt Meyer, executive director of the River Parks Authority, expressed a similar view. He told the World that Oktoberfest is a “ticketed and gated” private event and that organizers can therefore set their own rules.

But Spencer said nothing in the law allows for restrictions on carrying guns based on whether an outdoor venue in a public place has a fenced perimeter.

“At FreedomFest, the Fourth of July celebration, people can wander around with their weapons if they want. It’s only at a ticketed, private event that firearms are prohibited,” Meyer said. However, he said the department regularly consults with legal counsel and will continue to evaluate its policies.

Section 1290.22 of the Self-Defense Act indicates “no person, property owner, tenant, employer, holder of an event permit, place of worship or business entity” can establish any rule or policy that prohibits carrying either concealed or unconcealed weapons on certain types of public property. Section 1277 defines those properties as areas designated by a governmental authority as parks, recreational areas, wildlife refuges, wildlife management areas or fairgrounds.

But amendments to the state’s firearms laws take effect Nov. 1. House Bill 2597 will allow what has been called “permitless carry” or “constitutional carry” of firearms for adults 21 and older who aren’t otherwise barred by state or federal law from possessing them.

House Bill 2010 amends Section 1277 to specify individuals can carry concealed, but not unconcealed, weapons in municipal zoos or parks owned, leased, operated or managed by a public trust or nonprofit entity. The River Parks Authority defines itself on its website as a public trust “created to develop and maintain the public parklands along the Arkansas River in Tulsa County.”

“I’ve been patient and we’ve done everything we can to avoid this situation,” Spencer said of the issue. “But we’re going to make sure we can exercise our rights. Our state Legislature and governor do not bring laws up only for the city of Tulsa to ignore.”

These places don't allow your firearms, despite the new constitutional carry law

Legislation removing all licensing and training requirements for handguns was the first law law signed by Gov. Kevin Stitt.