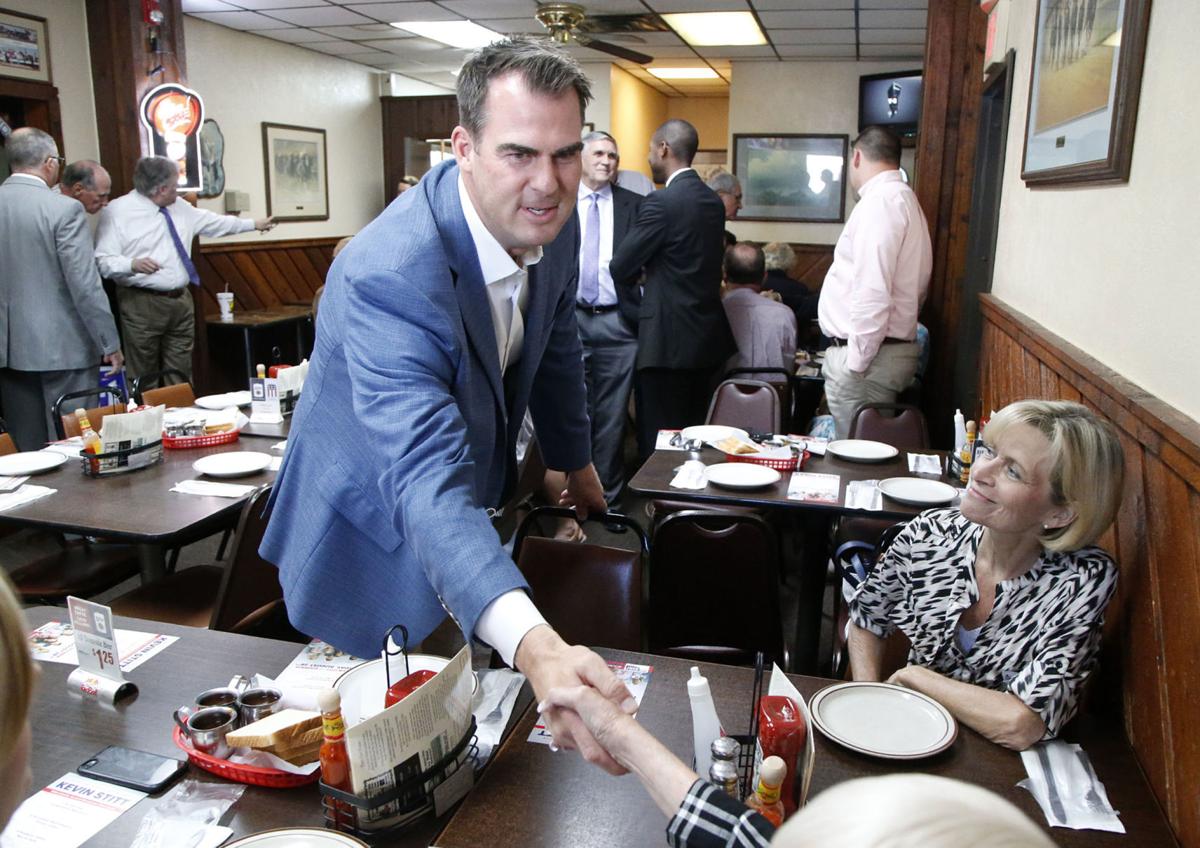 Gubernatorial candidate Kevin Stitt (left) greets supporters including Jan Dunkin at Jake’s Rib in Chickasha. “I don’t think anything will change if we keep electing the same people,” he told the crowd. MATT BARNARD/Tulsa World 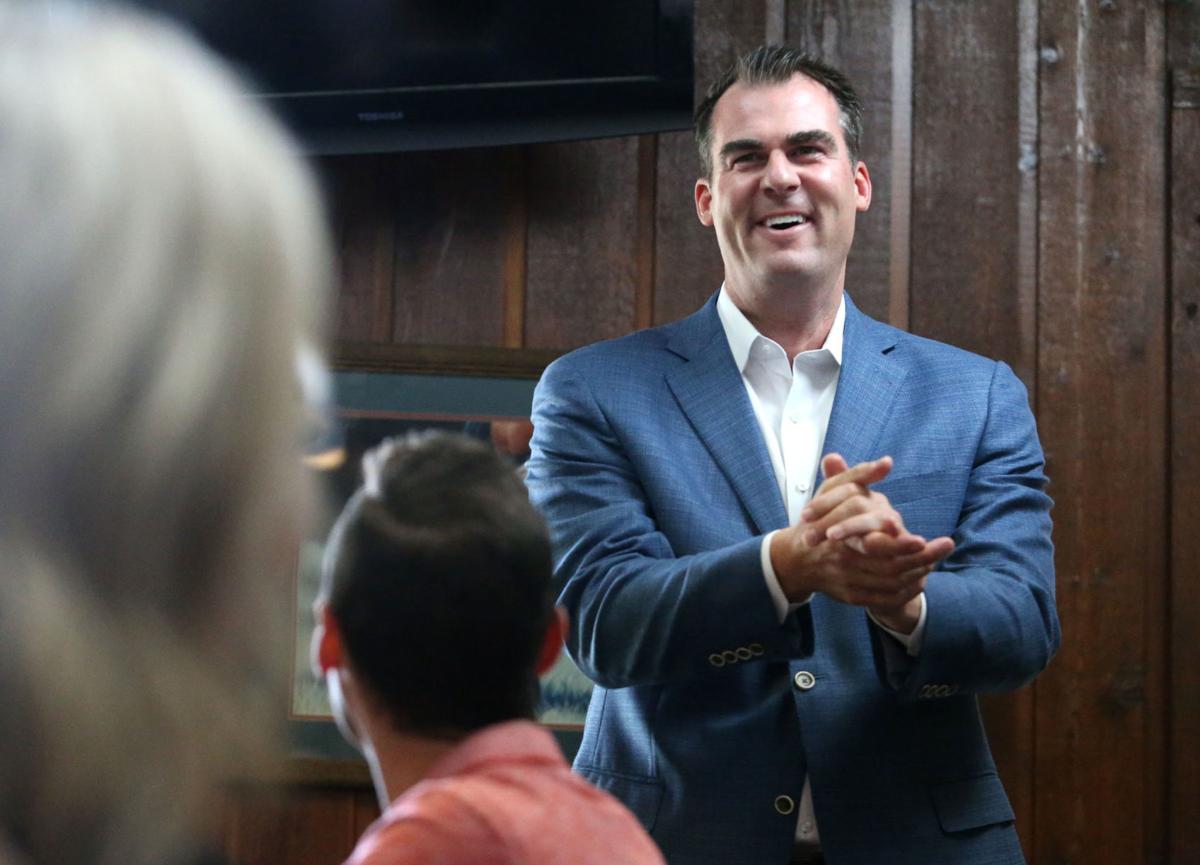 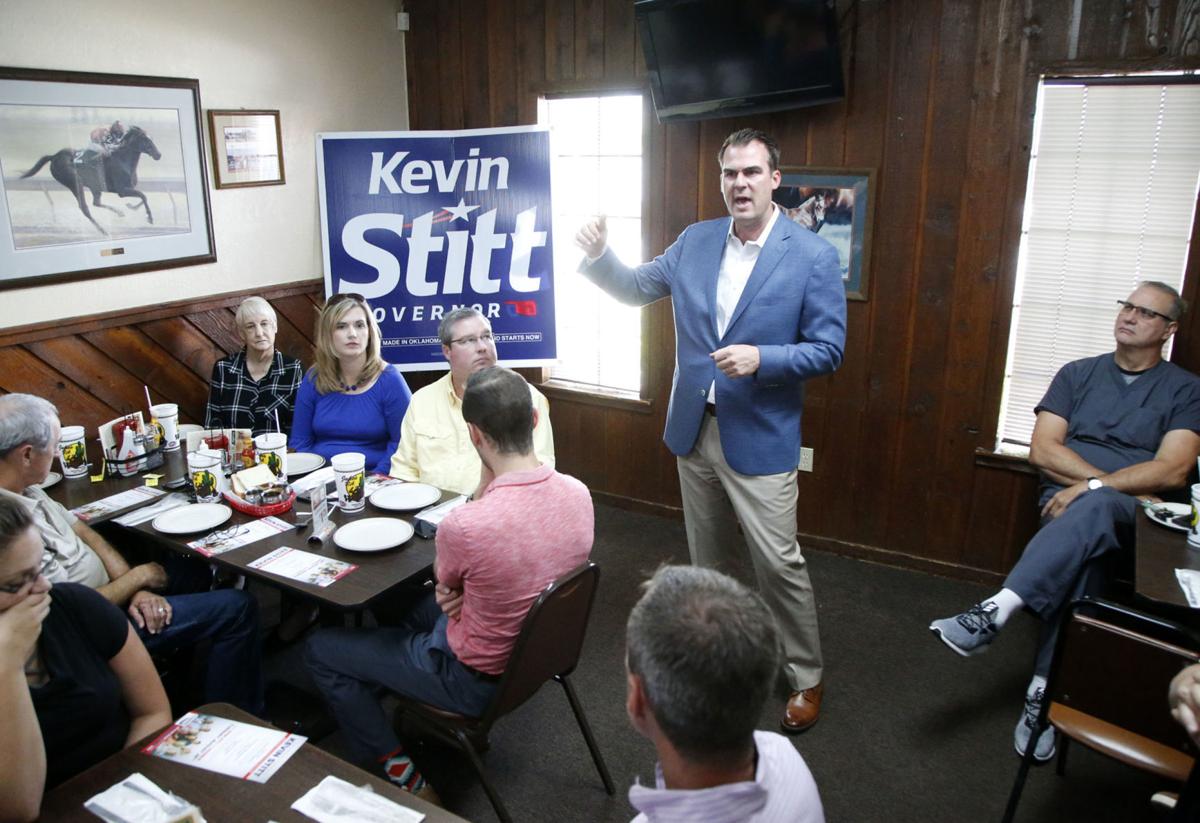 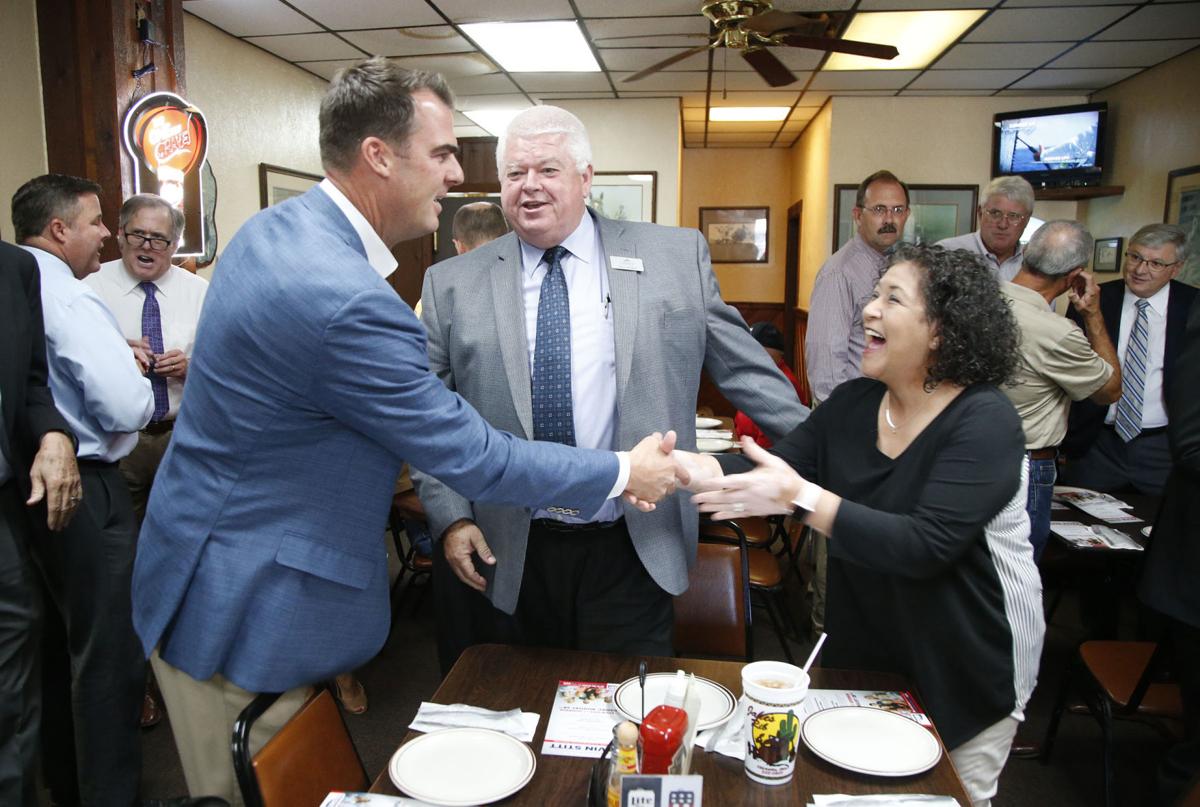 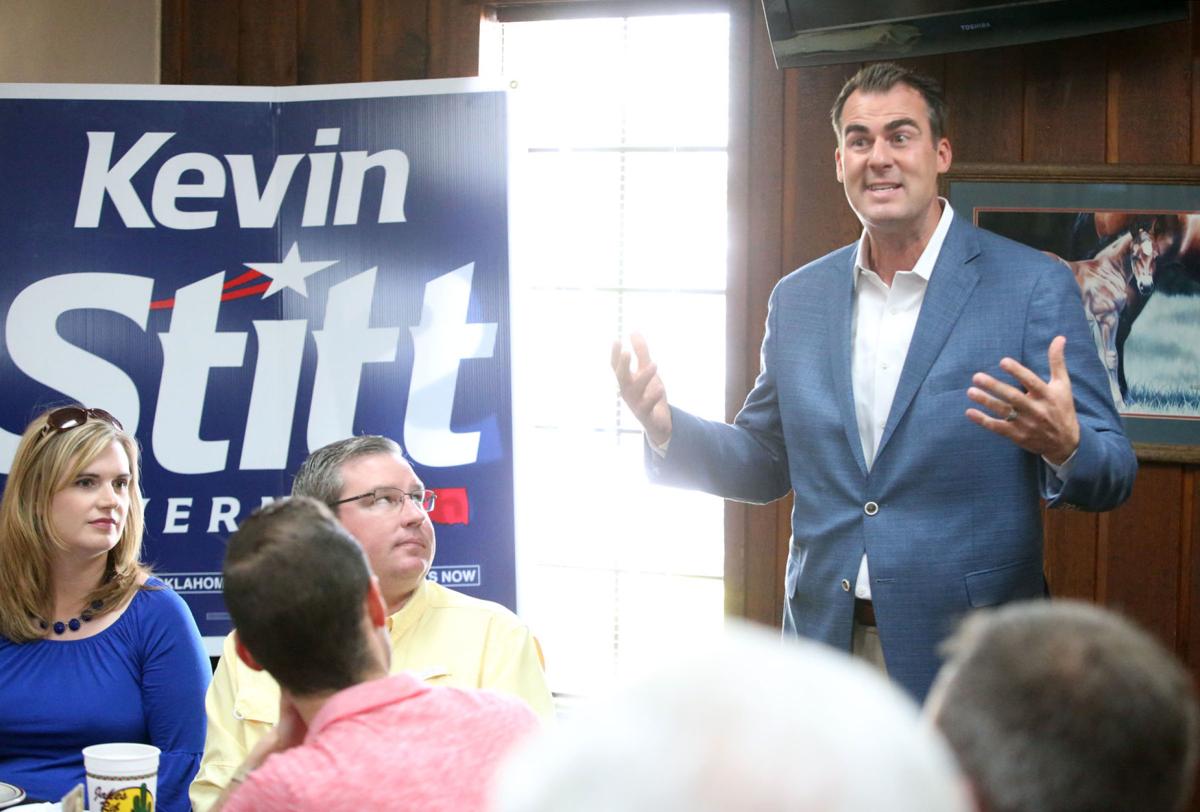 Gubernatorial candidate Kevin Stitt (left) greets supporters including Jan Dunkin at Jake’s Rib in Chickasha. “I don’t think anything will change if we keep electing the same people,” he told the crowd. MATT BARNARD/Tulsa World

Continuing coverage of the governor's race

The two-man runoff in the Republican governor's race is Aug. 28. Today, we profile Kevin Stitt. Last Sunday, we profiled Mick Cornett. The winner's top opponent in the Nov. 6 general election will be Drew Edmondson, who won the Democratic primary in June. The World will continue its in-depth coverage through November. Find all our coverage at tulsaworld.com/election2018

Kevin Stitt got started in business selling books door-to-door on what amounted to straight commission. It was not an easy gig.

But it seems to have suited Stitt, then an accounting student at Oklahoma State University. He says he recruited about 50 of his friends to do the same thing and wound up supervising them.

More than 20 years later, Stitt is knocking on doors again, this time selling himself to the people of Oklahoma as a viable candidate for governor despite having no political or government experience.

“I started looked at the resumes of the people running (for governor), and to me they all looked like the same as the resumes as the previous administration,” Stitt tells 50 people packed into the back room of a Chickasha barbecue restaurant. “I don’t think anything will change if we keep electing the same people.”

It’s a pitch Stitt will make later the same day to a smaller group in Duncan, and that he’s made countless times across the state: His business background, especially his 18 years building a successful mortgage company, makes him a better choice for governor than anyone with experience in politics or government.

It seems to be working, at least with Republicans. Stitt, the ultimate outsider, edged Lt. Gov. Todd Lamb, the perceived ultimate insider, in the GOP primary to snag the second runoff spot behind former Oklahoma City Mayor Mick Cornett.

Now, less than two weeks out from that Aug. 28 vote, polling shows Stitt ahead of Cornett for the right to face Democrat Drew Edmondson and an undetermined Libertarian candidate in the November general election.

Oklahoma has elected governors from outside the usual political orbits before, but never one quite so remotely connected as Kevin Stitt. Until two years ago, he’d made only a few scattered political contributions and hadn’t paid much attention to politics except to the extent they affected his mortgage business.

In fact, he appears to have never even voted for governor, much less thought about running for it.

“About three or four years ago, I began to see a change in Kevin,” Stitt’s wife, Sarah, said during the campaign stop in Duncan. “He would come home from traveling to our offices around the country and he would be frustrated.

“He would say stuff like ‘Nobody’s proud of Oklahoma’s flag. In Texas, they fly the Texas flag everywhere. It feels like people (in Oklahoma) are depressed about their state.’ It started to bother him, and I think that was the start.”

Then, 18 months ago, Stitt told his wife he wanted to be governor.

“I really didn’t know what to say,” she said. “It was totally out of left field. Suddenly, I’m seeing the the future I thought we had for our family totally change.”

Kevin Stitt grew up in Norman, where his father was a pastor. While at OSU, he signed on with what was then called the Southwestern Company, a multi-level marketing firm that recruits college students to sell books and other educational materials door-to-door.

By most accounts it’s hard and often discouraging work. Dealers, as the sales force is called, are sent far from home — in Stitt’s case, Ohio — and considered independent contractors whose only compensation is a share of the profit from what they sell, and “residuals” from the sales of dealers they’ve brought on board.

The organization has its critics, but some dealers do well. And, they get a taste of entrepreneurship.

That’s what happened to Kevin Stitt. After graduating from OSU, he took a job in Tulsa — where he met Sarah — and in 2000 started Gateway Mortgage with, as he tells it, a computer and a $1,000.

Today Gateway is one of the largest private mortgage companies in the country, with 1,200 employees and offices in 41 states. And it has made Kevin Stitt wealthy — so wealthy he’s been able to spend more than $3 million of his own money running for governor.

His detractors say Gateway has used some questionable methods in its climb. Stitt admits the company has had to pay some fines along the way. More than a decade ago, it was banned from doing business in Georgia, although Stitt says the sanction has been lifted.

A few months ago, Stitt bridled when asked about the rumors that he’s been guilty of shady business dealings. Now, on the stump, he encourages people to bring it up.

“We can go back into any state we want,” he says.

As Stitt’s grasp of issues and the workings of state government has improved, so has his ease in front of voters.

“What are our strategic advantages?” he asks them when campaigning. “What makes us different? We have the best location of any state in the entire country. We’ve got all of the land, all the natural resources, and we have low utility prices.

“We should be No. 1 in manufacturing, No. 1 in distribution and No. 1 aerospace.”

To get there, Stitt wants the Legislature and the voters of Oklahoma to give him authority no previous governor has ever had — the power to hire and fire all state agency heads and boards.

Stitt is not the first governor to seek such power. Probably, he won’t be the last to discover just how unwilling the lawmakers and the people of Oklahoma are to accommodate such designs.

And there are still gaps in Stitt’s understanding of state government. He says teachers have to be paid a competitive salary and the public education system has to be better, but paying for that seems to depend on manipulation of the “funding formula” to “incentivize more competition.”

But he’s been learning and appears more undaunted than ever.

“People say, ‘He’s a business person, he may be like a bull in a china cabinet’ ” Stitt said. “I think all of the principles I know and how I lead in the private sector, I’ll do the same in state government. When you’re focused on winning and don’t care who gets the credit, you can (attract) people around you to do the work.”

Background: Founder of Gateway Mortgage, a national mortgage lending and servicing firm he started from scratch in 2000. It's portfolio now totals about $18 billion.

Quote: "I don't think anything will change if we keep electing the same people."