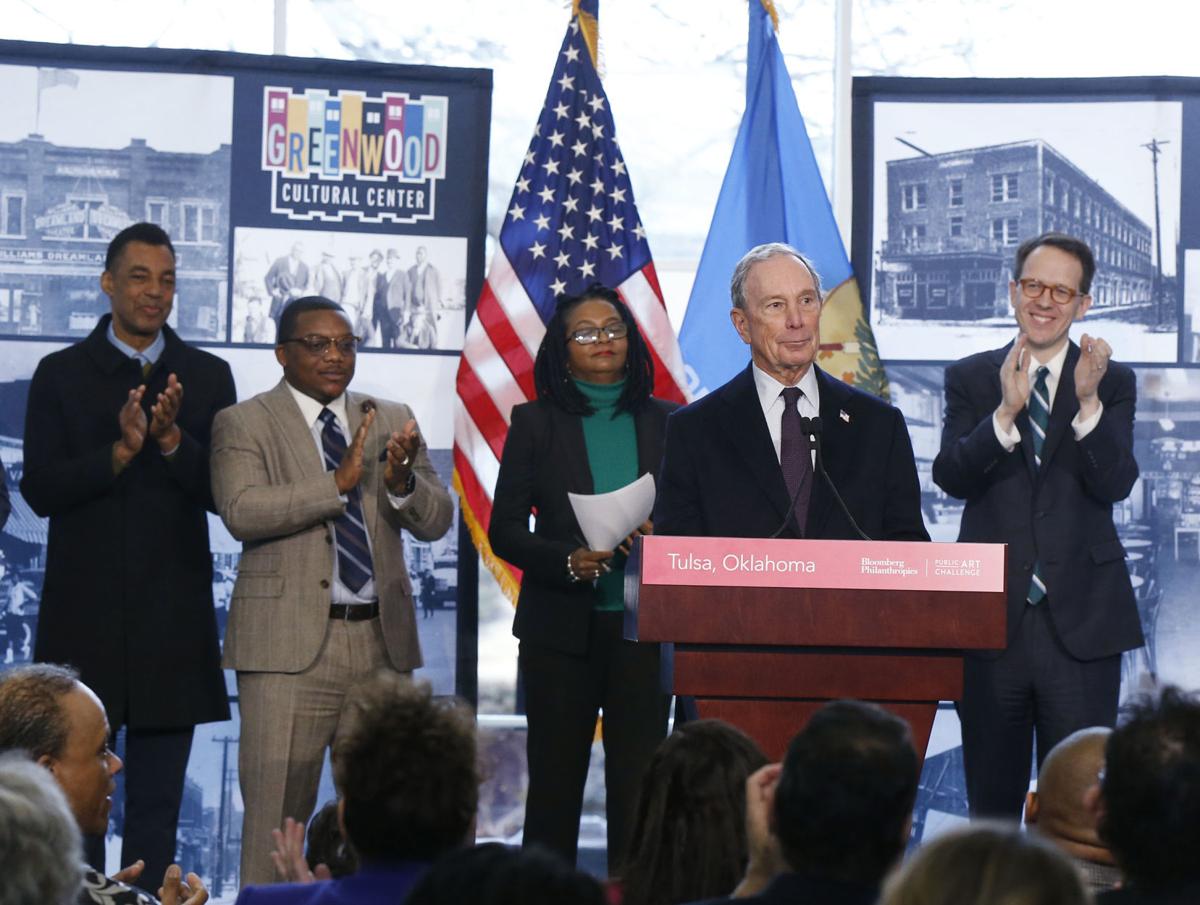 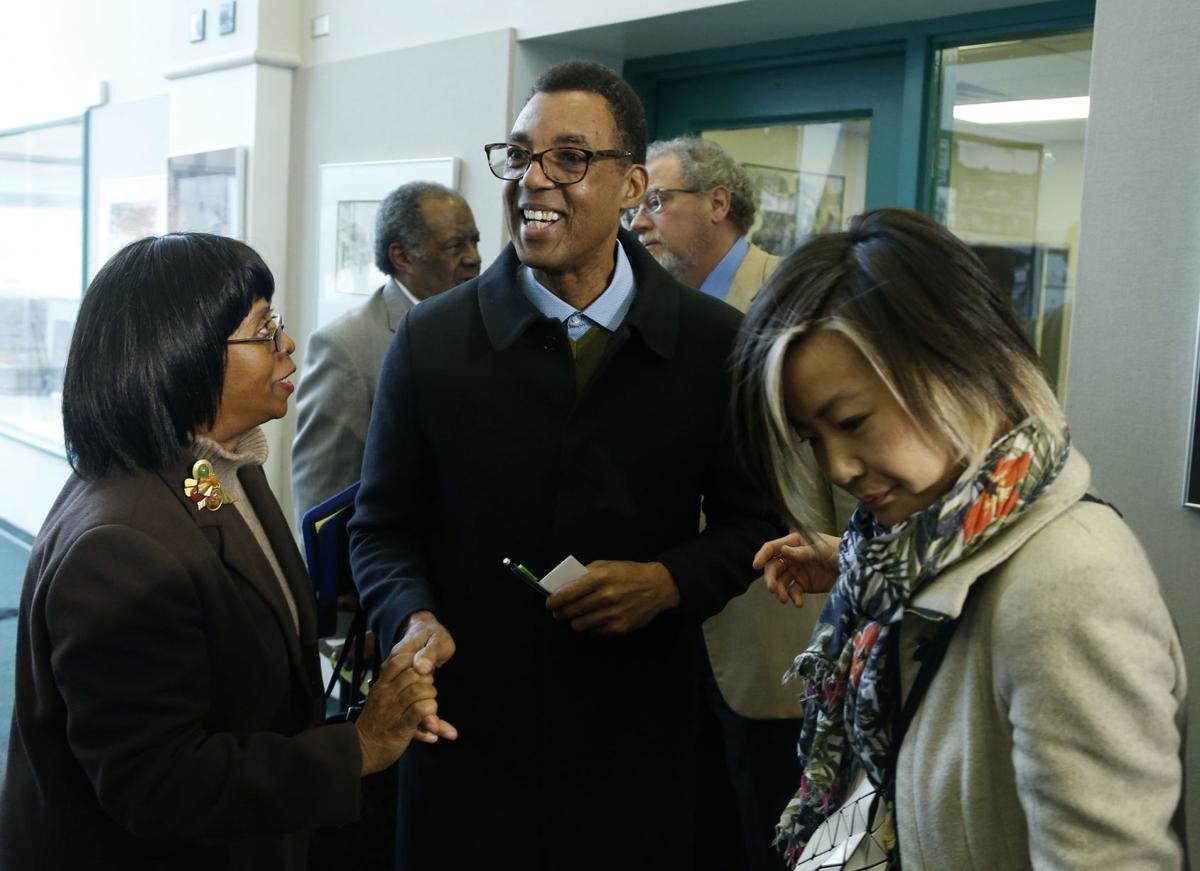 Artist Rick Lowe is greeted by members of the audience after former New York Mayor Michael Bloomberg announced a $1 million grant to the city of Tulsa’s The Greenwood Art Project on Thursday. STEPHEN PINGRY/Tulsa World 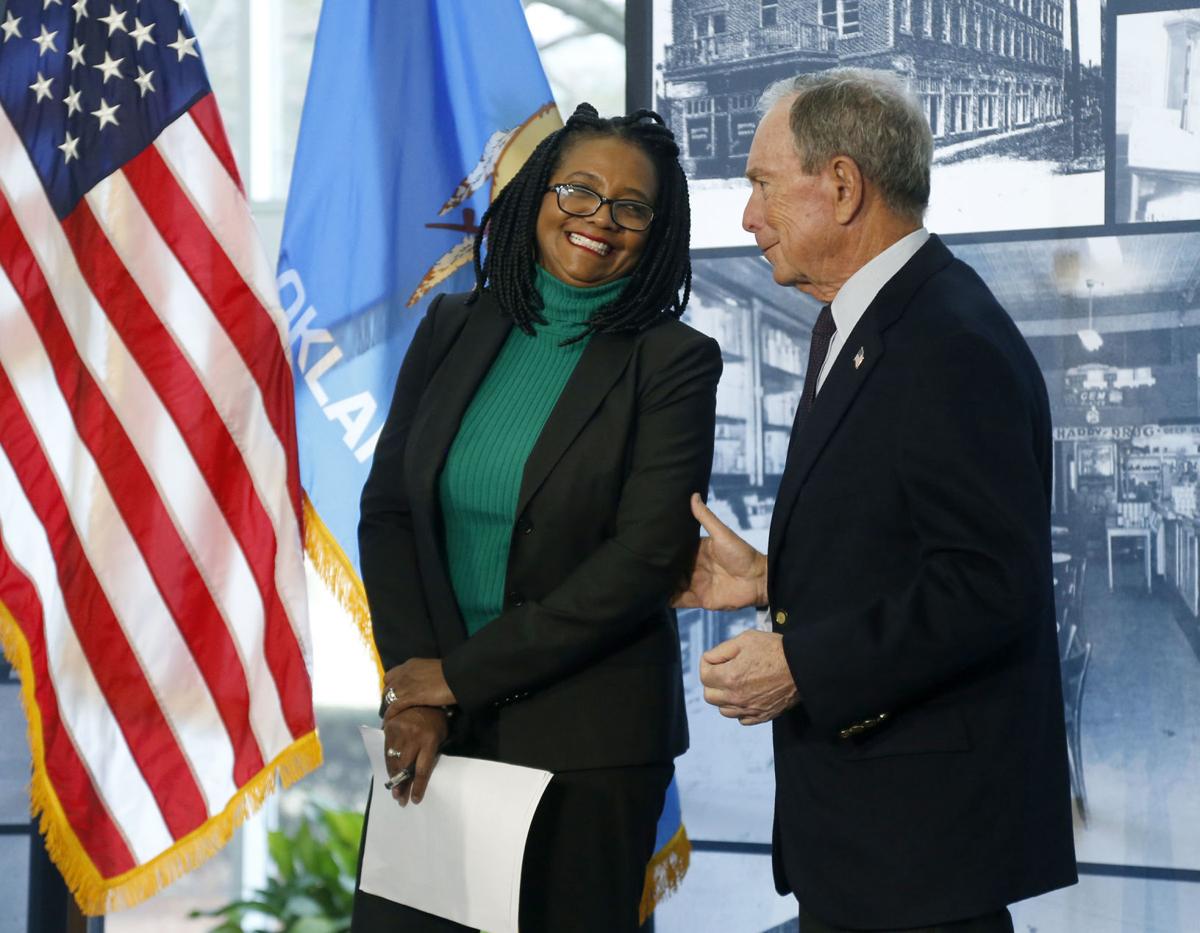 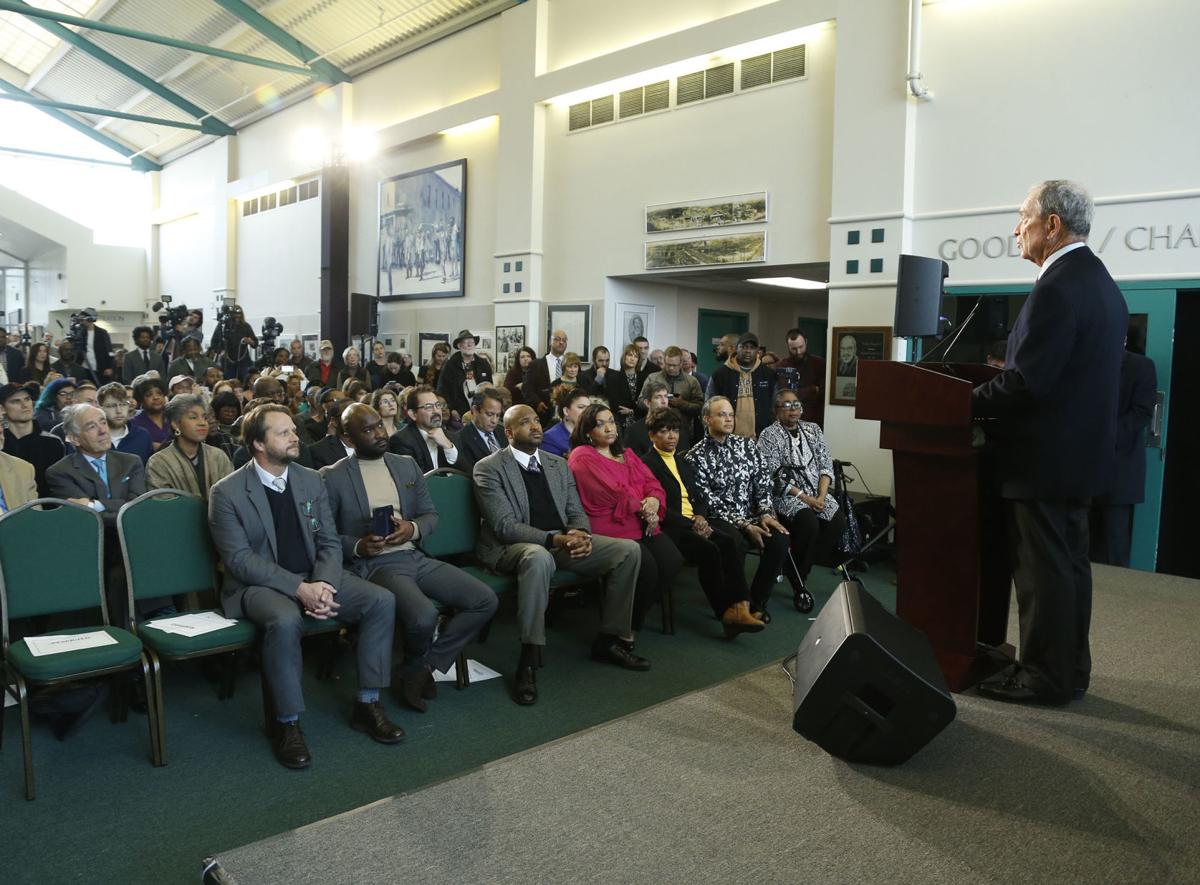 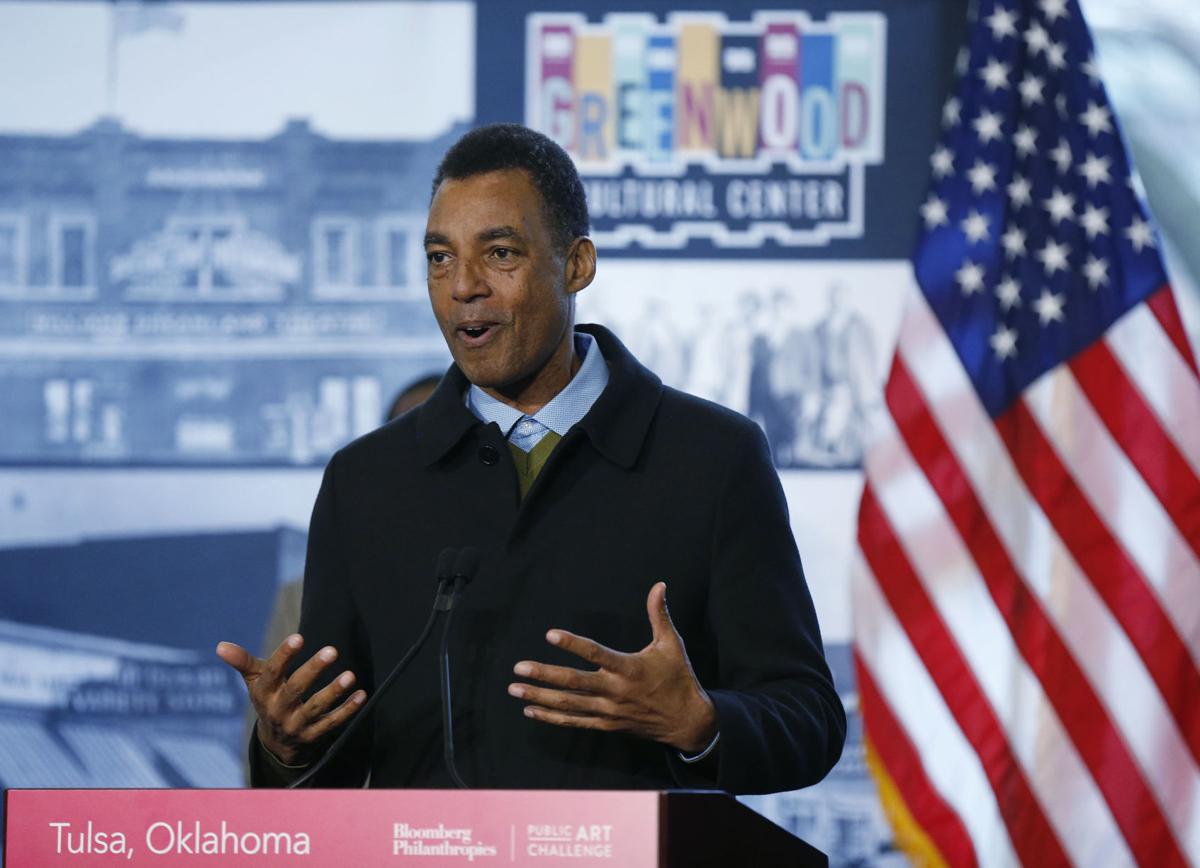 Artist Rick Lowe is greeted by members of the audience after former New York Mayor Michael Bloomberg announced a $1 million grant to the city of Tulsa’s The Greenwood Art Project on Thursday. STEPHEN PINGRY/Tulsa World

Artist Rick Lowe can’t tell you what The Greenwood Art Project will look like, but he can tell you what it won’t look like — eight statues sprinkled around the historic district.

That, he says, is not what this Bloomberg Philanthropies 2018 Public Art Challenge-winning project is all about.

“What we want to create is a kind of energy around the (1921 Tulsa race massacre) centennial where everybody is thinking outside the box,” Lowe said Thursday, after lunch at The Tavern.

That means involving a wide spectrum of people, from artists to developers to community leaders. Lowe calls it “social sculpture.”

“Which means you take the whole environment of a neighborhood and you try to use creativity at its best in every aspect of that neighborhood, whether it’s through real estate development, through architecture, through history, social networks,” Lowe said.

Earlier in the day, Lowe joined former New York City Mayor Michael Bloomberg and local community leaders at the Greenwood Cultural Center to announce that Tulsa was one of five cities across the country to win the challenge, which comes with $1 million.

The Greenwood Art Project will commemorate the 1921 Tulsa race massacre that destroyed the Greenwood District, including Black Wall Street, and also celebrate the district’s resilience and future.

Thirty-seven deaths from the violence of May 31-June 1, 1921, have been confirmed, but almost everyone who’s studied the massacre believes the true number is higher. How much higher is unknown.

“Public art is art that is free and is open to all,” Bloomberg said. “It has the unique ability to reach people and change the way they think about the world around us, and I saw that first hand today with the Gathering Place here in Tulsa.

“That is a piece of public art if there ever was one.”

The Public Art Challenge was open to cities with populations of more than 30,000. The challenge is designed to encourage and promote public art that addresses civic issues and social themes. Applicants must show that their project would not only be creative, but would generate public-private collaboration and bolster the local economy.

But Bloomberg was clear in reminding his audience Thursday that public art is about more than improving a city’s bottom line.

“Public art adds a new energy to city life, it connects people and it provokes conversation and debate, and it can inspire action,” he said.

Lowe, 57, knows this well. He is perhaps best known for Project Row Houses in Houston’s Third Ward. Twenty-five years ago, he set out to give 22 shotgun houses — covering about a block and a half — paint jobs, and new life.

Project Row Houses now extends more than seven blocks and is a thriving community populated by artists and others dedicated to preserving and promoting the neighborhood’s history and identity.

That is the same objective driving The Greenwood Art Project. The work starts with getting buy-in from the entire community, Lowe said

Even businesses could get into the act. Lowe wondered aloud what impact the new BMX facility to be built on the former Evans-Fintube property could have if the people behind the project embraced the changes coming to the Greenwood District.

Lowe and his consultants on the project, Tom Burrup and Jack Becker, say they will hold meetings to hear what the public would like to see, and that local artists will be essential to realizing those visions.

“It could be experiences. It could be sounds,” Becker said. “It could be a mystery, you have to go here to get a clue to go to the next thing.”

Here’s what Lowe does expect the project to have by the time Tulsa marks the centennial of the 1921 Tulsa race massacre in 2021: maps.

Maps that will guide visitors to art of projects throughout the district, each with its own message, but collectively telling the story of Greenwood and its aspirations for the 21st century.

“You want to get the highest level of creativity out of every aspect (of the community),” Lowe said. “And oftentimes it’s artists who can lead the change.”

The 1921 Tulsa Race Massacre Centennial Commission will play a lead role administering The Greenwood Art Project. For more information, or to get involved, go to www.tulsa2021.org.