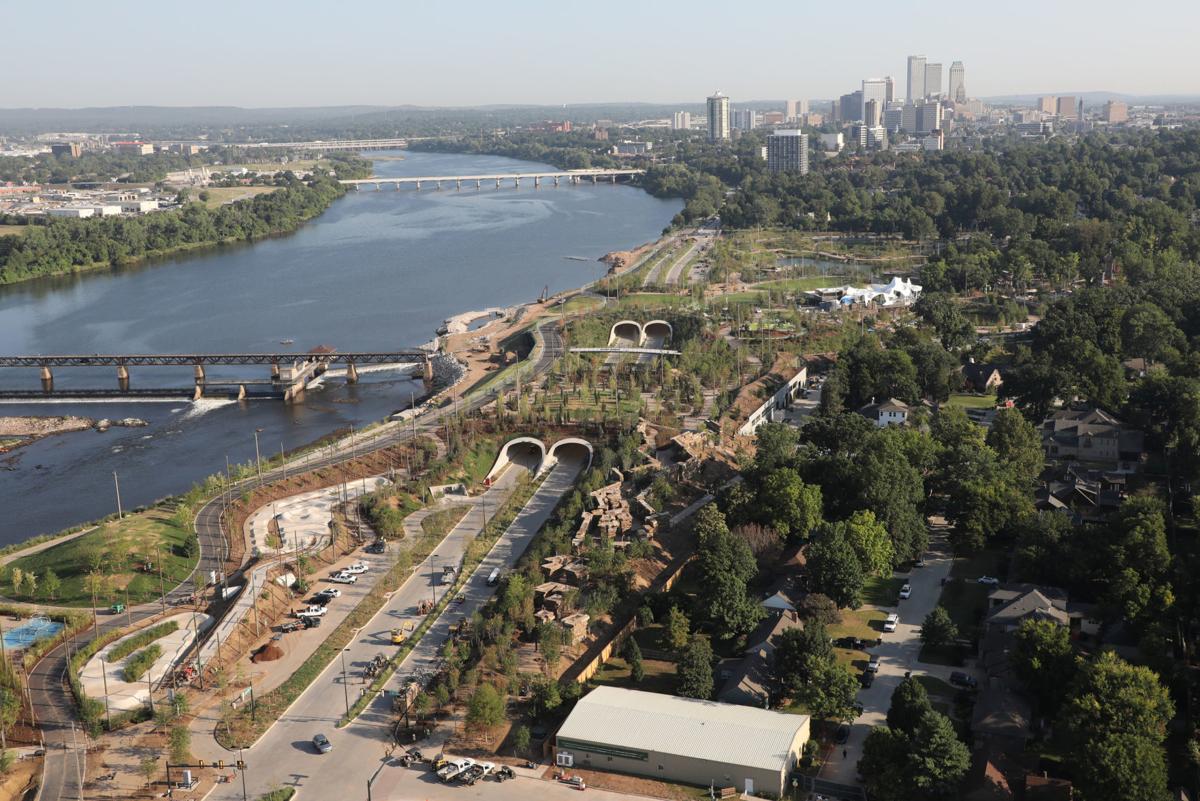 An aerial photograph shows the Gathering Place and Arkansas River with the Tulsa skyline in the distance on Friday. TOM GILBERT/Tulsa World 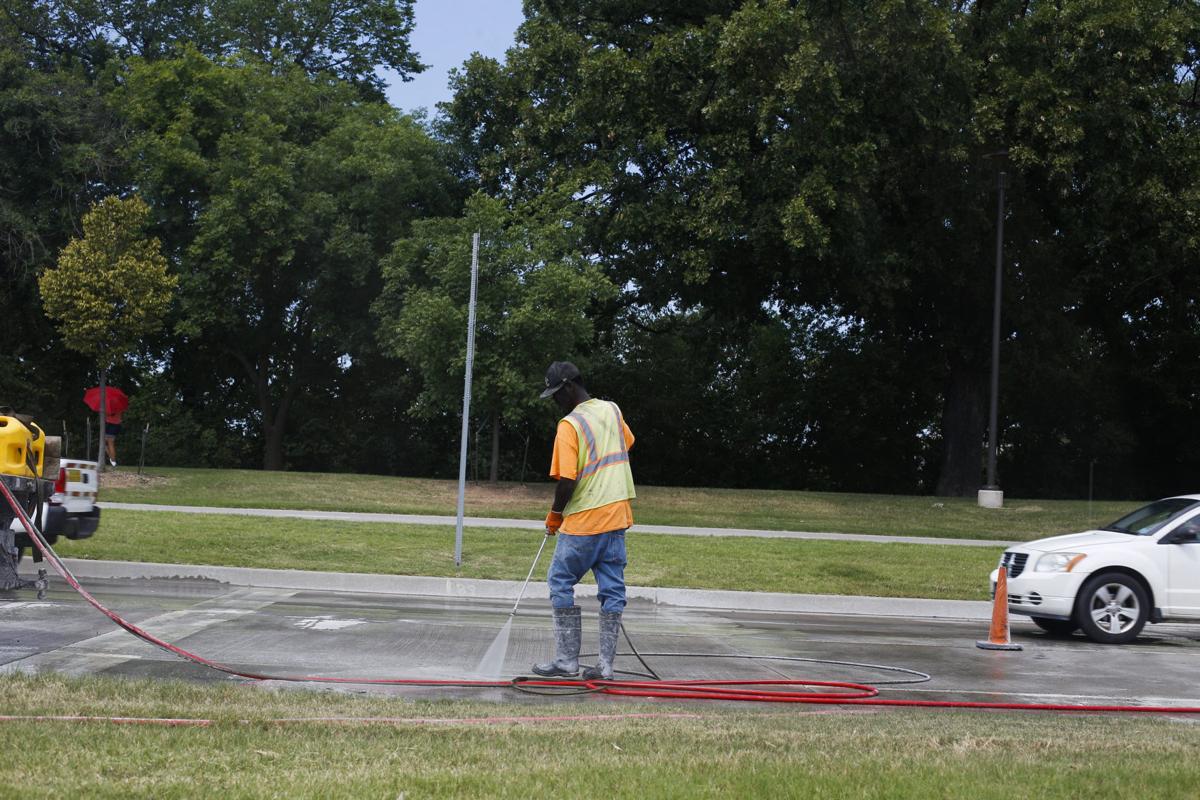 A worker prepares to stripe a section of Riverside Drive that has been closed through the Gathering Place on Monday. The striping will continue most of the month. MORGAN HORNSBY/Tulsa World 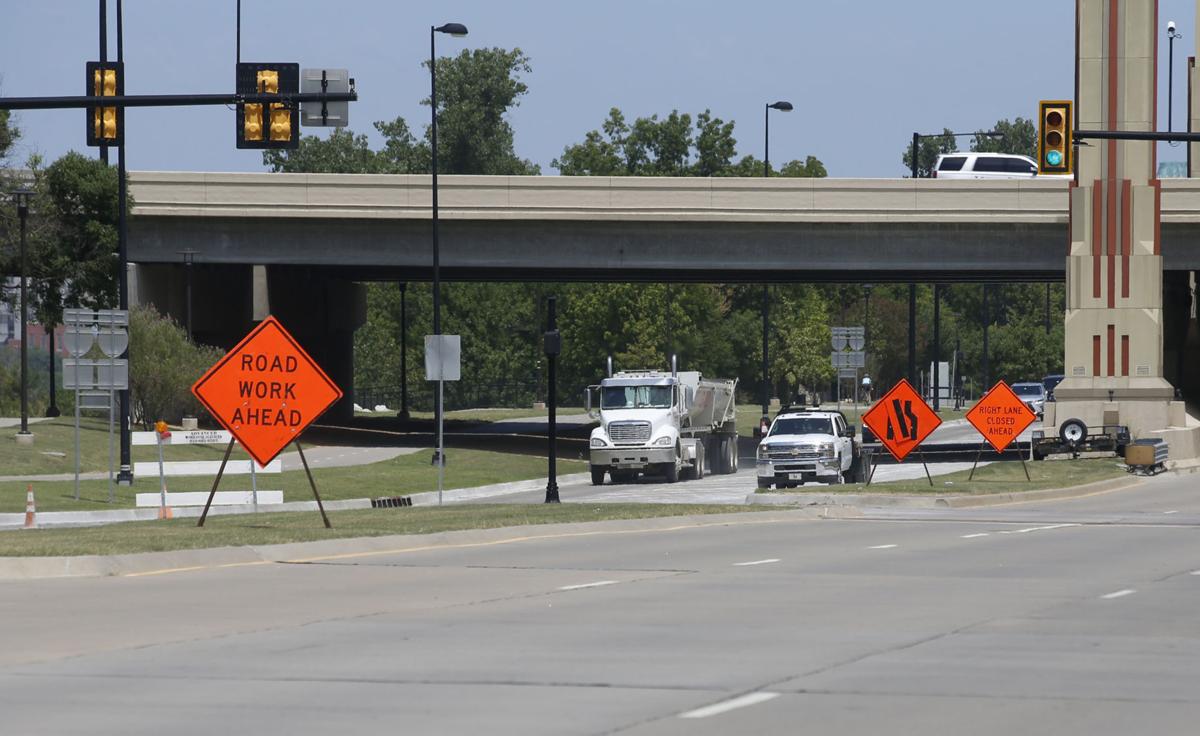 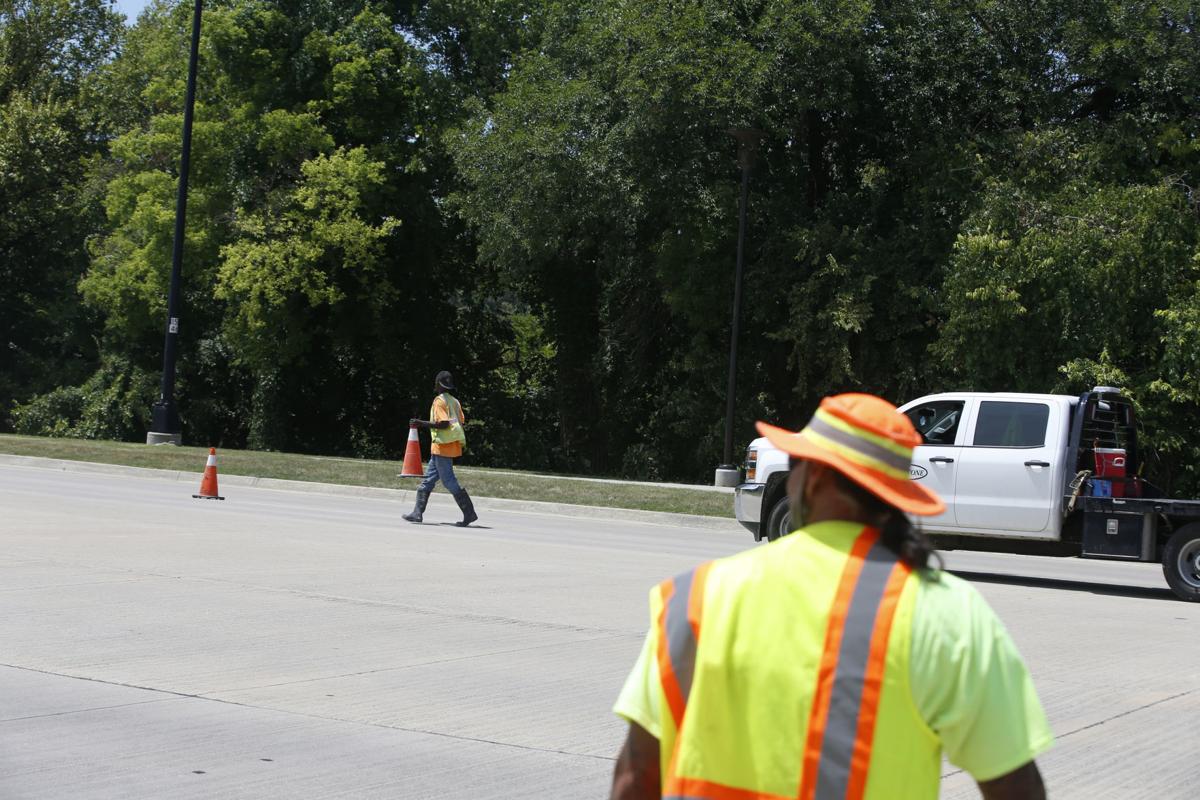 From the sky, it’s plain to see that the Gathering Place and Riverside Drive projects are finally coming together.

Nothing tells the story better than the way the road intersects the park, a clear demarcation between its east and west sides, linked majestically by land bridges. One can even see work vehicles traversing the road.

What’s not visible, though — not even at ground level — is striping.

That’s about to change. A city contractor, Becco Contractors Inc, began work last week and is scheduled to be done Aug. 26.

It’s just in time. The Gathering Place will open Sept. 8. Two days later, at 6 a.m. Monday, Sept. 10, the stretch of Riverside Drive from roughly 24th to 35th streets will be reopened to motorists for the first time in more than three years.

Paul Zachary, director of the city’s Engineering Services Department, said Monday that the striping has been designed to keep motorists safe.

“As a part of the Riverside Drive improvements throughout the Gathering Place, we wanted to incorporate some traffic-calming features,” Zachary said. “So not only are we striping the roadway with thinner lanes, we have also, between the 2700 and 2400 blocks, included a tree lawn adjacent to the roadway.”

The posted speed limit will be 35 mph, Zachary said, but “additional traffic-calming measures can be added” if necessary.

The look of Riverside Drive between 21st and 41st streets will vary slightly along the route.

Across the length of the park — from the 2700 block to 33rd Place — the lanes will be 10 feet wide in each direction, with medians ranging from 16 feet to 21 feet wide.

Zachary said the actual roadway allows for two 12-foot-wide lanes curb to curb to facilitate buses and service vehicles but that the lanes are being striped to be 10 feet wide to help encourage lower speeds.

Jeff Stava, executive director and trustee of Tulsa’s Gathering Place LLC, said motorists will be impressed with the new roadway.

“The drive down Riverside Drive will be completely transformed from what Tulsans saw before,” Stava said. “The road, if you remember, was narrow and a kind of an older, concrete structure with fairly shallow curbs and a view of the Blair Mansion and lawn and into the river.

“Now the roadway has been transformed into a true parkway with a 16-foot, tree-lined center median and expansive, tree- and plant-filled berms on each side.”

The long-awaited opening of Gathering Place park is set for Sept. 8. Two days later, at 6 a.m. Monday, Sept. 10, the stretch of Riverside Drive from 24th to 35th streets will reopen.

The city closed Riverside Drive from 21st to 41st streets in June 2015 for major reconstruction, but sections of the improved road north and south of the park have been open for local traffic.

The city has spent approximately $65 million on infrastructure in and around the park, including $15.9 million to reconstruct and upgrade Riverside Drive.

Gathering Place officials have a 100-day celebration of the park's opening, beginning with a performance by The Roots on Sept. 8. Hot 8 Brass Band will also perform that day.

Other performers scheduled to be part of the 100-day celebration include Lisa Loeb, Kirk Franklin and A Tribe Called Red.

A full lineup of activities and performances can be found at gatheringplace.org.

As pedestrian bridge comes down, new Zink Dam goes up

The city continues to work on a $48 million overhaul of the dam, which is expected to be completed in the summer of 2023.

An aerial photograph shows the Gathering Place and Arkansas River with the Tulsa skyline in the distance on Friday. TOM GILBERT/Tulsa World

A worker prepares to stripe a section of Riverside Drive that has been closed through the Gathering Place on Monday. The striping will continue most of the month. MORGAN HORNSBY/Tulsa World