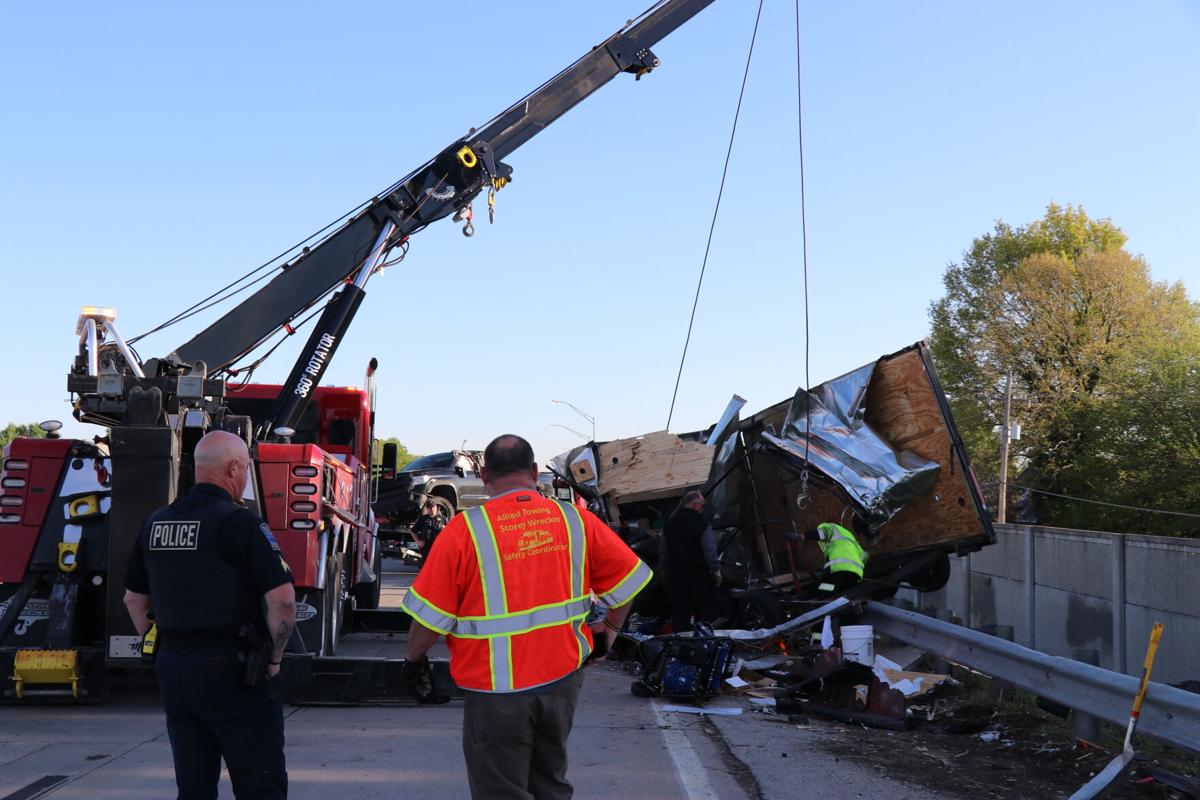 Tulsa Police Sgt. Brian Collum and an Allied Towing employee monitor as crews prepare to hoist wreckage from a morning collision off the guardrail of U.S. 169 northbound near 31st Street on Wednesday, April 21, 2021. 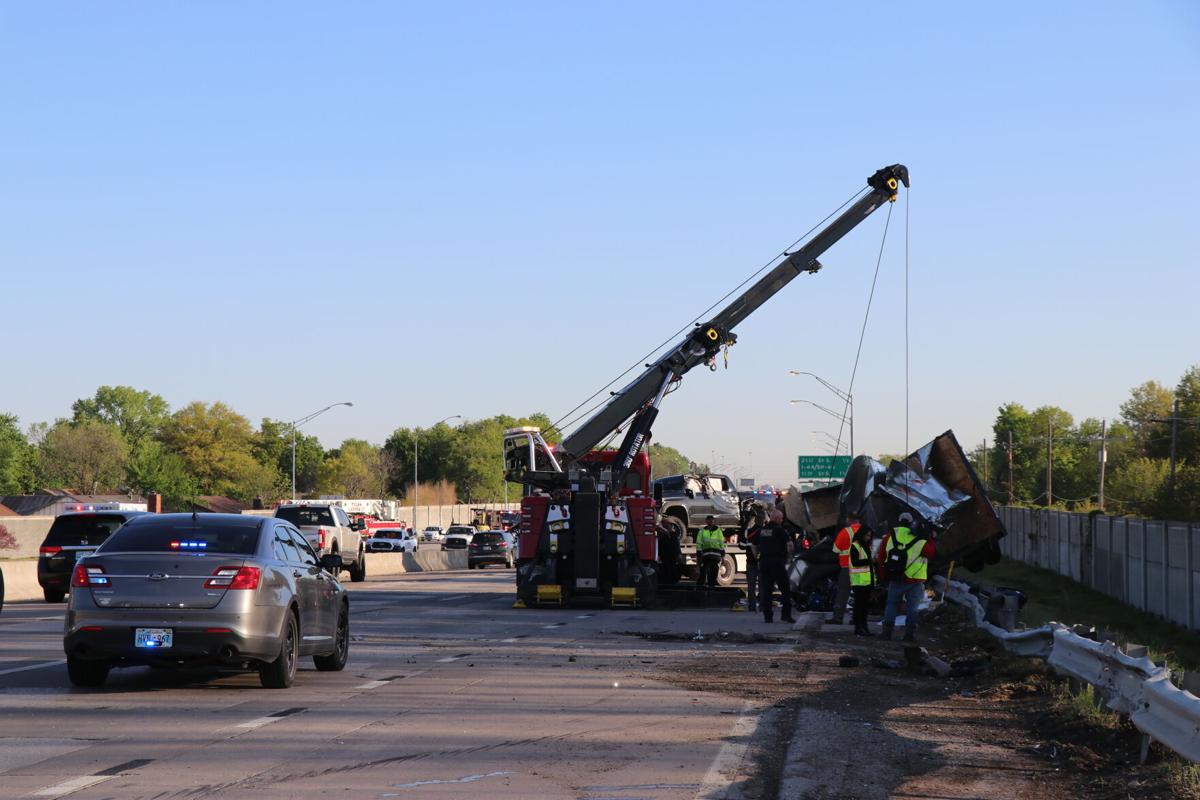 U.S. 169 north at 31st Street was down to two lanes Wednesday morning as Tulsa police, fire and a wrecker service worked through the aftermath of a three-vehicle collision. No one was seriously injured.

The aftermath of a multicar collision along a highway in east Tulsa that sent five to the hospital Wednesday morning became even more complex as passersby found themselves involved in three additional crashes.

The latter were attributed to inattentive driving; something unwelcome but not unexpected as drivers passed by the sizable wreckage of the first crash.

Northbound U.S. 169 at 31st Street was down to two lanes as emergency responders and cleanup crews processed the first scene. The additional crashes were in the southbound lanes of the highway.

Tulsa Police Sgt. Brian Collum said the initial collision occurred about 6:10 a.m., when a gold SUV attempted to merge onto U.S. 169 northbound at 31st Street and cut between a truck with a trailer and a white SUV.

The gold SUV hit the white SUV, which shot across traffic and bounced off the center median before crashing back to the shoulder, Collum said.

The driver of the gold SUV helped the other occupants get out of their overturned vehicles before walking away from the scene, Collum said. Three occupants of the truck, a roofing vehicle, were taken to a hospital with injuries that were not life-threatening.

Officers reportedly found evidence of drug and alcohol use inside the gold SUV, and Collum said investigators know the man’s identity and were in the process of contacting him. He could face complaints of reckless driving and hit-and-run, the latter possibly being a felony because of the injuries, Collum said.

While a massive rotator lifted wreckage from the scene in the northbound lanes, three other crashes happened on the southbound side, most likely due to drivers rubbernecking, Collum said. He said he thought two people were taken to hospitals as a result of those crashes.

Thankfully, the severity of the wreckage was not indicative of the injuries involved, Collum said, which is becoming more regular as newer vehicles designed to crumple on impact in an attempt to spare their occupants hit the roadways.

“We’re starting to see crashes and collisions that really look bad, and no one’s injured,” Collum said. “We’re always pretty happy with that.

“Vehicles can be replaced; your loved ones cannot.”

Collum encouraged drivers to always be alert but especially on such a roadway during morning and afternoon traffic.

The merging lanes along the highway are sizable, he said, and drivers should take advantage of the distance to pick up speed.

“When you come up on the highway, your speed should match the speed of the traffic,” he said. “That way, merging is quite a bit easier. But if you come up here too fast, like this gentleman did, and try to merge too fast, this is what happens.”

Of course, possible intoxication could be a big factor in this particular crash, Collum said.

Drivers in the outer lane should also move over for mergers when they are able.

Tulsa Police Sgt. Brian Collum and an Allied Towing employee monitor as crews prepare to hoist wreckage from a morning collision off the guardrail of U.S. 169 northbound near 31st Street on Wednesday, April 21, 2021.

U.S. 169 north at 31st Street was down to two lanes Wednesday morning as Tulsa police, fire and a wrecker service worked through the aftermath of a three-vehicle collision. No one was seriously injured.