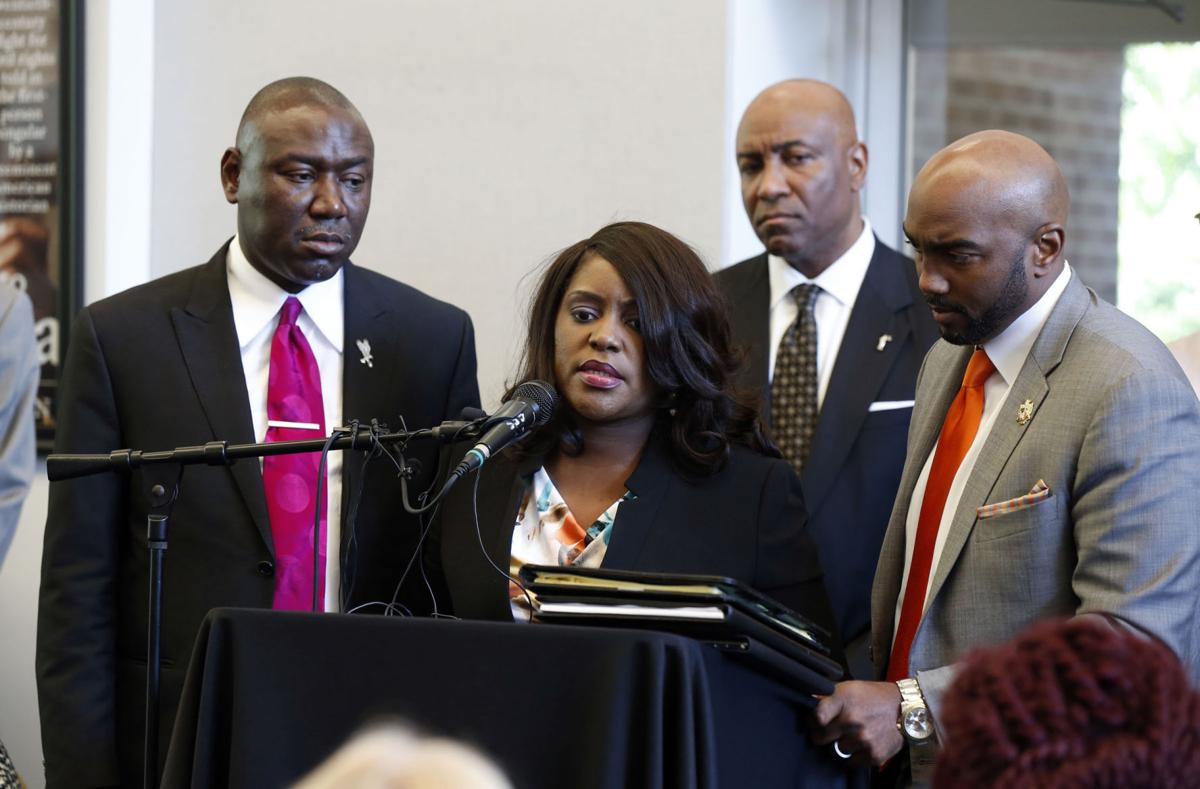 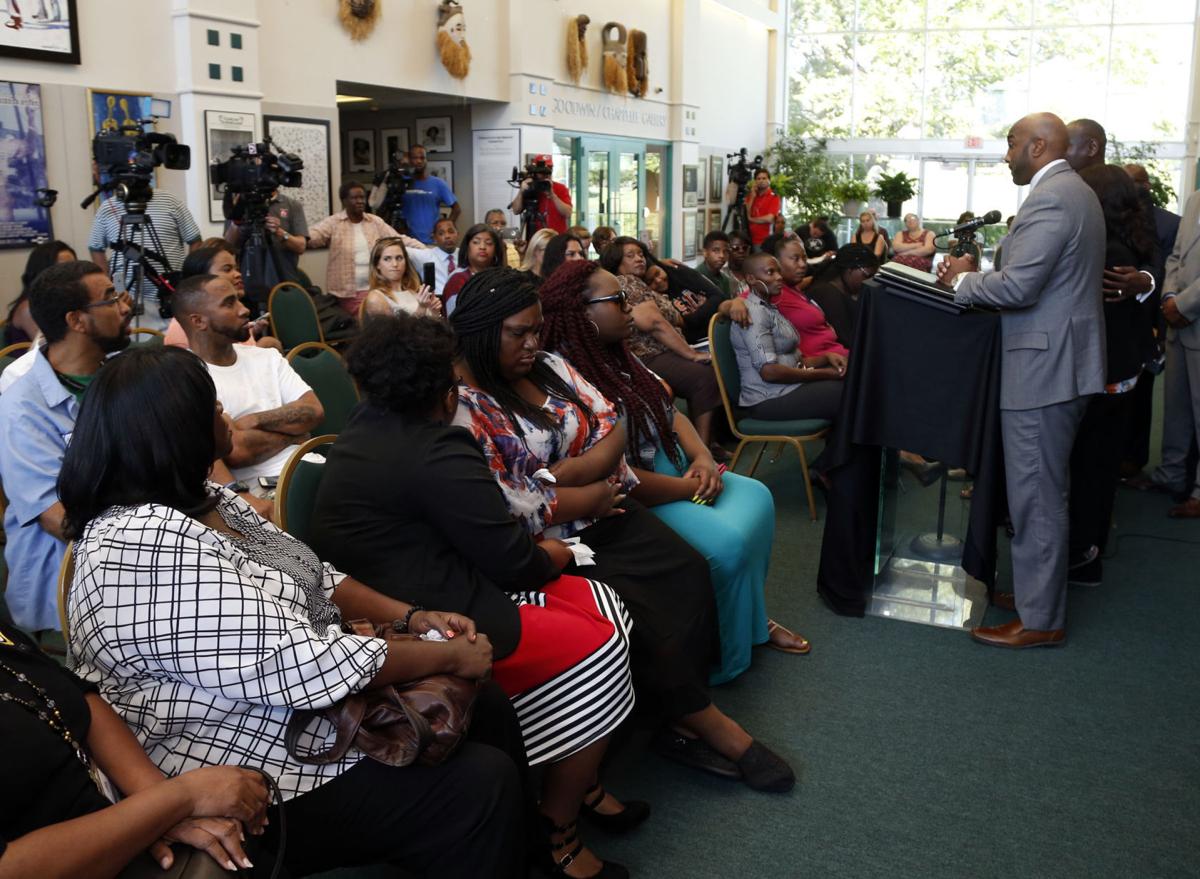 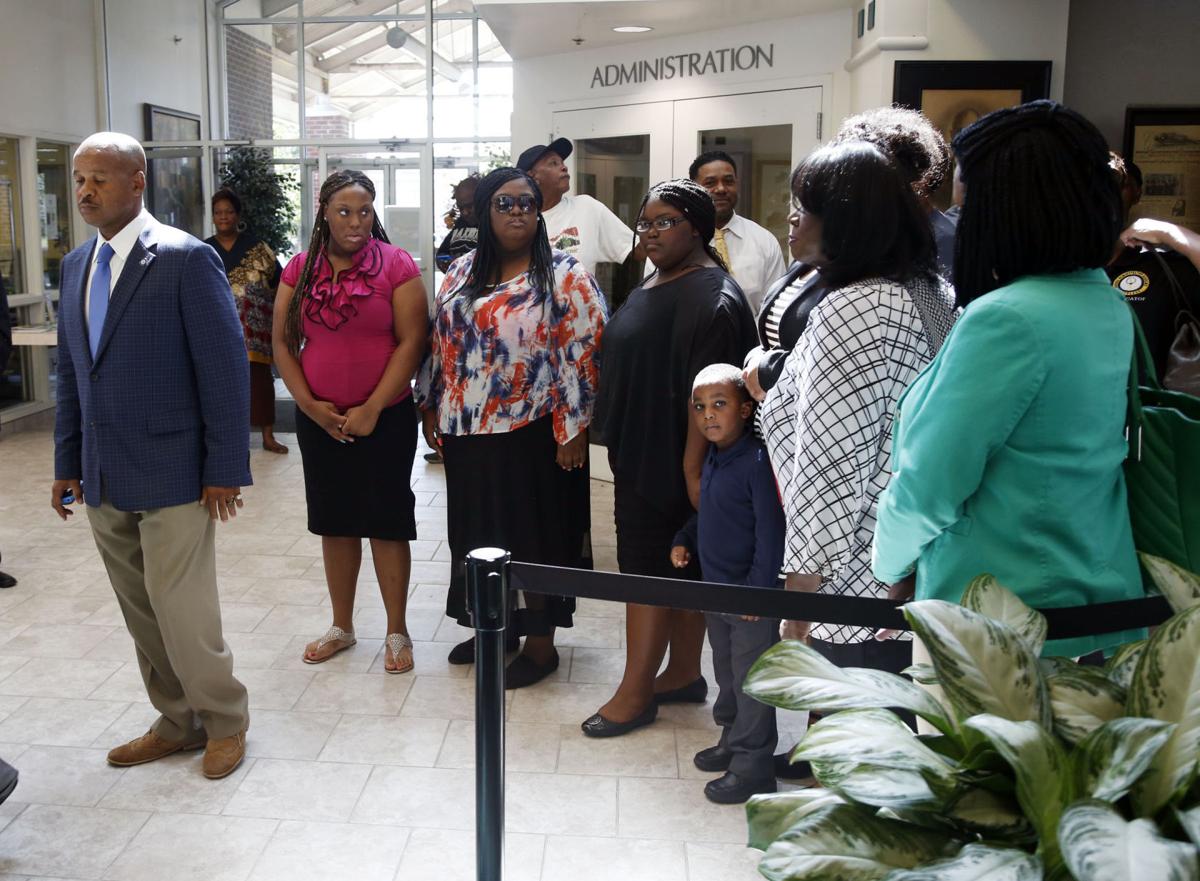 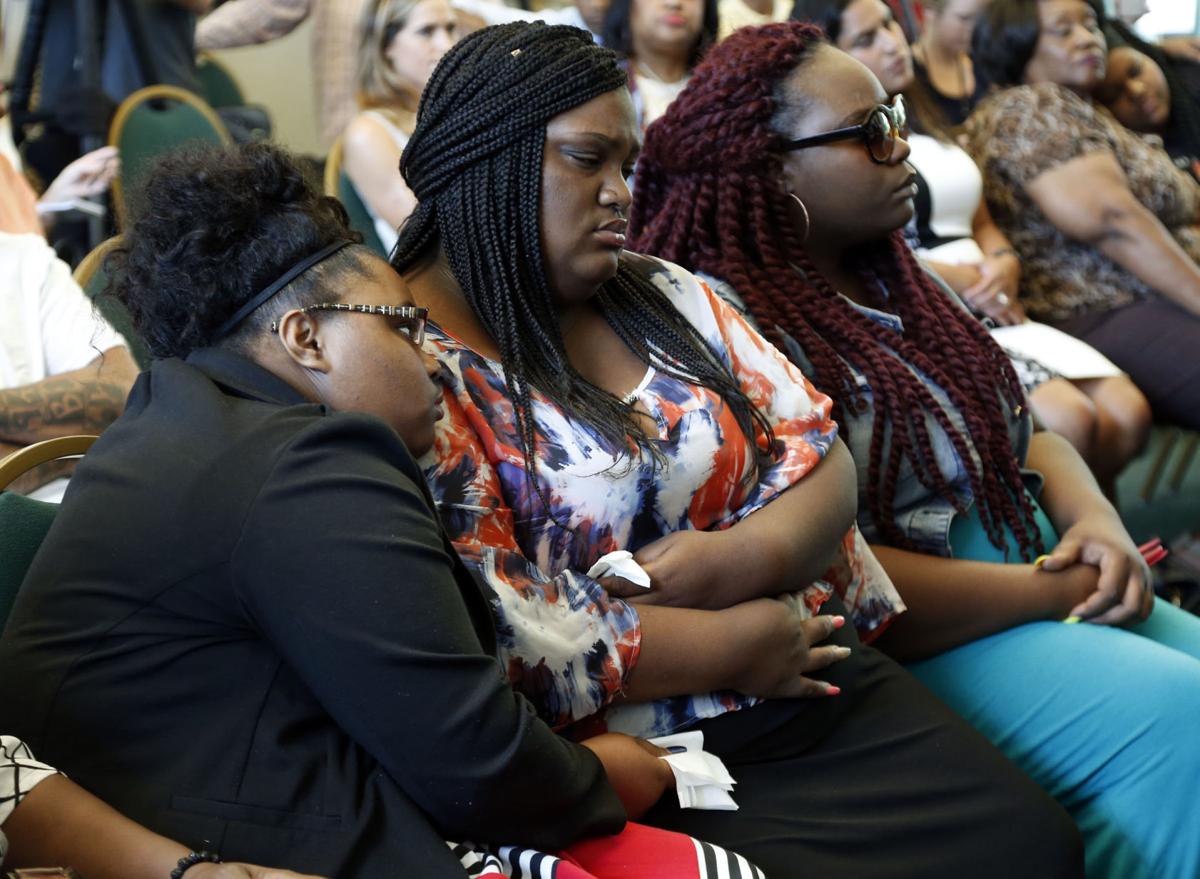 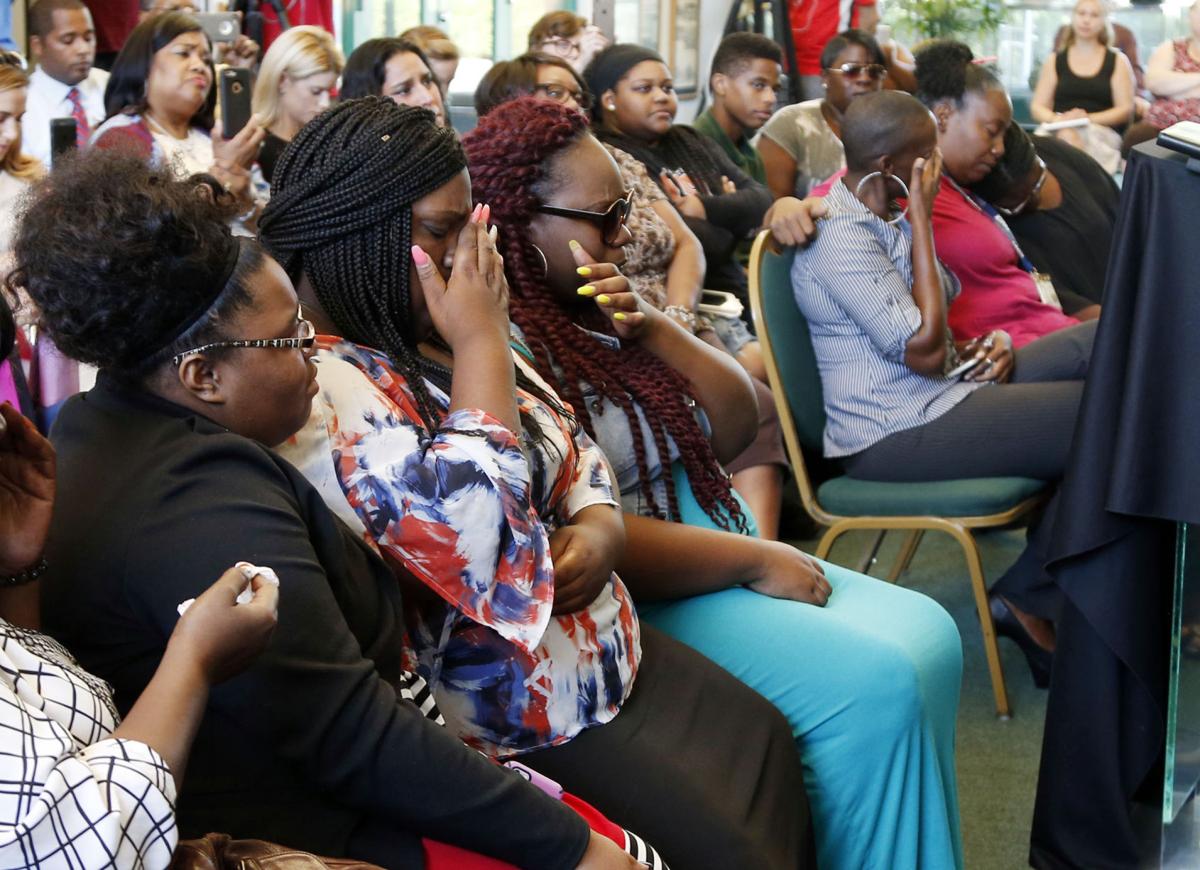 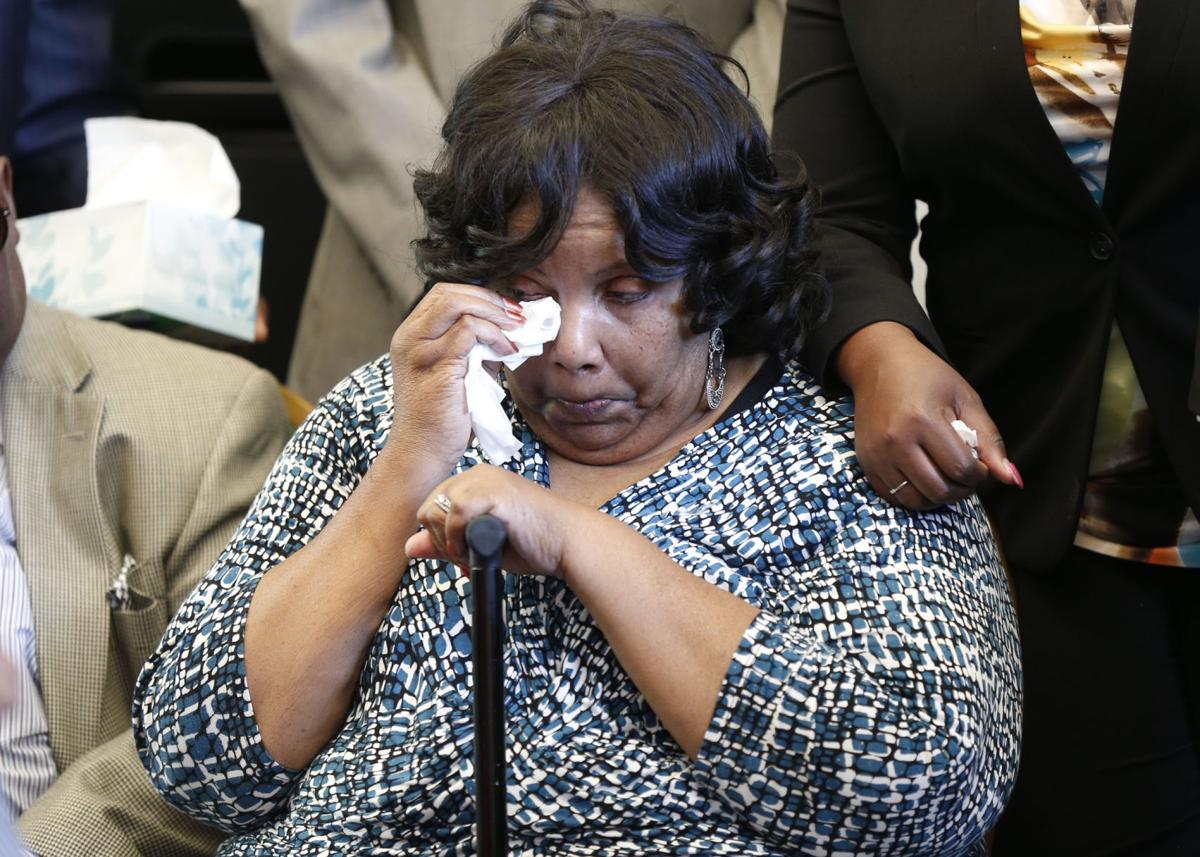 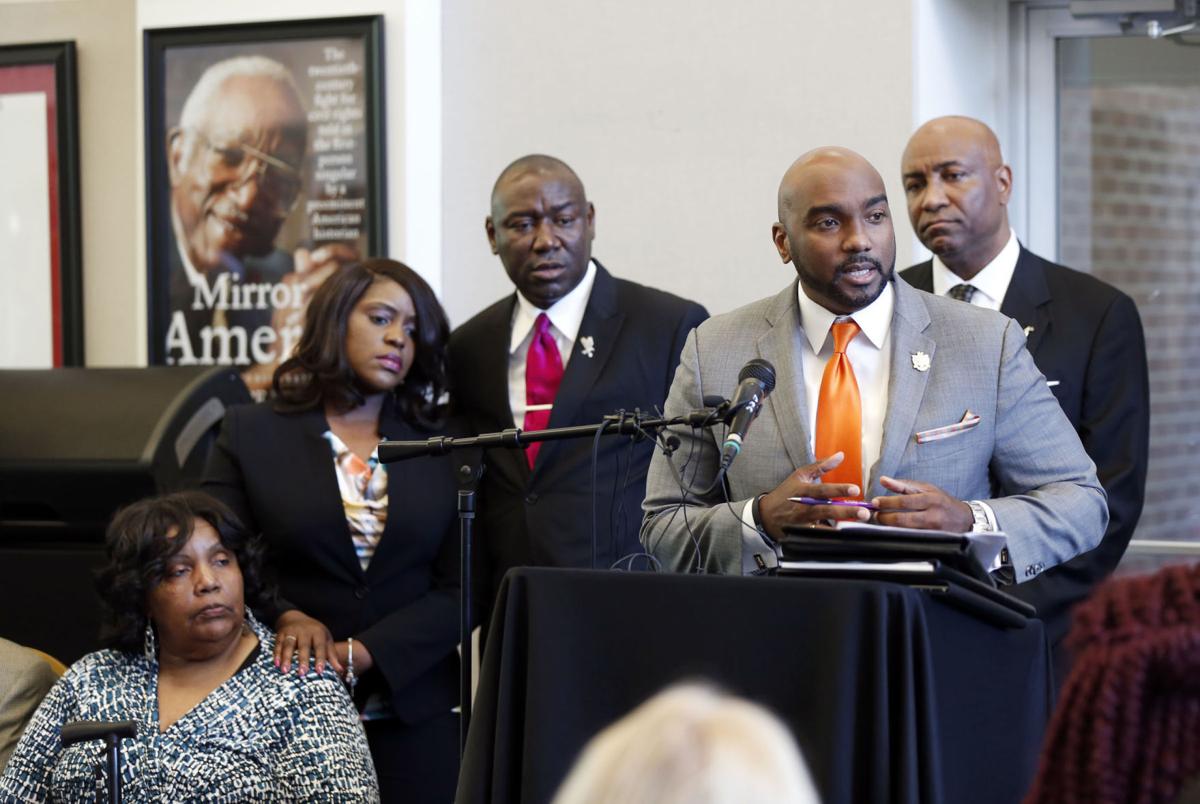 Related story: Tulsa police chief on fatal shooting of Terence Crutcher: ‘There was no gun’

A day after reviewing police videos of the shooting of unarmed Terence Crutcher, his twin sister said Monday that her family is demanding immediate charges against the Tulsa police officer who fired the fatal gunshot.

And she asked that public reaction to the videos’ release remain peaceful.

Referencing an audio recording in which an officer in a helicopter flying over the scene says the man looks like a “bad dude,” Tiffany Crutcher told reporters their family wants justice because “that big ‘bad dude’ — his life mattered.”

Tiffany Crutcher broke down and cried as those words elicited applause from approximately 60 people who attended the news conference in the lobby of the Greenwood Cultural Center, 322 N. Greenwood Avenue.

About three dozen Crutcher family members were present at the news conference, which also included statements from four attorneys representing the family.

Terence Crutcher, 40, was shot Friday evening after an officer responding to an unrelated call came across his vehicle stalled on 36th Street North just west of Lewis Avenue.

Before Monday, police had released few details of what happened. A spokeswoman initially said Terence Crutcher appeared from the side of the road when officers approached his vehicle.

Shelby was placed on paid administrative leave in accordance with Tulsa Police Department policy after any fatal police shooting.

Video recordings of the shooting were released to the media Monday afternoon, a day after they were shown to the Crutcher family and a group of north Tulsa pastors and community leaders.

Tiffany Crutcher asked for any protests that result from viewing the video, which she called “quite disturbing,” to be carried out peacefully.

“Just know that our voices will be heard,” she said. “The video will speak for itself. Let’s protest. Let’s do what we have to do, but let’s just make sure that we do it peacefully, to respect the culture of (the Crutcher family).”

Attorneys for the family called the officer’s use of deadly force unjustified and senseless, noting that the videos indicate Terence Crutcher’s hands were raised and that he didn’t appear to have a weapon, make any sudden movements or attack officers in any way.

Attorney Damario Solomon-Simmons said the legal team plans to send a letter to U.S. Attorney General Loretta Lynch to ensure “a thorough investigation of this particular incident here in Tulsa.”

“This video is extremely disturbing,” said Solomon-Simmons, a longtime family friend. “We could not sleep last night, and without a doubt we believe this was an unjustified shooting that should not have happened.”

Solomon-Simmons said it was initially reported that Crutcher died at a hospital, but he said he believes he actually died at the scene.

“When Terence was shot, he laid on the ground bleeding out without any assistance,” Solomon-Simmons said. “Terence died on that street by himself in his own blood, without any help.”

The family is asking to be allowed to see Crutcher’s body, to which they hadn’t yet been granted access, Solomon-Simmons said.

Attorneys Melvin Hall, David Riggs and Benjamin Crump are also representing the Crutcher family and spoke at the news conference.

“This presented itself, to our thinking as lawyers, as a case involving someone in distress, someone needing help from either a mental or a medical condition — perhaps intoxicated, but in a condition needing assistance of the police,” Riggs said. “But the police seemed to have approached it as someone who was a threat to the community.”

Riggs said it appears police approached Crutcher as someone they needed to take action against, even though the video recordings do not show him exhibiting aggression physically or verbally.

Hall said the circumstances of the shooting do not appear to be justified by any of the exceptions to the Fourth Amendment, which has been used to limit and restrict the circumstances under which deadly force can be used.

Those exceptions can include certain types of emergencies and when officers or the public are at risk of harm, Hall said.

In this case, Hall said, Terence Crutcher was not a criminal suspect when he was approached; it was not an emergency; he needed help with his car; and he does not appear to present a threat to the officers or to the public.

“So there’s absolutely no justification … which would authorize the use of lethal force,” Hall said.

When asked whether the family and attorneys have been satisfied with the police response since the shooting, Solomon-Simmons said they have been “pleasantly surprised” by their willingness to release the recordings and other information.

“But the real test, as has been stated, is what happens now,” Solomon-Simmons said, referring to whether criminal charges result from the investigation.

Crump, a civil rights attorney who also represented the family of slain Florida teenager Trayvon Martin, called for people who view the video to use their inevitable feeling of conflict “in a constructive manner.”

“Remember that even though there are a lot of similarities to Ferguson (Missouri, the site of another high-profile fatal police shooting) in this case, we want to make sure that we have learned that we can express our frustrations in a peaceful manner,” Crump said.

He also called for the public not to demonize Terence Crutcher, who apparently needed help with his car and instead got “a bullet in his lungs.”

“Because of this presumption of big, black dude, (Tiffany) lost her twin brother,” Crump said.

“You all want to know who that big, ‘bad dude’ was?” Tiffany Crutcher asked.

Tiffany Crutcher and her twin brother had just celebrated their 40th birthday on Aug. 16, and she referenced a text message in which he had told her: “I’m going to show you. I’m going to make you all proud.”

Terence Crutcher shooting: What we know so far (updated)