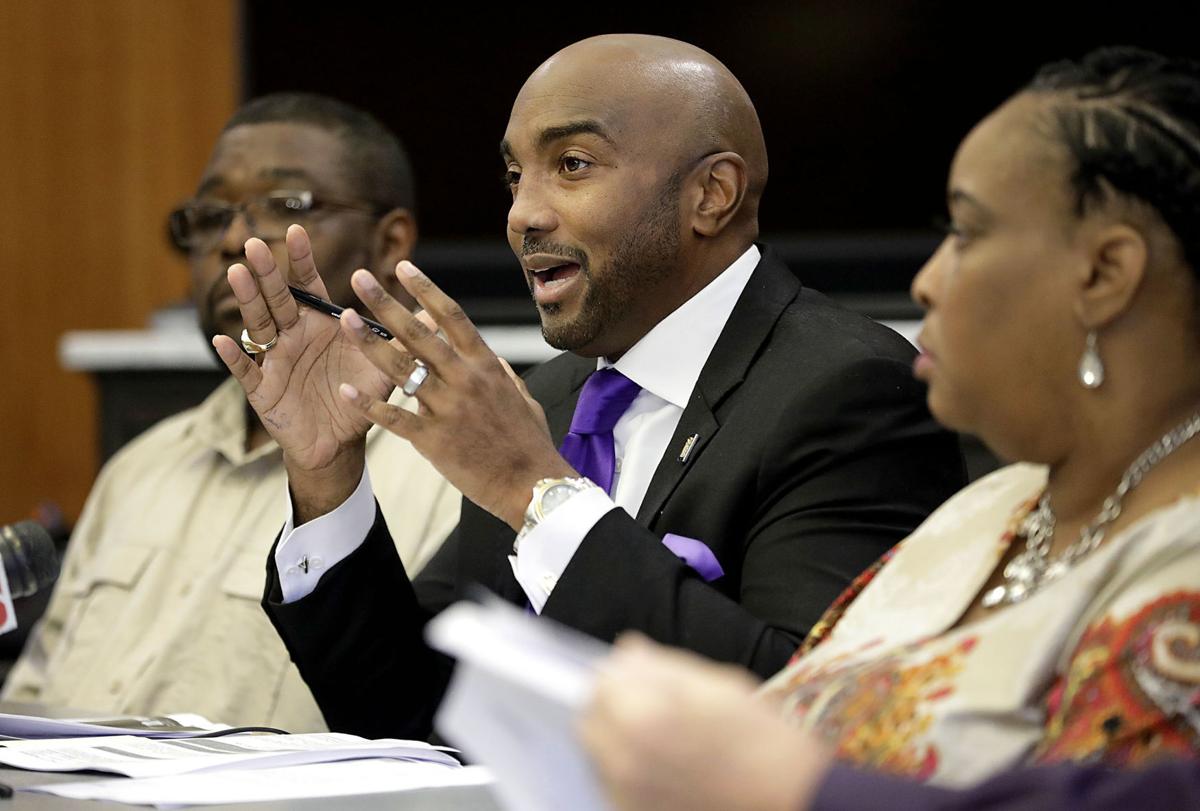 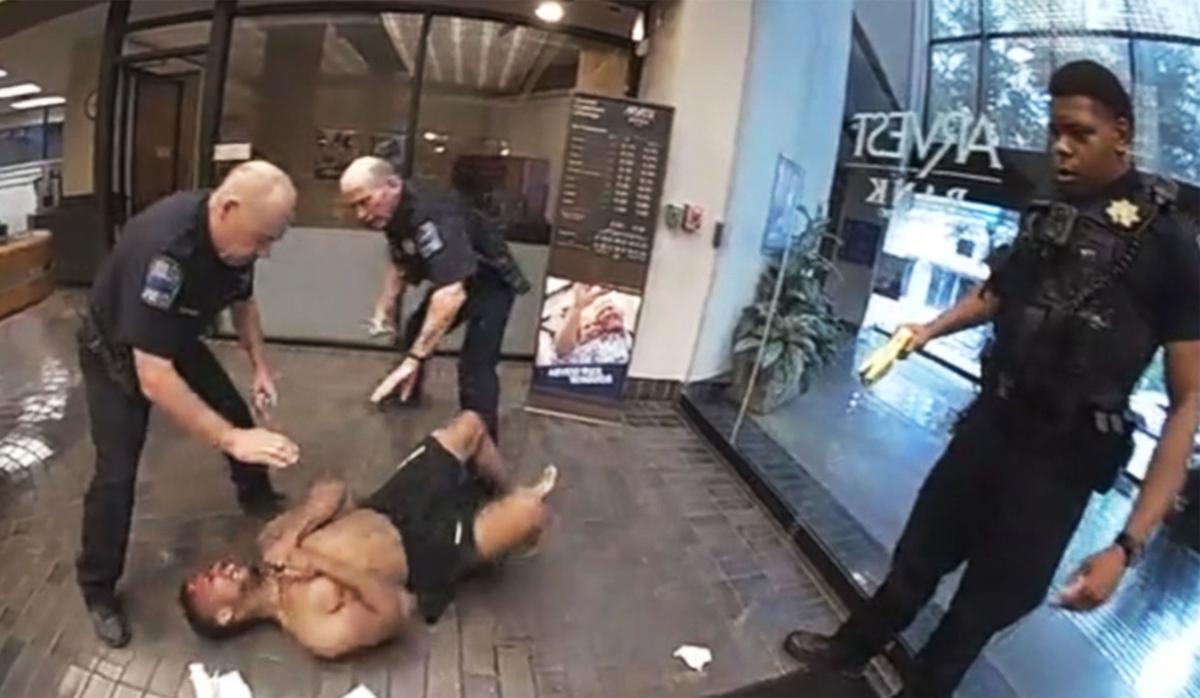 A screen shot of a video released by Tulsa police on Sept. 1 shows officers and Joshua Harvey in a downtown bank lobby. Courtesy 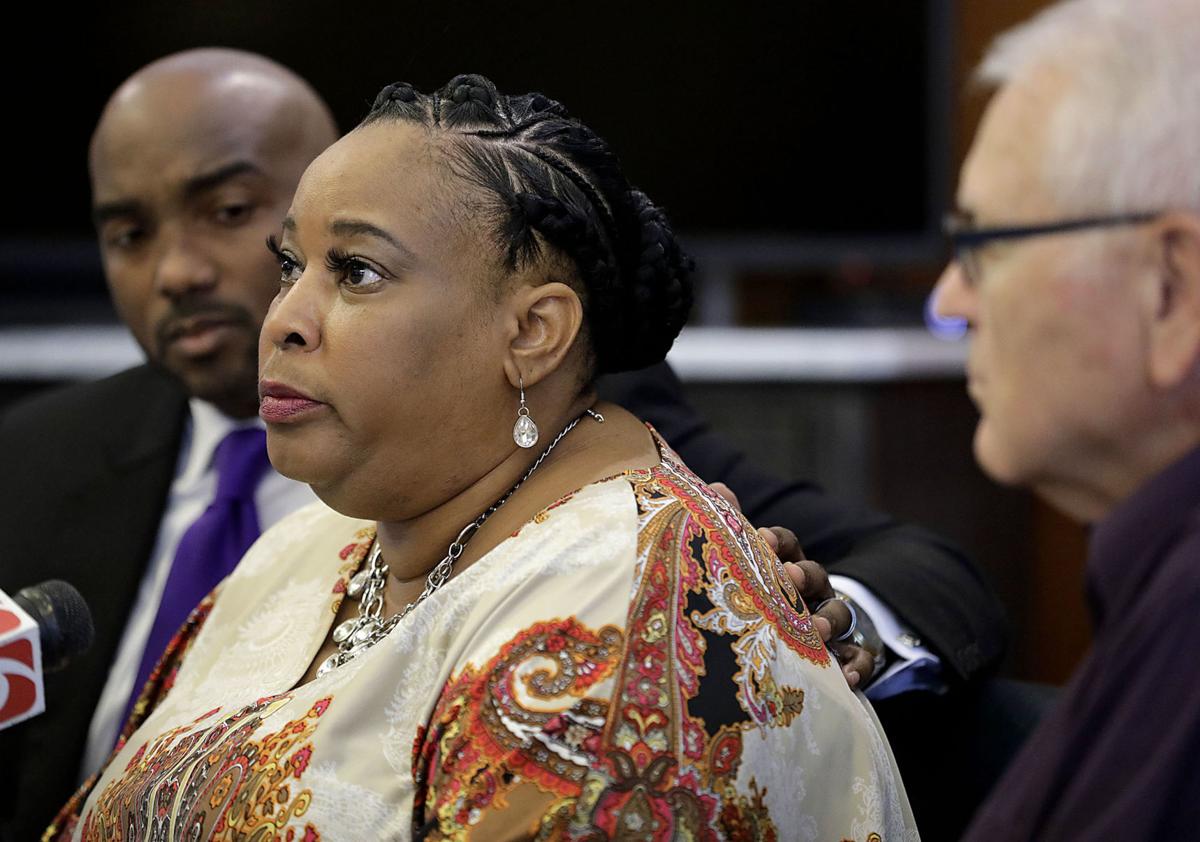 Joshua Harvey's mother Roma Presley(center) speaks as attorneys Damario Solomon Simmons(left) and David Riggs listen during a news conference asking for Tulsa Police Officers to be charged in the death of Josua Harvey Oct. 4, 2018. Harvey was repetedly tased while being aprehended by Tulsa Police and later died. MIKE SIMONS/Tulsa World 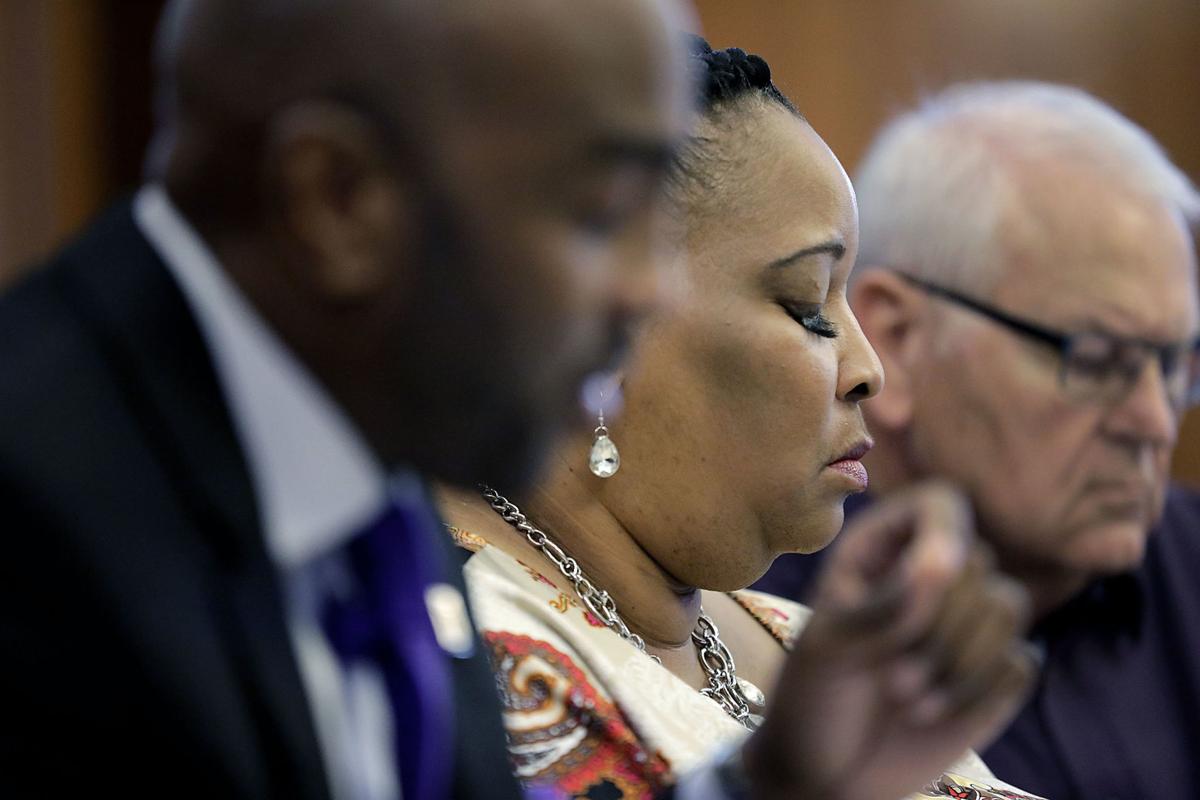 A screen shot of a video released by Tulsa police on Sept. 1 shows officers and Joshua Harvey in a downtown bank lobby. Courtesy

Joshua Harvey's mother Roma Presley(center) speaks as attorneys Damario Solomon Simmons(left) and David Riggs listen during a news conference asking for Tulsa Police Officers to be charged in the death of Josua Harvey Oct. 4, 2018. Harvey was repetedly tased while being aprehended by Tulsa Police and later died. MIKE SIMONS/Tulsa World

'What are they hiding?': Police appear to violate policy in tasing man who later died, attorney says

Editor's note: This story has been revised from its original version to include a statement from the Tulsa Police Department.

The family of a man who died days after an encounter with Tulsa police officers in August has requested that the Tulsa County District Attorney’s Office investigate the officers’ actions with the intention of pursing criminal charges.

“He (Kunzweiler) is the chief law enforcement officer in Tulsa County,” said Solomon-Simmons, who said he had attempted to contact Kunzweiler on multiple occasions since last month to move forward with an investigation. “He has enough evidence to bring charges against those officers who tased Joshua.”

In response to Solomon-Simmons’ request, Kunzweiler told the Tulsa World that he is aware of the incident and has corresponded with police officials but will not pursue an investigation until the department has finalized its own review, which likely will conclude after the state Medical Examiner’s Office’s report is released.

“He knows how the process works,” said Kunzweiler, who explained that his office routinely does not pursue criminal charges until after law enforcement entities make a recommendation.

“My sympathies go out to Mr. Harvey’s family, but this is under the investigative process. I am not going to allow private counsel to influence that.”

Harvey, 25, was confronted by police officers on Aug. 24 at the Arvest Bank at 502 S. Main St. Officers’ body-cam footage later released by the Police Department showed Harvey breaking a glass door and entering the building minutes after first engaging with officers in the 100 block of East Sixth Street.

The video then shows the officers use multiple rounds of electricity from stun guns on him. He eventually lost consciousness and was taken to a hospital, where he died without having regained consciousness three days later.

A use-of-force report released by the Police Department on Sept. 19 says two officers collectively triggered their Tasers at Harvey 27 times during a three-minute period.

One of the officers stated in his use-of-force report that a probe from the other officer’s Taser did not appear to work properly, “so I immediately deployed my Taser.”

The report indicates that one officer — who was in his third week in the field — deployed the short electrical bursts from his stun gun 16 times. The other officer, a 19-year veteran, activated his device 11 times.

Harvey lost consciousness after officers placed him in handcuffs.

“This is excessive (force) on its face,” said Solomon-Simmons. “In addition to being tased 27 times, he was tased simultaneously, which is against TPD policy.”

Each additional Taser application must be evaluated in the same manner as the first application, according to the policy. The guidelines note that additional applications may be appropriate if additional officers aren’t present and approaching the individual “may cause a greater threat” to the officer or citizens.

The use-of-force report states that once Harvey was in handcuffs, officers could see that a probe from one stun gun did not have a lead wire attached.

Solomon-Simmons also claimed that officers also did not follow protocol when they exposed Harvey to cumulative stun gun applications that exceeded 15 seconds in length, which can lead to injury or death, according to TPD use-of-force instructions.

Solomon-Simmons said Harvey was shocked for a total of 64 seconds.

“Joshua was never given the opportunity to do anything because he was tased so many times,” he said.

An officer stated in the use of force report that he was “convinced that if the Taser had not been deployed, the incident would not have been resolved in the short time that it was resolved.”

The Tulsa World is not identifying the officers who deployed their stun guns because they have not been officially accused of misconduct. Both officers remain on duty.

In a news release, the Tulsa Police Department reiterated that it has already publicly released body camera footage, 911 calls and the use-of-force report in addition to other documents related to the incident.

"These documents were released to the media and Mr. Damario Solomon-Simmons," the release said. "We will continue to wait for the medical examiner's report before determining if additional investigation is warranted or making further comment."

Harvey’s mother, Roma Snowball-Presley, said the family has been “totally ignored” in the pursuit of answers about her son’s death.

“I feel we are way overdue for justice,” she said. “Please get justice and figure out what the situation is, which I’m sure Mr. Kunzweiler knows what it is, and fight for justice for my son.”