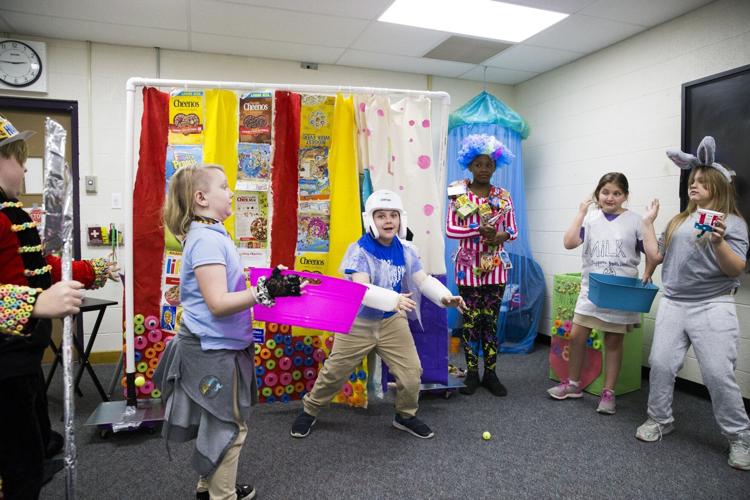 Students from Zarrow International School rehearse their Odyssey of the Mind entry, an interdisciplinary, problem-solving competition. The school recently won a state title and earned a spot in the world finals. 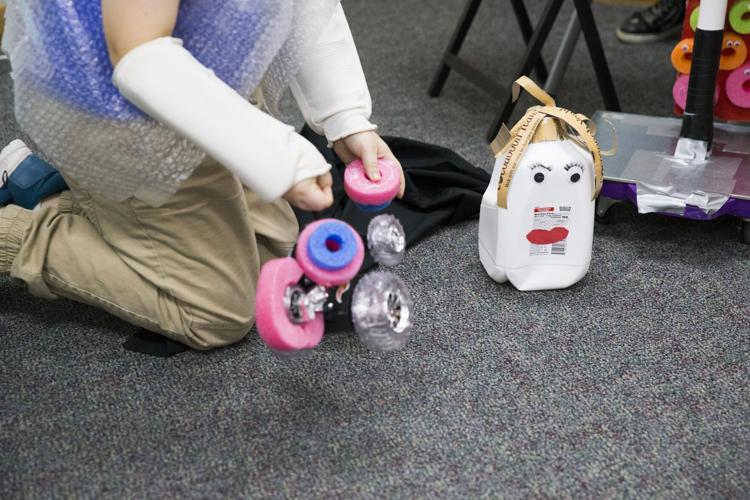 A student from Zarrow International School works with props during a rehearsal of the Odyssey of the Mind entry. 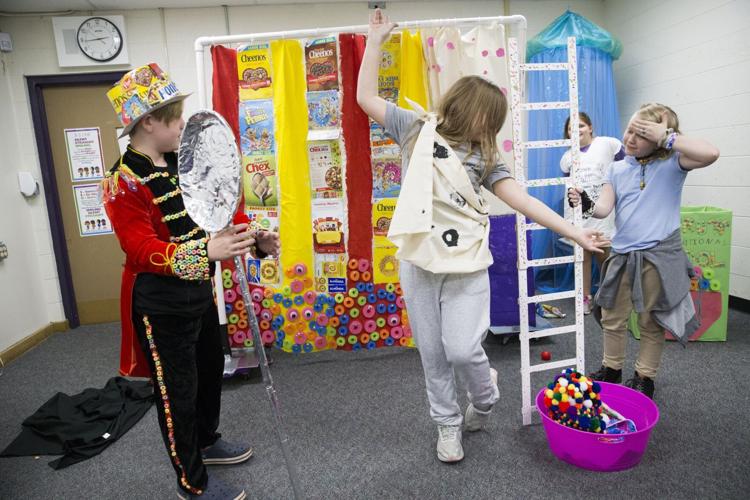 Boxes of cereal are putting a group of fourth- and fifth-grade students on an international stage later this spring.

In its first year of existence, the Odyssey of the Mind team from Zarrow International School recently won a state title and earned a spot in the world finals, scheduled for May 25-29 at Iowa State University in Ames.

Launched more than 40 years ago, Odyssey of the Mind is an interdisciplinary, problem-solving competition. Teams of students choose one of five performance prompts to address and work together to develop a creative solution to present before a panel of judges.

For example, the prompt chosen by the Zarrow team, “Life is a Circus!” required the students to come up with a skit that involves a student waking up one morning to discover they were in a circus world, complete with animals, a clown and a ringmaster.

Other performance prompt options this year include a biographical musical, an escape room with at least one custom-made vehicle, and building and incorporating a matryoshka, or Russian nesting doll, made of balsa wood and glue.

Beyond that basic framework, teams can take the prompt in any direction. For the Zarrow team, that meant bringing the circus to the breakfast table and creating a cereal-themed skit. Along with trimming ringmaster pants with Froot Loops, Zarrow’s skit includes a giant spoon, an appearance from Trix the Rabbit and a talking milk carton.

“We chose cereal because it’s something that nobody talks about,” fourth-grader Angel Oakley said. “And it’s fun to just make stuff with food and … eat the food.”

In addition to the prepared solution, the teams must also tackle a spontaneous challenge at the state meet. For example, the group could be given a word puzzle to pick apart or a stack of materials and told to build a weight-bearing bridge.

However, the students are not allowed to say what it was just yet.

“We don’t even know what it was,” special education teacher and team adviser Lisa Rutledge said. “They’re not allowed to talk about it until after the world finals.”

Now in her third year at Zarrow, Rutledge has been involved with Odyssey of the Mind for more than 20 years. However, this was the first year she was in a position to sponsor a team at the immersion school, thanks in large part to COVID-19.

“The thing I love about Odyssey is that it’s like a little think tank for children,” she said. “They learn how to work together, think creatively outside of the box and put it all together.”

"Education has changed," said Doug Price, Berryhill Middle School principal. "You're not just a teacher anymore — you have to wear so many different hats, and this is part of it."

The school board unanimously voted late Monday to renew the contracts of both Superintendent Kirt Hartzler and Chief Financial Officer Trish Williams. #oklaed

A 'catastrophe' if Ukrainian power plant attacked, according to President Zelensky

A 'catastrophe' if Ukrainian power plant attacked, according to President Zelensky

Students from Zarrow International School rehearse their Odyssey of the Mind entry, an interdisciplinary, problem-solving competition. The school recently won a state title and earned a spot in the world finals.

A student from Zarrow International School works with props during a rehearsal of the Odyssey of the Mind entry.