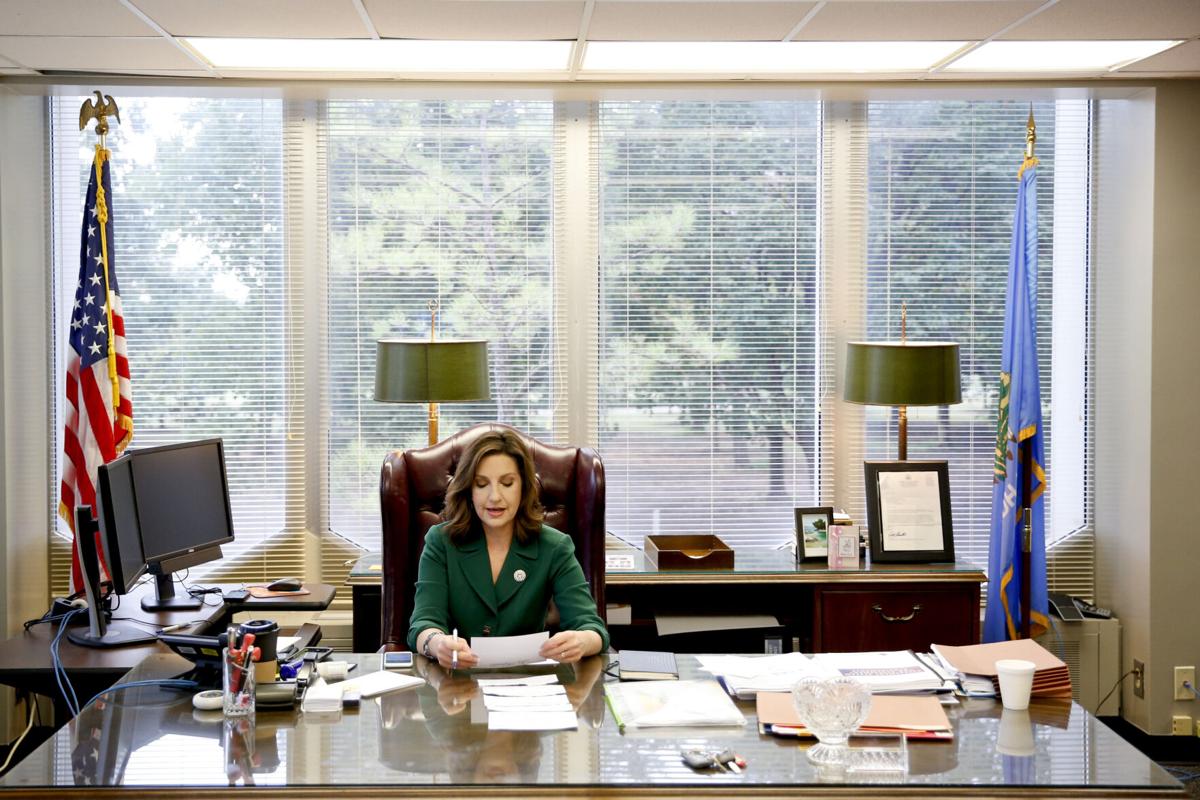 Oklahoma’s State Auditor & Inspector, Cindy Byrd, speaks during a press conference where she released the first part of an investigative audit of Epic Charter Schools at the Oklahoma History Center in Oklahoma City on Thursday.

State Superintendent Joy Hofmeister is vowing to take new actions to “recoup” millions in taxpayer dollars from Epic Charter Schools amid a new forensic audit that paints a damning picture of her administration’s handling of Epic for many years.

The office of State Auditor and Inspector Cindy Byrd found within the Oklahoma State Department of Education an accounting system preoccupied with school district compliance — with little to no verification of the information they report or accountability for falsehoods or other failings.

In an interview with the Tulsa World, Hofmeister pointed to an earlier reporting deadline imposed on schools last year that already resulted in the state Board of Education slapping Epic with a $530,000 penalty.

And the official release of Part I of what is expected to be a two-part forensic audit report from Byrd provides an opportunity for education officials to take more actions.

“We are actively engaged in carrying out our obligation to the taxpayers to recoup the millions of dollars identified,” Hofmeister told the Tulsa World.

Forensic auditors for the state say Epic Charter Schools’ operators “blurred lines” between running schools and making money and have established a complex web of entities lacking internal controls or outside checks and balances on their use of taxpayer dollars.

The report raises questions that are now up to the Oklahoma Attorney General to respond to about the legality of transferring hundreds of thousands in Oklahoma tax dollars to Epic’s California charter school, commingling of funds for Epic’s two separate Oklahoma schools and chronic misreporting of administrative costs.

In all, $125.2 million of the $458 million allocated to Epic Charter Schools for educating students the past six years ended up in the coffers of the co-founders’ for-profit charter school management company.

A district court judge has set a December trial for the auditor’s ongoing quest to obtain public records of the use of the other $79.3 million, which Epic transferred to EYS to manage for student learning expenses.

But the state audit also points a finger at Hofmeister’s state Education Department, finding “ample oversight, but limited accountability,” even when red flags were raised nearly four years ago.

‘A slap on the wrist’

The $530,000 penalty imposed by the state school board in February, while significant, represented a fraction of what the state auditor said she has documented proof that Epic actually owes for the last six fiscal years – $8.9 million.

The report detailed an instance in 2016-17 when the oversight function of the state Department of Education worked as intended. An accounting employee flagged “inaccurately reclassified administrative costs,” totaling $2.9 million and the state’s then-Deputy Superintendent of Finance and Federal Programs Matt Holder and then-General Counsel David Kinney got involved.

After two months of back and forth communications with Epic, the matter was ordered closed, thus avoiding a $2.6 million penalty assessed against Epic for exceeding Oklahoma’s statutory limit on administrative costs.

Such a penalty would have reduced the for-profit EYS management company fees by $265,000.

And between 2015 and 2019, Byrd says one of Epic’s two Oklahoma schools failed to report more than $8.9 million in administrative payroll costs.

Had they been assessed full penalties by the state, EYS would reportedly have collected at least $837,000 less in management fees.

Additionally, state education officials are responsible for ensuring school districts meet accreditation standards every year, but the auditor said “there is virtually no follow-up or on-site review conducted by SDE as it relates to the actual records underlying the data reported.”

Hofmeister called that a “mischaracterization” and said her department moved a reporting deadline for schools to September from December, allowing accounting officials more time to address any issues like the one that resulted in Epic’s half million dollar penalty this February.

For two years in a row, Hofmeister has requested that the Legislature grant her department subpoena power to use when questions arise, in cases just such as Epic’s.

But she just told the Tulsa World that Epic’s numerous lobbyists were successful in blocking the idea from advancing.

A Tulsa Republican authored a new law that took effect last year that attempted to crack down on cost reporting by statewide virtual charter schools by requiring them to submit itemized invoices for their management fees.

“It is disturbing that Epic Charter Schools blatantly disregarded the required procedures in this new law and engaged in questionable financial and ethical practices,” said the law’s author, State Rep. Sheila Dills, in a statement posted to her official Facebook page on Friday. “Taxpayers must be reassured that when laws are passed, the agencies responsible for the oversight of taxpayer dollars will hold entities accountable.”

She also slammed Epic’s contention that the results of the state’s forensic audit were the result of anti-charter school or anti-school choice sentiments.

“Epic parents and others are brainwashed into believing that anyone who questions their business practices is attacking parents and their right to choose what education model is best for their child. This could not be further from the truth,” Dills wrote.

“As a legislator, my number one goal is to address the overarching lack of transparency and accountability in all areas of our government. I chose to work on the area of education because we appropriate over half of our appropriated dollars in this area. Epic calls the State Auditors report ‘political theatrics,’ but I call the auditors report a job very well done.”

Also noteworthy is the fact that Hofmeister previously accepted more than $50,000 in campaign contributions by Epic’s founders and their backers, but she denies that she has in any way turned a blind eye to any possible wrongdoing.

She said it is important for the public to understand her department has been engaged behind the scenes for several years now in assisting with the gathering of Epic-related data and records by investigators from the Oklahoma State Bureau of Investigation, the U.S. Department of Education’s Office of Inspector General and the Federal Bureau of Investigation, as first reported by the Tulsa World.

In her report, Byrd wrote that she thinks Oklahoma should consider prohibiting new charter contracts or renewals of existing contracts for schools operated by for-profit organizations — or subcontracts, like the one Epic Youth Services has held for the two charter schools in Oklahoma.

She said an inherent “clash of cultures” exists between traditional public schools designed to provide the best service possible with public funds available and a charter school management organization designed to extract the maximum profit possible while providing such a service.

“We are committed to addressing the challenges in accountability that are noted in the audit. The findings do point to clear limitations the OSDE has had for decades. This is unacceptable and investments in modernization efforts must be a priority,” Hofmeister said. “Over the past several years, we’ve discovered data reporting weaknesses and have implemented changes to help address some of the systemic problems that surround the Epic model.

“But the underlying fact is that unless and until there is a change through legislation, a for-profit model will continue to pose serious challenges.”

• Charter school authorizers, called sponsors, should ensure they have authority within their contracts school operators to “properly monitor operations and funding and provide rigorous oversight.”

• Charter sponsors should also have final approval of agreements between charter schools and outside charter management organizations the schools may choose to hire and “have substantial input in the financial aspects of the agreements.”

• Charter management organizations should not have control over school district financial decisions.

• Oversight by charter school sponsors and the state Department of Education must extend beyond “checking the box” to be effective. The State Department of Education must allocate proper resources to “fully accomplish their oversight responsibilities.” And an “internal risk assessment” should be conducted to ensure that SDE oversight is “focused on the areas where they will provide the most significant impact.”

• All public funds for charter schools must be maintained in public bank accounts and all associated transactions must remain public.

• The manner in which charter school board members are appointed should be evaluated and a process for establishing truly independent school boards should be implemented.

Most said the need for additional legislation was made clear.

The action was recommended based on information that the operators of the state’s largest virtual school may have failed to meet contract standards for fiscal management, violated various laws and for “good cause.” #oklaed

The Tulsa Public Schools Board of Education on Monday evening will discuss and potentially decide whether middle and high school students will return to the classroom in the near future.

In a virtual meeting, board members voted 6-1 to have secondary students transition to in-person instruction on Jan. 4 for four days a week.  Wednesdays will be spent in distance learning.

An agenda for Tuesday's meeting indicates possible action "including but not limited to proceeding with termination of the charter contract" after recent forensic audit findings on Epic Charter Schools.

This semester, both schools will switch to online lectures and final exams after the Thanksgiving break.

Oklahoma’s State Auditor & Inspector, Cindy Byrd, speaks during a press conference where she released the first part of an investigative audit of Epic Charter Schools at the Oklahoma History Center in Oklahoma City on Thursday.