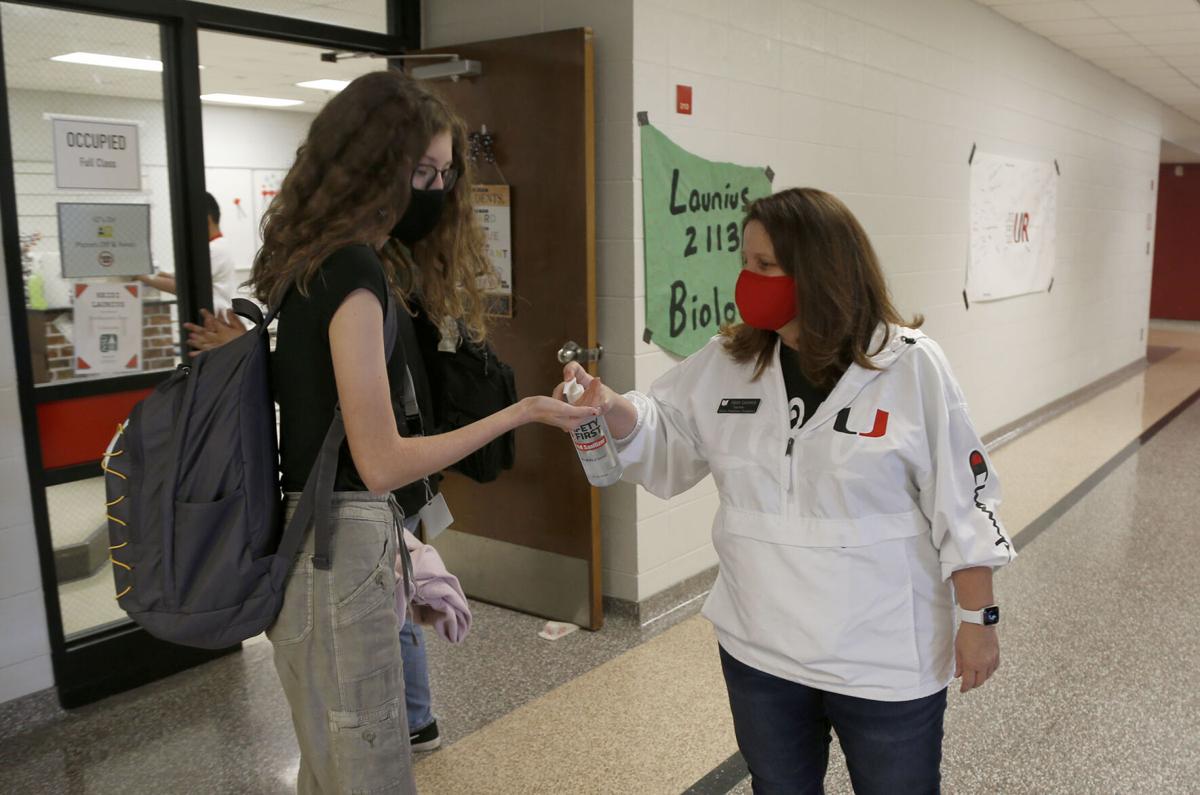 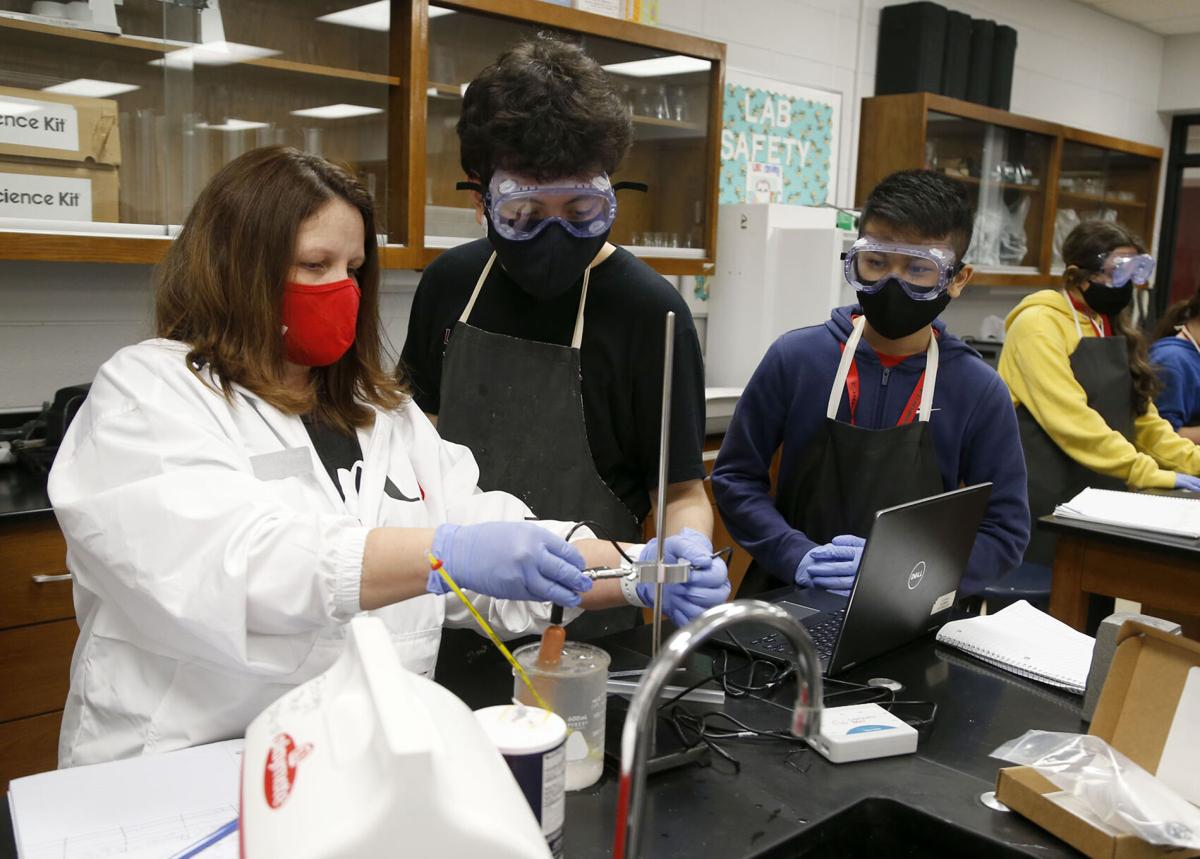 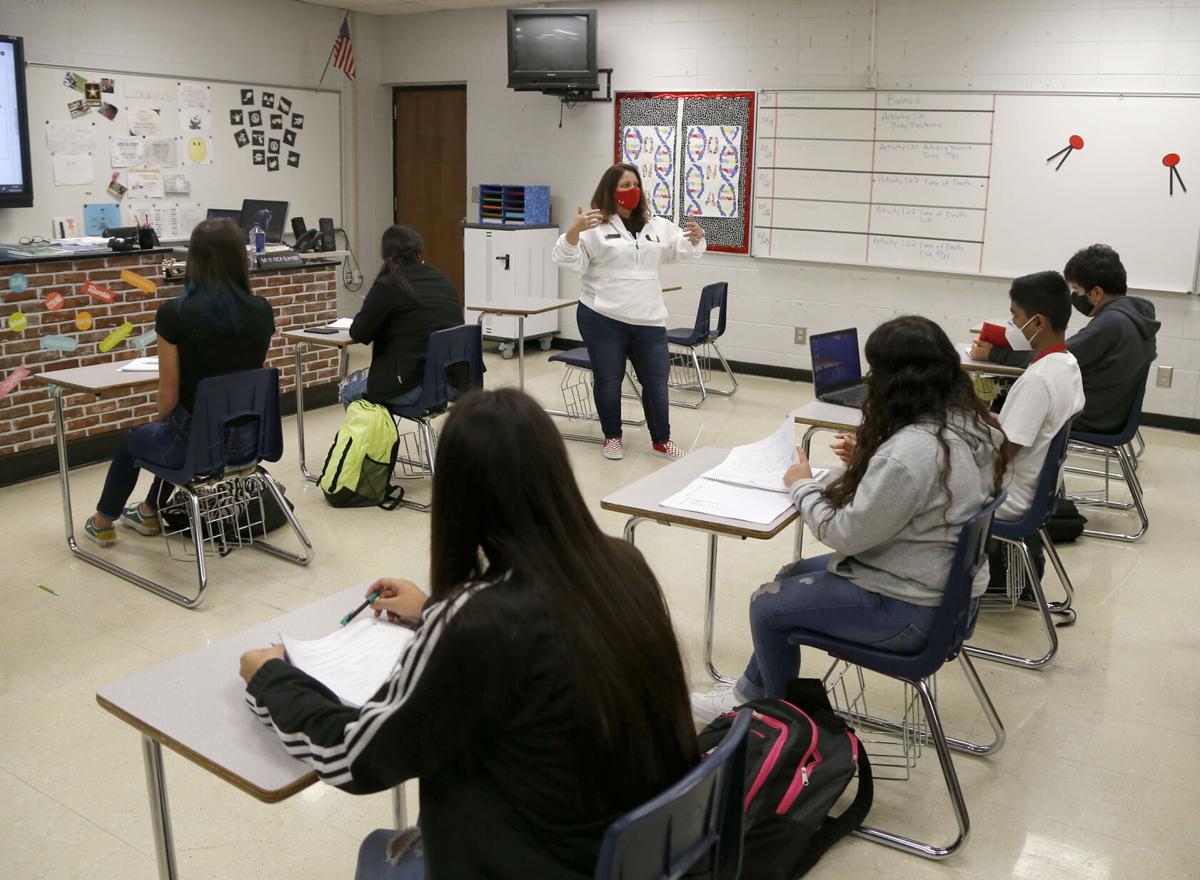 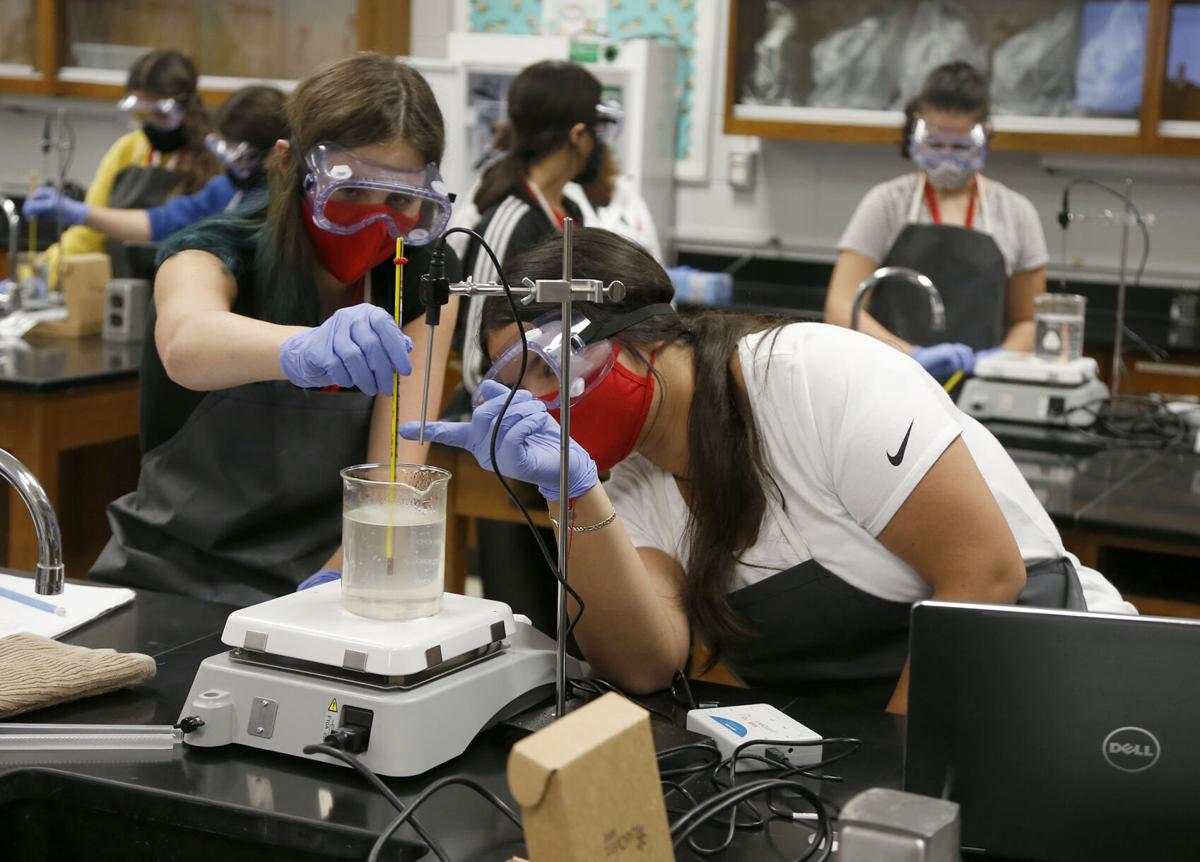 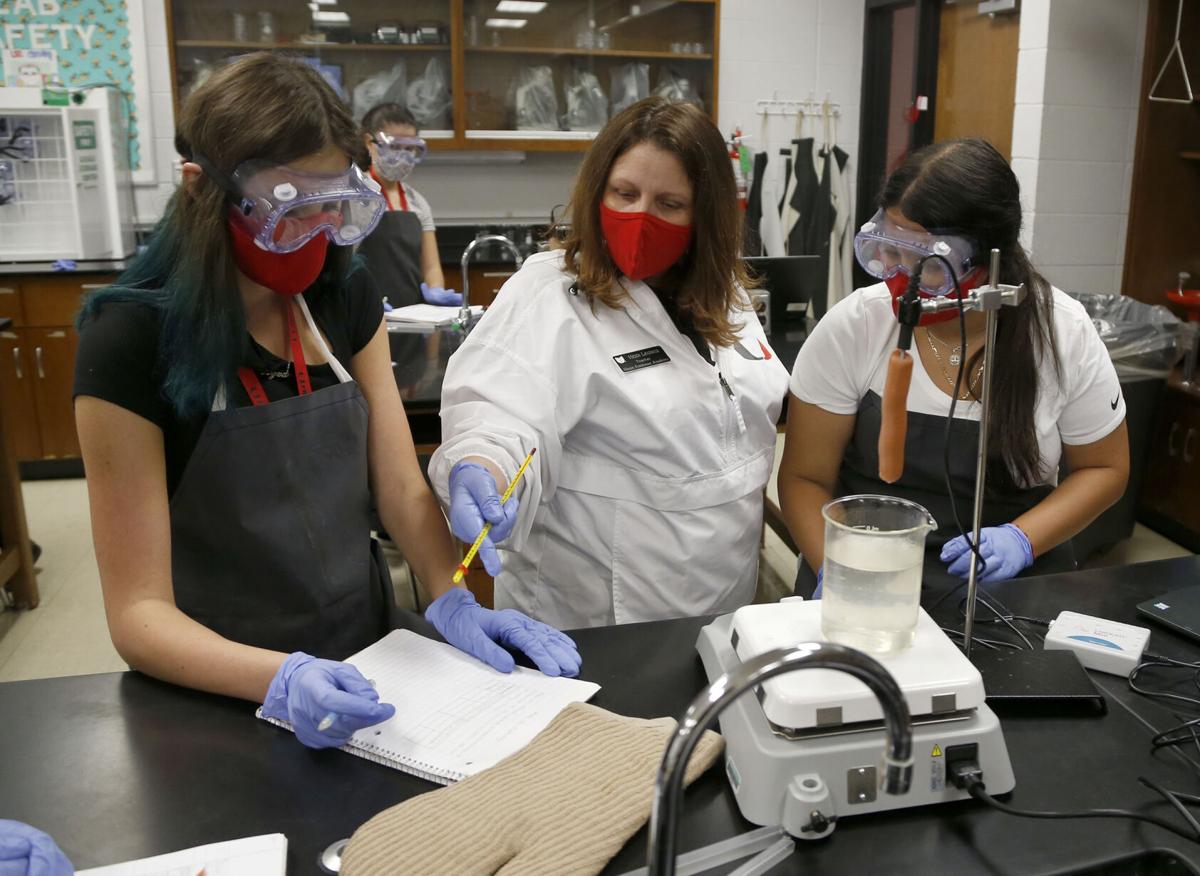 Union Public Schools teacher Heidi Launius felt apprehensive, to say the least, when board members decided the district should begin the school year in person instead of through distance learning.

There was a lot of anxiety and “fear of the unknown,” as Launius called it, on that first day of school at the Union High School Freshman Academy in August. She wondered about how to socially distance her students while still being an effective teacher.

To her relief, the return to school went much better than expected despite the COVID-19 pandemic. It didn’t take long to get used to a new normal — one involving masks and limited separation.

“It was an adjustment, but I feel that the students really came with an open mind and wanted to be in school,” Launius said. “It made the transition into school and in person really smooth and good for all of us.”

Of course, that’s not to say the fall semester of the tumultuous 2020-21 school year hasn’t had its bumps and bruises along the way.

A student in one of Launius’ classes tested positive for COVID-19 early on in the school year, causing nine others to be quarantined. Nearly half of her class was gone for two weeks.

The incident prompted Launius to spread students out using lab tables instead of desks, allowing for more separation. She hasn’t had any students test positive since then, though there have been a few who needed quarantined after coming into contact with an infected person elsewhere.

Launius still can’t decide whether distance learning would have been a better option than in-person for the fall semester, with both sides featuring some pretty significant pros and cons.

The potential of students needing to quarantine and quickly transition to distance learning at any point makes it tough on them and for their teachers, who then must juggle both modes of instruction.

“In that respect, distance learning would have been better,” she said. “But in another respect, it’s so nice to be back in a classroom. My favorite place is in the classroom, so to be here with my students is a great joy for me. It’s just very different this year.”

For Broken Arrow Public Schools teacher Erin Shelby, the thought of returning to the classroom with so many COVID cases in Tulsa County was a bit terrifying at first. She avoided public places like restaurants because she wanted to mitigate the risk of infection.

The anxiety worsened as other districts — Jenks and Owasso — decided to start the school year through distance learning instead of in-person instruction.

“It was hard at the beginning knowing that everybody else was changing their mind and going virtual,” Shelby said. “I was like, ‘Are we seriously going to stay in person?’ But I was so glad we did because I feel like the relationships I can build with our kids when I’m face to face with them is so much easier to obtain versus virtual learning.”

While the first day was nerve-racking and the health-related changes took some getting used to, Shelby said they soon became second nature.

The new routine, at least at her elementary school, now involves much more togetherness than in years past. Students stay with the same kids at lunch, during class and at recess. The goal has been to reduce mingling to help prevent spread as much as possible.

Shelby said she counts herself lucky that nobody in her class has been infected or needed to quarantine so far this year.

“Whenever teachers are having to do distance learning and in person, it’s super strenuous,” she said.

Kathryn Plumlee, a sixth-grade teacher at West Intermediate in Bixby Public Schools, hasn’t been so lucky. She’d been in school for about three weeks before one of her students tested positive, leading to several other students and herself needing to be quarantined.

Although Plumlee tested negative, she stayed at home for 14 days per district protocol. She continued to teach her classes during that time. That was no easy task, considering her students were split between home and school due to the outbreak.

“This is the most difficult thing about teaching in this situation,” she said. “We want to give our students the very best, regardless of which platform they’re on, especially because it’s not their fault. We’re trying to mirror our classrooms online as much as we are in person.”

While quarantined, Plumlee continued to teach the students still at school — who now were being watched by a substitute — using Google Meet. She hosted separate online teaching sessions for the students also under quarantine.

Plumlee estimates she spent about four to five hours on the computer each day meeting with students individually and in groups to ensure they all received opportunities for face-to-face learning.

There have been only a few positive cases, she said, and none has been in the past few weeks. She said the experience reminded her that she much prefers teaching in person than remotely.

But face-to-face learning in the world of COVID-19 isn’t easy, though. For example, the use of masks — while necessary — makes it harder to pick up on certain physical cues that teachers normally rely on so much.

“There’s a struggle in teaching when kids are in masks and we’re in masks,” she said. “Not being able to see their facial expressions makes it difficult because that’s a big part of how you can tell whether they’re understanding or lost.”

Jenks High School math teacher Diana Sutton said she’s thankful to be teaching in person this year, even though her workload definitely has increased.

Sutton said she has at least one or two students in each class doing distance learning right now because they’re quarantined.

“That means having to make sure all the assignments and notes and videos are posted daily online to make sure those students can keep up and don’t get two weeks behind just because they have to quarantine,” she said.

After almost 11 months of distance learning, Tuesday was the first day of in-person instruction for Tulsa Public Schools’ Tier 3 and 4 special education students, as well as fourth, fifth, sixth and ninth graders, plus seventh graders at the district’s junior high schools. #oklaed

In an average week, 82 percent of Tulsa students are regularly logging in online and participating, with higher rates among the older elementary grades.

Meanwhile, turnover continues on governing board for the operator of Oklahoma’s largest online public school. #oklaed

The Tulsa Health Department has partnered with Saint Francis Health System, Passport Health and Total Wellness to vaccinate teachers and other school staff serving students in pre-kindergarten through 12th grade across the county.

Although the family is excited at the prospect of in-classes starting soon, the last 11 months have been a learning experience for everyone at the Smith house.

The Oklahoma State Department of Health on Monday added teachers and other school employees in grades pre-K through 12, in addition to Oklahom…

Jenks Freshman Academy and Jenks High School will remain in distance learning through Wednesday while clean-up efforts continue from water damage sustained during the mid-February stretch of ice, snow and subfreezing temperatures.

The Winters case is one of five teacher misconduct cases in recent years whose handling by the Oologah superintendent and school board resulted in sanctions by the Oklahoma State Board of Education. #oklaed