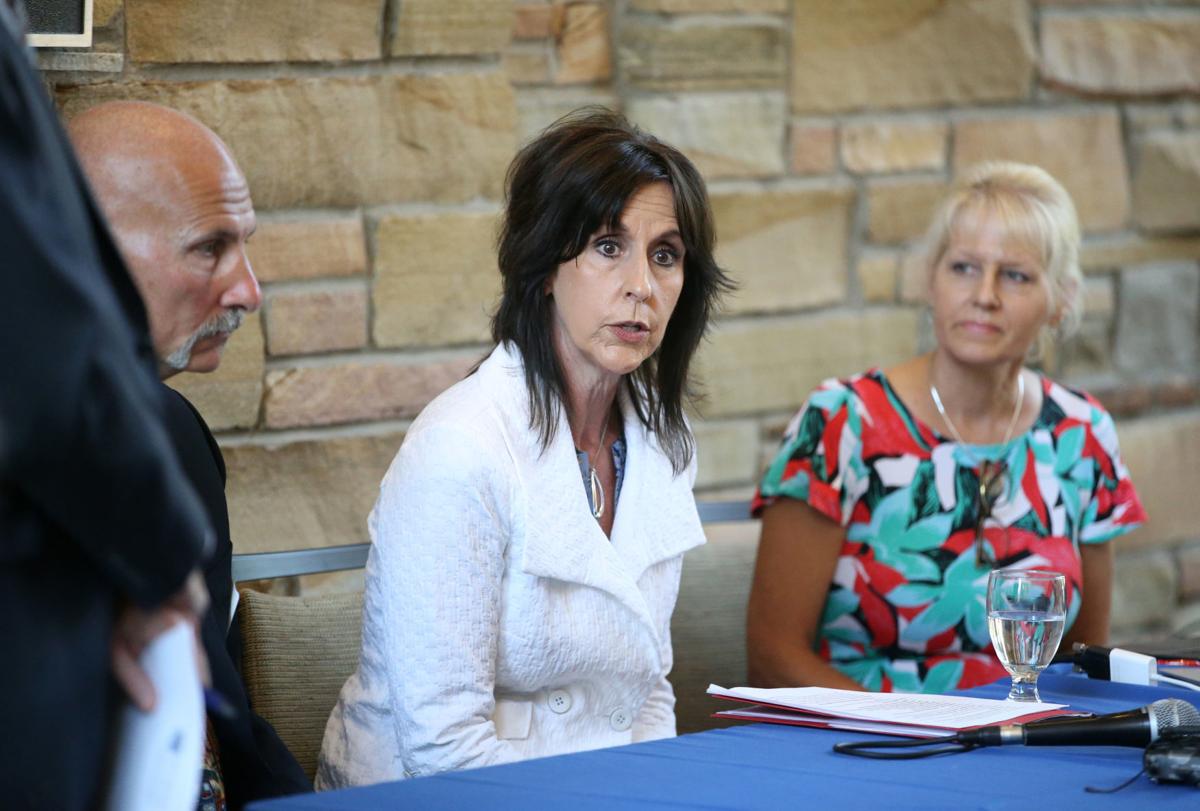 The 2017 Oklahoma Teacher of the Year, Jon Hazell (left), Deputy State Superintendent Robyn Miller and Northeastern State University Dean of the College of Education Vanessa Anton take part in a panel discussion at the University of Tulsa on Monday. MATT BARNARD/Tulsa World 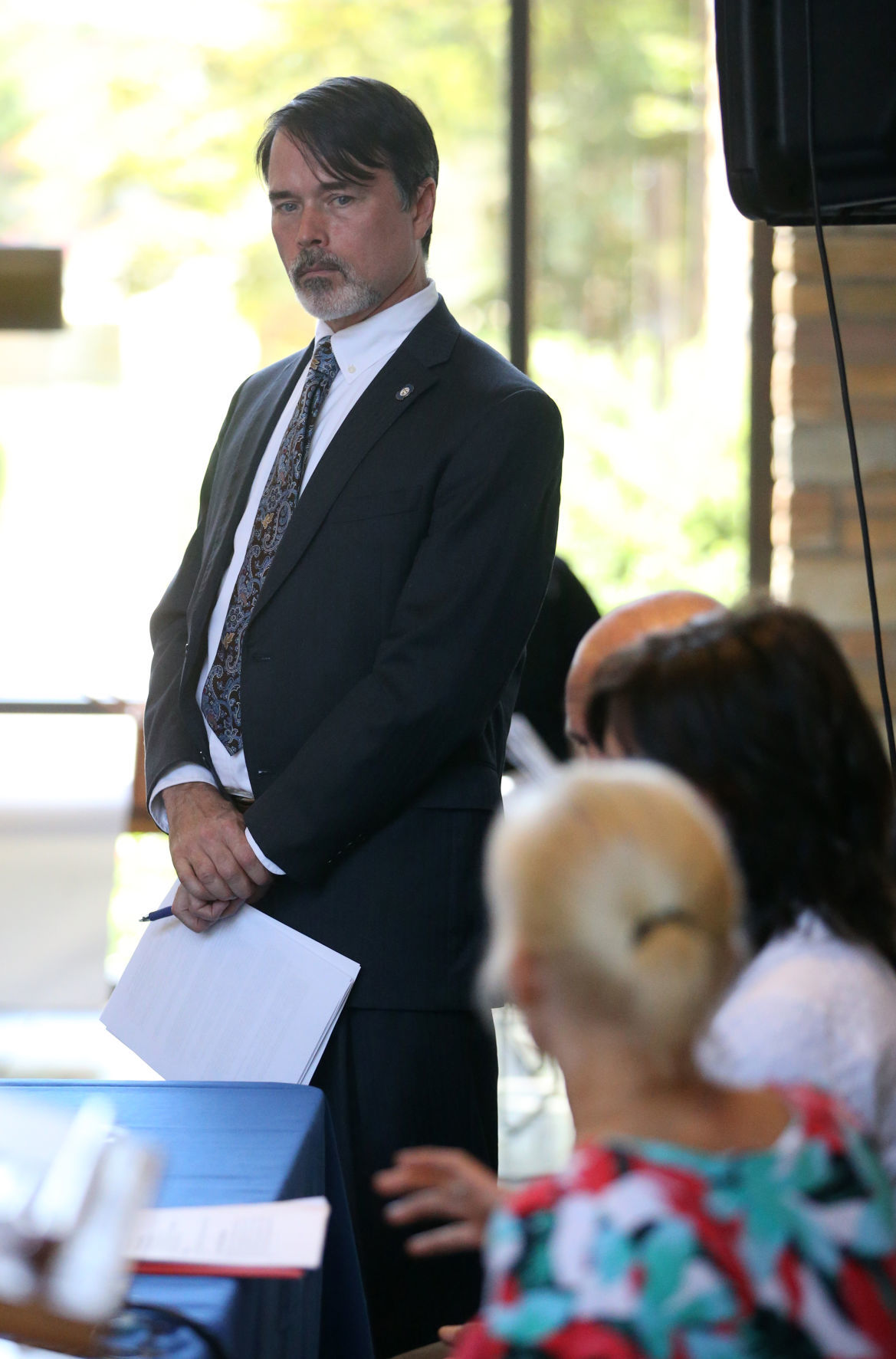 State Rep. John Waldron takes part in a panel discussion of educators at the University of Tulsa on Monday. MATT BARNARD/Tulsa World

The 2017 Oklahoma Teacher of the Year, Jon Hazell (left), Deputy State Superintendent Robyn Miller and Northeastern State University Dean of the College of Education Vanessa Anton take part in a panel discussion at the University of Tulsa on Monday. MATT BARNARD/Tulsa World

State Rep. John Waldron takes part in a panel discussion of educators at the University of Tulsa on Monday. MATT BARNARD/Tulsa World

Leaders of teacher education across the state came together Monday for a summit in Tulsa on long-term solutions to Oklahoma’s teacher shortage.

The Oklahoma Teacher Pipeline Summit was meant to serve as a precursor to an interim study on possible policy solutions in the Oklahoma House of Representatives in late September.

“It’s inequitable that not every kid has the same access to the same quality of teaching. That’s why we’re here today,” said one of the hosts, Elizabeth Smith, assistant professor and chairwoman of the Department of Education at the University of Tulsa.

As Oklahoma plunged into a statewide teacher shortage almost six years ago, school districts became increasingly reliant on new hires who have not yet completed the state’s requirements for either traditional or alternative teacher certification.

Applications for emergency certifications for such individuals used to be a rarity, with just 32 emergency teaching certificates approved by the Oklahoma State Board of Education in a single year in 2011-12.

By comparison, Oklahoma public schools hired 3,038 nonaccredited teachers to work in classrooms in 2018-19, representing a 54% increase over the previous school year’s 1,975.

Smith said the use of the term “certification” tied to this growing trend is misleading parents about the lack of qualifications of the majority of these new emergency hires.

“We need to help the public be aware of the vast differences between standard and alternative certification and emergency certification,” said Smith. “It means they have a bachelor’s degree.”

Robin Fuxa, director of professional education at Oklahoma State University, noted that there have been high turnover rates among new teachers hired with emergency certification. And she said there are heavy concentrations of those individuals working in “high-needs” schools in the state’s two urban centers, with the highest percentages of students of color, English learners and children in poverty.

Because so many of these underqualifed teachers are working in neighborhoods with a “history of systematically denying (children) a quality education,” the practice “feeds the myth of the culture of poverty,” Fuxa said.

“Those who want to privatize can say ‘public schools are failing.’ We have to fund our schools equitably, working to offset our long history of inequity,” said Fuxa.

• State-funded loan forgiveness or scholarships for university-prepared teachers who commit to employment in an Oklahoma public school.

• The allocation of an estimated $600,000 annually to cover the cost of certification exams for university-prepared teachers.

• Signing bonuses for university-prepared teachers who commit to working at least three years in public schools.

Other representatives from the Oklahoma Association for Colleges of Teacher Education, or OACTE, shared their unique initiatives to try to better recruit and retain future teachers.

For example, TU is creating a minor in STEM education, which stands for science, technology, engineering and math, so future educators can gain greater knowledge in the subjects and training in how to integrate STEM into their lessons. And Mid-America Christian University is launching a master’s degree program in curriculum and instruction.

Vanessa Anton, dean of the College of Education at Northeastern State University and president of OACTE, said NSU has been trying to be responsive to schools’ current needs.

Examples there include curriculum changes to include courses in childhood trauma, dyslexia and new classroom management strategies, as well as finding new ways to accelerate advanced degree programs and creating specialized teacher internships for urban and rural settings.

“We do not have to do it the way we’ve always done it,” Anton said. “We have to get out of that box in our head.”

Deputy State Superintendent Robyn Miller said she thinks one area of need that policy makers might focus on is “new teacher induction,” or the extra supports and mentoring teachers need to be successful and to remain in the profession after their first one to three years in the classroom.

She also called for better communication about exactly what Oklahoma schools need from the state’s teacher preparation programs.

“Districts and ‘providers’ (of new teachers) need to get together more to communicate their needs,” said Miller. “That’s not something we’ve been very good at. It’s supply and demand.”

Lawmakers present included the two requesters of the interim study on the teacher pipeline, state Reps. Melissa Provenzano and John Waldron, both D-Tulsa, as well as Rep. John Talley, R-Stillwater.