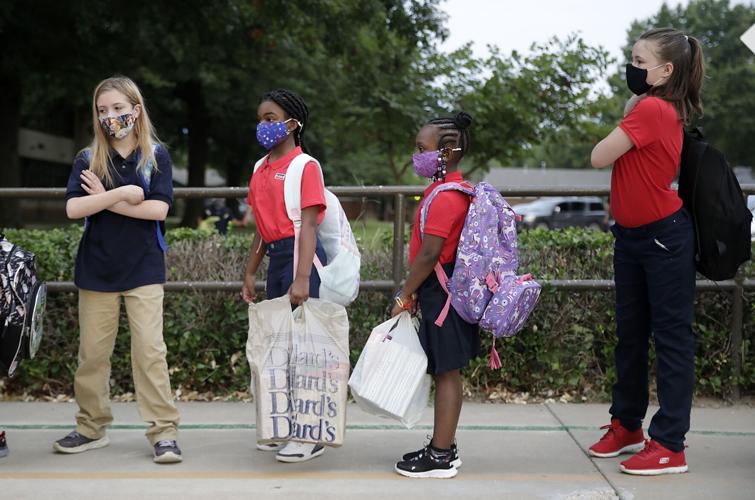 Students wear masks as they wait to enter Wayman Tisdale Fine Arts Academy in Tulsa on the first day of classes. In response to a lawsuit challenging a law prohibiting schools from enforcing mask mandates, an Oklahoma County judge has put that law on hold. 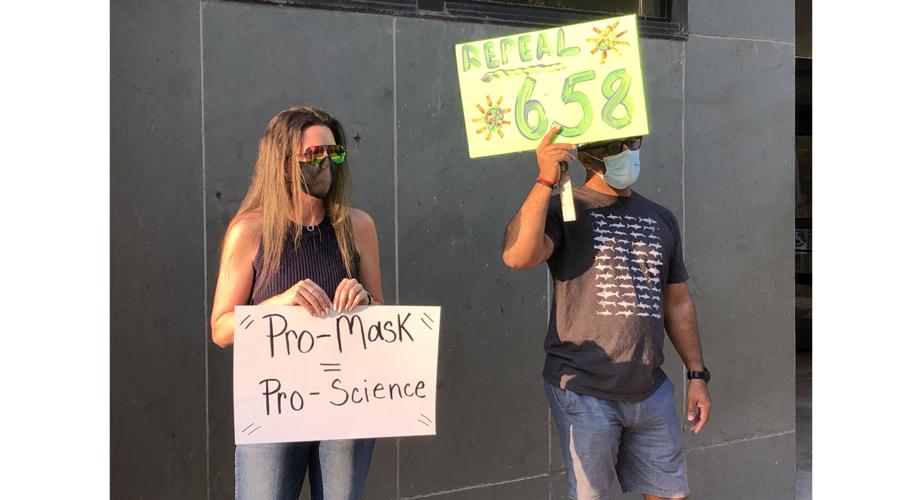 Before a court hearing in Oklahoma City on Senate Bill 658, Nikki Papin and Roger Nayar, both of Edmond, both of Edmond, support the challenge to the law that prohibits school districts from enacting mask mandates without an emergency order from Gov. Kevin Stitt.

OKLAHOMA CITY — A state law banning mask mandates in schools was put on hold Wednesday by an Oklahoma County judge.

The temporary injunction imposed Wednesday by District Judge Natalie Mai will not take effect until the written order is filed, perhaps next week. The ruling applies to K-12 schools.

State Superintendent Joy Hofmeister issued a statement later Wednesday, saying that “the Oklahoma State Department of Education will not enforce the mask mandate prohibition due to this pending litigation. Further guidance will be provided once the litigation concludes.”

“Today is a victory for families, the safeguarding of schoolchildren and their opportunity to learn in person,” Hofmeister said. “The court’s striking of the mask mandate prohibition on (Senate Bill 658) now enables schools to fulfill their duty to protect and ensure equal protection for all students, including those with disabilities and (the) most vulnerable in our schools.”

A group of parents and the Oklahoma State Medical Association had challenged the implementation of Senate Bill 658 on several grounds.

Chad Taylor, an attorney for the plaintiffs, said that “this law (SB 658) is fatally flawed.”

He said it violates due process, equal protection and the state’s single-subject rule while being a special law the state had no compelling interest to pass.

The judge determined that because the measure applied to public but not private schools even though the risk to people at both kinds of institutions is equal, it had created an unconstitutional division.

Schools that implement mask mandates while the case is pending must provide for exemptions, Mai said. She said lawmakers have made it clear that parental choice is important.

Attorney General John O’Connor expressed appreciation in a statement about the “very limited injunction,” saying: “While we disagree that any part of the law is unconstitutional, my office will take the time afforded to us to determine the best legal strategy moving forward.”

Cleveland said that because the law applies to all public schools, it is not an unconstitutional special law.

Likewise, it does not violate the requirement that laws contain one subject because it deals with health and safety in schools, he maintained.

“They are asking for a statewide mask mandate,” Cleveland said.

Taylor said there is no absolute right to spread a virus.

“We don’t have to wait for the ship to hit the iceberg before we hand out life vests,” the plaintiffs’ attorney said.

Mai said it is up to the Legislature to determine policy and that the court will not substitute its judgement for that of lawmakers. The only issue before the court was whether the law as written is constitutional, she said.

Taylor said schools now have the option, as a result of the judge’s ruling, to require masks if they provide some exemptions.

Mai’s ruling applies only to the prohibition on mask mandates and not other sections of the law, such as precluding vaccination requirements to attend secondary and postsecondary schools.

Even though a temporary injunction was imposed, Gov. Kevin Stitt, who signed the bill into law and was named as a defendant in the lawsuit challenging it, called the ruling “a victory for parental choice, personal responsibility and the rule of law.”

Stitt said parents have the right to make decisions about the health and education of their children.

The measure, which took effect July 1, bans school mask mandates unless there is an emergency declaration from the governor.

“It’s important to remember that while we’ve seen how easily COVID can spread in schools, the virus doesn’t stay within school walls,” Clarke said. “For each infected student, there is a risk of additional infections amongst their friends, family and the community.”

Sen. Rob Standridge, R-Norman, the author of SB 658, issued a statement Wednesday, saying that “while I am still reviewing what the judge had to say, I am encouraged by her statements that respect the Legislature’s intent to entrust parents whether to mask or not to mask their child. Ultimately, we must uphold the right of Oklahoma parents to decide what is best for their own children.”

As Sand Springs saw a 23% increase in transfer students, two transfers in Jenks that were denied due to capacity concerns made that district the subject of frustration with the limits of Senate Bill 783. #oklaed

Tulsa school board redistricting won't be implemented until after April election

The school board's part of the process has to be completed by Dec. 31. But because the TPS board has missed a different deadline, the State Election Board won't implement changes until after the next school board election. #oklaed

With 12 area elementary schools starting new debate programs in 2022, more local students are learning how to build and argue a case at a young age. #oklaed

Filing window opens for more than 20 school board seats

The filing period opens Monday for more than 20 school board seats around the Tulsa area. #oklaed

"We got notice the other day that the price of PVC has gone up 42%. It’s crazy.” #oklaed

Youth forum offers opportunity to have conversations with police officers

TPD officer in training Bailey Lewis viewed the sit-down session as a chance to show students that police officers are regular people. #oklaed

The Oklahoma School of Science and Mathematics has received a $100,000 grant from Google to expand its statewide virtual program. #oklaed

Nicole Mann answered questions from Pawhuska youths that ranged from how the space station is powered to whether astronauts grow tomatoes.

Scientists: Why there's more light than there should be in the universe

The reason Japanese fans clean up after World Cup matches

The reason Japanese fans clean up after World Cup matches

A winter wonderland in Denmark? Why you should visit Tivoli Gardens in December

A winter wonderland in Denmark? Why you should visit Tivoli Gardens in December

Students wear masks as they wait to enter Wayman Tisdale Fine Arts Academy in Tulsa on the first day of classes. In response to a lawsuit challenging a law prohibiting schools from enforcing mask mandates, an Oklahoma County judge has put that law on hold.

Before a court hearing in Oklahoma City on Senate Bill 658, Nikki Papin and Roger Nayar, both of Edmond, both of Edmond, support the challenge to the law that prohibits school districts from enacting mask mandates without an emergency order from Gov. Kevin Stitt.