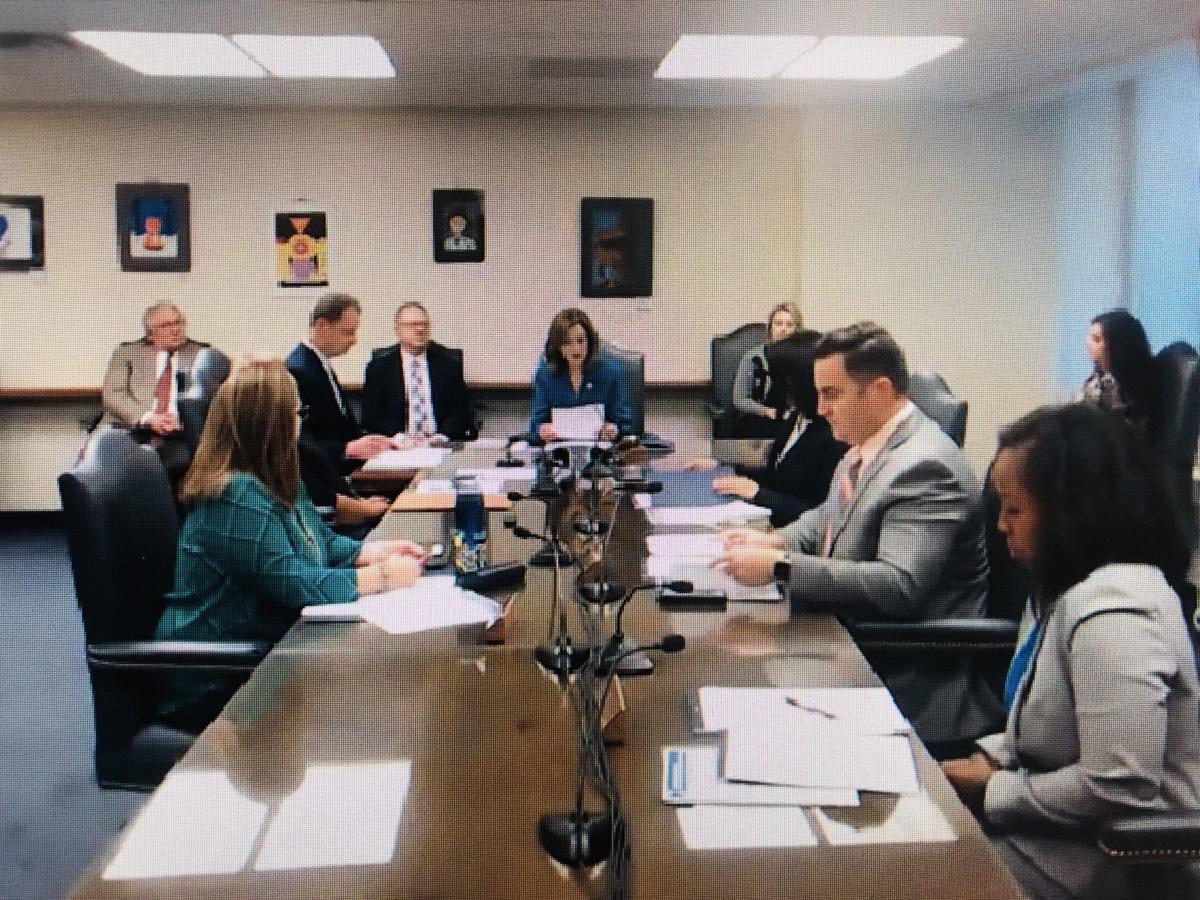 A screenshot shows a livestream of an emergency meeting of the state Board of Education on March 16. 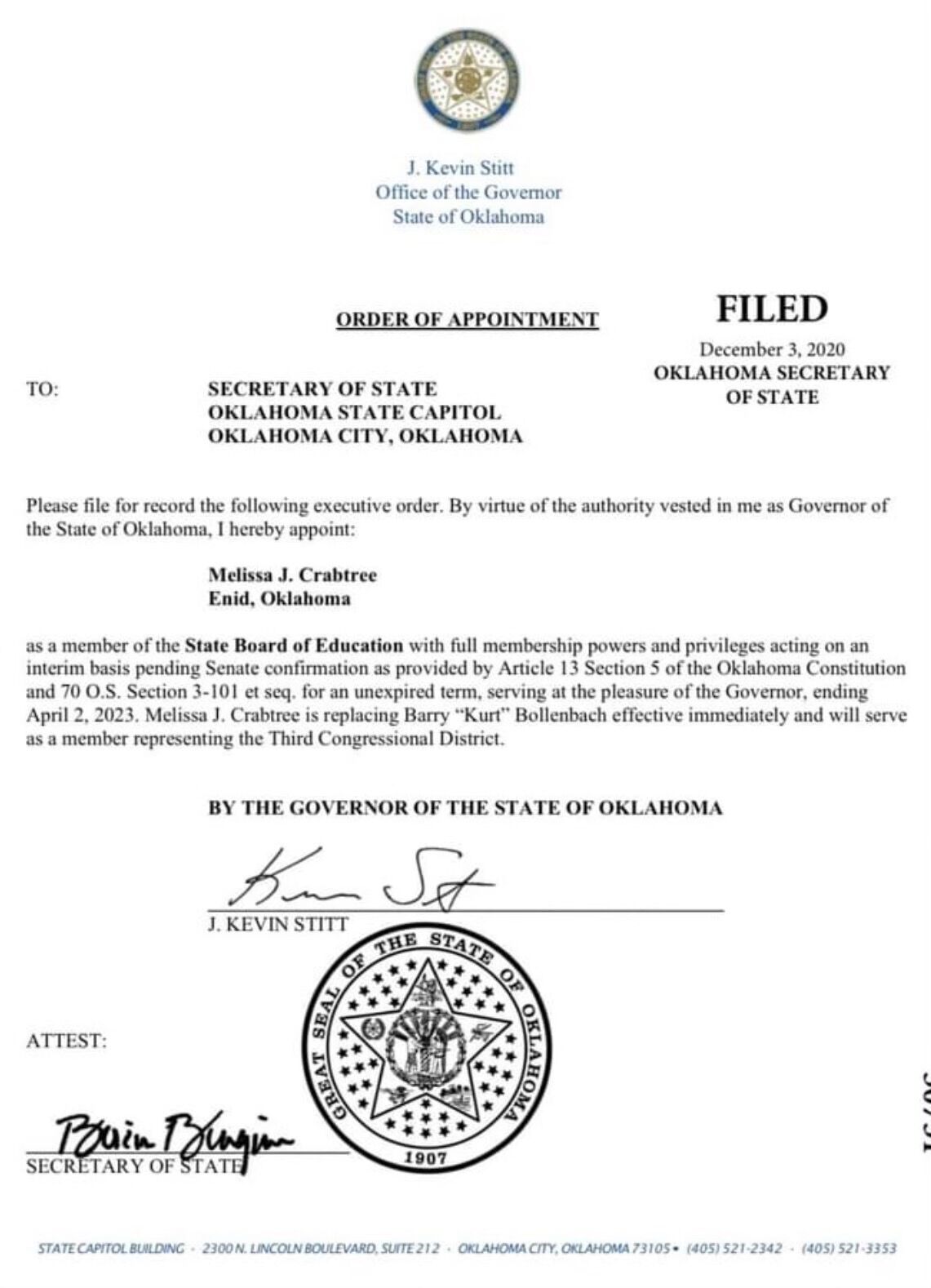 Oklahoma Secretary of State record filed Thursday shows Gov. Kevin Stitt has replaced his own appointee to the Oklahoma State Board of Education, Kurt Bollenbach, with an Enid resident named Melissa Crabtree, effective immediately. Bollenbach had been appointed to serve a four-year term through April 2023.

Gov. Kevin Stitt abruptly replaced one of his own appointees to the Oklahoma State Board of Education this week.

Kurt Bollenbach of Kingfisher, who was appointed in April 2019 to serve a four-year term, recently supported a high-profile move to claw back more than $11 million in state funding from Epic Charter Schools and a failed attempt to mandate masks in all public schools.

He also recently drew public criticism from school choice advocates for leading a delay of approval for a couple of private schools to begin accepting state-funded scholarships for disabled students and foster children over questions about whether the schools’ anti-discrimination policies met minimum state and federal requirements.

Bollenbach told the Tulsa World he wishes he had been allowed to serve out his full term. He said he received no advanced notice or explanation for his removal, nor had the governor’s office expressed any recent complaints or concerns about his positions or public comments as a board member.

It was Stitt’s second such action in three weeks’ time.

In mid-November, Stitt removed the president of the Statewide Virtual Charter School Board who recently led the initiation of termination proceedings against Epic Charter Schools and challenged two other board members over their potential conflicts of interest with Epic.

Only two days earlier, John Harrington, then-president of the state’s virtual charter school board, had notified Stitt’s office of his intent to call a special meeting Nov. 18 so the board could consider voting to force members Mathew Hamrick and Phyllis Shepherd to recuse themselves from any matters related to Epic.

As first reported in the Tulsa World, Shepherd is a relative of one of Epic’s two co-founders, who reportedly have become millionaires through their deal to manage the school, and Hamrick accepted campaign donations from one of the Epic co-founders in Hamrick’s failed bid for a state Senate seat.

After Harrington’s sudden removal, the Nov. 18 meeting was canceled. Harrington’s term ran out in October, but he told the Tulsa World the governor’s office gave no indication they intended to take action to replace him amid so much unfinished business.

A group of Democratic lawmakers responded to Stitt’s replacement of Harrington by issuing a formal call for Shepherd and Hamrick to resign, but to date, there has been no response. That board’s next regularly scheduled meeting is next week.

Meanwhile, the state Board of Education in November tabled a discussion to take punitive action against the state accreditation status of Epic Charter Schools.

That board’s attorney had laid out a case for putting Epic’s two schools on probation based on what he described as a yearslong history of “nonresponsiveness and noncompliance” with state Department of Education requests for information about its use of taxpayer dollars — as well as new deficiencies recently identified in Epic’s federally funded programs for special education and homeless students and English learners.

Although they put off a vote, several board members including Bollenbach expressed dismay about numerous examples of Oklahoma’s largest school district not responding to state education officials’ inquiries about how taxpayer dollars were being handled.

“I would say to any public school out there, if you are paying for goods and services and you don’t know what you’re paying for, that is unacceptable,” Bollenbach said. He later pointedly asked Epic’s local school board president to make it his personal business to follow-up on questions school administrators had left unanswered.

In October, the state Board of Education voted unanimously to demand back $11.2 million in taxpayer funding from Epic based on a state investigative audit that identified chronically excessive administrative overhead costs and inaccurate cost accounting.

Bollenbach represented Congressional District 3. His bio on the state Department of Education website states he is currently managing director of a small independent oil and gas operator in northwest Oklahoma and previously worked as an attorney in private practice, for the Canadian County District Attorney’s office and on active duty with the United States Army Judge Advocate General’s Corps.

Asked to explain Stitt’s action this week, the governor’s spokesman Charlie Hannema released the following written statement: “Melissa Crabtree is a former teacher and social worker who is passionate about using her experience in the classroom to improve educational outcomes for all Oklahoma students. The governor believes she will be a great addition to the State Board of Education and appreciates Mr. Bollenbach’s service to our state.”

Asked about Stitt’s action this week, State Superintendent Joy Hofmeister told the Tulsa World she would miss Bollenbach’s “bold leadership” on the board and hopes for a good working relationship with his appointed successor.

“Kurt Bollenbach has been an exceptional board member whose legal acumen, breadth of experience and commitment to excellence have been of great value to the State Board of Education,” Hofmeister said. “He is a man of tremendous principle and integrity.”

As for Bollenbach, he reacted to Stitt’s removal this way: “I am a firm believer in the rule of law, and under our system, it is the governor’s sole prerogative who he appoints or removes from this board.”

He also offered praise for the “thankless work” of the state Department of Education and classroom teachers across the state, as well as the state Board of Education.

“Superintendent Hofmeister’s class-act leadership and the understaffed SDE employees’ tireless efforts have our education system moving in a positive direction,” Bollenbach said in an interview with the Tulsa World. “The state Board of Education works just as a governing board should — dissecting issues; passionately arguing; actively listening; compromising as a team; and most importantly, respecting each other, all in an effort to solve problems, not agendas.

“I am confident the board will continue to work in that manner. My absolute best wishes to Ms. Crabtree as I am confident she will put just as much effort into the job as I have.”

By law, the governor appoints only one member of the five-member Statewide Virtual Charter School Board but appoints all six non-elected seats on the state Board of Education, with the elected state superintendent of public instruction serving as chair and being a voting member.

After his election, Stitt chose to reappoint only one of former Gov. Mary Fallin’s appointees, Bill Flanagan, who is the mayor of Claremore.

What is known about Stitt’s new appointee?

Melissa Crabtree is Gov. Kevin Stitt’s pick to fill out the unexpired term of Kurt Bollenbach, whom Stitt removed Thursday. Crabtree’s appointment is pending confirmation by the Oklahoma State Senate.

The Enid resident posted her reaction to the news on Facebook, saying she was recommended to replace Bollenbach by a person she did not name publicly, whom she said “knows I believe strongly in religious freedom and school choice and am willing to stand up for what I believe is right.”

She called her appointment “an opportunity I wasn’t even looking for, but one for which I am thankful … I want to steward this well, and anything [that] affects our kids has a generational impact. What a privilege this is!”

Crabtree described herself as a former public school teacher with inner-city and rural experience who has 14 years’ experience as a homeschool teacher. She made headlines in Enid this year for founding a group to fight city mandates for face masks during the COVID-19 pandemic and some elected officials who supported them.

But a deeper dive into her social media connections revealed close contacts with individuals with another concern entirely.

Among her Facebook friends are Brandon Dutcher, senior vice president of the Oklahoma Council of Public Affairs, a conservative policy advocacy group, and Jennifer Carter, senior advisor for the American Federation for Children in Oklahoma, which successfully lobbied to expand the Lindsey Nicole Henry Scholarship program from special education students to also include foster children in state-funded vouchers for private schools.

Carter’s husband Ray Carter is one of several writers for OCPA who have blasted Bollenbach and the state Board of Education’s attorney Brad Clark for questioning whether two private schools that applied to become first-time recipients of Lindsey Nicole Henry scholarships meet minimum state and federal standards for anti-discrimination policies.

As part of the alternative school’s redesign, its students were asked in the fall of 2019 for input. Among the items specifically brought up was the name, and after group research projects, the students kept coming back to the name North Star Academy.

Carson grew up in Jenks and represented Oklahoma's 2nd Congressional District from 2001-05.

A screenshot shows a livestream of an emergency meeting of the state Board of Education on March 16.

Oklahoma Secretary of State record filed Thursday shows Gov. Kevin Stitt has replaced his own appointee to the Oklahoma State Board of Education, Kurt Bollenbach, with an Enid resident named Melissa Crabtree, effective immediately. Bollenbach had been appointed to serve a four-year term through April 2023. 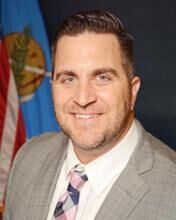