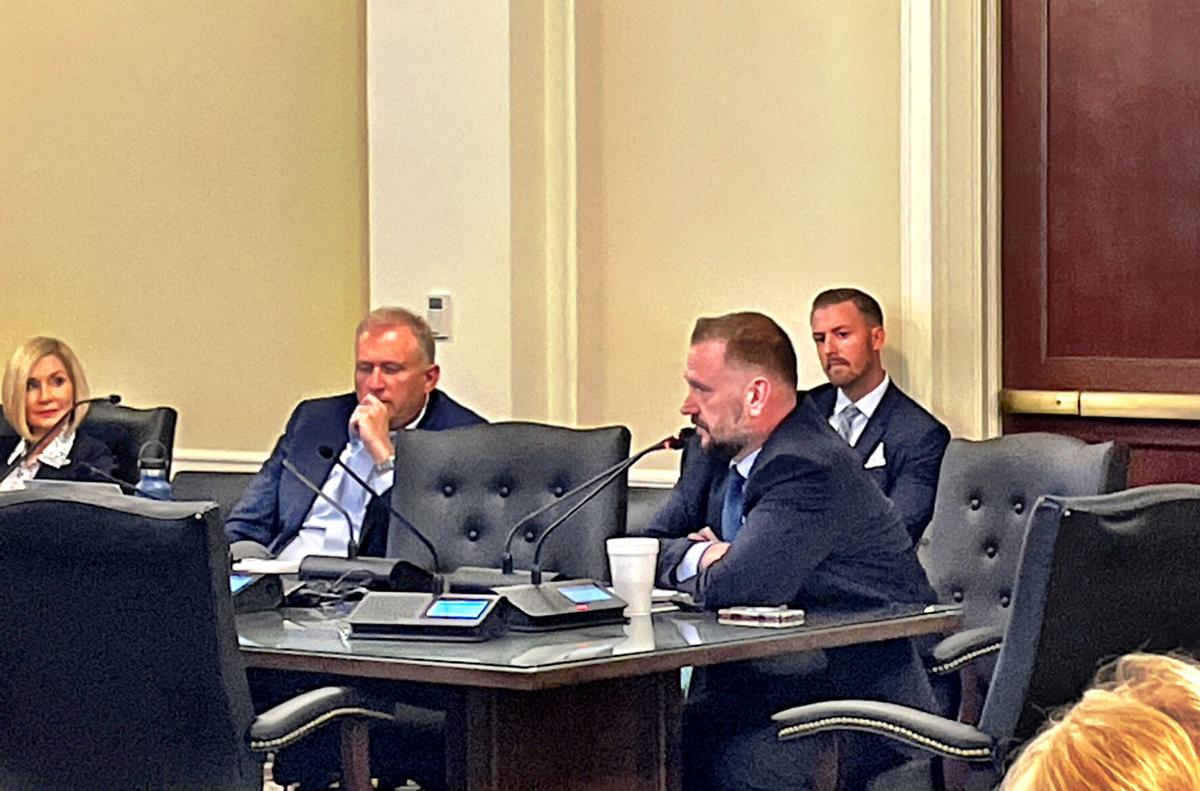 Paul Campbell, Epic board chair, speaks Monday during a House interim study requested by Rep. Sheila Dills, R-Tulsa. Seated behind him is Secretary of Education Ryan Walters. Campbell said he had personally seen evidence of embezzlement in Epic’s past finances. A couple of lawmakers described Campbell's choice of words as “extreme” and also “really enlightening." 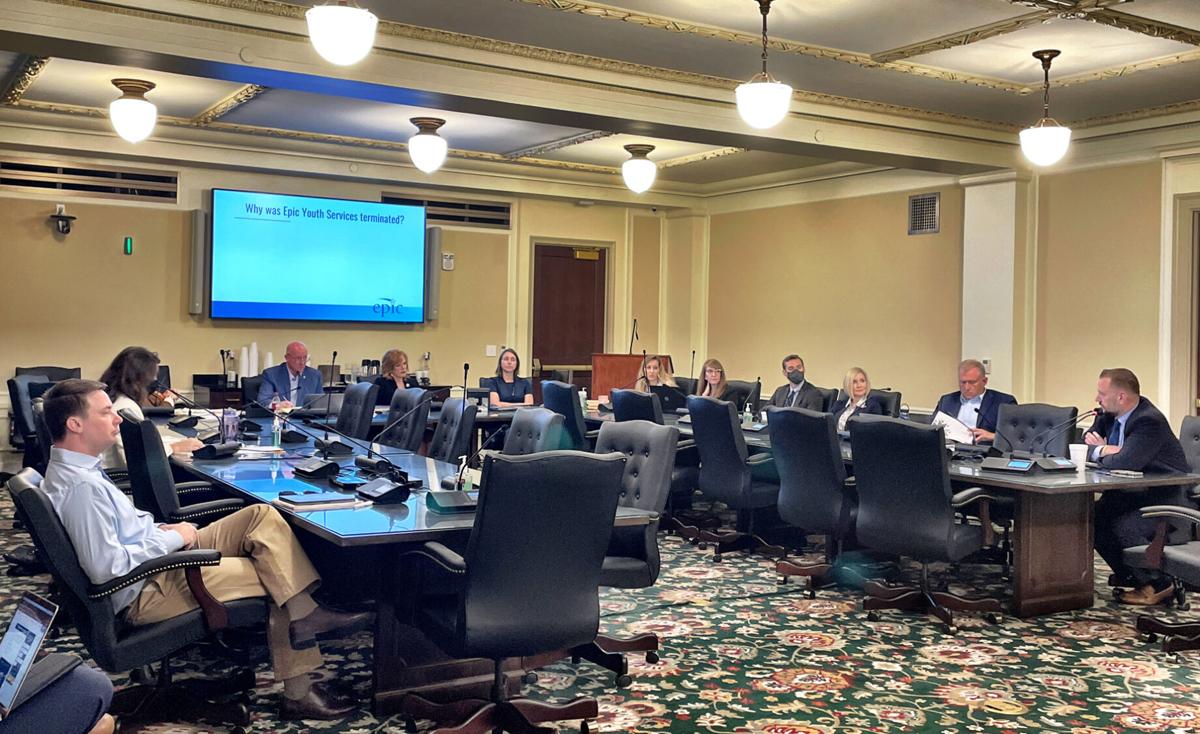 OKLAHOMA CITY — Epic Charter Schools’ new governing board chairman told lawmakers Monday that they had been “gaslighted” for years by Epic’s recently ousted founders, suggesting that they now would be open to legislation intended to prevent millions in taxpayer dollars from being paid to “grifters.”

Without naming them personally, Epic Chairman Paul Campbell accused David Chaney and Ben Harris, school co-founders and owners of the for-profit school management company Epic Youth Services, of being “prolific liars” and “bad actors” for taking a 10% cut of every school dollar based on false pretenses.

“Maybe 1% was reasonable — maybe,” said Campbell, speaking at a legislative interim study at the Oklahoma Capitol. “Over the past 10 years, these guys were paid millions for work the school was doing themselves anyway. It didn’t make sense, in my opinion.”

Rep. Sheila Dills, R-Tulsa, has been the architect of two previously enacted pieces of legislation to try to ramp up fiscal transparency and accountability requirements for charter schools amid a yearslong and still ongoing investigation into Epic by state and federal law enforcement.

At the conclusion of Campbell’s remarks, Ryan Walters, Gov. Kevin Stitt’s secretary of education and a 2022 candidate for state superintendent, greeted Campbell with a handshake and a big slap on the back.

Campbell declined to answer any questions, such as whether he has reported to law enforcement the examples of embezzlement in Epic’s previous finances that he told lawmakers he had seen since joining the school’s governing board.

By morning’s end, Dills said there is a clear case for requiring training in fiduciary responsibilities for all schools’ governing board members.

“I have already identified a partner in the state Senate to work together to get both chambers to understand how important board training is,” Dills said. “There has to be a way to ensure taxpayers that all public schools are paying a fair market value for goods and services.”

She called it “alarming” that several virtual charter schools’ representatives were unclear when she asked about the percentage of public school dollars they were paying their EMO or CMO.

For example, Audra Plummer, leader of Oklahoma Virtual Charter Academy, said her school of 3,200 students pays a national EMO called Stride K12 “up to 3% and no more than 12%” with the exact cut negotiated each year.

State Auditor and Inspector Cindy Byrd said many school board members may not realize they are personally liable. She suggested to lawmakers that required board member training include the Internal Revenue Services’ stringent rules for how nonprofit boards, which are in place at all of Oklahoma’s charter schools, spend funds.

Another suggestion from Byrd was that board training include examples of what not to do — similar to “scared straight” lessons high schoolers receive about the high-stakes consequences of drunken driving. These could include nonprofit board members being financially penalized by the federal government for not relying on “competitive consideration” even when bidding isn’t required in their spending decisions.

Campbell noted for lawmakers that severing all ties, including just such a management contract with Epic school founders, is already saving the school tens of millions of dollars this year. He said Epic has redirected a substantial portion of the savings to hiring more teachers so students can receive more individual attention.

He told lawmakers, a couple of whom described his choice of words as “extreme” and also “really enlightening” during the session, that he had personally seen evidence of embezzlement in Epic’s past finances.

Campbell said the circumstances were ripe for fraud because Epic Youth Services “exerted total control” and operated in silos to the point that the school’s superintendent, Bart Banfield — who has been retained — had never seen the school’s bank account, and Doug Scott, the school’s longtime board chair and Campbell’s predecessor, was kept in the dark or misled before Oklahoma’s state auditor and inspector issued a scathing investigative audit on Epic in October 2020. EYS was then ousted in May.

“These were con men. They gaslit a bunch of people,” Campbell said. He added that moving forward will require lawmakers who had become “big fans” of Harris and Chaney to also reassess the situation, because “they have gaslit a lot of people in the Capitol, and it’s time to stop.”

He related an anecdote from the day he was named Epic’s new board chairman in May, when he said he was confronted by “a very prominent businessman” he declined to name and told there was no way Epic Charter Schools could survive without Harris and Chaney.

As previously reported by the Tulsa World, it is known from public campaign reports that Epic’s founders and their backers poured at least hundreds of thousands of dollars into efforts to influence state elections over the last decade.

The influence continued through last session, when a recommendation from Harris that would have allowed Epic to select its own auditor found its way into a bill that passed the Senate floor.

The day after Byrd released an audit highly critical of Epic’s handling of tens of millions of taxpayer dollars, Harris and his wife, Elizabeth VanAcker, each gave maximum campaign donations of $2,800 allowed per election cycle to the bill’s author, state Sen. Paul Rosino, R-Oklahoma City.

Harris and Chaney released a statement through their attorney Monday afternoon, telling the Tulsa World: “The opinions of Paul Campbell are in direct conflict with the truth. We will not engage in the same type of name calling that Mr. Campbell did today for purposes of political grandstanding.”

The Oklahoma Foundation for Excellence is accepting nominations for 2022 Academic All-State and the Oklahoma Medal for Excellence. The non-profit organization will recognize the honorees in May.

Paul Campbell, Epic board chair, speaks Monday during a House interim study requested by Rep. Sheila Dills, R-Tulsa. Seated behind him is Secretary of Education Ryan Walters. Campbell said he had personally seen evidence of embezzlement in Epic’s past finances. A couple of lawmakers described Campbell's choice of words as “extreme” and also “really enlightening."