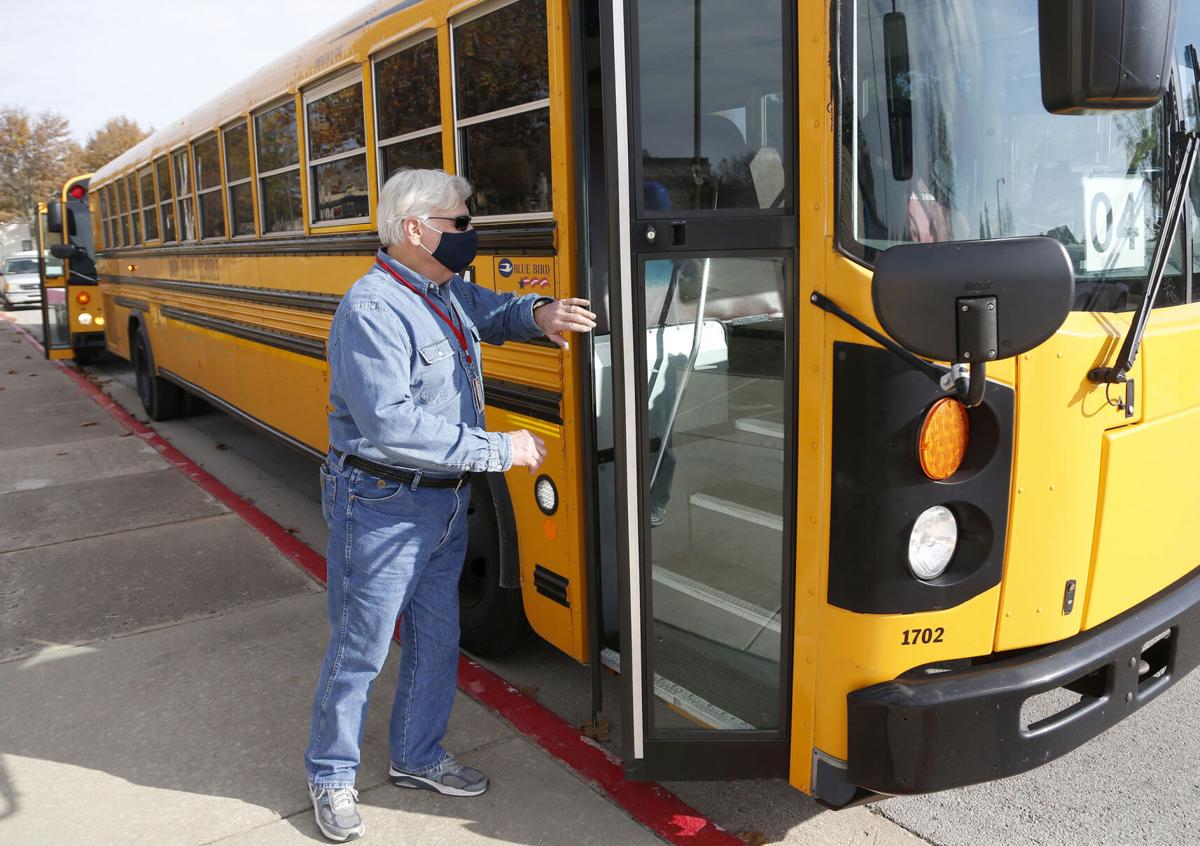 Union school district bus driver Raymond Marks opens the door before Darnaby Elementary students get on the bus after school on Friday. Worsening COVID-19 infection rates across the Tulsa metro have led to debilitating staffing shortages among bus drivers and substitute teachers throughout suburban districts. 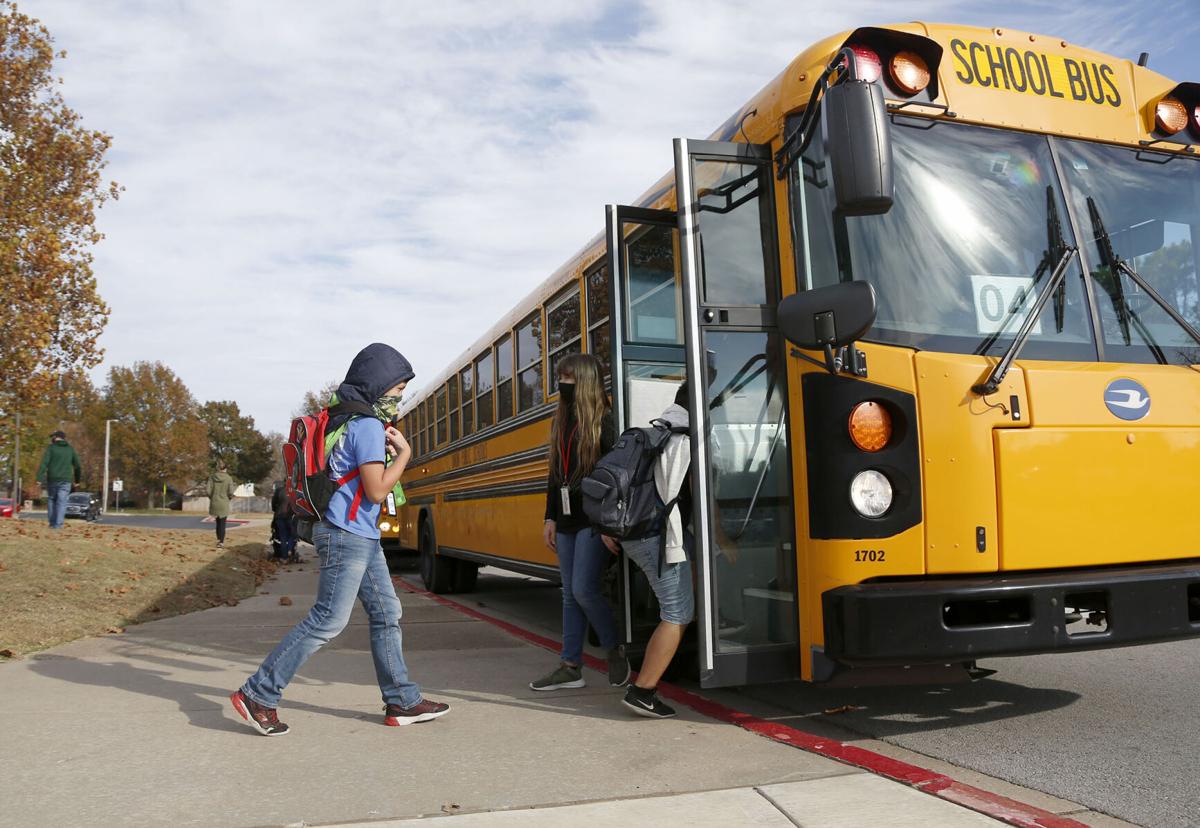 Darnaby Elementary School student bus captain Grace Conatser watch students get on the bus after school last week. Union Public Schools announced Wednesday that it would shut down its transportation services for at least the rest of this week due to a lack of bus drivers.

Worsening COVID-19 infection rates across the Tulsa metro have led to debilitating staffing shortages throughout suburban districts, resulting in a near total shutdown of secondary schools.

Districts are suffering from a glaring absence of bus drivers and substitute teachers this school year. The impact of these losses have escalated in recent weeks to the point that superintendents are deciding to transition older students — and some younger ones — to distance learning for the next few weeks.

In the past two weeks, Bixby, Broken Arrow, Union, Glenpool, Skiatook and Jenks all have announced they are moving secondary students to distance learning until after Thanksgiving break.

The trouble for Bixby escalated earlier this month when a bus driver tested positive for COVID-19, and six others were quarantined for two weeks due to close contact. This led to an immediate loss of about 20% of the district’s drivers.

There also was the problem of not having enough long-term substitute teachers to fill the rooms of teachers who were being quarantined.

“The bad metaphor that I’ve been using is how much weight can you put on a camel’s back before it breaks? You can put this amount minus a straw,” Bixby Superintendent Rob Miller said. “And I think we’ve got to that point where we continue to add straw to the weight and because of the surging numbers in the community, which are then being mirrored in our schools, we have reached the point in many of our districts where it’s just not feasible to keep functioning.”

Miller said the district has tried everything it can this fall to keep schools open because administrators understand the impact that closures have on many families. Ultimately, however, the priority is to keep people safe while also operating within the district’s reduced ability to manage schools effectively.

Although elementary schools have been unaffected by the closures for the most part, Bixby Public Schools did order North Elementary School to switch to distance learning after the entire administration office was quarantined.

Bixby students, like most of those being affected at other districts, are expected to resume in-person instruction after Thanksgiving break on Nov. 30. Miller said the goal is to take it day to day and milestone to milestone.

“We’re just trying to manage,” Miller said. “If we can get to Thanksgiving, then we’re looking at can we get to Christmas?”

On Thursday, Union Public Schools reported that 19 employees were in isolation after testing positive for COVID-19, while another 102 were under quarantine for exposure.

With that many staff members out, it’s difficult to continuously supply enough substitutes and replacements to fill those positions. Teachers have been asked to cover other classes during their planning periods. Union also brought in a third-party company this year to help boost the district’s substitute numbers, but it hasn’t been enough to prevent school closures.

On Nov. 6, Union had 126 out of about 680 total teachers out of the classroom due to quarantines, said Jay Loegering, executive director of human resources at Union.

Additionally, more than 30% of Union’s bus drivers are under quarantine, and the district has not been able to maintain the number of routes needed to bring secondary students to school.

“Between that and then our local (COVID-19) numbers, we felt it was time to slow it down a little bit,” Loegering said.

Only one of Union’s elementary schools, Boevers, has transitioned to distance learning after nearly 25% of students there were quarantined.

Most elementaries, Loegering said, are able to avoid closures because students generally stay in the same classes with the same children. With less intermingling, the district usually can just send an entire class to distance learning instead of an entire school.

“You can’t have schools function with that percentage,” said Lori Kerns, assistant superintendent of personnel and administrative services at Broken Arrow Public Schools. “In normal years, you can pull classrooms together or put a couple classes in the gym if needed, but we have gone to the extreme to make sure that kids have a very limited exposure. We’re not allowing any combining of classes this year, so that makes it even more difficult right now.”

Gallery: COVID-19 basics everyone needs to know as the pandemic continues

Union school district bus driver Raymond Marks opens the door before Darnaby Elementary students get on the bus after school on Friday. Worsening COVID-19 infection rates across the Tulsa metro have led to debilitating staffing shortages among bus drivers and substitute teachers throughout suburban districts.

Darnaby Elementary School student bus captain Grace Conatser watch students get on the bus after school last week. Union Public Schools announced Wednesday that it would shut down its transportation services for at least the rest of this week due to a lack of bus drivers.