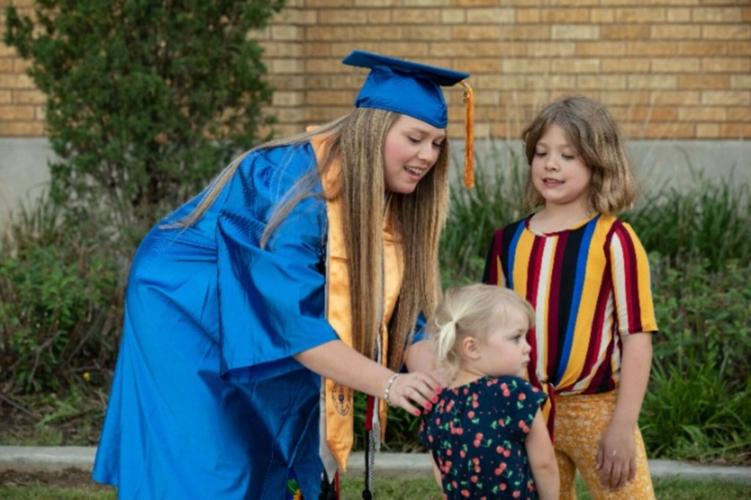 Sunny Wachsmuth talks to her daughters before her graduation ceremony last Friday from Tulsa Community College. Wachsmuth, 31, earned an associate's degree and will now start at OU-Tulsa on her bachelor's in early childhood education. 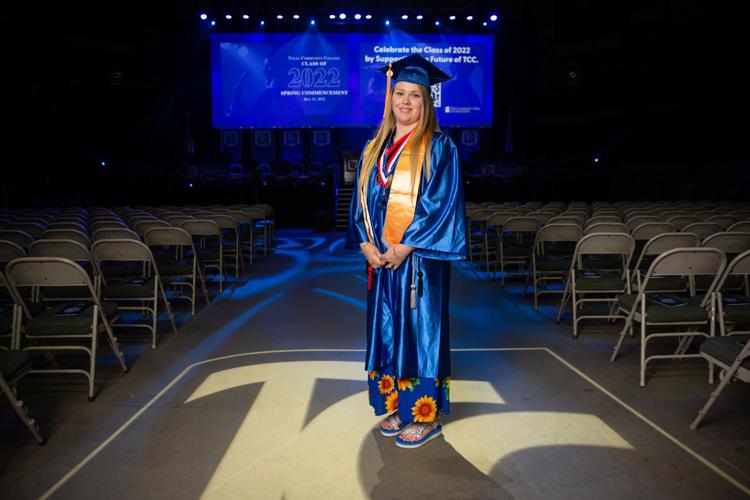 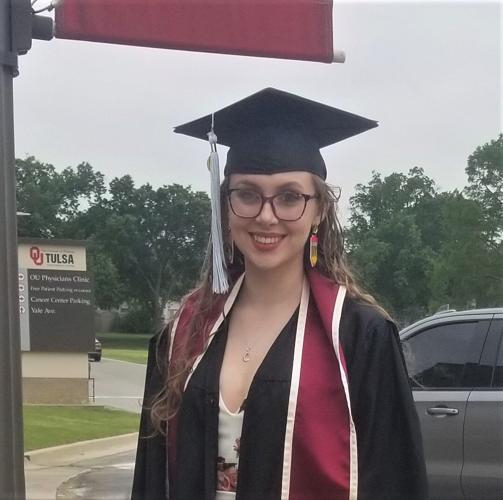 Carissa Lovell, a Booker T. Washington High School graduate, is now a graduate of the University of Oklahoma-Tulsa, too. She went through college debt-free, earning a bachelor’s degree in early childhood education, thanks to George Kaiser Family Foundation scholarship and loan programs.

At nearly 30 and with two young children, the idea of going back to college just didn’t seem realistic to Sunny Wachsmuth.

But what was really holding her back, she said, had nothing to do with her current circumstances.

“My therapist helped me finally see it,” Wachsmuth said. “It was a fear of failure.”

That realization, she added, helped give her the extra push she needed.

On Friday, just over a year since starting back, the Kiefer resident officially graduated from Tulsa Community College with her associate’s degree in early childhood education. One step closer to her goal of teaching prekindergarten to third grade, she will now transfer to OU-Tulsa to work on her bachelor’s degree.

Wachsmuth is the first person in her family to graduate from college, she said. And it was only possible because her education has been — and will continue to be — mostly debt-free.

Wachsmuth is one of a number of future early childhood educators across the Tulsa area who are earning college degrees while accumulating little to no student debt.

For many of them, it’s thanks to a couple of George Kaiser Family Foundation-supported programs: TCC’s Bridging the Gap scholarship program, which is funded by a GKFF grant, and the GKFF Loan Forgiveness Program.

Wachsmuth, who is among 60 new TCC graduates going into early childhood or elementary education, took advantage of Bridging the Gap to earn her associate’s degree.

Now a GKFF program loan will pay for her tuition, fees and books at OU-Tulsa. After she graduates, the loan will be reduced by 25% a year until it is erased, as long as she works full-time in a licensed early childhood education facility in Oklahoma.

A college degree “can seem so impossible when no one in your family has done it,” Wachsmuth said.

She originally started at TCC right out of high school, but juggling classes with working, soon she had to drop out.

Graduating last week from OU-Tulsa with her bachelor’s degree in early childhood education, she’s now ready to start work full time with Tulsa Educare in June. She recently wrapped up an internship there and will teach infants and toddlers.

Thanks to the GKFF scholarship and loan programs, “I have no debt,” said Lovell, 22. “I am beyond grateful and just so blessed.”

Lovell, whose mother teaches at Rogers High School, has known she wanted to be a teacher since she was 3 years old.

“But there’s no way I would be where I am without these programs,” she said.

Debbie Deibert, faculty and program coordinator for TCC Child Development and Education, said something she’s noticed about students in the program is that they all share “compassionate hearts for children and families.”

“They believe that teaching is a calling,” she said.

But just the thought of student debt can derail the dream, she added.

“With these programs, we can eliminate that barrier,” Deibert said.

She added that the number of early childhood and elementary education graduates at TCC has been holding steady for the last three years.

That’s good news in the face of the state’s ongoing teacher shortage.

By eliminating the financial barrier while fostering a culture of mentoring and support, “we are helping more young teachers navigate the college experience and reach their goals,” Deibert said.

It was during a difficult time for her family. In addition to the pandemic, her husband had been diagnosed with non-Hodgkins lymphoma.

“It felt like our whole world was turned upside down,” she said.

After overcoming her initial fear and enrolling at TCC, Wachsmuth was surprised by what she discovered: She excelled in college.

Able to take her classes online, she even earned All-Oklahoma Academic Team honors and was recognized at the state Capitol.

In addition to the TCC support system, her family has been behind her all the way, she said.

She and her husband have two daughters, ages 3 and 8.

“Everything I do is for my kids,” Wachsmuth said, adding that she’s thought, too, of the example she is setting for their futures.

“Now someone in our family is a college graduate; they see that it can be done,” she said.

For more information, visit tulsacc.edu/bridgingthegap. The deadline to apply for fall 2022 is June 1.

Tuesday night's unofficial returns indicate that Oklahoma Republican voters will need to go back to the polls in August to select their nominees for four statewide offices, including state superintendent.

David Chaney, Ben Harris and Josh Brock were arrested by the Oklahoma State Bureau of Investigation on Thursday morning. Prosecutors say they conspired in a complex “criminal enterprise” to unlawfully enrich themselves and conceal their scheme. #oklaed

Four candidates on the ballot for state superintendent primary

Republicans will have four state superintendent candidates to choose from for Tuesday’s primary election. #oklaed

Despite presidential action, summer feeding sites still have had to temporarily stop offering grab and go service until federal and state guidelines can be updated accordingly.

Stitt received $10,800 in Epic-connected campaign donations in his successful 2018 bid for governor, while Hofmeister reportedly accepted a total of $52,138 in successful 2014 and 2018 races for state superintendent. #oklaed

Without discussion or debate, the State Board of Education approved 419 emergency teaching certification applications at its Thursday meeting, including 231 renewals for the upcoming 2022-23 school year. #oklaed

Sunny Wachsmuth talks to her daughters before her graduation ceremony last Friday from Tulsa Community College. Wachsmuth, 31, earned an associate's degree and will now start at OU-Tulsa on her bachelor's in early childhood education.

Carissa Lovell, a Booker T. Washington High School graduate, is now a graduate of the University of Oklahoma-Tulsa, too. She went through college debt-free, earning a bachelor’s degree in early childhood education, thanks to George Kaiser Family Foundation scholarship and loan programs.