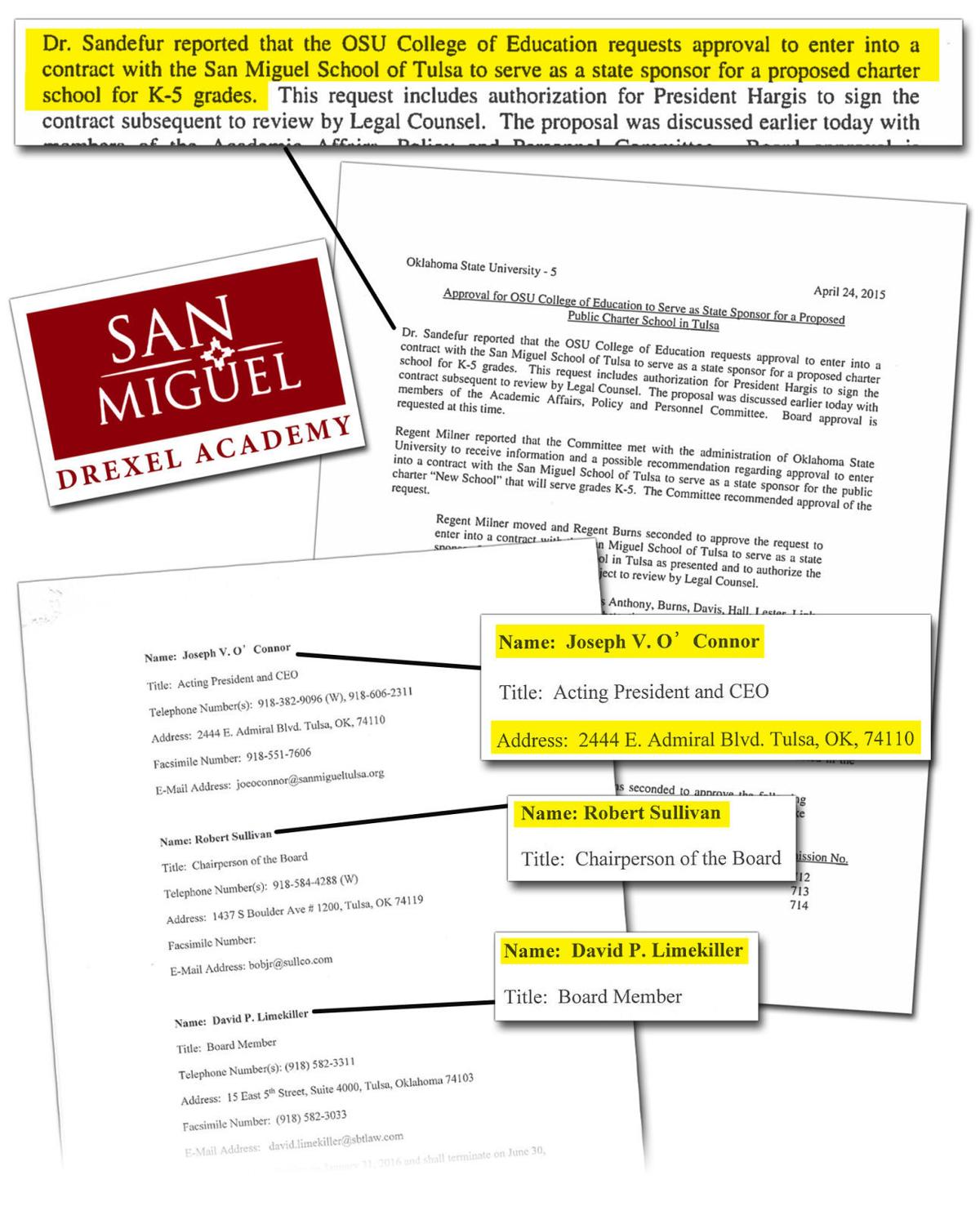 Minutes from an Oklahoma State University regents meeting (top) detail the OSU College of Education’s intent to enter into a contract with San Miguel School of Tulsa, a Catholic school, to form a charter school. At bottom, a page from the Drexel Academy charter contract lists board members for the new school who also serve in similar positions with San Miguel. The address listed for Drexel’s acting president, Joseph O’Connor, is the same as San Miguel School, where O’Connor also is president. Tulsa World illustration

Spokespeople for the proposed charter school said they dispute that there is any connection between San Miguel, a middle school, and Drexel, an elementary school named for the founder of downtown’s Holy Family Cathedral School, Saint Katharine Drexel.

But minutes from the April 2015 meeting of the regents for Oklahoma State University show that OSU’s College of Education sought and received approval “to enter into a contract with the San Miguel School of Tulsa to serve as a state sponsor for a proposed charter school for grades K-5.”

Additionally, it lists San Miguel board members Robert Sullivan and David Limekiller as Drexel’s board chairman and board member, respectively, and is signed by OSU President Burns Hargis.

Carrie Hulsey-Greene, public information officer at Oklahoma State University, said the minutes from the April 2015 regents meeting incorrectly listed San Miguel School of Tulsa as OSU’s partner in the contract. She said the document would be corrected, pending approval by the regents.

“We have not entered into an agreement with San Miguel; we are entering into an agreement with Drexel, which is a secular organization,” Hulsey-Greene said. “Oklahoma State University is looking into the affiliation that Drexel has or may have with San Miguel to make sure we are following the law. Our contract is with Drexel, and we will be correcting the error that was in our board minutes.”

The Tulsa Development Authority recently granted approval to Drexel Academy to use land across the street from Tulsa Public Schools’ Emerson Elementary School, which is at 909 N. Boston Ave.

Building schematics submitted for review by the authority in March include a red logo containing the names San Miguel and Drexel Academy and a cross.

Under the heading “Religious Affiliation,” San Miguel’s website states: “San Miguel is a Catholic, Lasallian School associated with the Brothers of the Christian Schools. San Miguel is organized ‘by Catholics,’ but not just ‘for Catholics.’ ”

She acknowledged that the two schools have O’Connor in common as president, plus two board members — Sullivan, president of Sullivan and Co., and Limekiller, an attorney with the Stuart, Biolchini & Turner Law Firm.

Beyond that, she said, San Miguel will serve as the “academic model” for Drexel Academy, and the two schools would use a “shared service entity that will allow some economy of scale with (the purchase of) supplies and that kind of thing.”

“There will be no religious education or religious oversight, no religious affiliation or Lasallian tradition (at Drexel),” Boudreau said.

She said Drexel will open in August for students in kindergarten through second grade and that organizers plan to expand the school gradually to serve students through the eighth grade.

She also said the charter school has not yet begun accepting students or promoting itself to parents as an educational choice because school leaders have not decided between the site controlled by the Tulsa Development Authority and another north Tulsa location.

O.C. Walker, executive director of the Tulsa Development Authority, said Drexel Academy obtained approval for a lease agreement in January and approval of building schematics in March for a vacant site on the northeast corner of Martin Luther King Jr. Boulevard and Jasper Street.

“That was approved for a two- to three-year period. After that, the school goes away and the land reverts back to its original state,” Walker said. “Not necessarily cleared out, but in essence — just to make sure the duties don’t overlap and that they’re not taking from the same population in the north Tulsa community. We didn’t want them duplicating efforts or student population because Emerson Elementary is set to undergo a big renovation.”

After the Tulsa World raised questions about the possible affiliation between San Miguel and Drexel schools, Limekiller, the attorney who serves on both boards, took over answering questions on the subject.

“I’m on the board of Drexel and San Miguel, and there was never any intention for San Miguel to enter into any agreement with Oklahoma State or any other entity to start a charter school. They had to misunderstand something,” he said, referring to the OSU Regents meeting minutes from April 2015. “If you look up Drexel Academy Inc., it’s its own entity.”

Asked when Drexel was incorporated, Limekiller looked through documents and responded that it was July 1, 2015 — more than two months after OSU approved a charter school sponsorship deal with San Miguel School of Tulsa.

“Our intent was always to set up a new company and nothing to do with San Miguel. There are common board members, but it is a distinct legal entity,” Limekiller said when asked about the disparity.

He said he wasn’t aware of the school’s namesake, Saint Katharine Drexel, who founded 130 schools for Native Americans and African-Americans, including Holy Family Cathedral School and 18 others in Oklahoma.

“I voted for it, but I didn’t know where it came from. I guess you have better resources than I do,” Limekiller said.

He then questioned the Tulsa World’s scrutiny of the possible connection between a private Catholic school and a proposed charter school.

“Did you look at the contract? Does that change your mind?” he asked. “Did you know this type of arrangement, for lack of a better word, is done in Chicago and Milwaukee?”

Steffie Corcoran, spokeswoman for the Oklahoma State Department of Education, said Drexel has not yet cleared the state’s hurdles to be recognized as a charter school in order to receive public funding.

“We just received their application last week, and the legal review and due diligence that is done for all charter applications is in the very early stages,” Corcoran said. “There has been absolutely no disbursement of funds to Drexel Academy.”

The surge virtual charter school enrollment is said to be a big factor. “I think we’re facing a real shock to the system. Tulsa Public Schools is going to lose thousands of students this year," said a legislator and former TPS teacher.

The closures are blamed on worsening transmission rates in the community as well as quarantines among support staff, bus drivers and other essential workers.

Epic Charter Schools fallout: Governor says he will work with lawmakers who want audit of Oklahoma Department of Education

A group of Republican lawmakers — 11 state representatives and 11 state senators — issued a joint statement Wednesday calling on Gov. Kevin Stitt to request an investigative audit of the state Education Department to determine the full extent and impact of its potential failure to ensure compliance with the Oklahoma Cost Accounting System for public schools.

General Counsel Brad Clark on Thursday presented to the board records he said showed a years-long history of Epic’s “nonresponsiveness and noncompliance” with state Department of Education requests for information about its use of taxpayer dollars — and new deficiencies discovered in reviews of Epic’s federally funded programs for special education and homeless students and English learners.

Elementary students in fourth, fifth and sixth grades previously were scheduled to return to school Nov. 30.

Districts are suffering from a glaring absence of bus drivers and substitute teachers this school year as COVID-19 infection rates worsen across the Tulsa metro.

Minutes from an Oklahoma State University regents meeting (top) detail the OSU College of Education’s intent to enter into a contract with San Miguel School of Tulsa, a Catholic school, to form a charter school. At bottom, a page from the Drexel Academy charter contract lists board members for the new school who also serve in similar positions with San Miguel. The address listed for Drexel’s acting president, Joseph O’Connor, is the same as San Miguel School, where O’Connor also is president. Tulsa World illustration