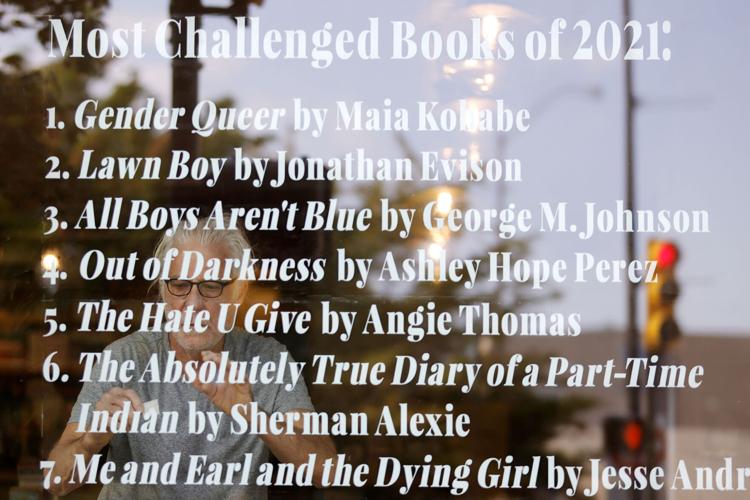 Hank Barton places a decal of the most challenged books of 2021 on the window of Magic City Books in downtown Tulsa. Observed annually in September, Banned Books Week highlights current and historical attempts to censor books in schools and libraries. 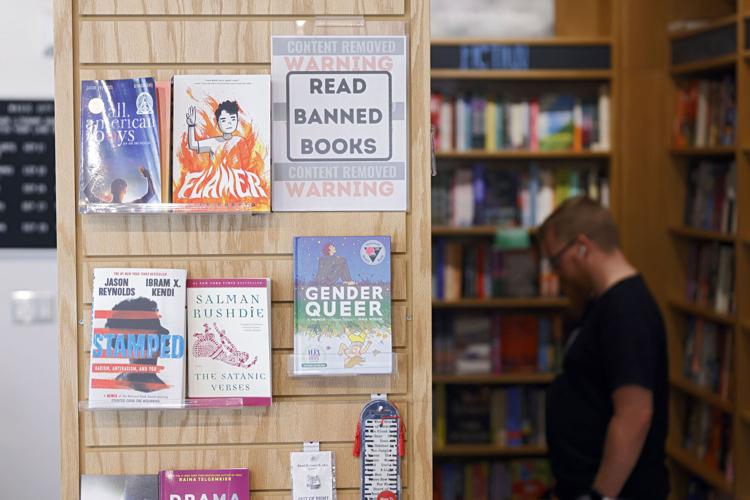 Magic City Books in Tulsa displays books that have been challenged ahead of Banned Books Week. 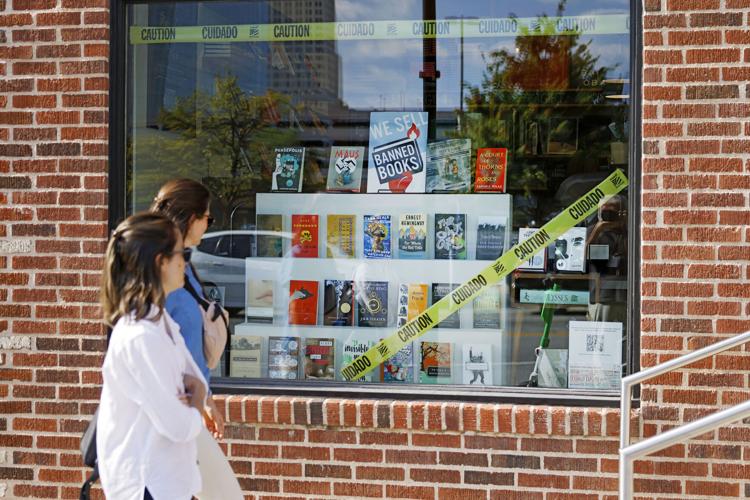 People notice a banned-books display in the window of Magic City Books in downtown Tulsa on Friday.

With an increase in book challenges nationwide, Banned Books Week is hitting some people a little differently this year.

“It’s our role to provide everything,” Tulsa City-County Library Senior Director of Customer Experience Sue Anderson said. “All sides. It really is, and we’re better off for it.

“Banning books is un-American, and it’s really not what we’re about as a democracy.

“An informed populace is the best thing in a democracy, so having unpopular things, … we need to have everything so we can provide that.”

Observed annually in September, Banned Books Week highlights current and historical attempts to censor books in schools and libraries. It was launched in 1982 in light of a U.S. Supreme Court ruling barring school officials from banning books from campuses simply because of their content.

Banned Books Week is organized nationally by a coalition of 14 organizations, including the American Library Association, the American Booksellers Association, the National Coalition Against Censorship, the Comic Book Defense Fund and the Foundation for Individual Rights in Education. The 2022 edition runs through Saturday.

In advance of Banned Books Week, the American Library Association released preliminary information Friday about the number of documented attempts to ban or limit book access across the country.

Through Aug. 31, 681 challenges have been filed nationwide to ban or restrict library resources in 2022 alone, targeting 1,651 individual titles. More than 70% of those challenges sought to restrict access or completely remove multiple titles.

That figure includes both of the challenges filed earlier this year with Bixby Public Schools over the high school library’s inclusion of “13 Reasons Why” and “Me and Earl and the Dying Girl,” as well as Tulsa Public Schools for having copies of “Gender Queer” and “Flamer” available at some of its secondary campuses.

By comparison, 729 challenges were filed nationwide in all of 2021, targeting 1,597 library, school and university books — the most since the ALA started actively tracking book challenges in 2001.

Lessa Kananiʻopua Pelayo-Lozada, the ALA’s 2022-23 president, said a disproportionate number of the titles being challenged nationwide in 2021 were either written by authors who are Black, Indigenous or LGBTQ or focus primarily on characters who identify with at least one of those minorities.

“What we are trained to do as librarians is to provide information and access for everyone in the community,” she said. “We are also trained to respect and help parents make the right choices for their families.

“Parents have every right to make the choice for themselves, but they do not have the right to make that choice for other people’s families. What we know is that having access to information — simply having that access — does not change one’s ideology or one’s mind. What it does do is allow those who need it to be able to access it.”

Facilitating that access has been critical for Anderson and her colleagues at the Tulsa City-County Library.

Although neither Anderson nor Chief Operating Officer Kiley Roberson could speak to specific titles, such as the four at the center of the challenges at Bixby and Tulsa public schools, both said it is not uncommon for that to yield a spike in interest among patrons.

As of the close of business Friday, two copies of “Flamer” were available for checkout through the TCCL system, with additional copies on order. The other three titles subjected to challenges in Tulsa or Bixby each had a waiting list.

“Any time a specific title or genre is called out in the media or by an elected official or on social media, we do see an uptick in hold requests or check-outs for those materials,” she said.

However, despite the challenges filed with the two area school districts, the Tulsa City-County Library has not had an increase in requests to review or remove items from its collection. TCCL does have a process for reviewing titles’ inclusion in its collection, including a form that asks complaining patrons to specifically list what they find objectionable about a book, what page number the objectionable material is on and whether they have actually read the title in question.

“If there’s one word in it that is not acceptable to some audiences, that does not exclude that book from our collection because of that one word.”

4. "Out of Darkness" by Ashley Hope Perez

6. "The Absolutely True Diary of a Part-Time Indian" by Sherman Alexie

7. "Me and Earl and the Dying Girl" by Jesse Andrews

8. "The Bluest Eye" by Toni Morrison

10. "Beyond Magenta" by Susan Kuklin

School leaders at three Tulsa Public Schools campuses attribute staff efforts to support students beyond the basics as part of the reason for their schools' improved state test scores. #oklaed

Tulsa elementary prioritizes health, fitness: 'It's part of who we are'

In the fight against childhood obesity, it's no mystery that what happens at school is key. And in Tulsa, no one has embraced that idea quite like the students and staff at Eliot.

More than 20 TPS sites had at least one grade post a double-digit increase from 2021 in the percentage of students scoring at a proficient or advanced level in a state test subject. #oklaed

Tulsa Public Schools getting little feedback on board redistricting

The new school will offer bachelor's and graduate degrees focused on innovation and advanced technology.

Ukrainians on annexations: 'What is happening is lawless'

Kissinger: In a way, Russia's already lost the war

Kissinger: In a way, Russia's already lost the war

Hank Barton places a decal of the most challenged books of 2021 on the window of Magic City Books in downtown Tulsa. Observed annually in September, Banned Books Week highlights current and historical attempts to censor books in schools and libraries.

Magic City Books in Tulsa displays books that have been challenged ahead of Banned Books Week.

People notice a banned-books display in the window of Magic City Books in downtown Tulsa on Friday.