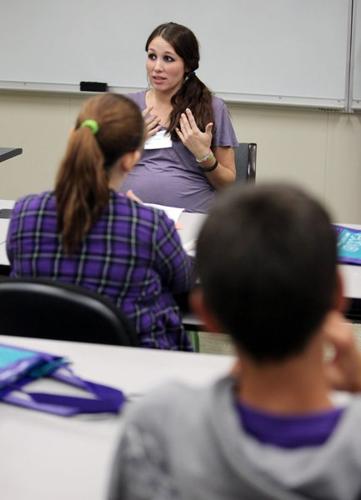 By the end of the small-group session, it was apparent that all 15 teenagers in the room had been affected in some way by alcohol or drug use, either by abusing substances themselves or by watching friends or family members struggle with addiction.

Stories about peer pressure, loneliness, depression, experimentation, family history of addiction, and even rape and suicide attempts were talked about without fear of judgment Tuesday during Tulsa Community College's Teen Recovery Day.

More than 100 teenagers from high schools and recovery programs across the state were at TCC's Northeast Campus for the event that included group discussions and activities such as an art project, prevention workshops and presentations by Alateen, a part of Al-Anon, and the Oklahoma Bureau of Narcotics and Dangerous Drugs Control.

According to the Oklahoma Department of Mental Health and Substance Abuse Services, nearly 6 percent of Oklahoma teenagers - or about 20,000 - are in need of treatment for alcohol or drug addiction.

"It's a pretty widespread issue," said Sharolyn Wallace, associate professor of human services at TCC and director of the school's Center for Addiction Prevention Recovery Support.

Becca Sullivan, a TCC student and member of the school's support group, opened one of the small-group sessions by telling her own story of drinking alcohol and experimenting with drugs as a teenager and about how she fought her addiction.

"Everything I did that felt good for a second ... became a nightmare," she said. "I felt hopeless. I was worse than dead. I was spiritually dead."

Sullivan said she started drinking and doing drugs to fit in and that it wasn't until she feared losing her children that she decided to seek help.

"The threat of (the Department of Human Services) knocking on my door is what got me to quit," she said, but she added that she doesn't regret battling addiction.

"I don't think I'd be as grateful if I hadn't gone through that hell."

Sullivan said she has been in recovery for two years and is taking classes at TCC in hopes of going into counseling.

Wallace said TCC is one of the few schools in the country to have a collegiate recovery center. The center was started about five years ago with only five students and has grown to 35 members.

It serves as a group support system that helps students navigate recovery and school work at the same time and also offers tutoring and one-on-one support.

Most students in the group receive funds for school from the Recovery Scholarship, a program for students who are recovering from alcohol or drug addiction, Wallace said.

The privately funded scholarship program is especially helpful for students who are ineligible for federal financial aid because of a drug- or alcohol-related conviction.

"We decided to host this Teen Recovery Day to help kids know that if they wanted to go to college, there's a place to go," she said. "Students see there's a whole lot of people to support them."

Hearing stories from Sullivan and her peers made one student who attended the event - a junior at Street School - question her actions.

"I used to do pills and drink a lot and smoke marijuana," she said, adding that she still does occasionally.

But listening to her peers talk about their struggles and accomplishments with sobriety really had her thinking.

"It was inspiring," she said. "I have the power to do it. It makes me want to quit."

School leaders at three Tulsa Public Schools campuses attribute staff efforts to support students beyond the basics as part of the reason for their schools' improved state test scores. #oklaed

The number of Oklahoma public school students taking an Indigenous language has increased by almost 1,000 pupils over the last two school years, according to data compiled by the Oklahoma Advisory Council on Indian Education. #oklaed

The new school will offer bachelor's and graduate degrees focused on innovation and advanced technology.

More than 20 TPS sites had at least one grade post a double-digit increase from 2021 in the percentage of students scoring at a proficient or advanced level in a state test subject. #oklaed

Jenks High School has 21 students, the most of any area district, who will be in the running for the 7,500 National Merit scholarships worth about $30 million, to be awarded in spring 2023.