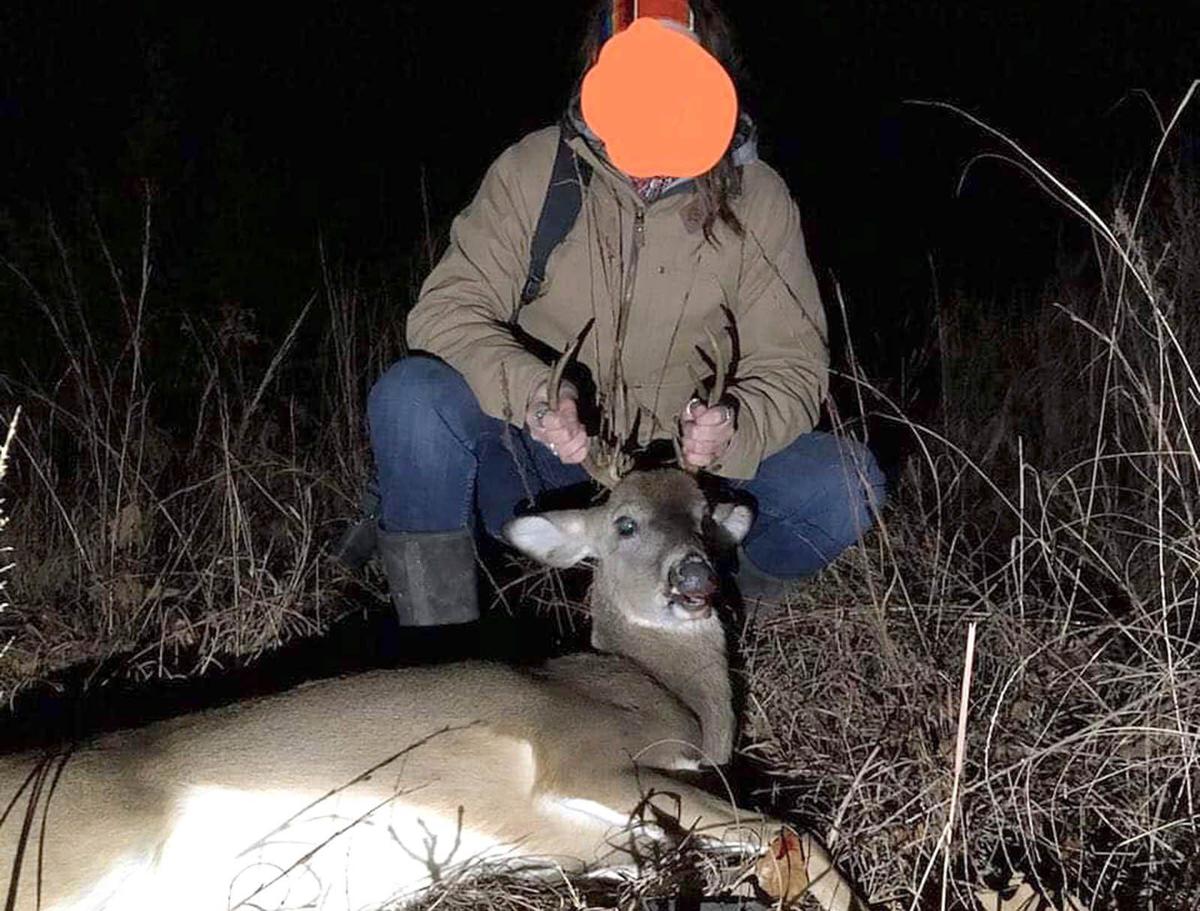 Oklahoma Department of Wildlife Conservation Game Wardens are protecting the identity of the McIntosh County woman whose first deer was spotlighted and shot with a rifle out-of-season. COURTESY/ODWC

The Oklahoma Wildlife Department Conservation Game Wardens shared on Facebook the chat between a warden and the woman on the dating app. COURTESY/ODWC

“Cuffing season” took on a whole new definition for a McIntosh County woman who shared her excitement on a dating app about shooting a “bigo buck” and ended up being saddled with a big ol’ fine.

The woman, whose name has been withheld by Oklahoma Department of Wildlife Conservation Game Wardens, shared her excitement at shooting her first deer with a potential beau on her dating app.

The problem was the deer was killed illegally, and the man she was connecting with was a state game warden.

For those who don’t know, cuffing season is a slang dating term for the time of year — fall and winter — when people normally prone to independence feel a need to be tied down, or cuffed, romantically.

In this case, the deer was shot with a rifle outside of rifle season, apparently shot at night with aid of a spotlight and only the head and back-strap meat were harvested; all illegal acts.

“It definitely was a shock,” said Cannon Harrison, a McIntosh County warden who has been an Oklahoma Game Warden for two years and was chatting with the woman.

“First you think, ‘This isn’t real,’ ” he said. “You think, ‘Maybe she knows who I am and is teasing me,’ but we did some digging on who she was and where she lived and it went from there.”

The incident happened more than a month ago, Harrison said, but was posted to the Oklahoma Game Wardens Facebook page on Sunday night, much to the delight of commenters who broke into strings of pun-filled banter about deer parts and shared the post more than 1,300 times by noon Monday.

It was funny, in a sad way, and it was probably a dating-app first. As one Facebook commenter noted, “only in Oklahoma.”

“I’ve spoken with several wardens across the nation, and this seems to be the first of its kind,” Harrison said.

“You can’t just ignore a broken law that falls right in your lap but was kind of a bummer,” he said. “She said it was her first deer ever, too.”

The woman and an accomplice face $2,400 in fines for the kill on charges of improper possession of an illegally taken animal and taking game out-of-season. Wanton waste of the meat and spotlighting charges were not added. The woman pleaded out immediately, he said.

Social media has proved to be a windfall for game wardens in recent years, taking the backroom bragging that used to take place at country cafes and bars out to the internet.

“We’re reaching a day when everyone wants to talk and brag on social media, and it’s a great way to catch these individuals if you know how to use it,” he said.

“Social media in general is working very well, whether it’s put on there by the person who has done it or someone who knows the person and tells about it, we might make two or three cases, statewide, because of social media,” said Bill Hale, Law Enforcement Division chief.

“A case like this, on a dating app, probably won’t happen again,” he added. “A person connecting on a dating app that happens to be a violator in the process of a violation and it happens that other person is a game warden? The odds of that happening are probably less than winning the lottery.”

An incognito approach works for game wardens in person and has worked well for years. Social media just makes the crowd bigger.

“You never know who you’re talking to,” Harrison said. “We try not to stick out and sometimes that works for us. People just tell us what they do.”

Oklahoma has a healthy deer population, and the 2018 deer season has been a banner year with more than 104,000 deer checked online as of Monday, indicating what likely will be the highest harvest in years when all hunts are totaled. The 2017 harvest was 107,914.

Oklahoma Department of Wildlife Conservation Game Wardens are protecting the identity of the McIntosh County woman whose first deer was spotlighted and shot with a rifle out-of-season. COURTESY/ODWC

The Oklahoma Wildlife Department Conservation Game Wardens shared on Facebook the chat between a warden and the woman on the dating app. COURTESY/ODWC