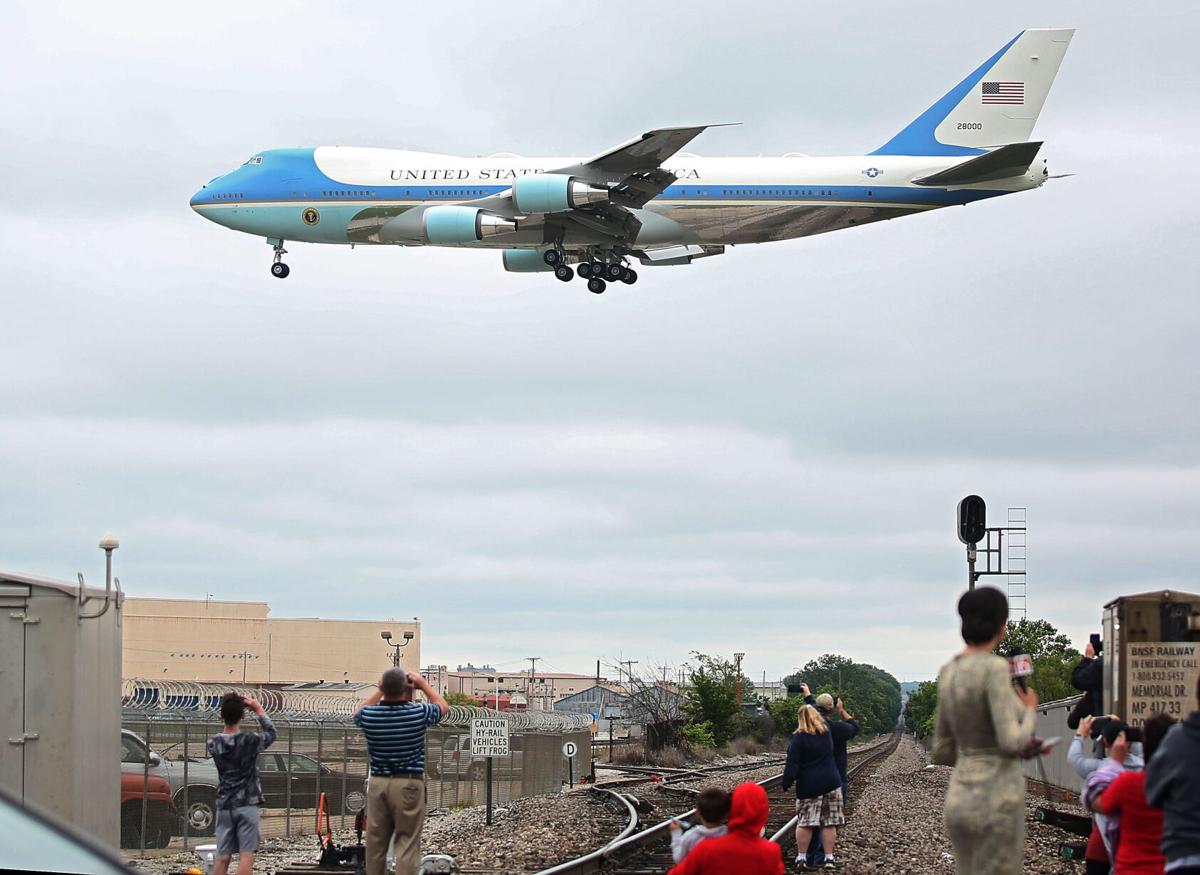 Air Force One, carrying President Joe Biden, flies over spectators as it lands at Tulsa International Airport on Tuesday. 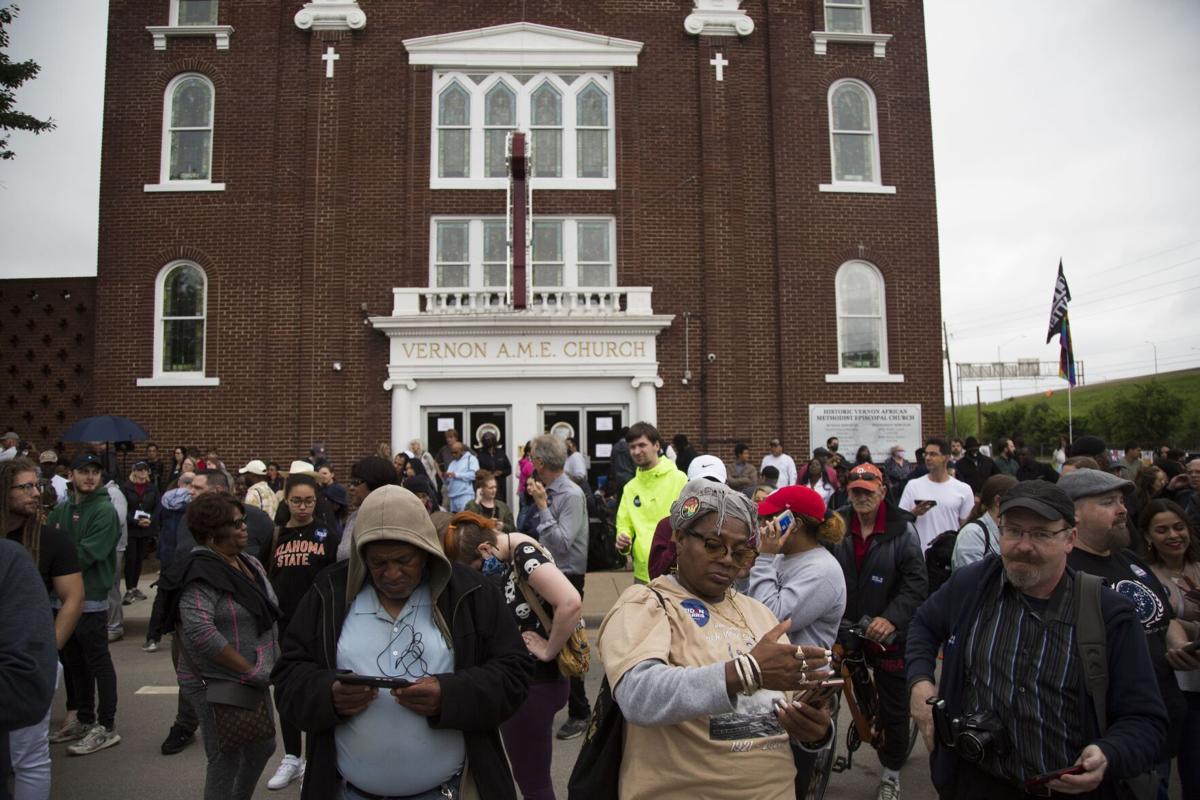 Onlookers watch President Biden's speech on their cellphones. This was the only glimpse they got as the president did not greet the public. 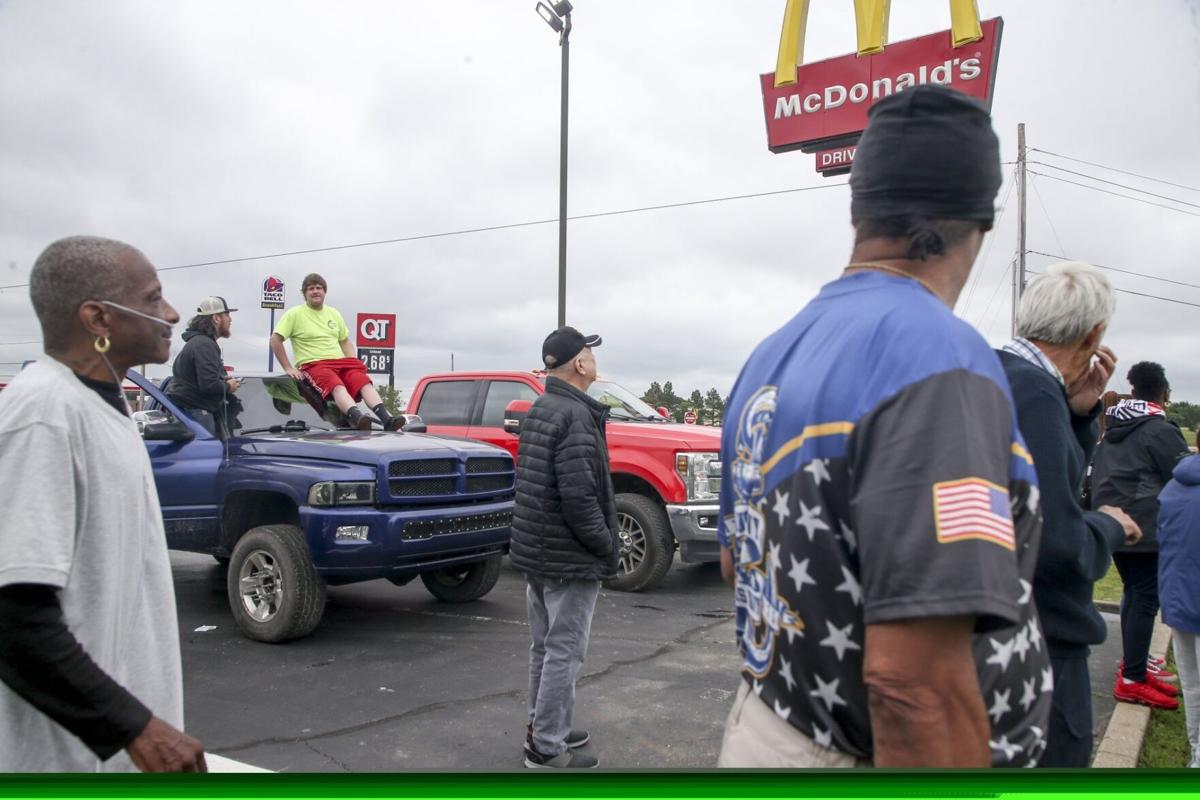 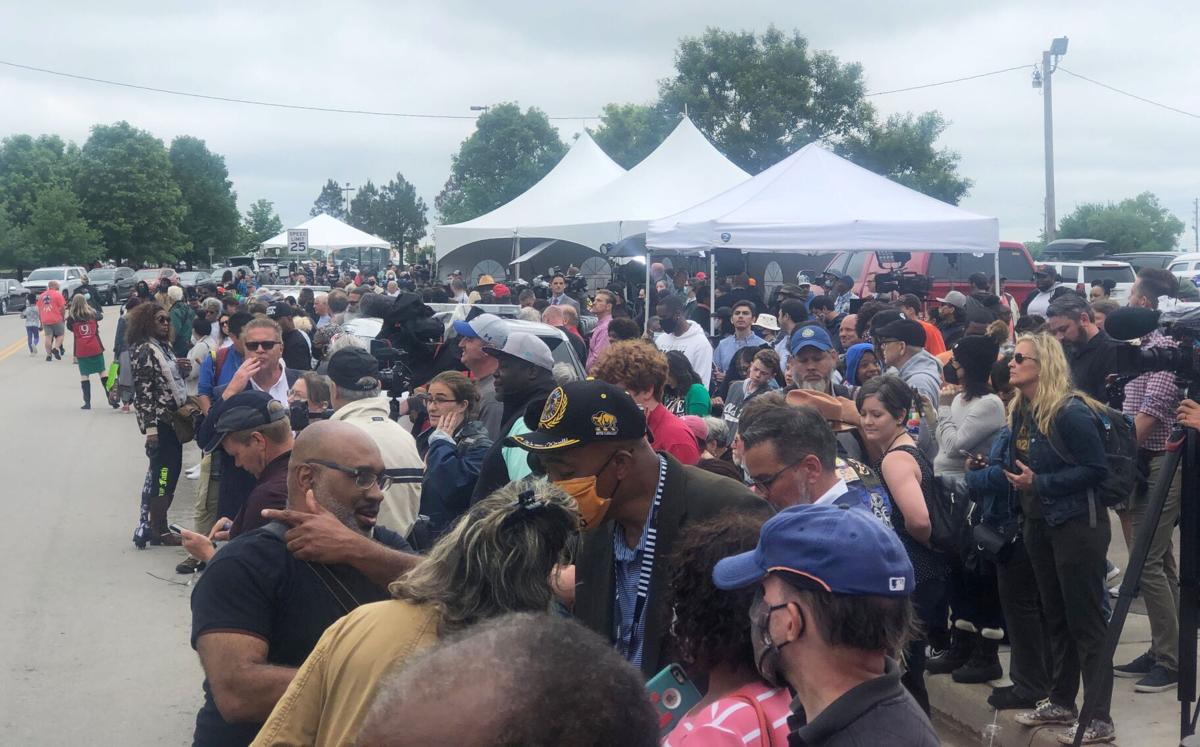 Crowds gather near the Greenwood Cultural Center for the arrival of President Joe Biden on Tuesday. 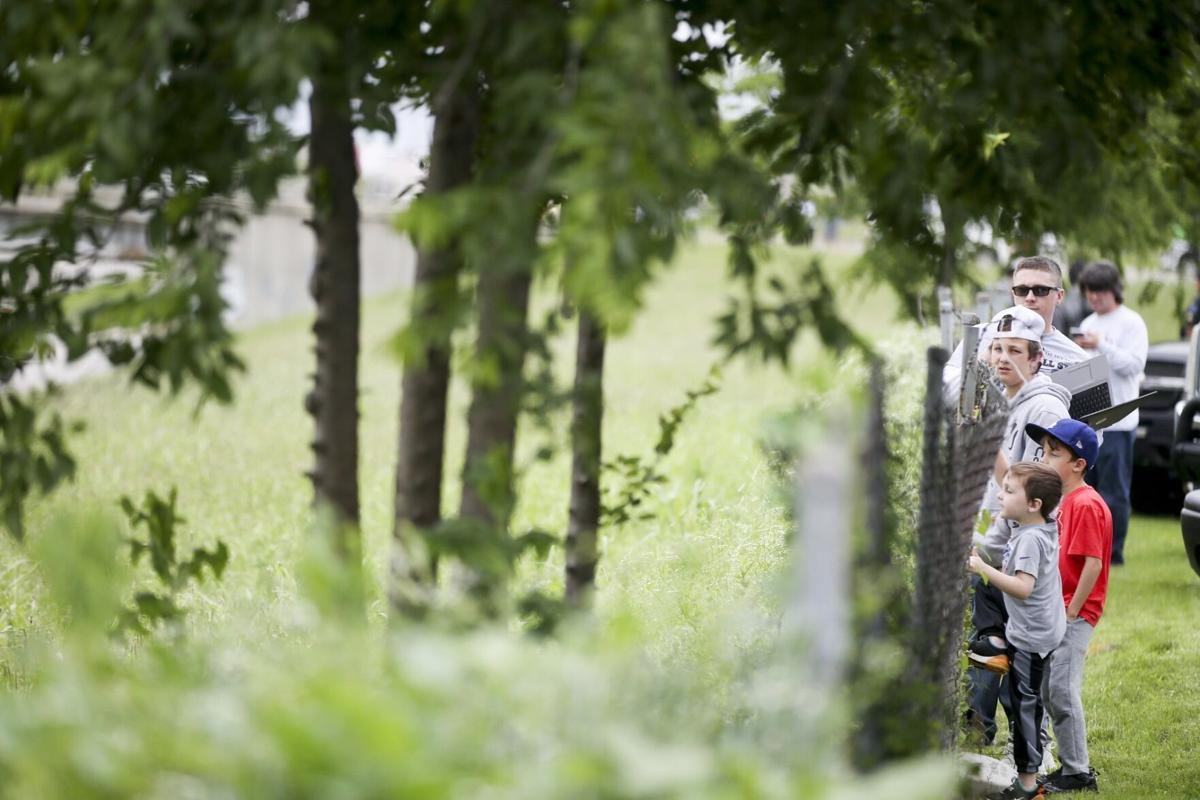 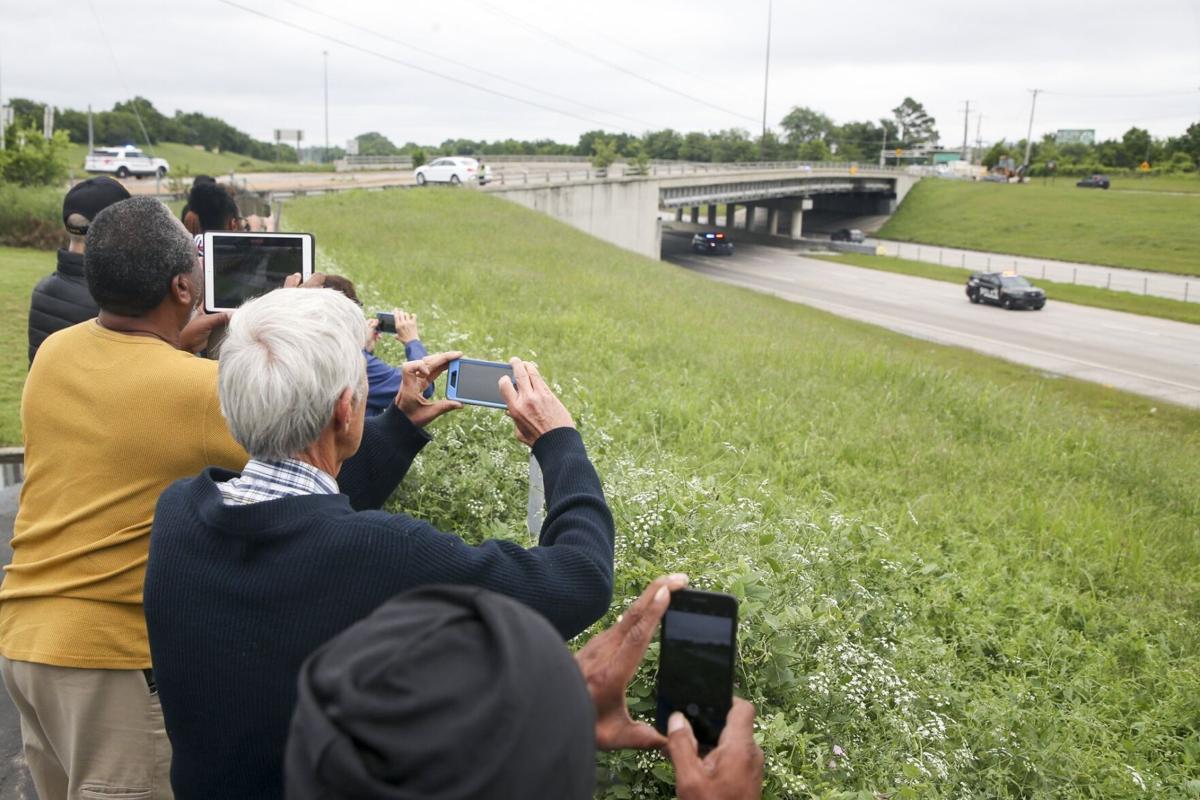 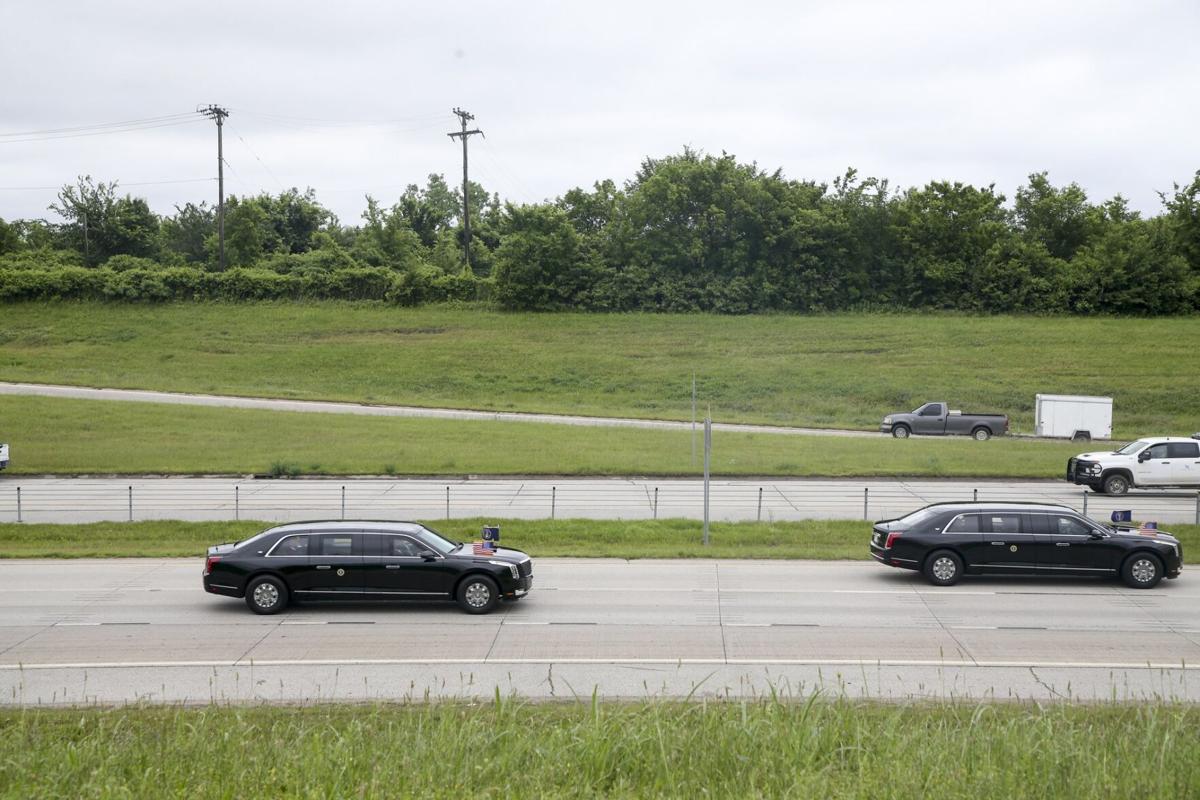 Erma Matthews may not have laid eyes on President Joe Biden on Tuesday, but what he came to Tulsa to say was music to her ears.

“At least now, nobody can say they didn’t know!” she exclaimed after watching the president’s remarks by livestream on a cellphone, as she stood on the front steps of the Vernon AME Church. “This is the memory my great-grandmother never got.”

Matthews, the descendant of Tulsa Race Massacre survivor Fannie Rose Jackson, was among the crowd of several hundred people gathered about 50 yards from where Biden delivered his remarks to a select few inside the Greenwood Cultural Center.

Amid security concerns, the president used an out-of-view back entrance into the building.

The occasion brought with it a flood of memories of her great-grandmother, who died in 1992 at the age of 92, and along with those remembrances, a few different emotions.

“My great-grandmother — I still miss her,” Matthews said, her eyes welling with tears. “She owned two homes on Oklahoma Street. One was her home, one was a rental, all on her salary as a domestic worker. And they were traumatized, plain and simple. Now we know that’s the word for it. She did all of that in spite of it.

Matthews held her cellphone close up to one ear so she could hear Biden’s every word, as her adult daughter Jennifer Matthews held her own phone in the palm of her hands so they could both see him speak.

“The fact that the president of the United States showed up — it’s important,” said Erma Matthews. “It’s what we’ve always known in our community, but now the whole world knows.”

Media crews and other spectators began gathering along Greenwood Avenue about 10 a.m.

Latesha Edwards’ life-size cutout of President Biden was the next-best-thing for the patient group gathered in front of and along both sides of Vernon AME Church.

“We like the fact that he is wanting to be president for everyone and not just one certain base or group of people,” Edwards said.

Edwards’ husband, Billy Edwards, is a Biden fan as well.

“He seems to be in touch with those of us who are not as fortunate in our country right now,” Billy Edwards said. “That’s very important to understand that everybody is not doing well all the time.”

Up the street a hundred feet, Oologah resident Elizabeth Brewer was not as enamored with the president.

“I absolutely, 100% believe he is exploiting this situation for his own agenda,” Brewer said.

Quite a few among the crowd came from out of state for centennial commemoration events.

After it became apparent that Biden would not be visible to those waiting in the street, some spectators left Greenwood.

“We hoped we could see the president. I guess we’ll head back to our hotel,“ sighed Alma Brown, one of about 45 members of the Underground Railroad Re-Run, a nonprofit organization with members in Mississippi, Georgia and Louisiana that raises funds for college scholarships through annual, educational motorcycle runs. “Every year we do a mission, and this year, it was coming here to learn about Black Wall Street.”

Brian McClain, 24, said he made the trip from Washington, D.C.

“There was just something compelling knowing this was the centennial,” McClain said. “Mostly I wanted to pay my respects and just kind of contemplate the loss here and the hope I see the community striving for.”

Earlier outside Tulsa International Airport, people who parked along the sides of Memorial Drive within view of the runway did not leave disappointed.

While waiting for the real thing to land, 5-year-old Eli Williams played with his toy version of Air Force One, making perfect figure-eights in the air above his head.

John and Eli, both of Tulsa, were among dozens of onlookers on hand outside the airport, where Air Force One touched down at around 1:10 p.m.

Alvin and Alycia Williams had one of the better seats. The Tulsa couple climbed into the bed of their pickup, where they had a good view as the plane descended.

They were on hand last year when Air Force One brought then-President Trump to Tulsa.

“We saw that big plane fly in right here,” he said. “Now we get a chance to see Joe Biden.”

Tiffany Ofield drove in from near Jay with her children, Kayzelynn, 3, and Leland, 5 months. They were accompanied by her parents, Tom and Norma Ofield, also from the Jay area.

“My parents got to come for Trump, but we didn’t. I didn’t want to miss it this time,” said Tiffany, who brought her Canon camera.

Tiffany said she knows the children won’t remember the event, but “I’ll always be able to tell them they’ve seen the president. Or the plane, at least.”

Families of 9 killed in SC church settle with feds

Families of 9 killed in SC church settle with feds

Air Force One, carrying President Joe Biden, flies over spectators as it lands at Tulsa International Airport on Tuesday.

Onlookers watch President Biden's speech on their cellphones. This was the only glimpse they got as the president did not greet the public.

Crowds gather near the Greenwood Cultural Center for the arrival of President Joe Biden on Tuesday.