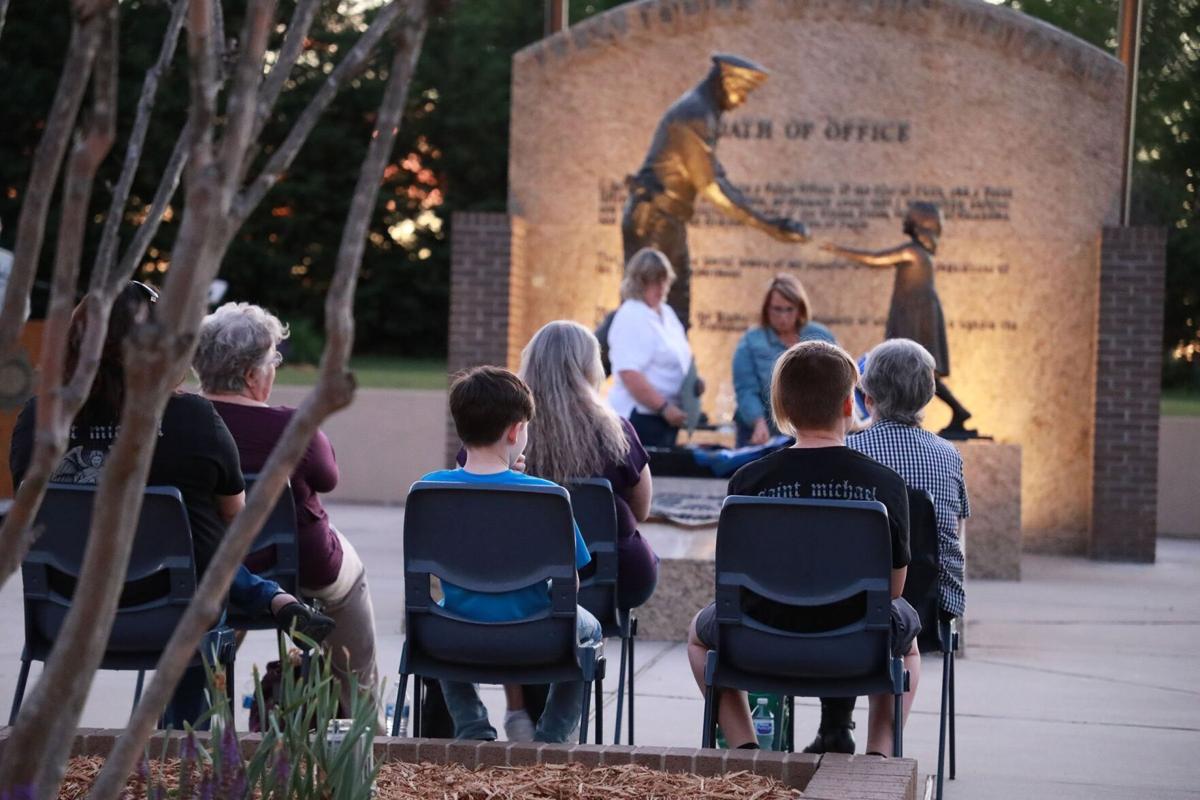 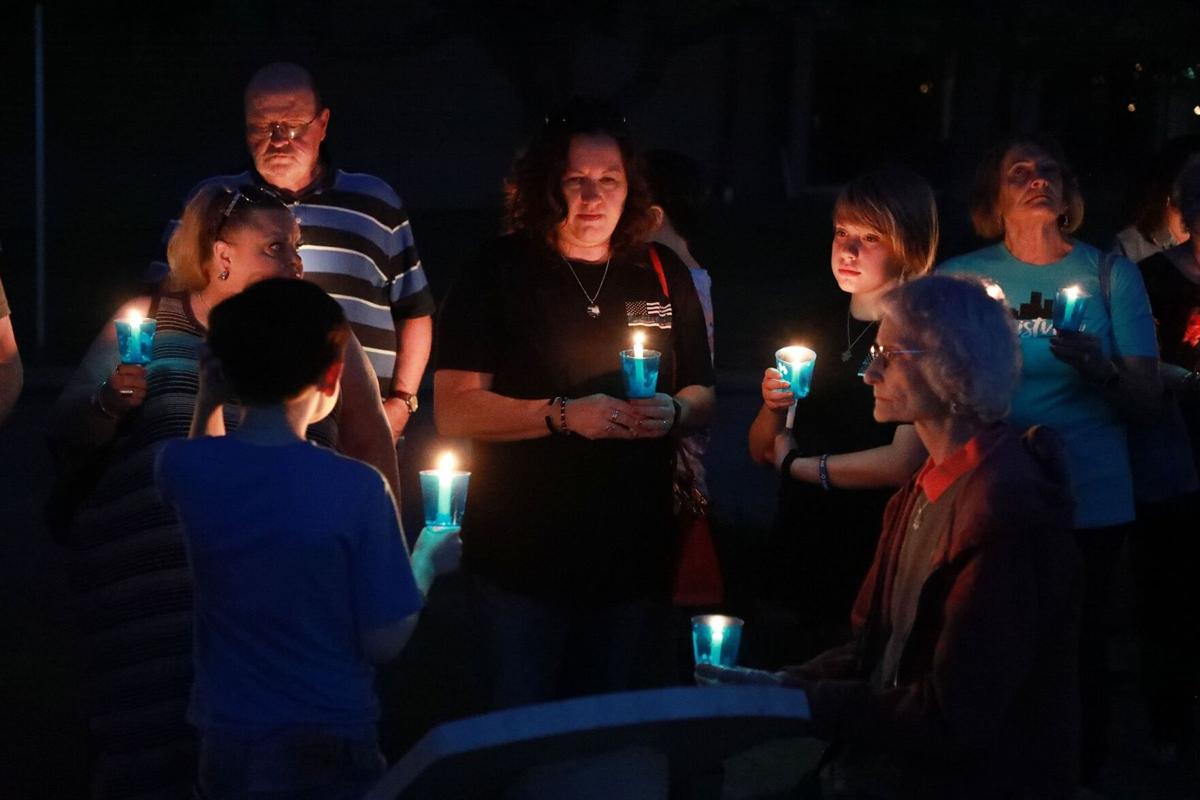 Kristi Johnson and her family members stand at the memorial of her late husband, Sgt. Craig Johnson, during the Tulsa Police Officers’ Memorial annual candlelight vigil on the grounds of the Tulsa Police Academy on Friday night. 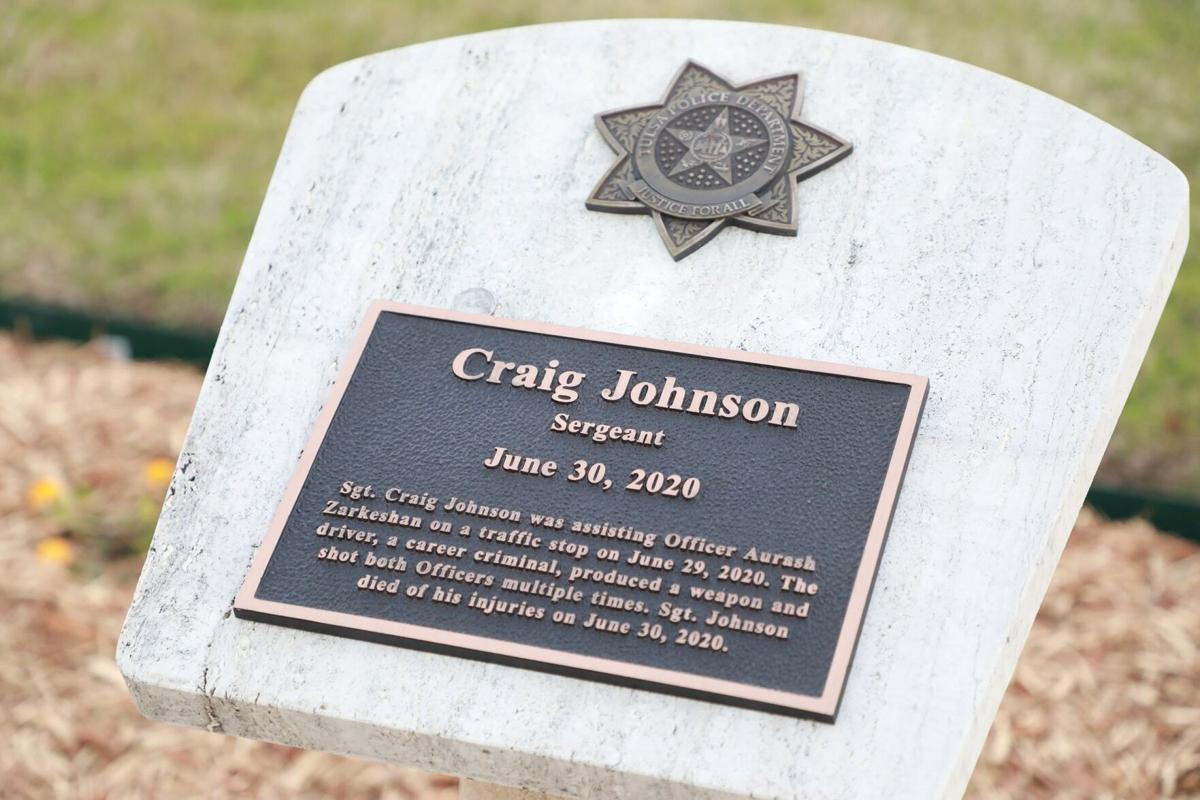 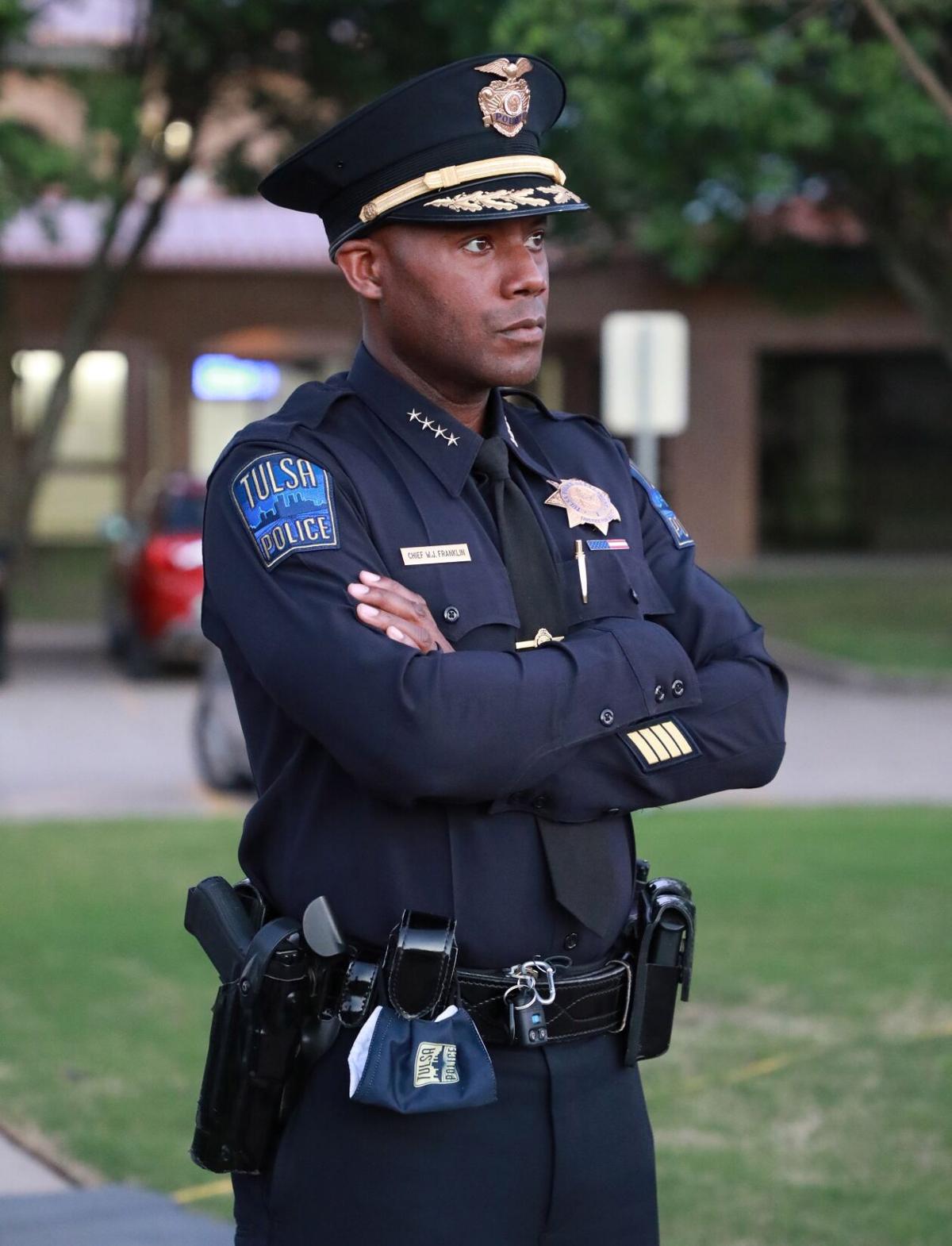 The 41 Tulsa police officers who have been killed in the line of duty or to a pandemic since 1917 were honored with a candlelight vigil Friday night.

For the first time in 24 years, two new names were read at the vigil: Craig Johnson, who was killed in June 2020 during what started as a “routine” traffic stop, and Jerad Lindsey, who died November 2020 due to COVID-19.

On Saturday morning, a memorial service will also honor the officers.

“Nothing is ever routine in the life of a police officer,” Thomas Branch, pastor of Belview Baptist Church, said at the vigil. “Nothing is ever common. Nothing is ever sure, except for this: We call; they come. We scream and they answer, and they know full well the consequences that may well await them.”

Branch said Tulsa’s residents must remember the officers who serve them and never forget the sacrifices of the ones who died while serving.

During the vigil a candle was lit for every fallen officer as their names were called, and Branch said even the ones who died more than 100 years ago will be remembered for their service.

Until last year, the Tulsa Police Department had gone 24 years without losing an officer in the line of duty. It was the longest stretch in Tulsa history.

Tulsa Police Chief Wendell Franklin said it was a difficult to have two new officers added to the Tulsa Police Officers’ Memorial.

“When sworn into office, we take an oath, and part of the oath is to protect with our lives if need be,” Franklin said.

“One died at the hand of another individual, and the other because of the pandemic.

“When sworn into office, every officer takes an oath vowing to ‘protect the rights, lives and property of all citizens and uphold the honor of the police profession, with my life, if need be,’” the Tulsa Police Department said of the fallen officers in a press release.

“Those 41 officers kept their word and gave their lives to protect the citizens of Tulsa, and their sacrifice will never be forgotten.”

Six girls and women have disclosed abuse or knowledge of abuse to detectives since the investigation began, a court affidavit details. All victims were in their early teens at the time, and most were athletes.

The defendants were charged as a result of the four-month undercover Operation Clean Sweep initiated in December in the federal Northern District of Oklahoma, where the U.S. Attorney's Office partnered with more than a dozen local, state, tribal and federal law enforcement agencies to protect children from predators.

Kenneth Ray Smith is in custody in lieu of $1 million bond in connection with allegations that he killed Tyris Boyd on Sept. 7 by shooting him multiple times during a Labor Day barbecue in Creek County.

One of two men who have been charged in federal court in a May 8 attempted carjacking and shooting was previously questioned about a double homicide in Broken Arrow.

"Any opportunity that we have to expand our training capabilities, we are going to accept those opportunities," Tulsa Police Chief Wendell Franklin said. "That's what we want. We need that."

The shooter stayed at the scene and talked to police when they arrived outside Jerrod’s Grocery on 36th Street North near Hartford Avenue, said Lt. Brandon Watkins of the Homicide Unit.

Devon Laws, who lives in the 800 block of Northwest Lupa Street, was arrested on a shooting with intent to kill complaint, said Bartlesville Police Capt. Jay Hastings.

Kristi Johnson and her family members stand at the memorial of her late husband, Sgt. Craig Johnson, during the Tulsa Police Officers’ Memorial annual candlelight vigil on the grounds of the Tulsa Police Academy on Friday night.