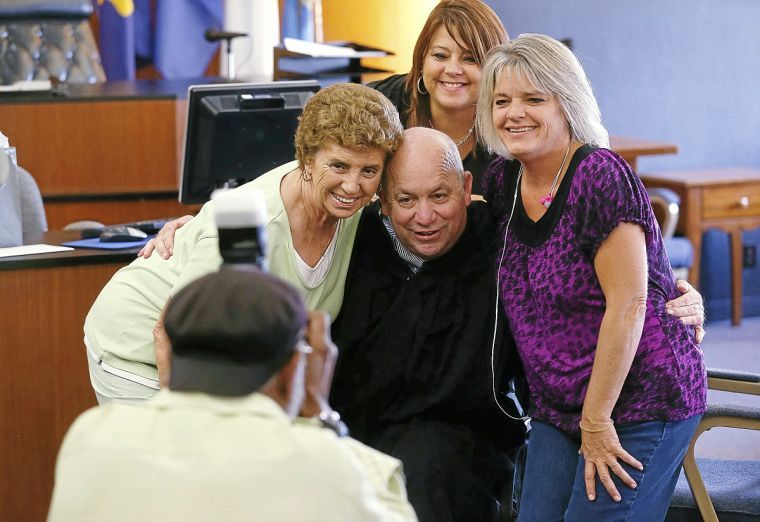 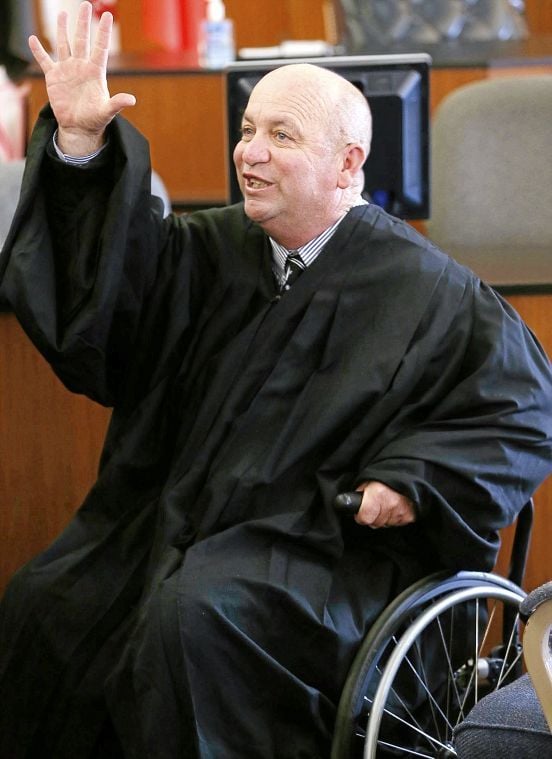 New Tulsa County Special Judge James Keeley waves at a friend while greeting guests after being sworn in at the Tulsa County Courthouse on Friday. JAMES GIBBARD/Tulsa World 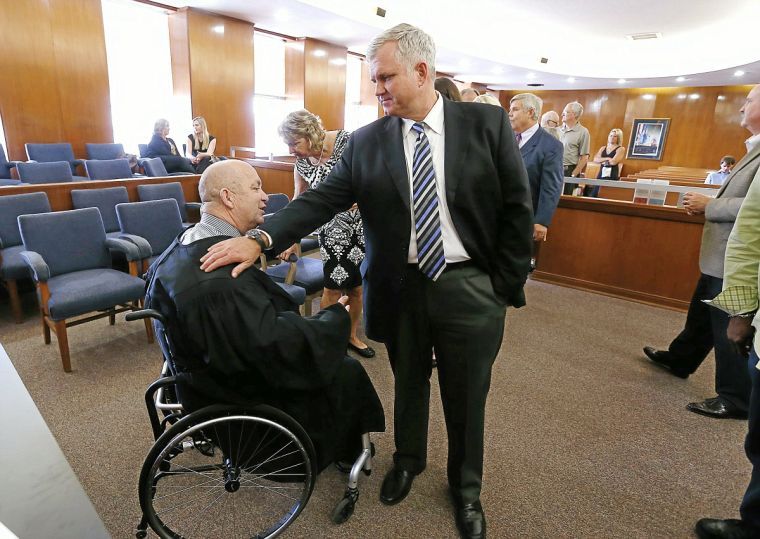 Special Judge James W. Keeley’s first order of business after his formal swearing-in ceremony Friday was to bang his gavel.

“I always wanted to do that,” the 57-year-old Tulsan said with a smile.

Keeley was appointed a Tulsa County special judge in July and has been assigned to a family law docket.

He practiced law for 32 years and specialized in bankruptcy and other financial matters. Then in April 2012, a car accident left him paralyzed from the shoulders down.

His spinal cord was severed in the crash, and Keeley was hospitalized for a year, eight months of which he spent in critical condition. The following year was devoted to physical rehabilitation.

At the ceremony, an emotional Keeley described the district judges’ choice to appoint him as courageous, and he commended them for choosing him based on his capabilities rather than his physical limitations.

“I thought I could bring a lot to the table experience-wise,” Keeley later told the Tulsa World.

He also was seeking new professional challenges and said he has enjoyed his first 2½ months on the bench.

“The family law docket … is a very busy, challenging docket,” he said.

The docket has been “moving right along” with the help of staff, Keeley said.

Presiding Judge Carlos Chappelle told a full gallery of Keeley’s family and friends that the new judge has done “a great job so far.”

“We know he’s going to do a great job in the future,” he added.

Nearly 30 others applied for the post, but Keeley’s emphasis on the importance of being decisive and prompt stood out, he said.

Keeley was sworn in by Associate District Judge Dana Kuehn and robed by District Judge William Musseman. He was presented a gavel engraved with his name and the day’s date from the Tulsa County Bar Association .

“I look forward to serving you all. Thank you,” Keeley concluded in a brief speech.

Applicants undergo interviews with two committees during the six- to eight-week process and are ultimately chosen by the county’s district court judges.

Five years for a guilty verdict: Family grateful for conviction in mother's 2016 murder

"You expect it to be like this relief, like everything after the fact is just right in the world," Shamia Thomas said. "But in reality — yes, we got justice, he’s behind bars — but nothing’s all right again, because that person’s still gone."

New Tulsa County Special Judge James Keeley waves at a friend while greeting guests after being sworn in at the Tulsa County Courthouse on Friday. JAMES GIBBARD/Tulsa World