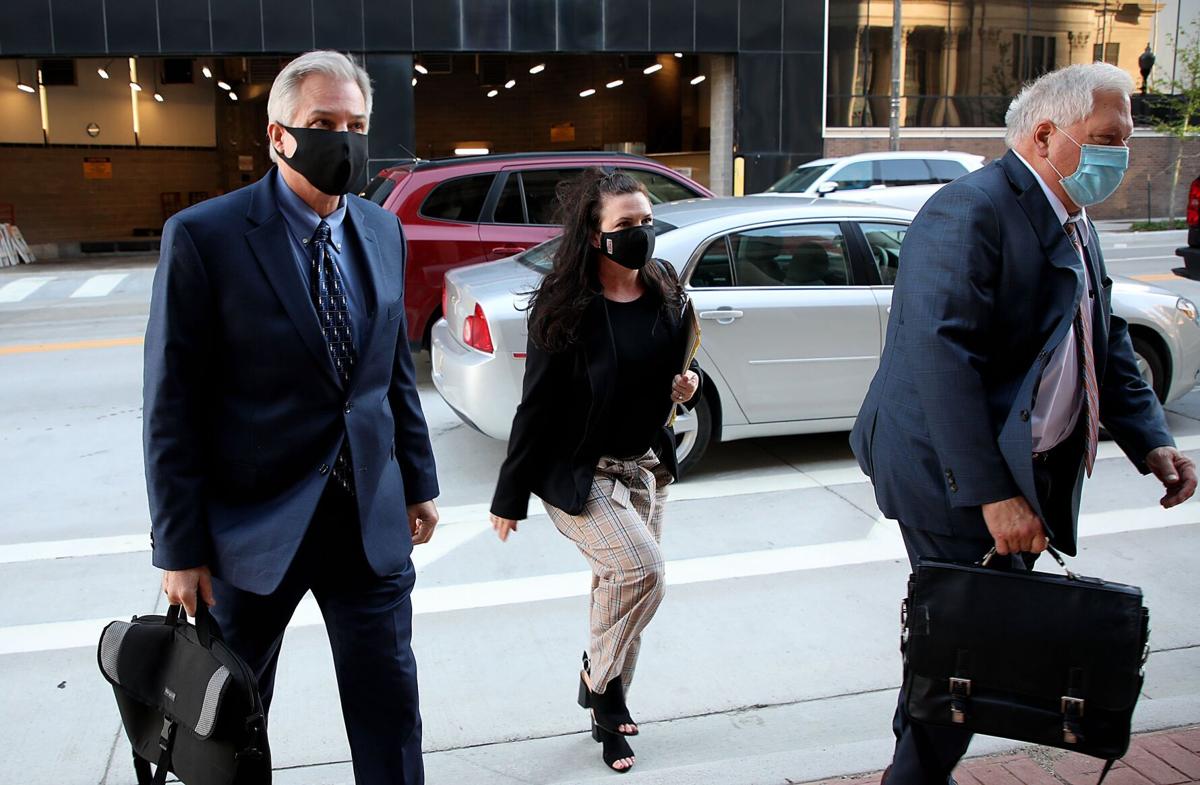 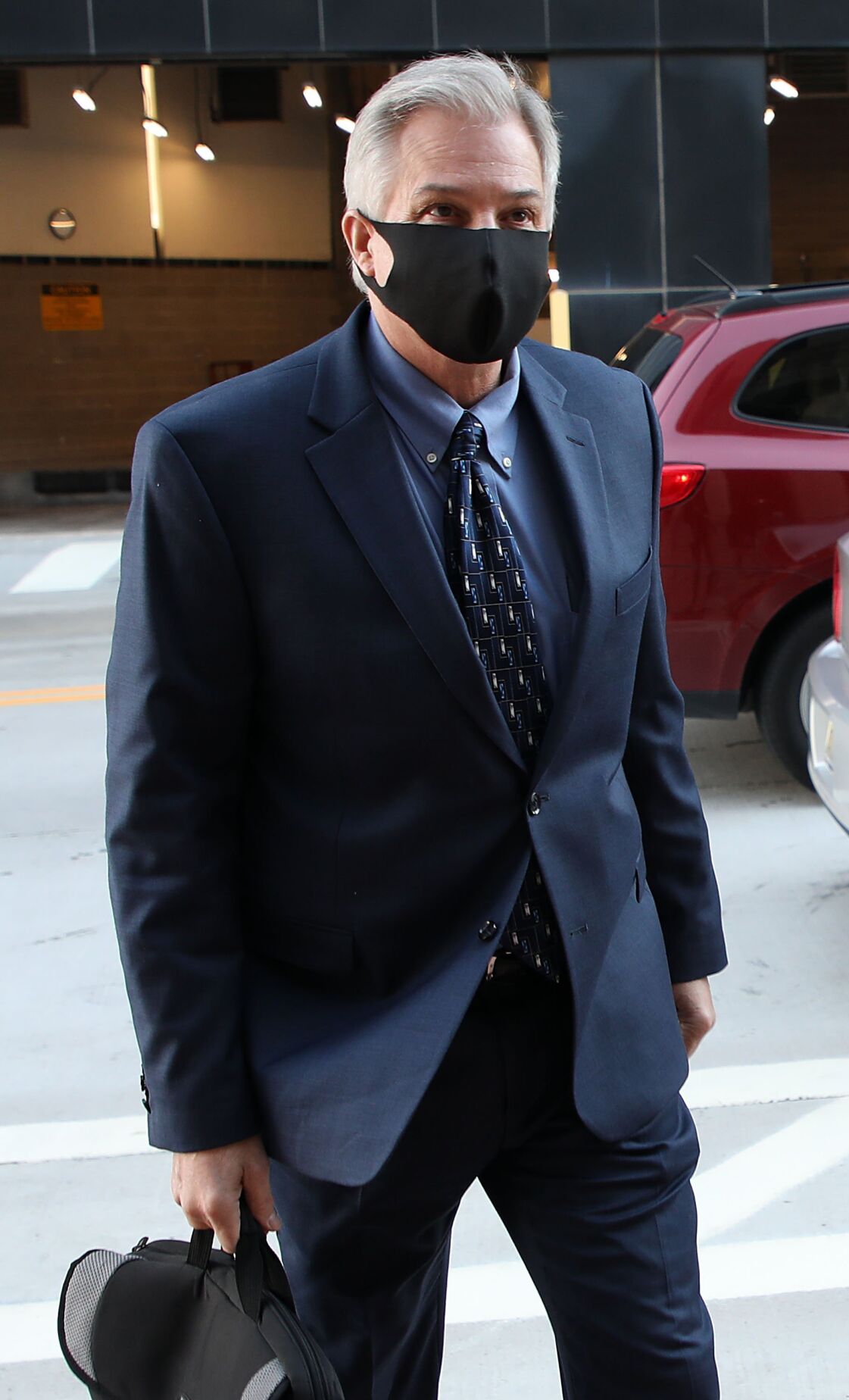 Former Tulsa Police Officer Shannon Kepler arrives court at the Tulsa Federal Building for his fifth trial on Monday in the killing of Jeremey Lake. Kepler was charged in federal court after the state Court of Criminal Appeals overturned his state manslaughter conviction and 15-year prison term on jurisdictional grounds.

A federal jury acquitted former Tulsa Police Officer Shannon Kepler, 60, of first-degree murder but convicted him of lesser gun-related crimes, which could still result in his spending the rest of his life in prison, according to his attorney.

The jury found Kepler guilty of discharging a firearm during a crime of violence that resulted in the second-degree murder of Jeremey Lake, 19, in 2014.

The jury also convicted Kepler of one count of assault with a deadly weapon in connection with shots fired at another person.

Kepler had successfully appealed his manslaughter conviction and 15-year prison term in state court on jurisdictional grounds and now could face more time in prison when he is sentenced on the federal convictions. His sentencing is scheduled for Aug. 11 before U.S. District Judge Gregory Frizzell.

Stan Monroe, Kepler’s attorney, said he was “extremely disappointed” with the guilty verdicts, but he said Kepler would appeal the convictions.

He claimed after the trial to media that the statute of limitations has already run out on the second-degree murder-related count.

U.S. marshals took Kepler into custody after the verdict was announced.

This was Kepler’s fifth trial in connection with the fatal shooting of Lake.

Kepler’s first three first-degree murder trials in state court — between November 2016 and July 2017 — ended in hung juries. A fourth state trial ended in October 2017 with the jury convicting the 24-year veteran of the Tulsa Police Department of the lesser charge of first-degree manslaughter.

“Today, Shannon Kepler was found guilty of using and discharging a firearm in the second degree murder of Jeremey Lake and for assaulting Lake’s brother with a firearm in Indian Country after his previous state conviction was dismissed as a result of the U.S. Supreme Court’s McGirt decision,” said Acting U.S. Attorney Clint Johnson. “I am thankful for today’s verdict, and the jury is to be commended for their service.

“I’m extremely proud of the FBI and Tulsa Police Department as well as Assistant U.S. Attorneys Ross Lenhardt and Sean Taylor for their tireless preparation and successful prosecution of Mr. Kepler in federal court.”

Kepler has claimed that he was trying to find his 18-year-old daughter, Lisa, on the evening of Aug. 5, 2014, when he encountered her and Lake near the home of Lake’s aunt, where they were staying, in the 200 block of North Maybelle Avenue.

Kepler told the jury he shot Lake after Lake pointed a gun at him, although no gun was found on or near the teen after he was shot.

Kepler and his wife had dropped Lisa off at a homeless shelter downtown about five days before the shooting because she had not been following household rules.

Kepler said he later became concerned about Lisa after he read on her Facebook page that she was in a relationship with Lake and after learning that Lake had been arrested when he was 15 for threatening a social service worker where he was staying.

A federal grand jury named Kepler in a three-count indictment in November.

The indictment was issued in anticipation of the Oklahoma Court of Criminal Appeals’ overturning of Kepler’s 2017 state first-degree manslaughter conviction and 15-year prison term in March on jurisdictional grounds.

The state appellate court’s ruling was based on a landmark U.S. Supreme Court ruling in July that determined that the boundaries of the Muscogee (Creek) Nation reservation were never disestablished.

The ruling meant major crimes involving American Indians that occurred within the boundaries of the Muscogee (Creek) Nation reservation were the jurisdiction of either the federal or tribal governments rather than the state.

Kepler appealed his October 2017 state conviction and sentence in part on grounds that the McGirt v. Oklahoma ruling also applied to him since he is a member of Muscogee (Creek) Nation and the shooting death occurred within a part of Tulsa that is within the reservation.

During closing arguments Monday, Assistant U.S. Attorney Ross Lenhardt urged jurors to reject any notion that Kepler didn’t mean to shoot Lake or fire his handgun in the direction of others sitting on a nearby front porch that August evening.

“This was an intentional act,” Lenhardt said.

Kepler’s attorney, Stan Monroe, told jurors during his closing arguments that police botched the investigation into who placed a gun in a trash can in a Tulsa Police Department headquarters interview room.

Monroe suggested that a witness to the shooting removed a gun from the area around Lake after he was shot and discarded it in the trash can while being interviewed by detectives.

“We submit the young man was pointing a gun at Shannon Kepler,” Monroe argued to the jury. “He had to make a split-second decision, ladies and gentlemen. He didn’t have time to reflect.”

Prosecution testimony showed that no other witness reported seeing Lake with a gun and that the one found in the trash can had no blood on it.

A forensic crime scene expert hired by prosecutors also determined that Lake was not holding a gun in his right hand when he was shot, as Kepler claimed.

The maximum amount of time Kepler could face on the two convictions was not immediately known.

Whatever the prison terms, federal law requires those convicted of using a firearm to cause a death during a crime of violence to serve that sentence after all others are completed.

In this case, Kepler will have to serve out his sentence on the assault with a deadly weapon charge first. That charge calls for up to 10 years in prison.

Devon Bryant Blevins, 28, faces up to life in prison when he is sentenced March 29 in Tulsa federal court.

Former Tulsa Police Officer Shannon Kepler arrives court at the Tulsa Federal Building for his fifth trial on Monday in the killing of Jeremey Lake. Kepler was charged in federal court after the state Court of Criminal Appeals overturned his state manslaughter conviction and 15-year prison term on jurisdictional grounds.