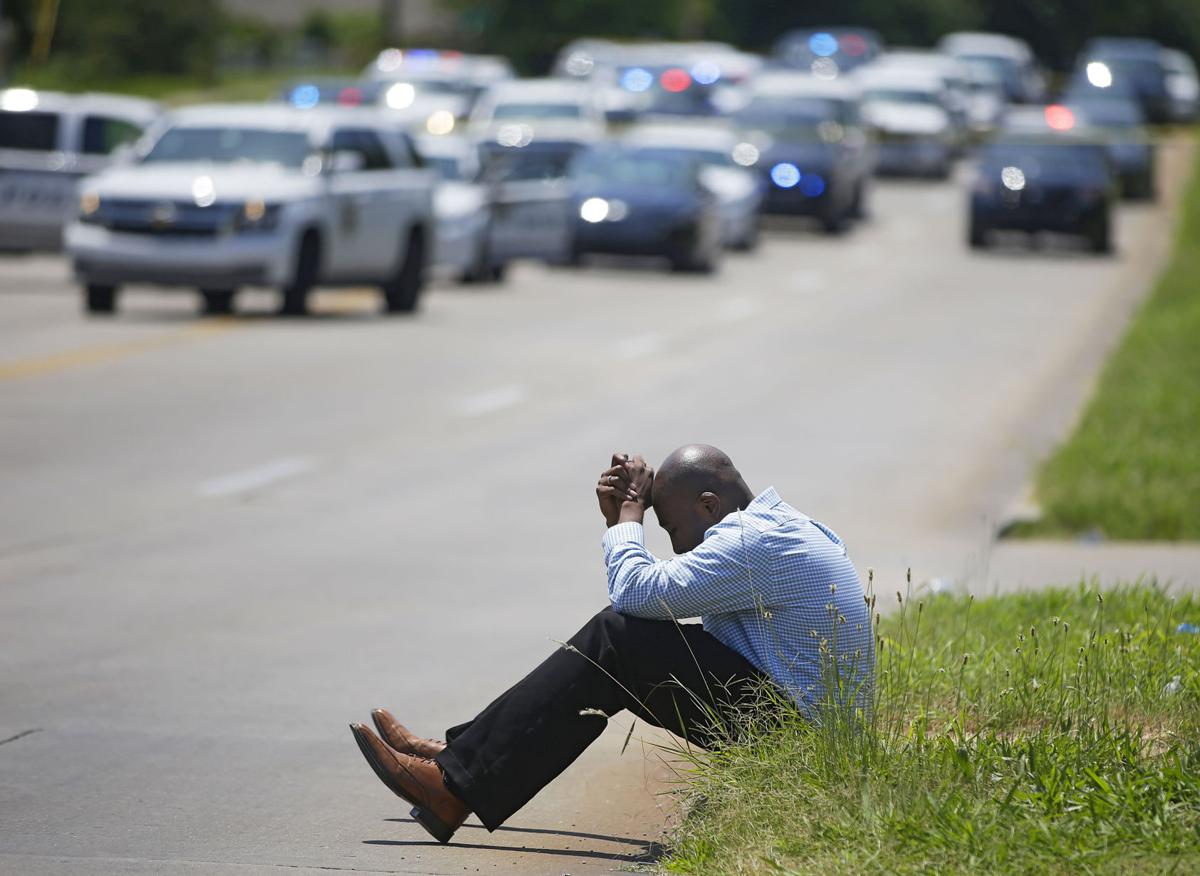 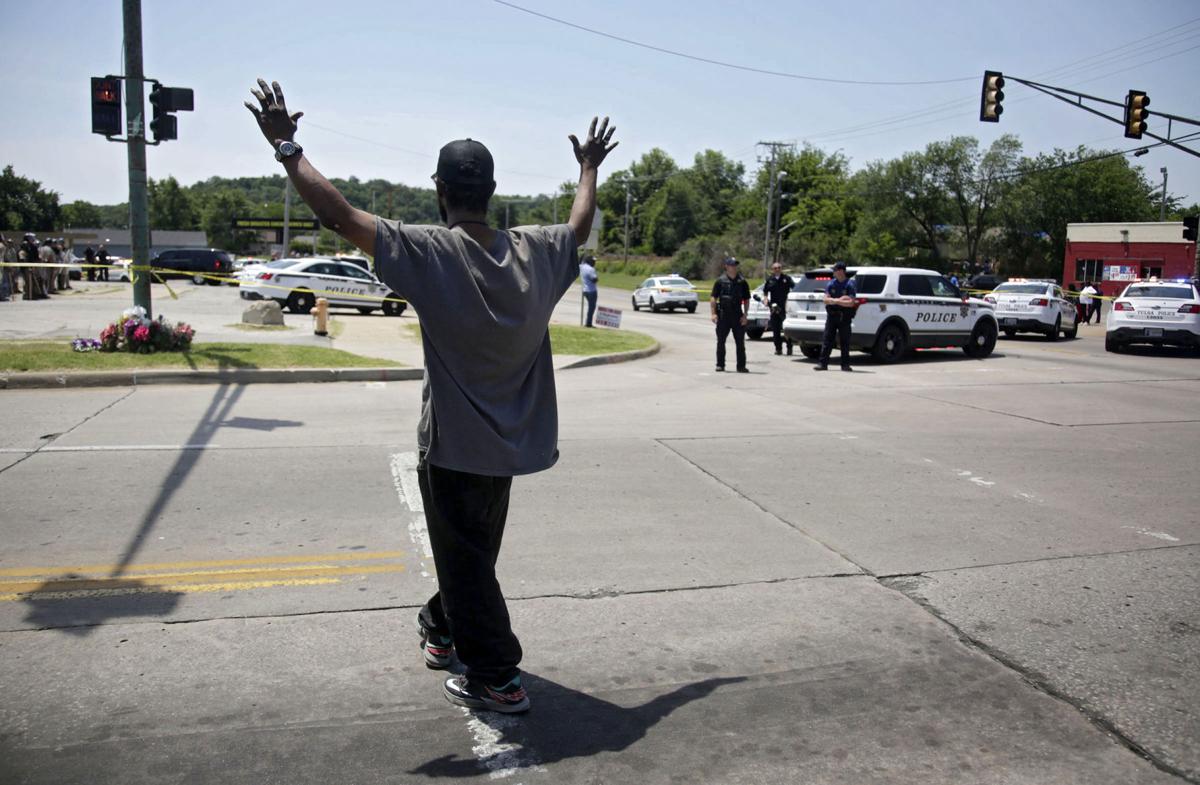 A man protests with his hands up after a mentally ill man brandishing two knives was fatally shot by law enforcement officers in north Tulsa on Friday. MIKE SIMONS/Tulsa World 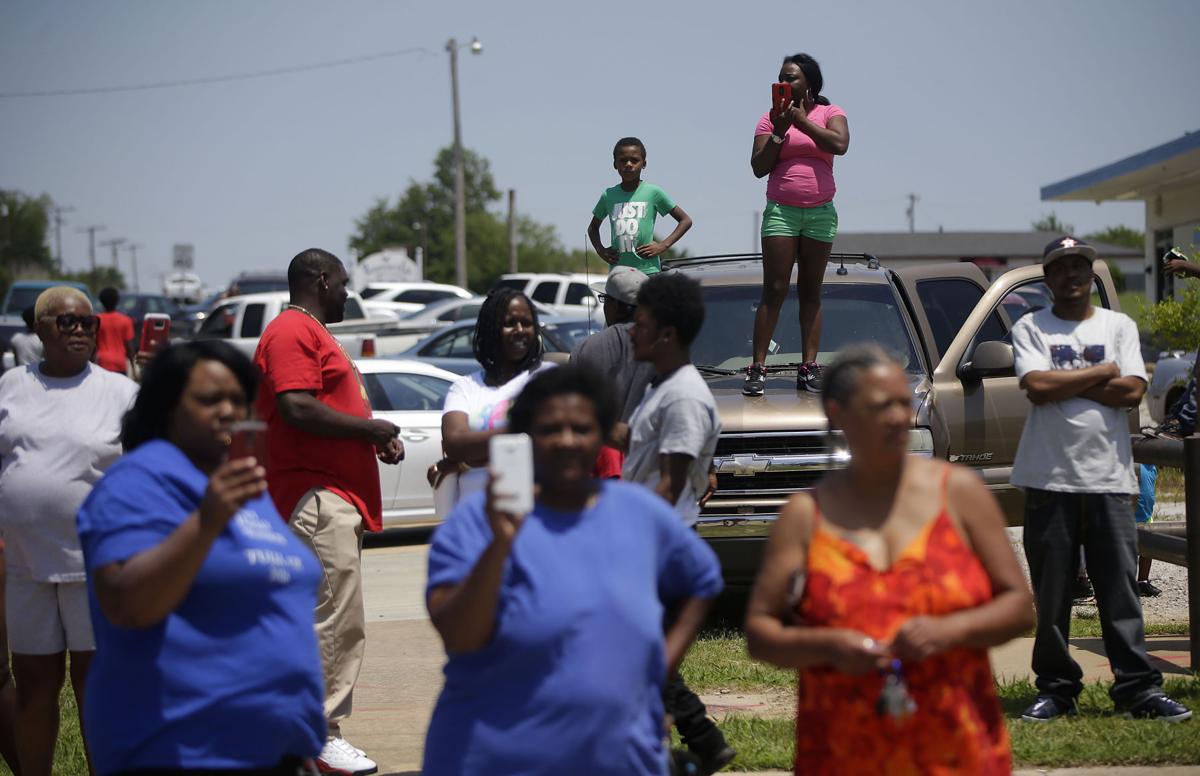 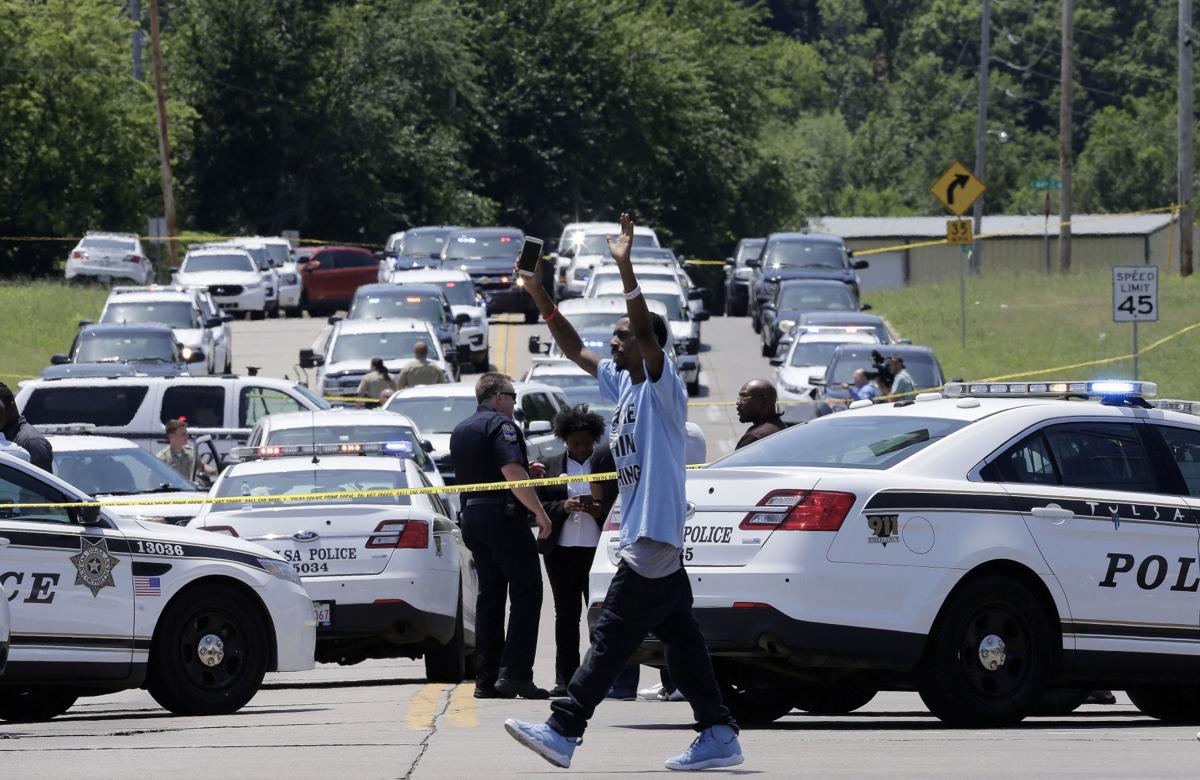 A man with his hands up walks past police officers during an investigation of the police shooting on Martin Luther King Jr. Boulevard on Friday. CORY YOUNG/Tulsa World

The fatal police shooting of a mentally ill man brandishing two knives in north Tulsa on Friday culminated in an intense protest and the deployment of officers in riot gear.

Tempers flared as an emotional crowd the police estimated at 300 people condemned the latest deadly police encounter in north Tulsa. Protesters chanted “f--- the police” from behind crime scene tape and shouted obscenities at investigators.

In response to the rapidly deteriorating situation, Tulsa police officers outfitted with protective gear and carrying riot shields swarmed the site of the shooting. Although no physical encounter with the crowd occurred, there was an instance where at least two rocks were hurled toward law enforcement officers, and a fight broke out between two men.

More than 50 police vehicles responded to the scene, and the Tulsa Police Department’s massive Mobile Command Center made a brief appearance.

“I never thought that in 2017, some s--- like this would be going down,” said 82-year-old north Tulsa native Bobby Eaton Sr., who was a leader in the city’s civil rights movement. “But here we are.”

Police Department spokesman Officer Leland Ashley said deputies with the Tulsa County Sheriff’s Office’s Mental Health Unit were trying to serve a civil “pickup order” for a 29-year-old man at his home in the 300 block of West 50th Street North when he walked away from the area. A Sheriff’s Office spokeswoman said a judge had issued the order for the man to undergo a mental-health evaluation or treatment.

Police released a statement Friday night expanding on the background of the case. Deputies had failed to take Barre into custody on the mental-health warrant on three occasions since June 1, when Barre reportedly had a hammer and threatened to kill officers from within his home. He was in the house alone, and “did not pose an immediate threat to the public,” police said in the statement. “Due to those circumstances, deputies left the house and chose to follow up on a later date.”

On Monday, “deputies were notified by a neighbor that Mr. Barre was up the previous night and scaring her children. Deputies were unable to locate Mr. Barre on that date,” the statement continues.

On Wednesday, deputies tried again to take Barre into custody at his residence, but Barre threatened to kill officers. The deputies left without forcing entry into the house or taking Barre into custody because, again, he didn’t “pose an immediate threat to the public,” according to the Police Department’s statement.

On Friday, police received four 911 calls between 9:50 a.m. and 9:56 a.m. reporting that a shirtless man with “two butcher knives” or a “machete” was walking down the street. Deputies had also been informed by a neighbor that Barre was “in the street armed with two large knives,” and they requested assistance from the Police Department.

Two deputies came upon Barre in the 300 block of West 50th Court North and ordered him to drop the knives, telling him that “they were there to get him help,” the police statement says. “Barre refused to drop the knives or stop, (and) he threatened to kill the deputies,” the statement continues.

Barre continued to Martin Luther King Jr. Boulevard and walked south while deputies continued to follow him and tell him to drop the knives.

Barre walked toward a convenience store at 4449 N. Martin Luther King Jr. Blvd. “Fearing that he would enter (the) store and endanger … the public, commands were given to him to stop and not enter the store,” police said in the statement. As Barre opened the store’s door and stepped inside around 10 a.m., two sheriff’s deputies and a police officer opened fire, striking him an unknown number of times, Ashley said.

Police reported that a deputy had used a Taser on Barre before he opened the door but that it had no effect on him.

Barre was taken to a hospital, where he was soon pronounced dead.

The crowd had already started forming as detectives began to process the scene, setting up markers to pinpoint the spent shell casings. One man who said he was Barre’s brother berated officers for killing a mentally ill man and asked how they would be able to sleep at night. Activist Angie Pitts demanded answers from police Homicide Unit Sgt. Dave Walker, who told her he needed to return to his investigation.

Tensions escalated as dozens of people gathered at a store across the street and chanted expletives at law enforcement officers. The group increased in size over the next hour and evolved into a full-out protest, prompting the arrival of riot gear and police demanding that reporters and photojournalists move a block away “for their safety.”

A lot of the anger expressed by protesters carried over from the recent acquittal of Tulsa Police Officer Betty Shelby on a manslaughter charge in the fatal shooting of Terence Crutcher, which sparked its own protest outside the Tulsa County Courthouse in mid-May. Friday marked the first police shooting in north Tulsa since that verdict.

“We just don’t want it to be like Betty Shelby,” 31-year-old Adrian Colbert said of Friday’s shooting.

Colbert, a member of Black Lives Matter, criticized what he believed to be a coverup in the aftermath of Crutcher’s death last September and said he hopes the current investigation is handled differently. He said it was unfair that Shelby was allowed to view video of the Crutcher shooting before being interviewed by police. He also said it was unfair that her interview wasn’t conducted until three days after the shooting.

He remarked that Friday’s protest is the largest he has seen in Tulsa.

“You want to know why? Because we’re tired. They’re scared of us, but they don’t have to be,” Colbert said. “We’re just gentle giants. We’re stereotyped.”

Community member Larry Mougell took issue with the lack of black police officers assigned to north Tulsa. He said a history of unfair treatment by law enforcement has brought feelings to a boiling point.

“The majority of the police who patrol our neighborhoods don’t look or resemble anything like the people who live in the neighborhoods,” Mougell said. “At this point, what are people to do with their backs to the wall? It would be a mistake if we began policing our own neighborhoods. The police would have an issue with that.”

He said he hopes for a better relationship with authorities rather than the situation being “the community verses them.”

In the middle of Friday’s chaotic scene, police chaplain and pastor Andru Morgan sat on a curb with his head on his clasped hands. He had spent the past few hours trying to comfort the deceased man’s family members and upset spectators. He said he needed a moment to pray and ask God to help him push on after becoming exasperated.

“This is a group of people that has been disenfranchised and upset, and we’re going to strive in this community to do more and try to gather everyone together,” Morgan said. “The common theme here is we understand that hate can’t drive out hate. We understand that only love can do it.”

The chaplain commended the crowd for a mostly peaceful protest and said people heeded every request to move away from the crime scene. He also thanked law enforcement officers for backing away from protesters when asked.

After the crowd eventually dispersed and the police tape was removed, state Rep. Regina Goodwin told reporters there needs to be a change in how law enforcement handles people who are mentally ill. She also said it is past time for Tulsa officers to be equipped with body cameras to ensure fairer investigations and perhaps deter future shootings.

“Living every day through these situations day in and day out, you do begin to wonder, ‘Where is the urgency to see that this community is made whole?’” Goodwin said. “You cannot in any way get toward trust or respect if we can’t come together and see application of all these feel-good meetings we have.”

Also on Friday afternoon, the American Civil Liberties Union asked the Tulsa Police Department and the Tulsa County Sheriff’s Office to turn over the investigation to an independent entity. A statement from the nonprofit organization called it absurd for residents to trust a system that’s demonstrated a “clear pattern of immoral and unethical behavior” to investigate itself.

A man protests with his hands up after a mentally ill man brandishing two knives was fatally shot by law enforcement officers in north Tulsa on Friday. MIKE SIMONS/Tulsa World

A man with his hands up walks past police officers during an investigation of the police shooting on Martin Luther King Jr. Boulevard on Friday. CORY YOUNG/Tulsa World 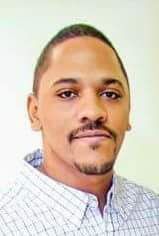