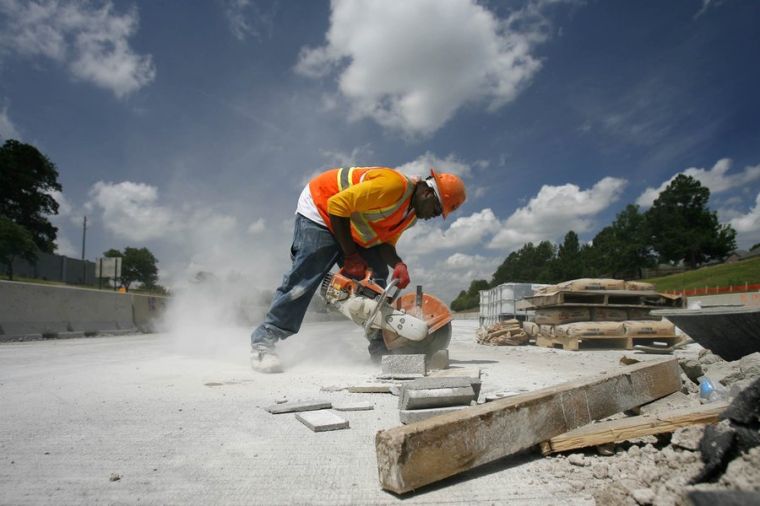 Ricardo Davis runs a saw in a work zone along the Creek Turnpike in Tulsa last week. The project is one of several currently underway by the Oklahoma Turnpike Authority. MATT BARNARD / Tulsa World 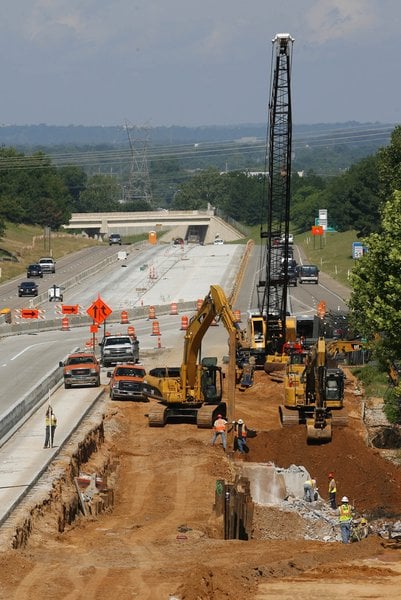 A crane towers over a construction zone on the Creek Turnpike in Tulsa last week. The project is one of several currently underway by the Oklahoma Turnpike Authority. MATT BARNARD / Tulsa World 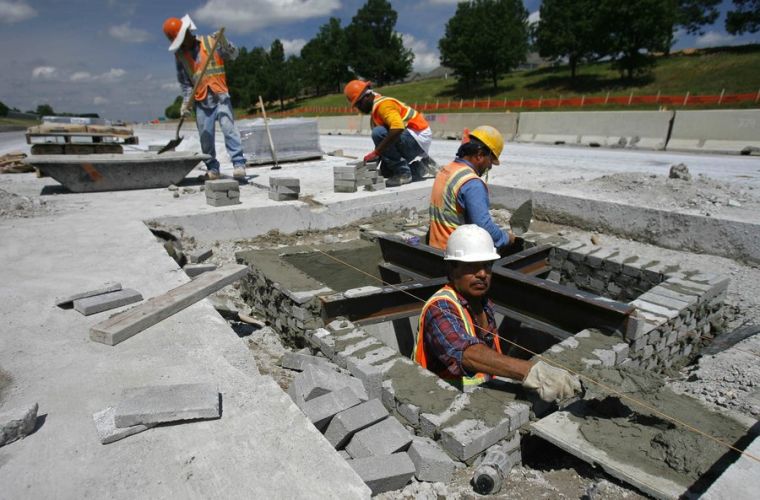 Jose Ramos (foreground right) and other workers build a drain inlet along the Creek Turnpike in Tulsa.

The new director of the Oklahoma Turnpike Authority said heavy summer construction is making drivers avoid the toll roads and is dragging revenues down.

Tim Stewart, who became the OTA director in April after Oklahoma Transportation Secretary Gary Ridley retired, said this year has had a drop in projected revenues due to a low economy and heavy construction.

The lower-than-projected growth will have an impact on OTA's ability to keep pace with an aging infrastructure and rising costs for repair, Stewart said.

"Our revenue has not come in as we previously forecasted so we are revisiting that forecast," Stewart said. "Some of it is the economy, and some of it is the construction activity going on. We've driven some customers away."

"We hope that as we open those facilities - they are new and improved (with) greater capacity ... we'll see a return of those customers we lost as well as, hopefully, some new customers," he said.

On turnpikes connected to the Tulsa area, there are about eight areas of construction including the widening of the Creek Turnpike, scheduled to wrap up in the fall of 2013.

The Creek Turnpike project is expanding the roadway by one lane in both directions from U.S. 75 to the Memorial Drive interchange, according to OTA reports.

The Creek Turnpike in 2012 accounted for about 10 percent of all turnpike revenue. It's the fourth most-valuable stretch of turnpike for the authority behind the Turner, Will Rogers and John Kilpatrick turnpikes, according to the OTA's 2012 annual report.

"We have aging infrastructure that will continue to demand much of our revenue," Stewart said. "The Turner Turnpike is turning 60 years old this year."

The OTA maintains 2,388.6 lane miles, according to OTA reports.

An under-projection revenue is a concern for OTA officials because they then have to push back new construction projects, he said.

In the short term, it's not a major issue, but in the long term, OTA needs to stay ahead of the aging roadways, Stewart said.

"We're a little behind what we would have normally seen," Stewart said. "We think finishing these projects will return a lot of that traffic. And as the economy starts stabilizing and growing again, we see that as an opportunity."

Roads under construction have a direct effect on their revenue and almost every turnpike in Oklahoma currently has construction, according to OTA's website.

Major projects underway now include a renovation of the Vinita Service Plaza, known for its turnpike-spanning McDonald's.

OTA officials have upcoming projects they hope will decrease their expenses.

Efforts to add weigh stations to entry routes in Oklahoma have been underway for more than a year, and Stewart said the Will Rogers Turnpike will soon have a weigh station paid for by the authority.

While fines collected at the weigh station are state fines and cannot go to OTA, the authority hopes preventing overweight vehicles from using the turnpikes will cut down on wear to the roadways.

"Where we see the benefit is overloaded trucks that damage our infrastructure, bridges and pavements," Stewart said. "If you minimize those, you have the opportunity to reduce that capital cost."

Despite not receiving fines generated at the weigh stations, the authority plans to fully fund the stations on their turnpikes.

"We are trying to position ourselves where we can help (the state or others) if needed," Stewart said. "If you haven't traveled us lately, do so. We're safe. We're convenient. And we're doing everything we can to improve that. Be patient with us, and we'll be done with construction soon."

To date in 2013, there has been about a 1 percent increase in revenue

Charges against a slew of defendants in a March killing were dropped Tuesday and re-filed, earning Gabriel Hopson a lesser charge of accessory to murder and Wendell Alexander, formerly identified as a witness, a charge of first-degree murder in the March slaying of Eric Graves.

Chris Webb resides in Owasso, according to court records, but his construction work often brought him to Tulsa, police said.

Ricardo Davis runs a saw in a work zone along the Creek Turnpike in Tulsa last week. The project is one of several currently underway by the Oklahoma Turnpike Authority. MATT BARNARD / Tulsa World

A crane towers over a construction zone on the Creek Turnpike in Tulsa last week. The project is one of several currently underway by the Oklahoma Turnpike Authority. MATT BARNARD / Tulsa World

Jose Ramos (foreground right) and other workers build a drain inlet along the Creek Turnpike in Tulsa.