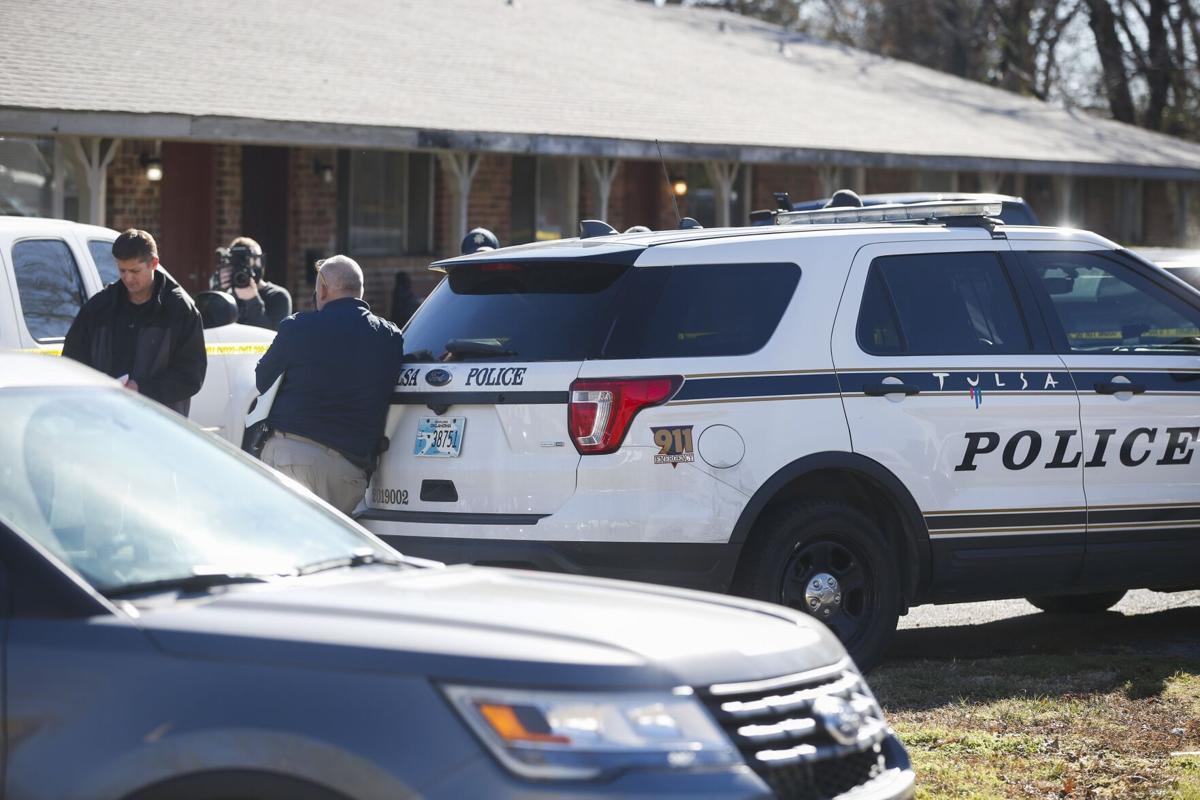 Tulsa police homicide detectives investigate early Tuesday after a body was found at a north Tulsa apartment complex. Just hours earlier homicide detectives had arrested a suspect in the city’s second homicide of 2022. An alleged accessory in that slaying was arrested later Tuesday. 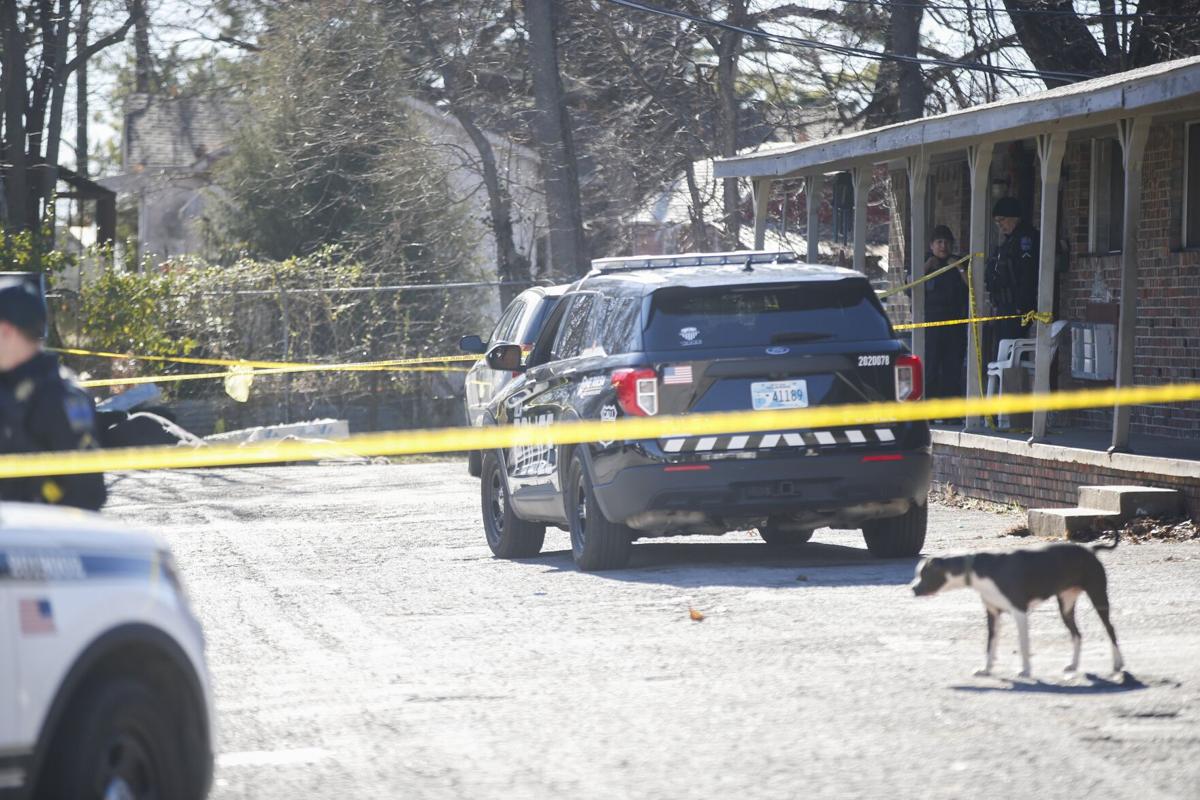 A dog walks behind the crime-scene tape at a north Tulsa apartment complex where a body was found Tuesday morning. 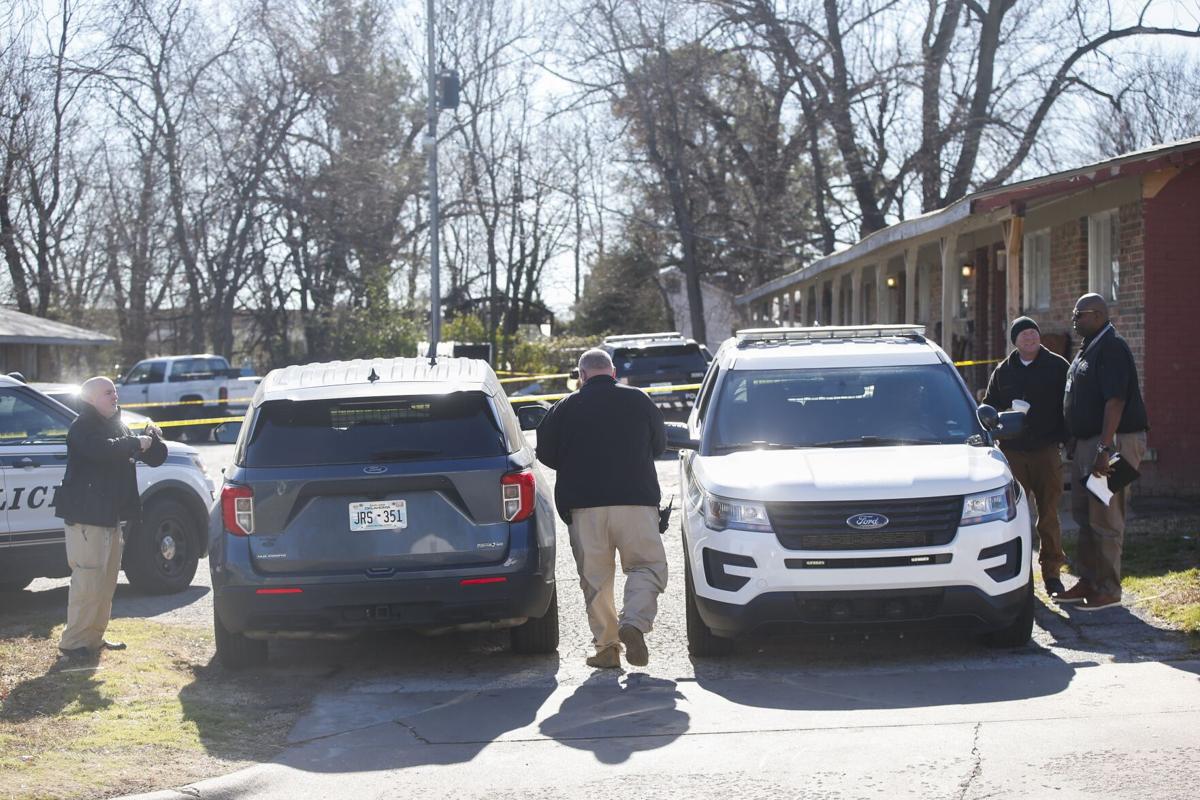 Homicide detectives confer at a north Tulsa apartment complex after a body was found there early Tuesday. 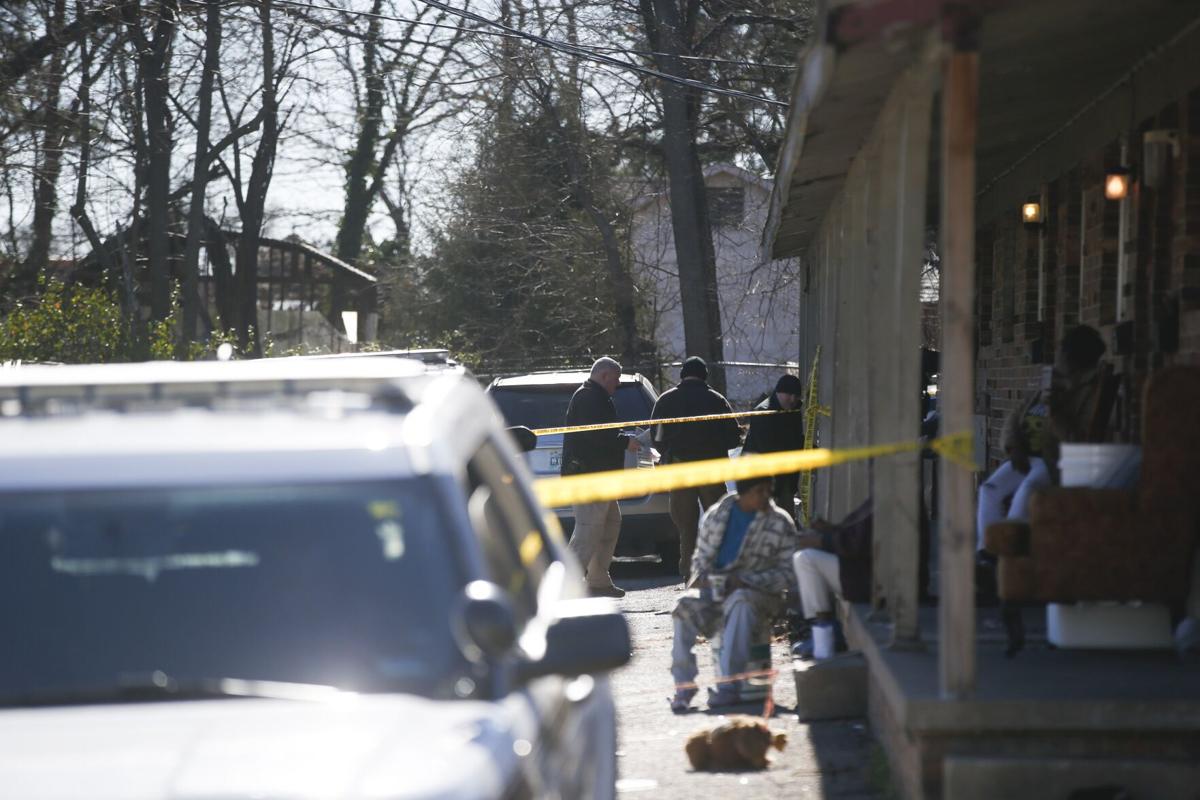 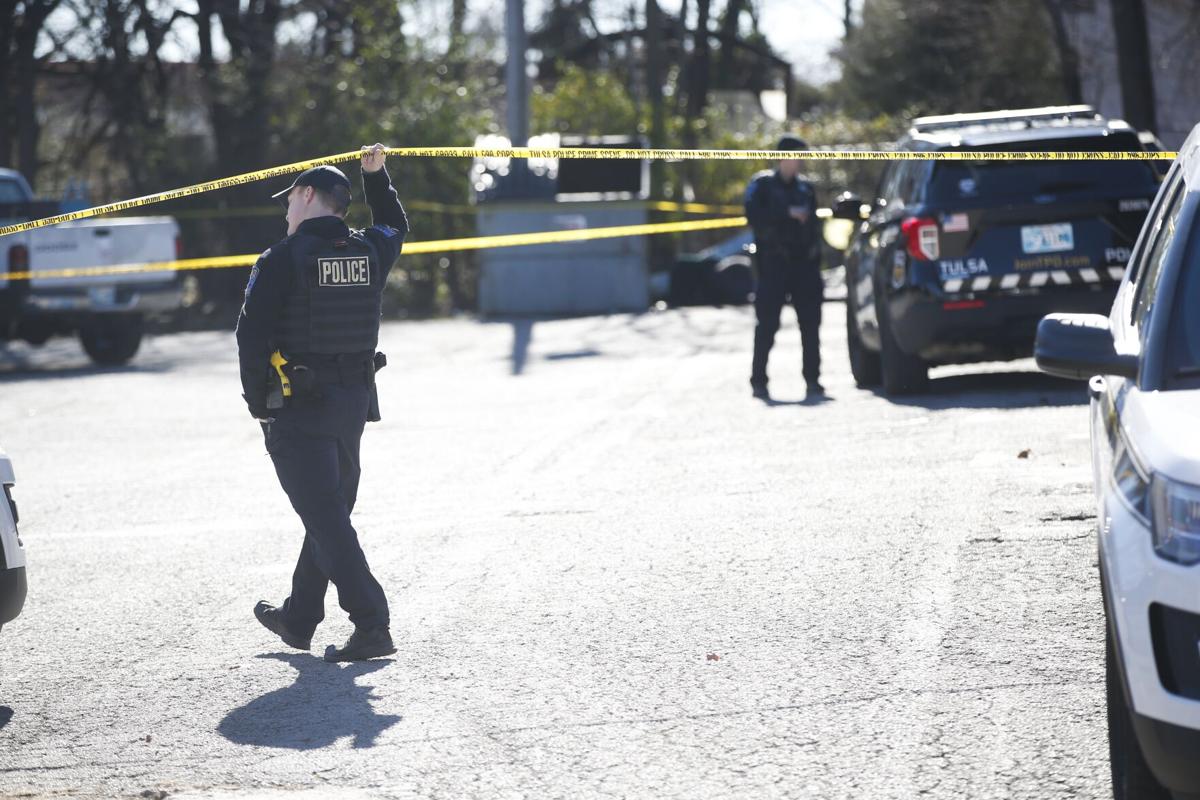 A police officer lifts crime-scene tape to enter the area where a body was found at a north Tulsa apartment complex Tuesday morning.

This week has been busy for Tulsa homicide detectives, who investigated one homicide at a north Tulsa apartment early Tuesday and by early that afternoon were announcing arrests in the city’s second homicide of 2022.

Detectives suspect foul play after a young man was found dead at the Oakley Apartments in north Tulsa on Tuesday morning.

The death — Tulsa’s third homicide of 2022 — was reported about 8:45 a.m. near Tecumseh Street and Harvard Avenue. A neighbor and friend of the man’s had gone to see him and found the body, Police Department Public Information Officer Andre Baul said.

Trauma was evident on the body, Baul said, but homicide detectives were unsure what had caused the trauma.

Most of the complex’s parking lot was cordoned off by crime-scene tape as neighbors and family members gathered outside.

Hours after that call, police announced the arrests of two men in connection with the second homicide of the year.

Carl Couch, 36, was charged Tuesday with first-degree murder in the fatal shooting of Michael Johnson, 41, who was found with a gunshot wound at a north Tulsa home a week earlier. Jeremy Paul York, 47, was charged with accessory to murder.

On Monday, patrol officers located Couch, who was questioned by homicide detectives and was booked into the Tulsa County jail later that night.

Couch, listed as homeless in jail records, is held without bond.

York reportedly was taken into custody Tuesday. He is held in lieu of $500,000 bond.

Officers were called to the residence, just north of Admiral Place on Florence Avenue, about 10:30 p.m. Jan. 5. Johnson died at a hospital several hours later.

According to an affidavit, Johnson and his girlfriend had just arrived at Johnson’s home after winning some money at a casino when they were ambushed and chased by a group of people “who shot Johnson in the head.”

During the investigation following the homicide, police found information that indicated the shooting resulted from a drug debt owed to a person incarcerated with the Oklahoma Department of Corrections and affiliated with the Universal Aryan Brotherhood prison gang, according to the affidavit.

The information indicated that Johnson owed the gang member money for narcotics and had not paid his debt. A group of people were ordered to collect the debt or take Johnson’s Ford Mustang, according to the affidavit.

Police apparently were told different stories about what happened.

One witness reportedly said Couch, who the witness knew as “A.J.,” told the witness he shot Johnson “after the victim was getting the upper hand during a physical altercation.”

The witness told officers that Couch, another man and a woman had gone to collect the debt from Johnson.

After the homicide occurred, York went to collect the .22-caliber handgun and silencer that was used in the homicide, the witness reportedly said. The witness alleged that York then took the gun apart and threw it in the river.

On Monday, police interviewed another witness who was present during the shooting, according to the affidavit. That person had been kidnapped and forced to go with Couch and the other debt collectors, the person told police.

When the group arrived at Johnson’s house, Couch and the woman confronted Johnson, who then ran to his front porch as Couch shot him twice, according to that witness.

Later Monday, after officers had arrested Couch, he told investigators he did shoot Johnson, according to the affidavit. He reportedly said his girlfriend, the woman who was with him during the shooting, had cheated on him with Johnson.

Couch reportedly told police he waited for Johnson to arrive at home and then banged on Johnson’s car window, making Johnson run away from him.

“(Couch) said he has been to prison before, and this will be the last time he goes to prison,” the affidavit states.

Kelsy Schlotthauer and Anna Codutti contributed to this story.

This week's local crime and court updates from Tulsa World.

The Tulsa Police Department ended the year with more open cases than is typical, but detectives say they're confident closure will come.

The man is the city's second homicide victim of 2022.

Two arrested in beating death of woman, 29, at her Tulsa home

Sarah Maguire reportedly knew the man and woman arrested in her slaying: Brinlee Denison and Nicholas Johnson, who were arrested when found with her vehicle in Arkansas.

Officers responded about 10:30 p.m. to a residence just north of Admiral Boulevard on Florence Avenue, where they found a man with a gunshot wound who later died at a hospital.

A couple who routinely walk the area of a strip mall along U.S. 75 told police they first noticed the device Tuesday.

Detectives believe the boy was struck in a volley of rounds sent toward him and his older brother.

Seven Oklahomans among those arrested over attack on U.S. Capitol

Seven Oklahomans have been arrested on federal charges as a result of the ongoing investigation into the storming of the U.S. Capitol on Jan. 6, 2021.

The Oklahoma State Medical Association said having medical experts on the Health Care Authority's governing board is essential because decisions made at the agency affect thousands of Oklahomans.

Woman killed in home Tuesday in Tulsa's first homicide of 2022

Her car was located in Fayetteville, Arkansas, where two people were arrested by Fayetteville police on possession of stolen vehicle complaints and "other charges," Tulsa police said.

Tulsa Crime Stoppers organized the meeting, which included other stakeholders, as part of its mission to prevent crime throughout the city.

He was originally sentenced to 22 years in federal prison for hiring hit men to kill rival Carole Baskin and for crimes involving his animals. A federal appeals court ruled in July that he must be resentenced because of a judicial mistake.

A federal appeals court in July ruled that Joe Exotic, whose real name is Joseph Maldonado-Passage, should get a shorter sentence.

More than 75 shots fired in 61st and Peoria shootout

No one was hit — as far as police know — but two homes with multiple people inside were hit, police said. Four vehicles also had bullet holes in them.

The man died at the scene, and the homeowner was treated at a hospital for the injuries he received during the assault.

Police arrest 13-year-old in slaying of another teen, Tulsa's 61st homicide of the year

Lamar Norman III is the second youngest homicide victim of the year, along with another 13-year-old who had been killed just five days earlier in west Tulsa.

The driver in one pursuit was arrested after he attempted to run away from his damaged vehicle on foot, only to be chased by fire marshals and eventually forced out of an apartment in which he was hiding, police said.

Tulsa police homicide detectives investigate early Tuesday after a body was found at a north Tulsa apartment complex. Just hours earlier homicide detectives had arrested a suspect in the city’s second homicide of 2022. An alleged accessory in that slaying was arrested later Tuesday.

A dog walks behind the crime-scene tape at a north Tulsa apartment complex where a body was found Tuesday morning.

Homicide detectives confer at a north Tulsa apartment complex after a body was found there early Tuesday.

A police officer lifts crime-scene tape to enter the area where a body was found at a north Tulsa apartment complex Tuesday morning.

Carl Couch (left) and Jeremy York are accused in the slaying of Michael Johnson in Tulsa.