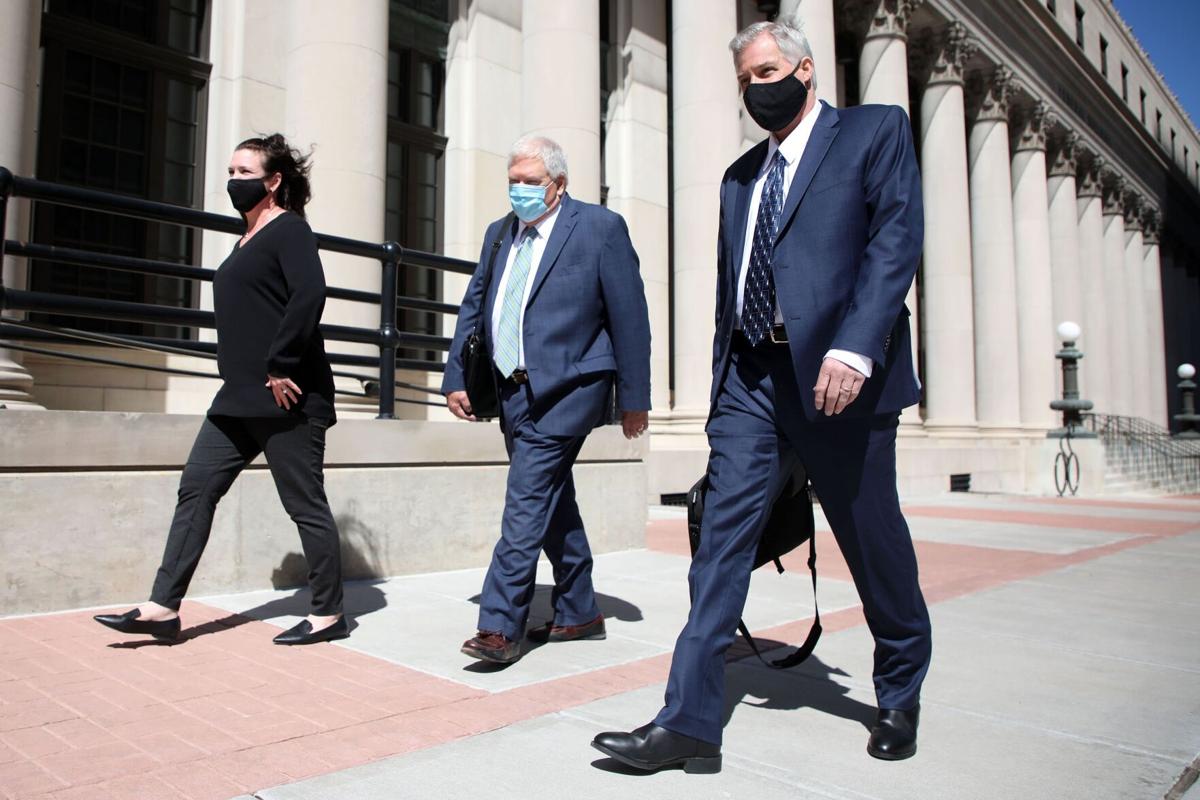 Former Tulsa Police Officer Shannon Kepler (right) leaves the Federal Building in downtown Tulsa on Monday as his fifth trial gets underway in the shooting death of Jeremey Lake. Kepler is being tried in federal court after his state sentence and conviction were thrown out on jurisdictional grounds. 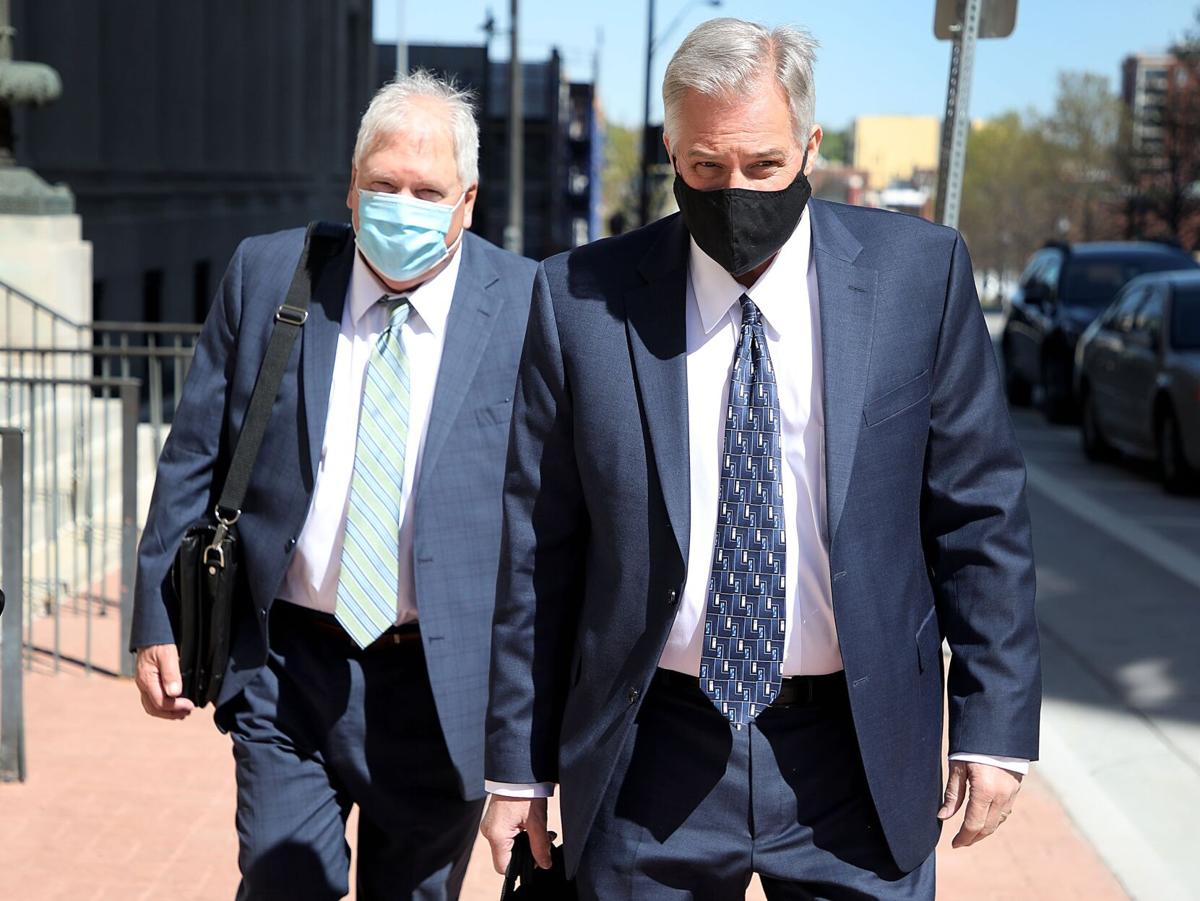 Opening statements are expected Tuesday morning in the fifth murder trial of former Tulsa Police Officer Shannon Kepler in connection with the shooting death of his daughter’s boyfriend nearly seven years ago.

Attorneys for the prosecution and defense spent Monday afternoon whittling down 32 potential jurors to nine men and five women who will make up the 12-member jury with two alternates.

Kepler is being tried for the fifth time — this time in Tulsa federal court — after the Oklahoma Court of Criminal Appeals overturned his Tulsa County first-degree manslaughter conviction and 15-year prison term on jurisdictional grounds.

The appellate court’s March 18 ruling is consistent with a landmark U.S. Supreme Court ruling in July that determined that the Muscogee (Creek) Nation reservation, established in the 1860s, was never disestablished.

The ruling meant major crimes involving American Indians that occurred within the tribal boundaries of the Muscogee (Creek) Nation reservation were the jurisdiction of either the federal or tribal governments rather than the state. Courts have since expanded the ruling to apply to the Cherokee, Chickasaw, Choctaw and Seminole reservations, as well.

Kepler, 60, appealed his October 2017 state conviction and sentence in part on grounds that the McGirt v. Oklahoma U.S. Supreme Court ruling applied to him.

Kepler is a member of the Muscogee (Creek) Nation, and the Tulsa shooting death occurred within the tribe’s reservation.

Kepler fatally shot Jeremey Lake, 19, on Aug. 5, 2014, in the 200 block of North Maybelle Avenue. Kepler claims that Lake was armed and that he shot him in self-defense, although no weapon was found on or near Lake after the shooting.

In anticipation that Kepler’s state court conviction would be overturned in the aftermath of the McGirt ruling, a federal grand jury named the former police officer in November in a three-count indictment that charges him with first-degree murder in Indian Country, causing a death by use of a firearm during a crime of violence in Indian Country and assault with a dangerous weapon in Indian Country.

Kepler’s first three first-degree murder trials in state court — between November 2016 and July 2017 — ended in hung juries. A fourth state trial ended in October 2017 with the jury convicting the 24-year veteran of the Tulsa Police Department of the lesser charge of first-degree manslaughter.

U.S. District Judge Gregory Frizzell, who is presiding over the trial, warned potential jurors that trial testimony could last until next Monday, prompting a handful of them to be excused.

Ten of 32 potential jurors answered yes when asked if they were aware of the case.

Meanwhile, defense attorney Stan Monroe’s questions to potential jurors included what their leisure activities were, whether they were gun owners or members of the National Rifle Association, and what types of justifiable reasons a person might have for killing someone.

This is one of the first trials to be held in Tulsa federal court since the COVID-19 pandemic hit the state in mid-March 2020.

Kepler’s trial is being held in the old federal courthouse on Boulder Avenue downtown, which has one of the larger courtrooms in the district.

Frizzell apologized to jurors for the cave-like acoustics in the courtroom and construction noise outside, noting that it was the first time in “decades” that a trial has been held in the third-floor courtroom.

US Navy sailor puts training to work in boat rescue

US Navy sailor puts training to work in boat rescue

Lisa Kepler confirmed with prosecutors that she did not want any charges brought against Shannon Kepler, a former Tulsa police officer, on her behalf, despite allegations that he fired a handgun in her direction after fatally shooting Jeremey Lake on Aug. 5, 2014.

After government testimony concluded, U.S. District Judge Gregory Frizzell denied a motion from Kepler’s defense to dismiss the case against him on the basis of insufficient evidence.

Former Tulsa Police Officer Shannon Kepler (right) leaves the Federal Building in downtown Tulsa on Monday as his fifth trial gets underway in the shooting death of Jeremey Lake. Kepler is being tried in federal court after his state sentence and conviction were thrown out on jurisdictional grounds.