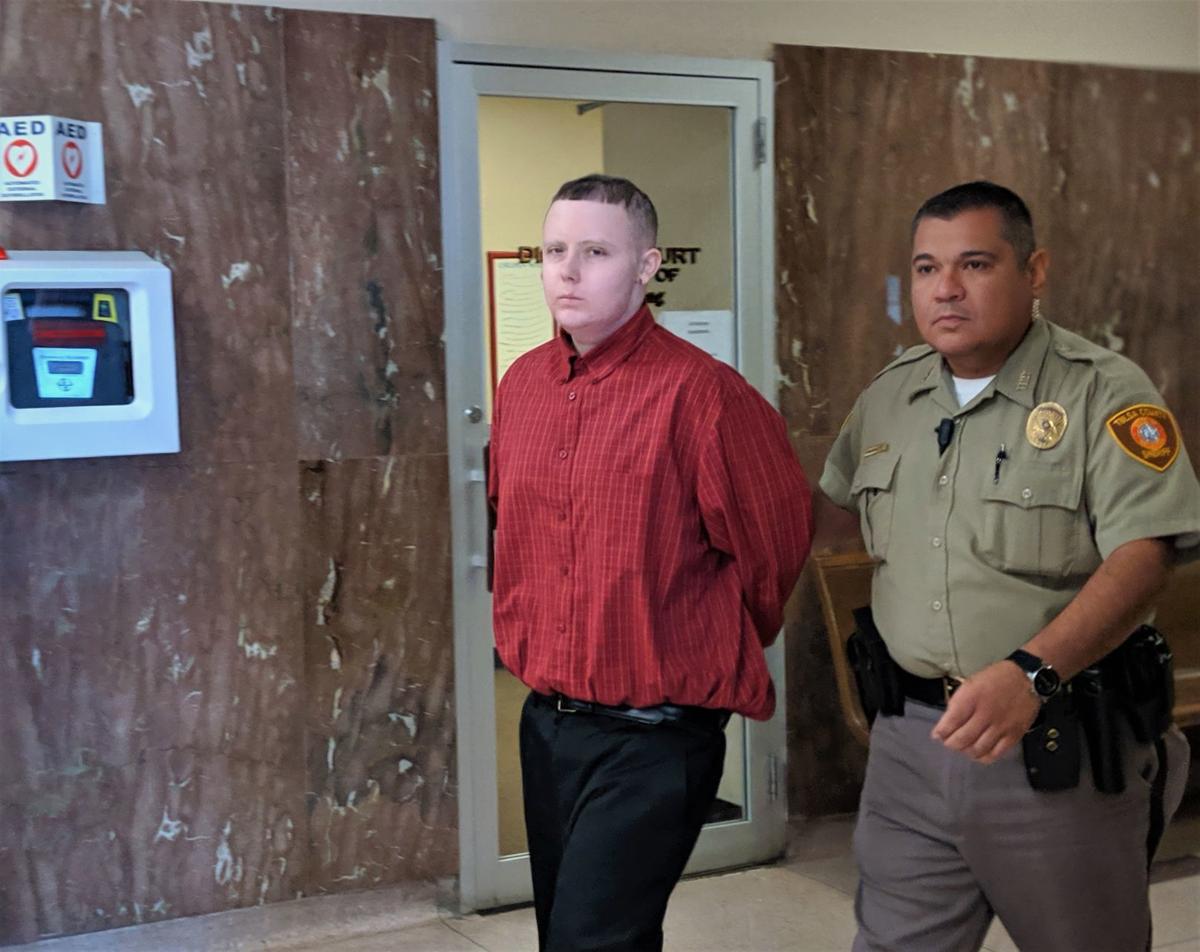 Hadyn Sainsbury (left) is escorted back to the Tulsa County jail during a recess in his murder trial on Wednesday. A jury found him guilty Thursday of first-degree manslaughter and recommended that he spend 34 years in prison. SAMANTHA VICENT/ Tulsa World 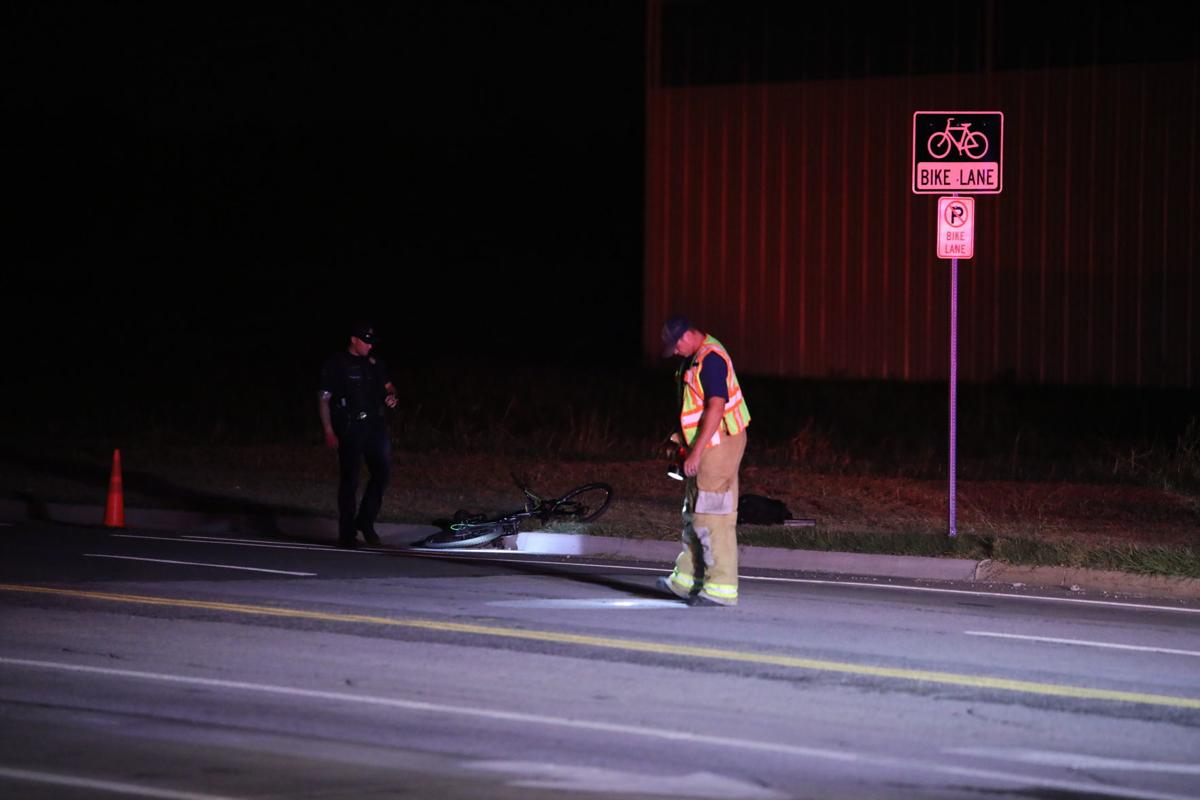 A police officer and a firefighter work at the scene where a bicyclist was shot and killed Aug. 10. HARRISON GRIMWOOD/Tulsa World file

A jury on Thursday recommended that an Owasso 18-year-old spend 34 years in prison after finding that he committed first-degree manslaughter when he shot his mother’s on-and-off boyfriend in what a prosecutor called “vigilante justice.”

Hadyn Lee Sainsbury faced a first-degree murder charge for the Aug. 8, 2018, shooting of Roy Cobb, but jurors deliberated for about three hours before convicting the teen of a lesser-included offense of first-degree manslaughter in the heat of passion.

Cobb, 37, was riding his bicycle on Mingo Road near 36th Street North when Sainsbury spotted him, got out of his Jeep Cherokee and shot at him five times with a handgun. Sainsbury was en route to Owasso from the Keystone Lake area when he saw Cobb and his bicycle.

District Judge William LaFortune will sentence Sainsbury on Oct. 21. Sainsbury will be required to serve at least 85% of the sentence LaFortune imposes before he is eligible for parole consideration.

Sainsbury’s mother had called him on the evening of the homicide and said Cobb, who had been convicted previously of burglary and aggravated assault and battery, had physically abused her that day. Assistant Public Defender Stuart Southerland told the jury Cobb was an abusive presence in Sainsbury’s life, as well as for his mother and siblings, and that when he ran into Cobb that night he was “thinking about all the times this has happened before.”

However, Tulsa police detectives said they saw a home surveillance video of the altercation Sainsbury’s mother referenced. Sainsbury, who testified in his own defense, admitted Thursday that he deleted the video before police could take it as evidence because “I thought that there was no reason to keep it.”

Assistant District Attorney Kevin Gray said during his opening statement that the footage showed Cobb and Sainsbury’s mother physically attacking each other before Cobb rode his bicycle away from the residence.

Sainsbury told Southerland he simply wanted Cobb to stop hurting his mother and was not trying to kill anyone. But under cross-examination from Gray, he conceded that he shot at Cobb, striking him twice, after Cobb — who was unarmed — tried to flee. Cobb died early Aug. 9, 2018, at a Tulsa hospital.

When asked why he had a weapon with him, Sainsbury said he obtained one previously “to do whatever I could for my family.” He also said attempts to break ties with Cobb had failed.

“I’m the man of the house,” Sainsbury said. “I tried the law. Law has not done (anything) for me.” He and Southerland also alluded to the stress of his long-term battle with leukemia, although LaFortune limited direct references to Sainsbury’s health status during the trial.

Two women who were driving in the area that night testified that they saw a vehicle parked along Mingo Road and that the driver later made a U-turn before driving back toward Owasso. Sainsbury testified that he cut Cobb off on the road after seeing him on his bicycle, then got out of his car and fired.

The women said they later realized a man was injured but initially thought he was the victim of a hit-and-run.

Sainsbury told police in an interview that “it wasn’t the right thing” to shoot Cobb but said “it was just out of instinct.” Tulsa Police Detective Mark Kennedy told Sainsbury, “We can’t be vigilantes out here,” to which Sainsbury eventually said, “I’m 100% guilty.”

”We knew that he was guilty,” Clem said out of court. “We’ve known all along. And the worst part of it was they had been so smug, like it didn’t matter, but there’s a life gone.”

In his testimony on Thursday, Sainsbury told Gray he was about 6 to 7 feet from Cobb when he started shooting. However, he maintained that he was not necessarily aiming to kill Cobb but rather wanted to scare him.

”When you’re standing this close to somebody, I mean, come on,” Gray said of the comment during his closing argument.

Southerland said Sainsbury’s actions did not meet the criteria for first-degree murder, which he said is “the worst of the worst a person can do.” He said there was clear proof that Cobb was a negative influence and asked the jury to give Sainsbury, who was 17 at the time, a chance to improve someday.

But Gray said Sainsbury was wrong to kill Cobb in an act of “vigilante justice” instead of reporting him to authorities.

Prosecutors most recently filed a felony domestic abuse case against Cobb on July 13, 2018, based on an April 2018 incident in Owasso. The charge was pending at the time of his death.

“You may really hate Roy Cobb,” Gray told the jury. “I don’t care. He didn’t deserve to die in the street.”

The remains, identified as Samantha Puckett, 34, were found by a photographer wandering around the park who stumbled across a human skull.

A nightclub employee was shot and killed early Saturday morning while trying to break up an altercation, Tulsa police said.

Officers were notified Wednesday morning about the vandalism at the Sherwin Miller Museum of Jewish Art after the two were seen on surveillance video knocking over five metal statues dedicated to Jewish children who were murdered in the Holocaust.

U.S. Attorney in Muskogee announces plan to resign by end of week

"Why he decided to do that to me, I have no idea," owner Brandy Adkins said. "If he was in that bad of need he could’ve come in here and asked. People donate for a reason.”

The teens, a 15-year-old boy and a 16-year-old boy, are accused of damaging early Wednesday five statues dedicated to Jewish children who were murdered in the Holocaust.

An investigation had determined Jerry Brown, who retired the week after news of his arrest broke, made off with nearly $320,000 from two Osage County financial institutions last spring.

Hadyn Sainsbury (left) is escorted back to the Tulsa County jail during a recess in his murder trial on Wednesday. A jury found him guilty Thursday of first-degree manslaughter and recommended that he spend 34 years in prison. SAMANTHA VICENT/ Tulsa World

A police officer and a firefighter work at the scene where a bicyclist was shot and killed Aug. 10. HARRISON GRIMWOOD/Tulsa World file