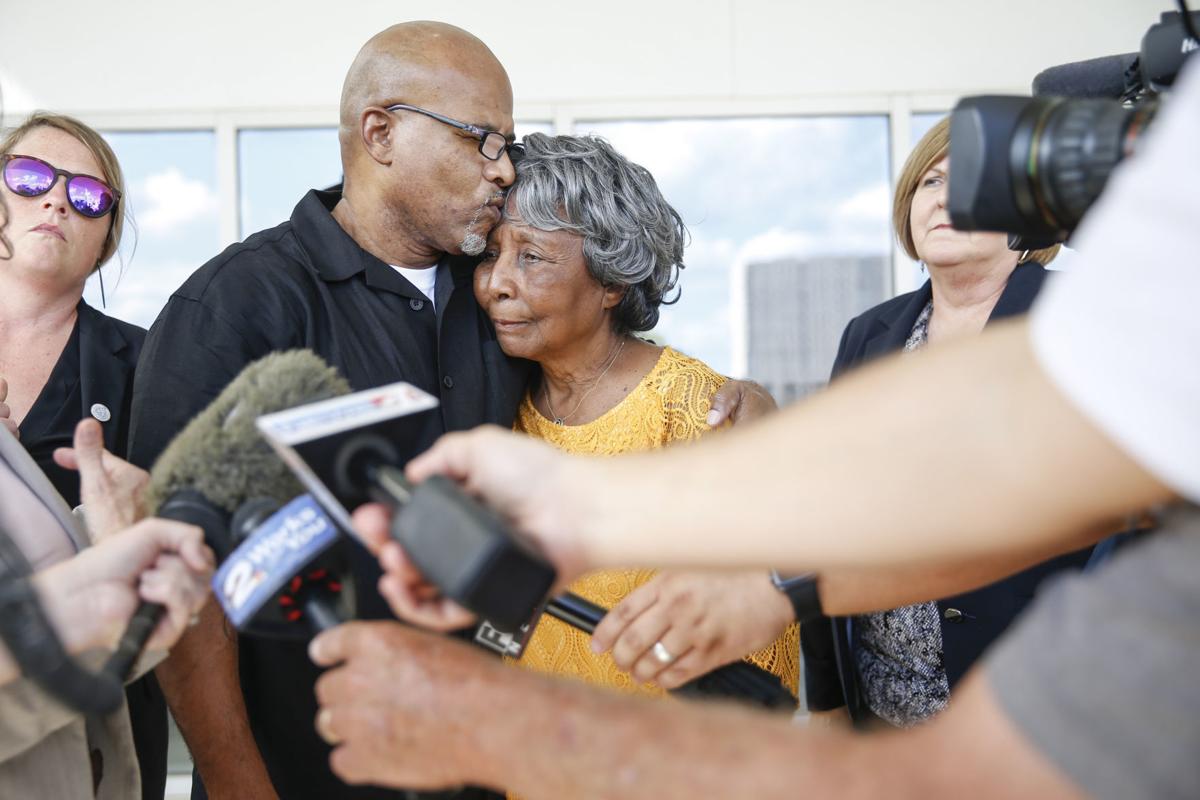 Willard O’Neal kisses his mother, Elreno O’Neal, while reporters interview his attorneys after his release from incarceration on Thursday. He spent 17 years in jail or prison for a first-degree murder conviction that was vacated due to the help of the Innocence Project. IAN MAULE/Tulsa World 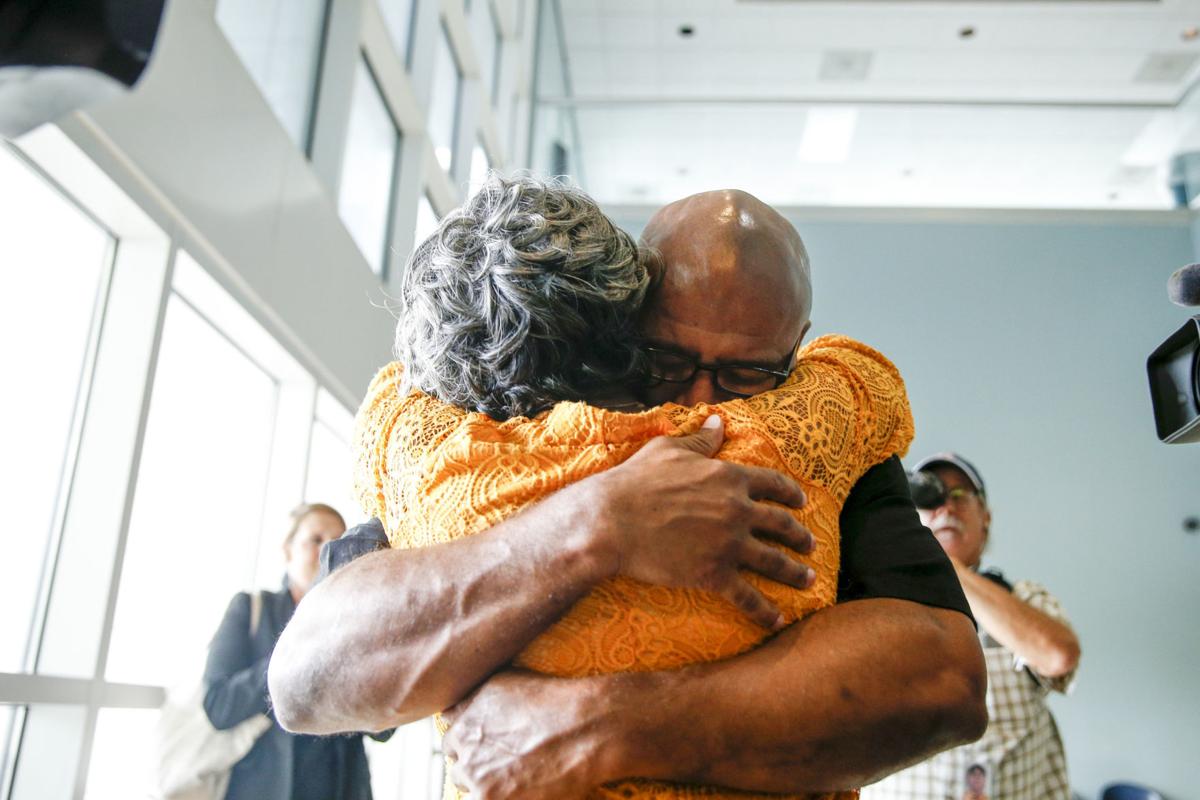 Willard O’Neal hugs his mother, Elreno O’Neal, while reporters interview his attorneys after his release from incarceration on Thursday. He spent 17 years in jail or prison for a first-degree murder conviction that was vacated due to the help of the Innocence Project. 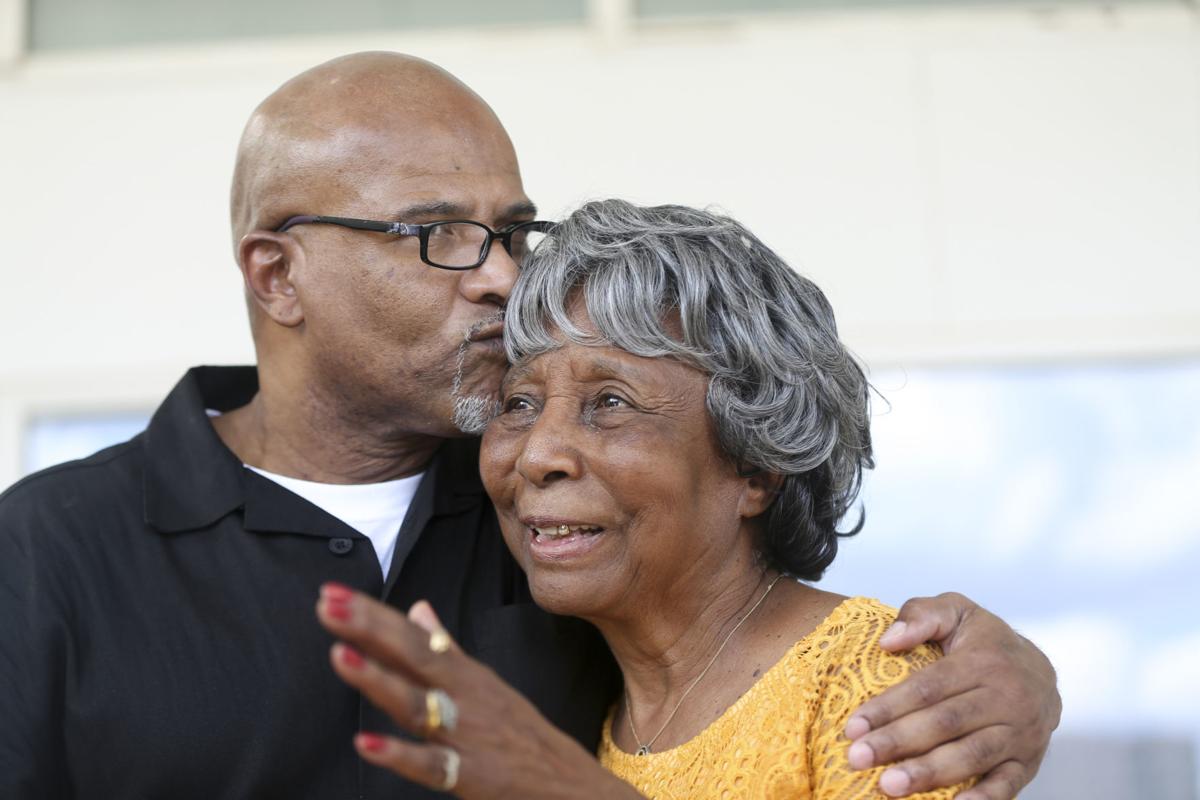 Willard O’Neal kisses his mother, Elreno O’Neal, at the Tulsa County jail after his release on Thursday. He spent 17 years in jail or prison for a first-degree murder conviction that was vacated due to the help of the Innocence Project. IAN MAULE/Tulsa World 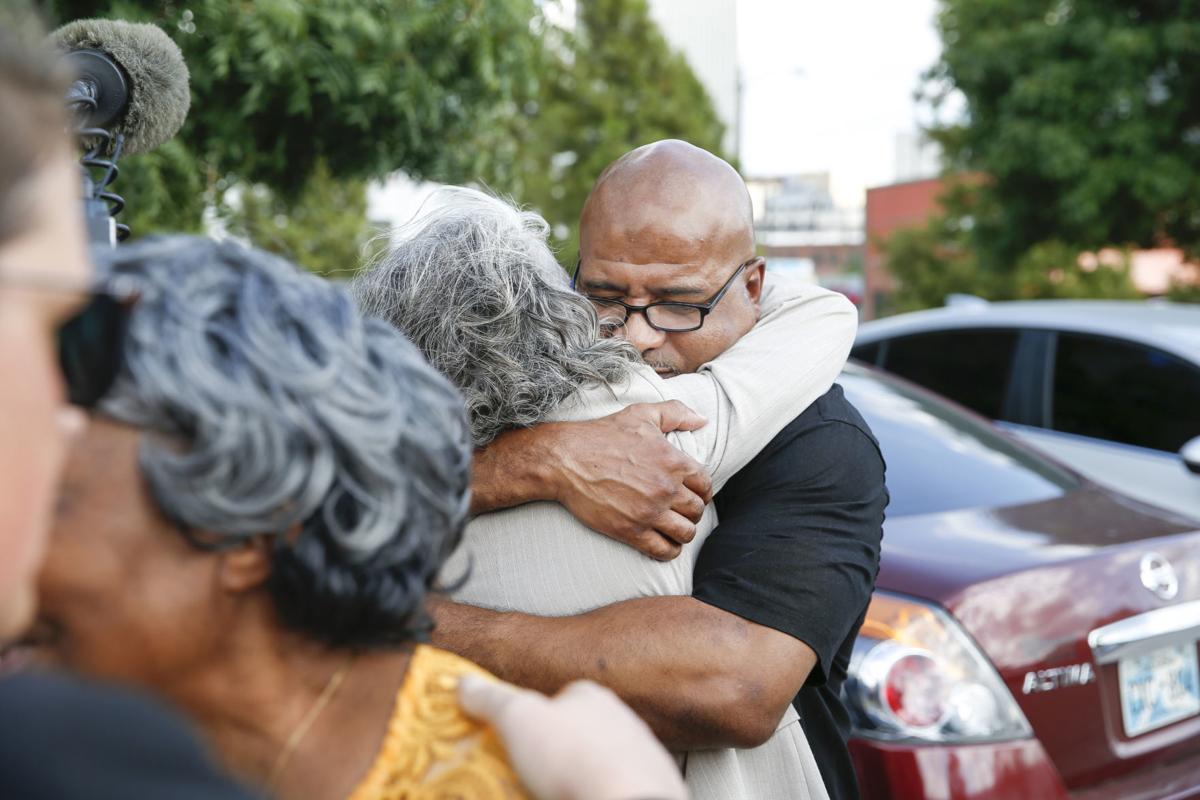 Man is given two life sentences in murder outside tavern

The first thing Willard O’Neal did when he walked out of the Tulsa County jail as a free man on Thursday afternoon was point to his mother, Elreno O’Neal, and tell the group of onlookers in the lobby that he wanted a hug from her. The two embraced for at least 30 seconds, then Willard O’Neal went outside and said, “I’m free.”

“I’m at a loss of words, really,” he said of his first moments out of custody since his arrest for first-degree murder and shooting with intent to kill in 2002. “I’m just excited, that’s all I can say. I’m not gonna let her go this time.”

O’Neal was convicted in 2004 of murder and received a life without parole sentence in the Dec. 23, 2001, shooting of Bruce Chamberlain, who owned the Trapeze Lounge at 3113 S. 101st East Ave. He also had a sentence of life with the possibility of parole on a conviction in the shooting of Gildardo “Tonto” Rueda, a club employee who survived his injuries.

But Tulsa County District Judge Sharon Holmes vacated O’Neal’s convictions and sentences Thursday morning, accepting his no-contest plea to an amended charge of second-degree murder. She ordered him to have no contact with Chamberlain’s family.

The Tulsa County District Attorney’s Office agreed to the reduction and a sentence of 19 years in prison, but Holmes ordered O’Neal’s release on Thursday, noting that he has already served at least 85% of the term. Holmes dismissed the shooting with intent to kill charge as part of the plea deal, which came with the assistance of the Oklahoma Innocence Project and the Oklahoma City University School of Law.

“Unfortunately, that happens a lot in post-conviction work,” said Vicki Behenna, Oklahoma Innocence Project executive director emeritus and O’Neal’s defense attorney, of the negotiations. “We like to go to hearings, and we like to have findings of actual innocence or the trial set aside or a conviction set aside and a new trial given, but in this case I talked to Mr. O’Neal on several occasions.

“He’s in his early 50s now, and the opportunity to be home and take care of his elderly mother is something that is very important to him. And so when the offer was made, he considered it a long time and decided that this is what he would do.”

Elreno O’Neal was in tears as she embraced her son while he spoke during a news conference that coincided with his release from jail, which had been slightly delayed while officials tracked down the necessary paperwork.

“God is the reason for this. I’ve been praying since ’02, morning, noon and night, for this boy. And God heard my prayers, and he’s coming home,” Elreno O’Neal said.

Willard O’Neal said he coped with his incarceration by remembering to focus on reuniting with his mother and the rest of his family, as well as by helping his legal team.

“Everything else is irrelevant. She’s who I want to come home to. She’s all I’ve got, me and her,” he said of his mother. “I’m an only child. This is what helped keep my head straight, kept me focused to get home each and every day.”

The Oklahoma Innocence Project considered O’Neal’s case among those of potential interest when it opened its clinic in 2011, and the group filed O’Neal’s first application for post-conviction relief in 2015. The work by Behenna, OKIP legal administrator Cheryl Burns and investigator Tiffany Gobble eventually led to DNA testing on items collected at the crime scene, such as a beer bottle, a bloody tissue, bloody eyeglasses, .22-caliber shell casings and a money bag.

Court documents state that results from the Oklahoma State Bureau of Investigation indicate that the agency did not find O’Neal’s DNA on any of the items and in fact excluded him as a contributor on tested items with partial or complete DNA profiles.

Behenna also said a key prosecution witness owned the weapons used during the shootings, which apparently occurred during a robbery. She added that evidence suggests that the same witness tried to solicit someone to commit the crime weeks before it occurred.

That information, she said, was not provided to O’Neal’s trial counsel in a timely manner, nor was information about a trespassing complaint Chamberlain made against two other people about three weeks before his death.

But Tulsa County District Attorney Steve Kunzweiler said he thinks recent allegations in O’Neal’s case have allowed “revisionist history” to override the decision of the jury that found O’Neal guilty, a decision upheld on direct appeal. He said he was concerned that attorneys can “come up with some area that might be challengeable” years or even decades after a case is closed in hopes of persuading “one person to make a decision that isn’t fully, in my opinion, vetted.”

However, Behenna said she thought O’Neal’s conviction was the result of a lack of full disclosure of evidence that could have potentially helped his defense.

“I’ve got to be cognizant of what the risks are for the future,” Kunzweiler said. “If I were the family, I’d be really mad about this dynamic that’s kind of unfolded. And they’ve got a right to be mad. But I’ve got to look at the circumstances that I face today and try to hold that person accountable.

“Make no mistake, Mr. O’Neal, once he’s finished with his plea, he’s still a murderer. He’s getting a punishment that I don’t think is consistent with what the jury heard back in 2004, but he walked out of the courthouse and out of the jail convicted of murder.”

O’Neal simply pointed to his mother when asked why he accepted a plea deal. Behenna said O’Neal even told her during their first meeting that his primary goal was getting home to her.

When asked Thursday afternoon about what else he’s looking forward to following his release, Willard O’Neal said he is glad he now has the chance to enjoy home-cooked meals.

Willard O’Neal kisses his mother, Elreno O’Neal, while reporters interview his attorneys after his release from incarceration on Thursday. He spent 17 years in jail or prison for a first-degree murder conviction that was vacated due to the help of the Innocence Project. IAN MAULE/Tulsa World

Willard O’Neal hugs his mother, Elreno O’Neal, while reporters interview his attorneys after his release from incarceration on Thursday. He spent 17 years in jail or prison for a first-degree murder conviction that was vacated due to the help of the Innocence Project.

Willard O’Neal kisses his mother, Elreno O’Neal, at the Tulsa County jail after his release on Thursday. He spent 17 years in jail or prison for a first-degree murder conviction that was vacated due to the help of the Innocence Project. IAN MAULE/Tulsa World