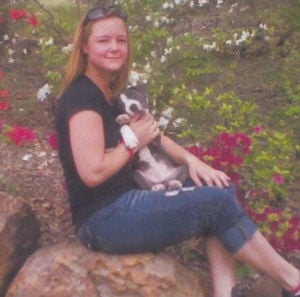 Amanda Marie Douglas, 26, was killed in the parking lot of the Bristol Park Apartments on Nov. 26. Courtesy

Amanda Douglas’ father is confident he knows who killed his daughter, and he believes it’s the same man his daughter filed three petitions for protective orders against within the last year.

Larry Oscar Douglas Jr., Amanda’s husband, is an obvious person of interest in the case, police said, but they’ve found no evidence linking him to the crime.

Amanda Marie Douglas, 26, and Jennifer Lynn Sudar, 37, were gunned down in the parking lot of the Bristol Park Apartments, 4414 S. Garnett Road, on Nov. 26.

“They’re blaming me for something I didn’t do, you know, and that’s basically it,” Douglas told the Tulsa World in a telephone interview.

Amanda Douglas petitioned for a protective order against her husband six days before her death. In the document, she wrote Larry Douglas Jr. grabbed her by her arms and threw her down, causing her to pass out, when she tried to walk away from an argument on Nov. 9.

“Somehow I got away and I had to walk around six miles to get somewhere safe and have someone come get me,” she told the court.

She was granted an emergency protective order, her third against Larry Douglas since February, but was slain before a Dec. 3 hearing for a final order of protection.

“She was scared to leave him, definitely,” said Michael Drywater, Amanda’s father who lives in Pryor, in an interview with the World.

Court records show she also sought protective orders on Feb. 27 and June 23, alleging he had physically, mentally and emotionally abused her over the past five years, including choking her while she was pregnant.

Drywater confirmed the threats. The family met for a meal at a barbecue restaurant in recent months when Larry Douglas “showed up.” He allegedly tried to hit her and take their infant daughter, Drywater said.

“He told us then that he’d have us all taken out, so I do know he has something to do with it,” Amanda’s father said of her death. “He said too many times that he knew too many people (and) that he would take our whole family out.”

Amanda Douglas left the courtroom before a final protective order hearing could be held after the June petition. Case notes show she first asked the order be dismissed but changed her mind after speaking to a courthouse Domestic Violence Intervention Services advocate. She was then asked to wait in the courtroom to testify but left.

The February order was dismissed when neither Amanda nor Larry Douglas appeared for the final order hearing.

Prosecutors charged him with domestic assault and battery by strangulation and domestic assault and battery in the presence of a minor child twice after the alleged February assault but requested the charges be dismissed when Amanda Douglas failed to testify against him both times. The District Attorney’s Office said had they left either case open, a judge would have eventually dismissed it with prejudice, which would prohibit the state from trying the case at a later date should the victim decide to testify.

Larry Douglas maintains “there was no violent history” between him and his wife, except an occasion when she allegedly attacked him, and that filing protective orders against him and his ex-wives was a game to her.

Two orders filed against Douglas’ ex-wives were dismissed in March due to insufficient evidence. Both petitions allege the women were trying to take custody of the couple’s then 3-month-old daughter.

One of them, Misty Douglas, told the Tulsa World “Larry loved Amanda and wanted her to get help for her drug problem.”

Larry Douglas married Amanda in Fort Smith, Arkansas, on March 18, 2013, but filed for divorce less than seven weeks later. He also filed a motion for his then-pregnant wife to be drug tested and requested temporary possession of all their belongings.

A process server hired by Larry Douglas’ attorney was unable to find Amanda Douglas and serve the divorce petition, which apparently stymied the case until her February 2014 protective order filing.

Amanda Douglas would later tell the court Larry Douglas held her captive at their home and lied about not knowing her whereabouts.

Larry Douglas was granted temporary custody of their daughter in August after he submitted an affidavit detailing neglect allegations against his wife. He said she took the baby from their home and left her with people he described as “parties unknown” to him, for a couple of nights. He also alleged she had a history of illegal drug use and that she had been arrested days earlier on an outstanding criminal felony warrant.

Wagoner County court records show she failed to pay costs after receiving a two-year deferred sentence in a 2006 case for a vandalism charge listed as “molesting an automobile,” which resulted in a guilty finding in the case by the court. State court databases showed no additional criminal cases against her and she did not have an arrest history with Tulsa police.

On Nov. 13, less than two weeks before her death, Amanda Douglas followed suit and filed for emergency custody of her daughter.

The custody motion repeats the protective order allegations of physical and mental abuse by her husband, as well as unsecured firearms in the home, drug use and drug distribution by Larry Douglas. A judge requested the Department of Human Services review both parents’ motions for emergency custody and delayed ruling until a Nov. 24 hearing, sources said. The DHS report had not been completed so no action was taken at that time and the baby remained in Larry Douglas’ custody.

Larry Douglas said he’s confident he would have been awarded custody of the girl, who turned one on Dec. 3 — the same day Amanda Douglas was buried.

Her father said “if she was (on drugs), it was because he was giving them to her.”

“As long as she stayed away from him, she (did) great but he had something over her,” Drywater said.

Larry Douglas has been cooperative with police, providing his DNA and fingerprints on Dec. 1, he said and records confirmed. He also said Amanda spent the weekend before her death at his house.

Sources close to Amanda Douglas said she did not see Larry that weekend but stayed with his cousin, who was caring for the baby.

“I have nothing to hide,” he told the World. “All I want to do is raise my daughter. I miss my wife. I would never want my wife to be dead.”

Tulsa homicide detectives said Larry Douglas is one of many people under investigation in connection to the double homicide.

“He has not been cleared by any stretch of the imagination, but he’s not been charged because we haven’t found anything to say he did it,” Sgt. Dave Walker said.

He said either way, whether he was or was not involved in the killings, investigators don’t think Larry Douglas was the shooter.

Larry Douglas’ arrest history shows he was jailed by Tulsa police on complaints of possessing cocaine in 2006, selling cocaine in 2003 and two separate assaults in 2002. He was charged in the assault cases, once with shooting with intent to kill and once with assault and battery with a dangerous weapon, but the cases were dismissed.

He and his brother were charged with shooting at a man and his family after a car chase from Eighth Street and Peoria Avenue to near Florence (111th) Street and Aspen Avenue in Broken Arrow in January 2002, records show. That case was “dismissed at the request of the state” but the District Attorney’s Office wasn’t immediately able to clarify why.

The brothers were accused of beating a man using a crowbar and a stick in October 2002, but the victim failed to appear in court resulting in that case’s dismissal.

Homicide detectives are still seeking a key piece of evidence in the murders: a gold, four-door 2006 Pontiac Grand Prix bearing Oklahoma license plate 231GDS. The car was reported stolen the day before the homicides and was captured in the area by the apartment complex’s surveillance system at the time the women were killed.

Anyone with information about the shooting deaths of Amanda Douglas and Jennifer Sudar can contact homicide detectives at,

Last year, a Customs and Border Protection officer intercepted a package containing more than a kilo of heroin that was headed to Shane Wright's home.

A federal judge ruled that the U.S. Constitution’s prohibition against multiple prosecutions for the same offense doesn’t apply in Shannon James Kepler’s case.

Detectives said they believe the assailants' "distinctive clothing," along with distinctive skin markings on the gunman's left hand, will aid with identifying those responsible.

Man sought in first Tulsa homicide of the year

Kent Kierston "Cowboy" Payne, 35, is charged with first-degree murder in the Jan. 5 killing of Donza Settles in north Tulsa.

Emergency responders were called about a possible overdose and unsuccessfully attempted to revive the victim. Police officers arrested Darrick Willis, 34, who had stayed at the scene.

Amanda Marie Douglas, 26, was killed in the parking lot of the Bristol Park Apartments on Nov. 26. Courtesy