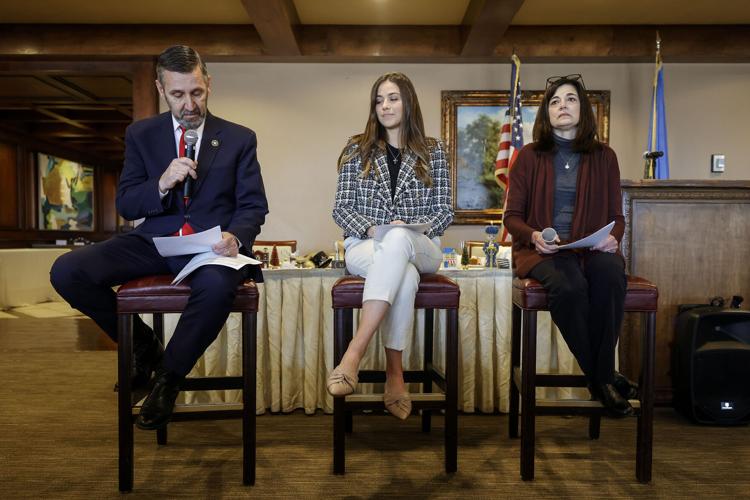 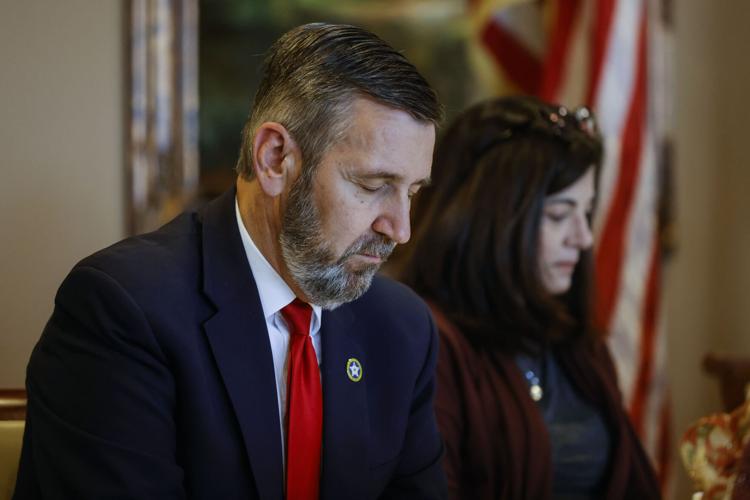 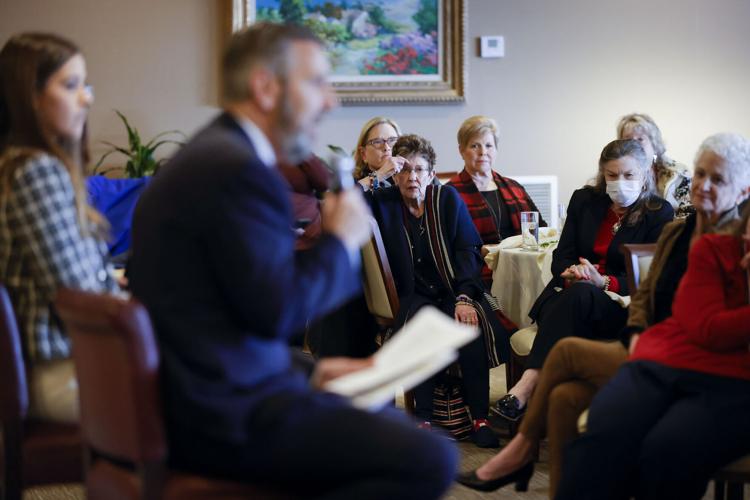 Tulsa County District Attorney Steve Kunzweiler and is family talk to the Republican Women’s Club of Tulsa County on Tuesday about the state's need to address mental health treatment.

There were only a few short years between Dr. Christine Kunzweiler’s reflecting on how grateful she was to have three “happy and healthy” daughters and recognizing that something was “terribly wrong,” she said.

The veterinarian and wife of Tulsa County District Attorney Steve Kunzweiler spoke publicly for the first time Tuesday alongside her recovered husband and youngest daughter at a monthly meeting of the Republican Women’s Club of Tulsa County.

The Kunzweilers’ middle daughter, Jennifer, was arrested in late September on an allegation that she stabbed her father twice during a psychotic episode outside their home.

The 31-year-old has been charged with domestic assault and battery with a deadly weapon and planning, conspiring or endeavoring to perform act of violence. Prosecuted by Wagoner County District Attorney Jack Thorp and represented by Allen Smallwood, she has a non-jury trial slated for Jan. 27.

Although plunged into one of the most “difficult” experiences of their lives, the Kunzweilers said they stepped into the spotlight to bring attention to the far-reaching but stigmatized issue of mental illness. Standing before a gaggle of reporters at a press conference on the day after his stabbing, Steve Kunzweiler decried the state Legislature’s lack of response to an “exploding” mental health crisis.

Nearly four months later, Steve Kunzweiler said not much has changed by way of the state’s leaders.

Praising Gov. Kevin Stitt’s “good stewardship” in achieving a $2.8 billion Rainy Day Fund — a savings four times higher than the state has ever recorded available for emergency use — Steve Kunzweiler questioned what constitutes an emergency.

“When the streets of Oklahoma are occupied by throngs of homeless whose mental health issues are showing up at the courthouse steps in the form of public safety issues, that sounds like an emergency to me,” he said. “When our Department of Mental Health has a waiting list to deal with the placement of the mentally ill in a facility that’s designed to keep them safe as well as the public safe, that sounds like an emergency to me.

“When suicide rates are on the rise as much as 4% over the last year, that seems like an emergency to me.”

Much like his speech during his last news conference, he begged “the people who are in charge of the purse strings” to personally educate themselves on the issue, “get skin in the game” and understand what it’s like for his family and so many other Oklahomans.

He suggested several solutions to counter the lack of long-term treatment options in a system solely focused on stabilization and the increase in self-medication and suicide, including building adequate treatment facilities for mentally ill people, focusing resources on in-patient and out-patient care, and expanding across the state the kind of emergency mental health services now available in urban centers such as Tulsa.

“Oklahoma — America — we can do better,” his wife, Christine Kunzweiler said. “I know we can; I’ve seen it.”

Steve Kunzweiler’s voice broke with emotion as he asked the crowd, “first and foremost,” to pray for his daughter, Jennifer Kunzweiler.

Noting that his middle child doesn’t deserve what she’s going through, the father called his daughter a victim of “horrific” domestic violence in a romantic relationship he said stripped her of her self-esteem. She began struggling with mental illness shortly thereafter, the family said.

In recalling the night she knew something was “terribly wrong” with her daughter, Christine Kunzweiler suggested that listeners watch the movie “A Beautiful Mind,” which depicts the story of John Forbes Nash Jr., a brilliant mathematician who had severe mental illness.

“In one scene the main character was looking repeatedly between the shades for someone he thought was after him,” Christine Kunzweiler said of the movie. “My daughter woke me up in the middle of the night one evening, and that scene played out almost exactly like that movie.”

It was the event that began her family’s long journey into mental health care, she said, and she discovered that, through no fault of their own, the workers who provide treatment to mentally ill people are frequently short-staffed and lack the facilities necessary to treat their patients, often being forced to triage cases to the point that they can provide only the most basic of services for the most seriously affected.

“Even in those scenarios, it usually requires a patient to say the magic words — ‘I’m thinking of killing myself’ or ‘I think I’m going to hurt someone’ — to get any help,” Christine Kunzweiler said. “If those words are not spoken, then there is a great reluctance to move forward. Often times it results in a, ‘I’m sorry. I don’t have enough to go on to hold this person against their will despite the family or friends’ insistence that they know better because of past experiences.’”

Christine Kunzweiler encouraged research and conversation to help the loved ones of people who have mental illness to cope with and understand their struggles. She said she has gained much compassion, support and understanding from resources offered by the National Alliance on Mental Illness, such as classes and support groups.

“So many of us deal privately with this disease because of the stigma,” she said.

Acknowledging the kindness friends and others showed her family in the aftermath, Christine Kunzweiler noted that one “cannot help but feel the whispers of people wondering what the parents did wrong to create the situation” or hear the questions of why mentally ill people “don’t just take their meds” and assertions that they only need some “tough love.”

Mental illness is an uncomfortable and complex topic, Christine Kunzweiler acknowledged, “but we have to ask ourselves: ‘What is it costing us to not move to a better mental health care system and a better criminal justice system for these people?’”

Easily and posthumously recognizable as one of the world’s greatest artists, van Gogh painted “Starry Night” from inside an asylum as he sought treatment for mental illness, she said — a fact few recognize.

“Clearly, Van Gogh had something to offer the world,” Jackie Kunzweiler said. “The moment that we stop being indifferent to people like Vincent van Gogh and my sister is the moment that we will see their value and contributions come to light.

I write because I care about people and peace, and I believe the most informed people make the best decisions. I joined the Tulsa World in 2019 to cover breaking news, and I currently cover crime and courts. Phone: 918-581-8455

Phillip Barry Albert is a former president of Pelco Structural LLC in Claremore and was a member of the University of Oklahoma Board of Regents from 2016 to January 2022, when he resigned.

Fired from Tulsa County not long after the theft was discovered, Michael Bonin was hired at the Osage County Sheriff's Office and is currently suspended from his job there.

Appellate judges agreed that Matthew Hall's conviction on two counts of accessory to a felony constituted "double punishment" for his role in the June 2020 traffic-stop shooting of two Tulsa police officers.

Diane Carpenter, 66, and Kenneth Carpenter, 56, reportedly lived together at the south Broken Arrow residence where officers found them both dead Thursday.

Oklahoma County's sheriff said deputies and officers cannot, under state law, enforce a rule established by the Justice Department, as opposed to a federal law established by Congress.

Police are investigating Broken Arrow's first homicide of the year.

Tulsa County District Attorney Steve Kunzweiler and is family talk to the Republican Women’s Club of Tulsa County on Tuesday about the state's need to address mental health treatment.