Rams vs. Cardinals: Updates and scores from the NFL playoffs

Former Tulsa Police Officer Shannon Kepler was sentenced Friday to serve 25 years in federal prison, overruling requests that he be freed based on the amount of time he has already served for the 2014 killing of his daughter’s new boyfriend, Jeremey Lake.

During a hearing in Tulsa federal court, U.S. District Judge Gregory Frizzell brushed aside the time-served request and opted to go with a prison term within federal sentencing guidelines.

Federal sentencing guidelines called for Kepler to serve 292 months (a little over 24 years) to 365 months (about 30½ years) in prison after a jury in April found him guilty on a murder-related charge.

Frizzell said little after pronouncing judgment on Kepler, other than to agree with a prosecutor who said there were no winners in the case. In addition to the prison time and three years of supervised release, Frizzell ordered Kepler to pay for a headstone for Lake’s grave at his father’s request.

A federal jury found Kepler guilty in April on two of three felony charges, acquitting him of first-degree murder but convicting him on one count of using a firearm while committing second-degree murder and one count of assault with a deadly weapon in connection with shots fired at another person during the encounter with Lake.

Frizzell threw out the assault conviction after the trial.

“Nineteen-year-old Jeremey Lake died almost immediately after Shannon Kepler gunned him down in the street in 2014,” U.S. Attorney Clint Johnson said in a statement after Friday’s sentencing.

“Kepler, at the time, was sworn to uphold the law but instead made a series of decisions that led to the young man’s murder. Today’s 25-year sentence provides a measure of justice to Mr. Lake’s family, though I know their healing continues. It also serves as a reminder that the U.S. Attorney’s Office and our law enforcement partners will hold individuals accountable for acts of violence in our community.”

The 2017 state trial conviction for heat-of-passion manslaughter and 15-year prison term Kepler received in Tulsa County District Court were overturned after he successfully argued that the state didn’t have the jurisdiction to prosecute him under the U.S. Supreme Court’s July 2020 ruling in McGirt v. Oklahoma.

That ruling determined that Congress had never disestablished the Muscogee Nation reservation, leaving much of Tulsa within the jurisdiction of federal or tribal officials when dealing with major crimes that involve Native Americans.

Prosecutors contended Kepler fatally shot an unarmed Lake twice after the two met briefly in a street near where he and Kepler’s daughter, Lisa Kepler, were staying.

Kepler, now 61, claimed he was looking for his daughter at the time when he encountered her with Lake, 19. He claimed that Lake brandished a gun just before Kepler shot him.

No gun was found on or near Lake following the shooting, and no witness other than Kepler claimed to have seen Lake armed before the encounter.

About a week earlier, Shannon Kepler had dropped Lisa Kepler, then 18, at a downtown homeless shelter with no food, money, cellphone or clothes other than what she was wearing at the time, all as punishment for what she said at the time were poor “life decisions.”

Shortly afterward, Lisa Kepler met Lake, who offered to let her live at his aunt’s home with him.

That is where Shannon Kepler encountered the two after looking up Lake’s address on police computers.

Kepler fled after shooting Lake but later surrendered to authorities.

Much of Friday’s hearing was spent on two factors that determined Kepler’s recommended sentencing range.

Prosecutors on Friday agreed with a U.S. Probation Office presentencing report that said Kepler’s use of police resources to determine where Lake lived and his decision to testify that he shot in self-defense were factors that warranted a heightened sentence because he violated a position of trust and he obstructed justice.

A government sentencing memo co-authored by Assistant U.S. Attorney Ross Lenhardt disputed Kepler’s claims that his trial testimony was not “necessarily false” and therefore could not constitute obstruction of justice.

“The jury was instructed that they absolutely could not convict Kepler of intentional murder if he was acting in self-defense,” the government stated.

Kepler, in court papers filed on his behalf, argued that his testimony was instrumental in gaining an acquittal on the first-degree murder count.

Frizzell sided with the government that using police resources to determine where Lake lived increased his sentencing range, but he disagreed that Kepler’s decision to testify in his own defense constituted obstruction of justice.

Frizzell also overruled a request that Kepler be sentenced to time already served.

Stan Monroe, Kepler’s attorney in the federal trial, listed reasons for releasing Kepler based on the time he has already served in relation to the crime.

Monroe noted that the 24-year veteran of the Tulsa police force had an “impeccable” work record prior to the killing.

Monroe also wrote in the sentencing memo that Kepler has suffered stress and anxiety from undergoing four state trials and one federal trial, while also being held in solitary confinement since being found guilty to protect him from other inmates due to his law enforcement background.

Kepler was free on bond prior to being convicted.

During the hearing, Kepler said he regretted that Lake “lost his life.”

Kepler said if he could go back in time and “change things,” he would in a “New York minute.”

He thanked his family for sticking by him during the trial and said he prayed every day to God for both his family and Lake’s family.

Government attorneys, meanwhile, urged Frizzell to sentence Kepler within the guideline range of 24 to 30 years in prison.

A handful of victims’ impact statements, including one from Lake’s father, were presented during the hearing.

Carl Morris told the judge that he was deeply depressed after his son was killed.

“The last thing he ever said to me was, ‘I love you, Dad,’” Morris said. “I will never get to hear him say that again.

“I feel like there is a hole in my life that can never be filled.”

Morris asked that Kepler be ordered to pay for a headstone for his son’s grave, which is currently bare.

He asked that Frizzell sentence Kepler to either life in prison or death, although the latter was not an option for the judge.

“I humbly ask that you make an example out of him,” Morris said.

Kepler’s attorney indicated during the sentencing hearing that his client planned to file an appeal in his case. 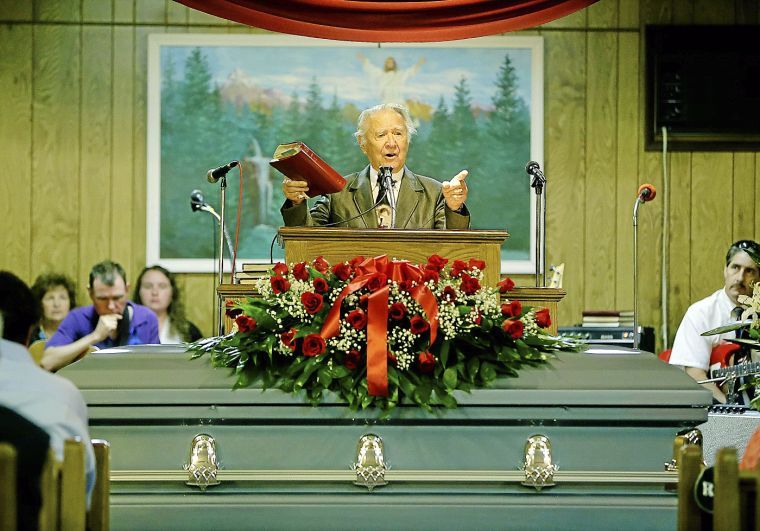 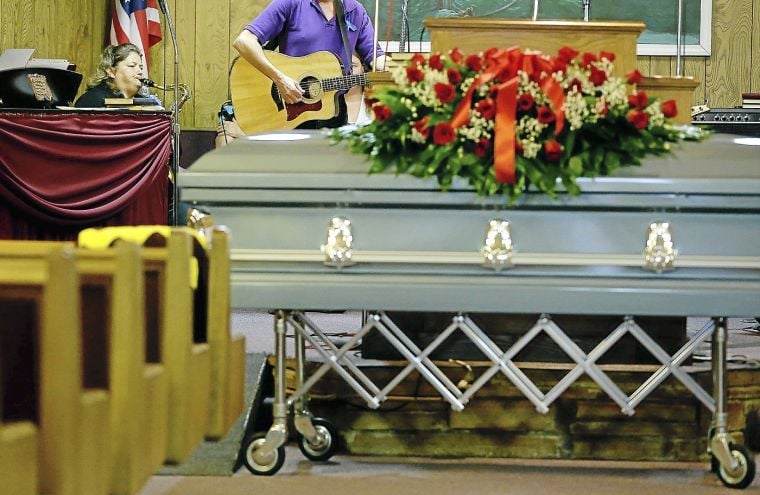 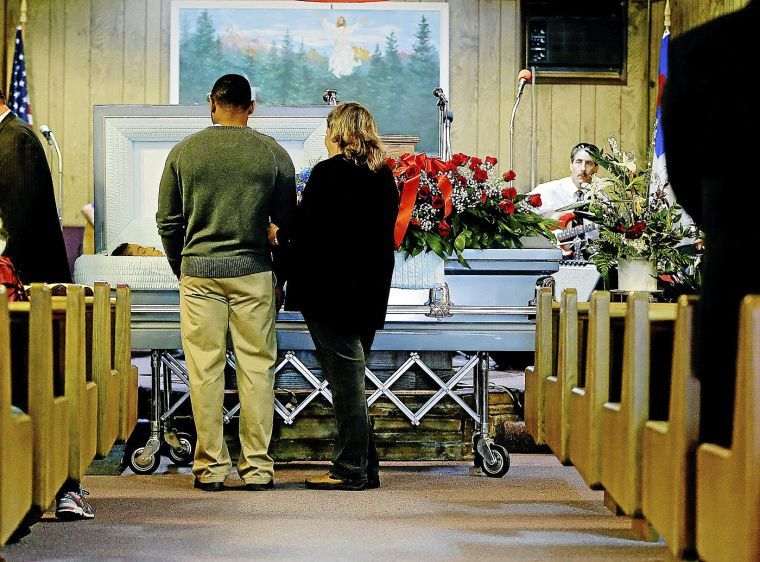 Jeremey Lake's aunt Pam Wilkins and an unidentified mourner pause at his casket during his funeral on Aug. 13, 2014. MIKE SIMONS/Tulsa World 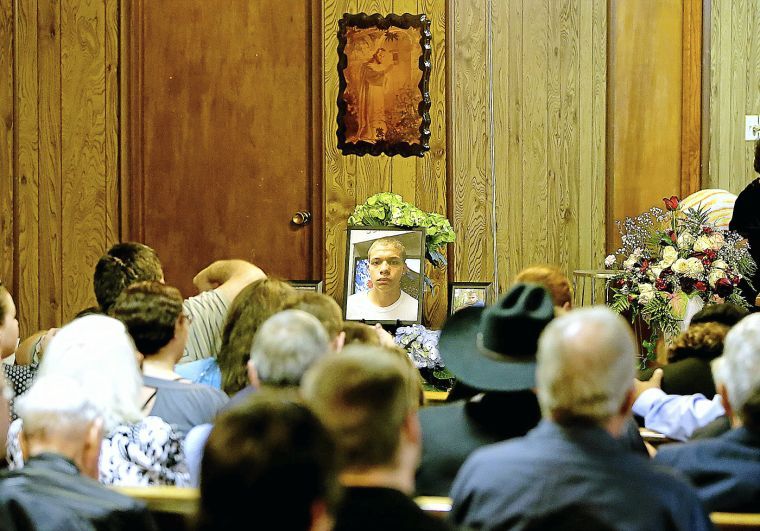 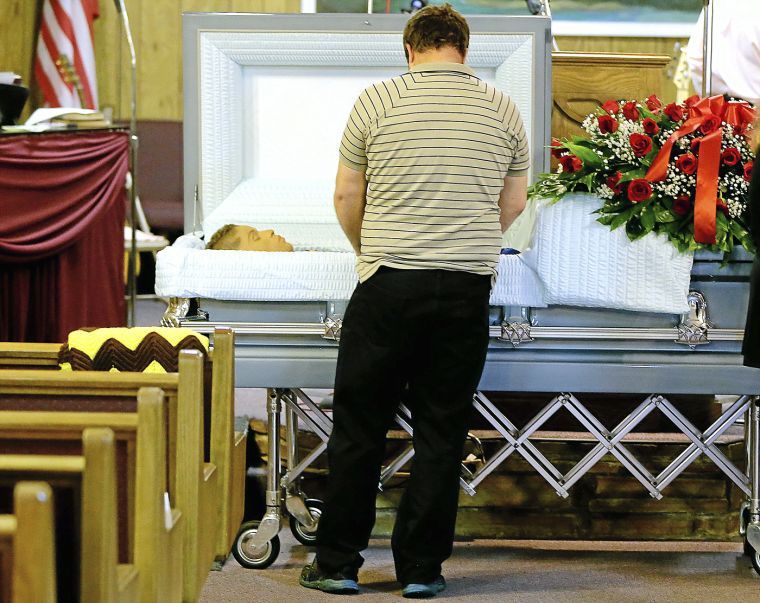 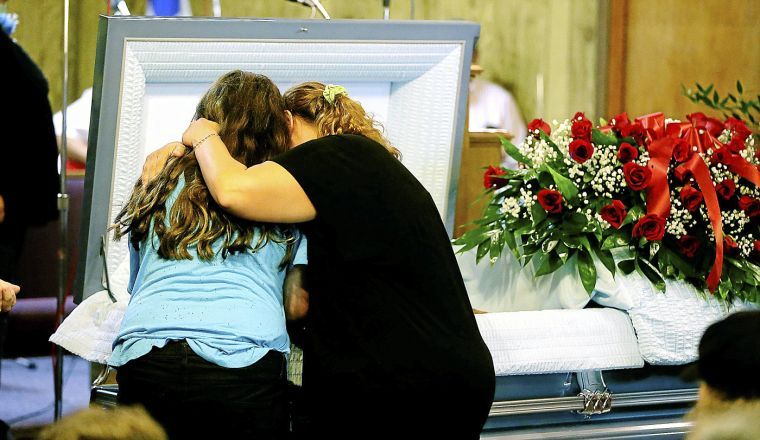 Mourners pause at the casket during a funeral for Jeremey Lake Aug. 13, 2014. MIKE SIMONS/Tulsa World 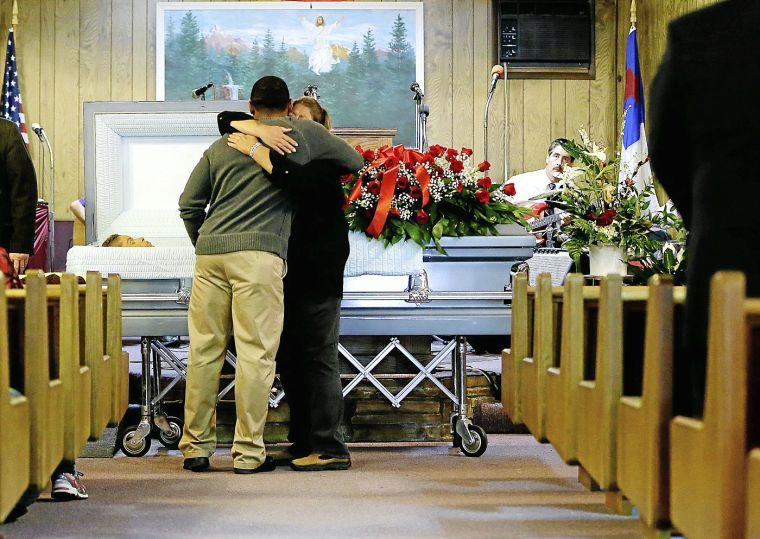 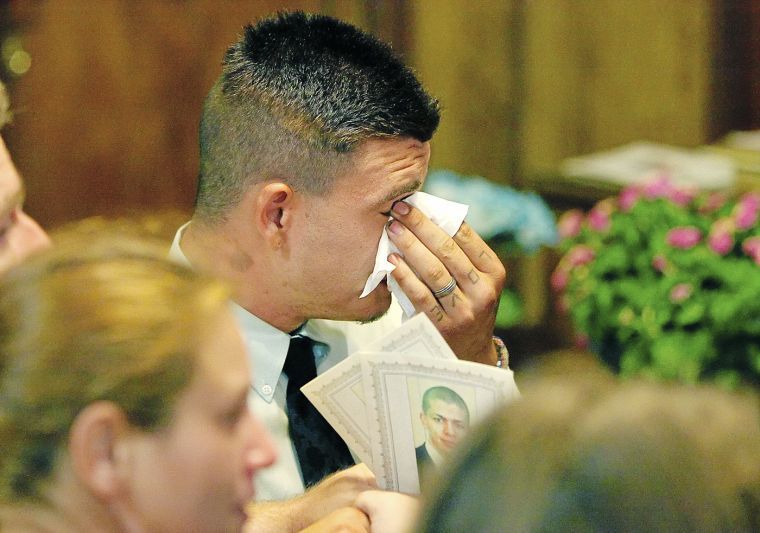 Josh Mills wipes a tear away during a funeral for his friend Jeremey Lake Aug. 11, 2014. MIKE SIMONS/Tulsa World 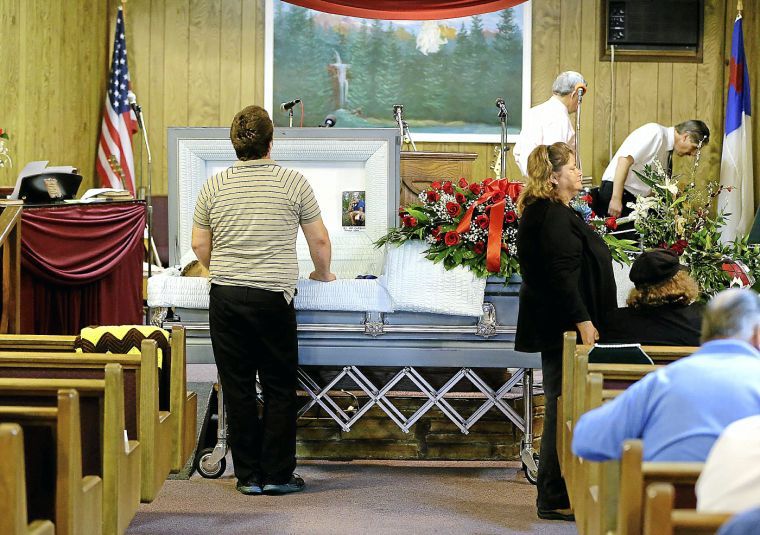 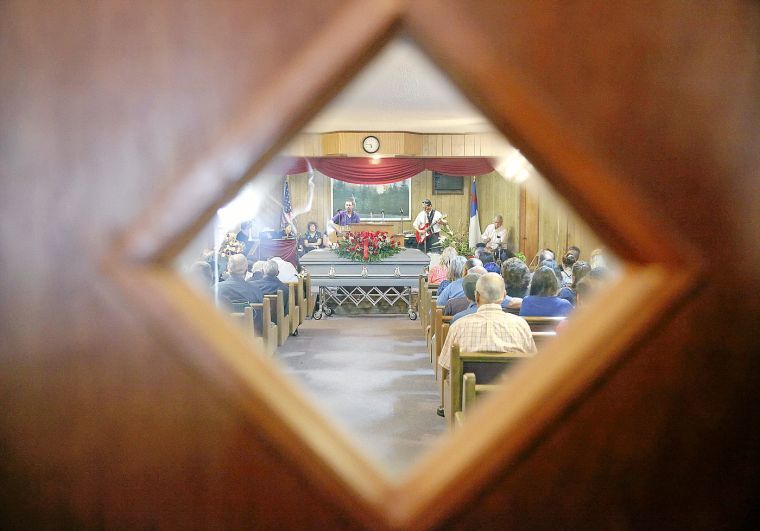 The casket is seen through the window of Dawson Freewill Baptist Church during a funeral for Jeremey Lake Aug. 13, 2014. MIKE SIMONS/Tulsa World 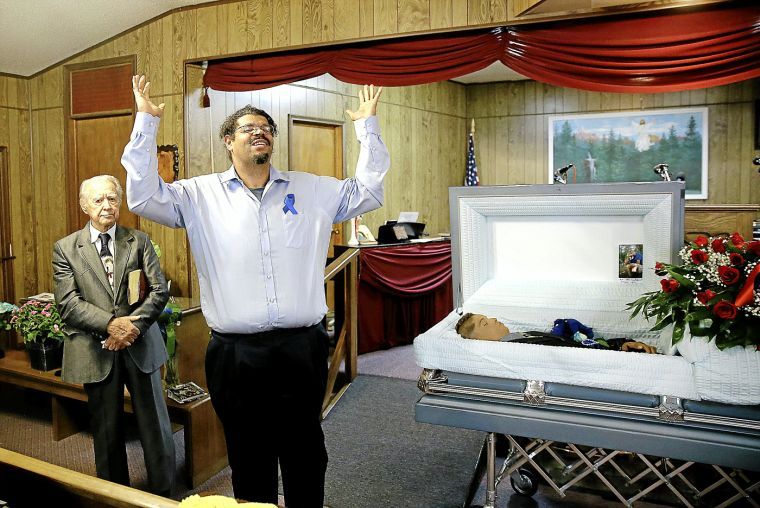 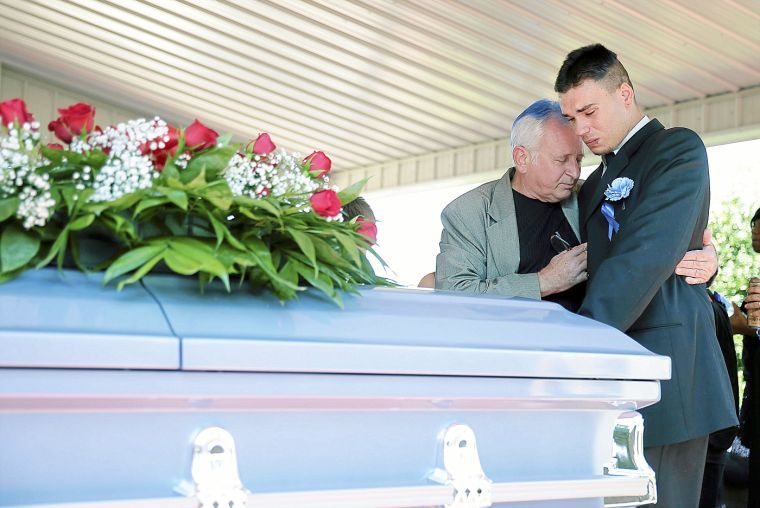 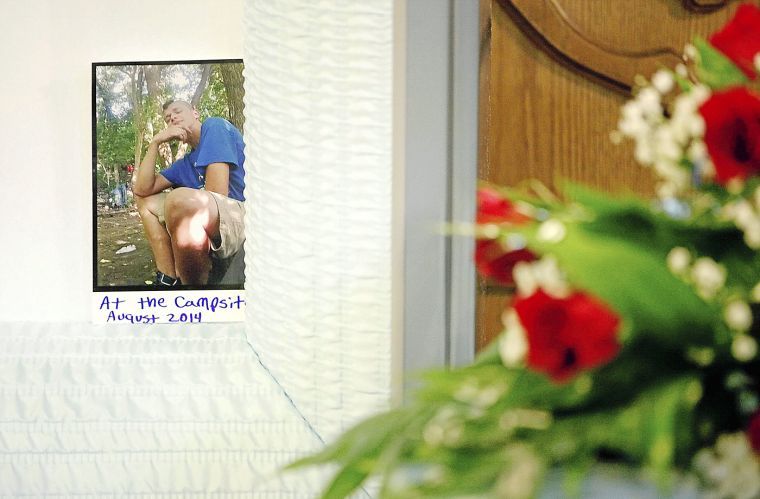 A photo of Jeremey Lake at "the campsite" is tucked in his casket during his funeral Aug. 13, 2014. MIKE SIMONS/Tulsa World 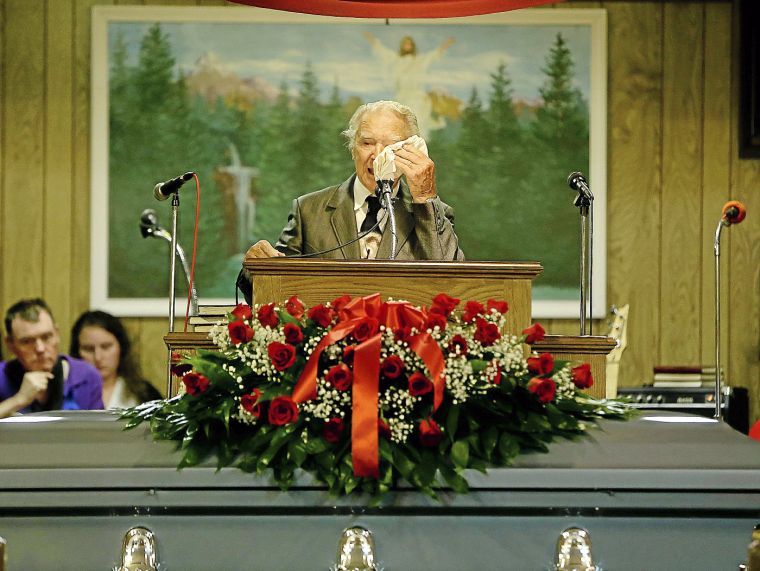 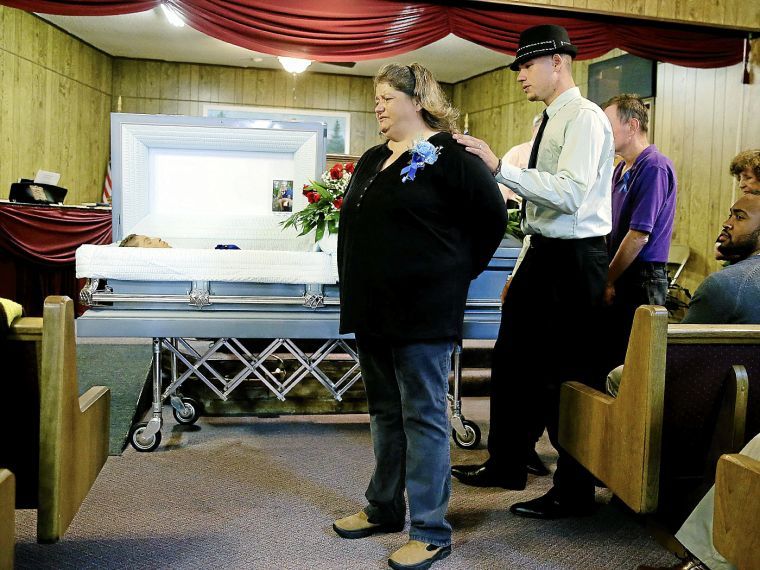 Jeremey Lake was shot and killed Tuesday outside his brick home in the 200 block of North Maybelle Avenue. Shannon Kepler, 54, an off-duty police officer, was arrested hours later. No motive for the shooting has been released by authorities, who've only said that Lake was dating Kepler's adopted daughter.

Jeremey Lake's aunt Pam Wilkins and an unidentified mourner pause at his casket during his funeral on Aug. 13, 2014. MIKE SIMONS/Tulsa World

Mourners pause at the casket during a funeral for Jeremey Lake Aug. 13, 2014. MIKE SIMONS/Tulsa World

Josh Mills wipes a tear away during a funeral for his friend Jeremey Lake Aug. 11, 2014. MIKE SIMONS/Tulsa World

The casket is seen through the window of Dawson Freewill Baptist Church during a funeral for Jeremey Lake Aug. 13, 2014. MIKE SIMONS/Tulsa World

A photo of Jeremey Lake at "the campsite" is tucked in his casket during his funeral Aug. 13, 2014. MIKE SIMONS/Tulsa World

Dean Stith, 55, was found incompetent to stand trial in a 2020 felony case primarily due to dementia, according to court records, but he was jailed again in December on a complaint of falsely reporting a crime.

A Tulsa man has been charged with manslaughter on allegations that he was under the influence of alcohol when he caused a wreck, that killed one of his passengers last summer.

Dillon Rose, 30, was sentenced to 30 years in Tulsa County District Court in 2018 on charges of kidnapping and robbery after Jason Harris, 38, was found shot to death in the front passenger seat of a vehicle on the shoulder of U.S. 169. The federal charge is related to that homicide.

According to statements he made to police, Nicholas Johnson's jealousy of his girlfriend's relationship with another woman spurred plans to take Sarah Maguire's life.

Most released due to McGirt have been charged either federally or tribally, Tulsa World analysis finds

The majority who saw their state convictions overturned have been prosecuted in federal or tribal courts, according to DOC records provided upon an Open Records Act request.

Two arrested in Texas are charged with murder in Tulsa homicide

The charges accuse sister and brother Lilie Crawford, 21, and Rashawn Graham, 24, of fatally shooting Nickolas Norwood, 30, during a drug deal at the Oakley Apartments in north Tulsa about midnight Tuesday.

Andrew Stevens will, however, serve 10 years in Department of Corrections custody for possessing a firearm after former conviction of a felony.

Two arrested in beating death of woman, 29, at her Tulsa home

Sarah Maguire reportedly knew the man and woman arrested in her slaying: Brinlee Denison and Nicholas Johnson, who were arrested when found with her vehicle in Arkansas.