Attorney Winston Connor II and his attorney, Clark Brewster, walk out of the Tulsa jail in 2019. Connor will face a jury trial on racketeering and witness tampering charges, a judge ruled Thursday. 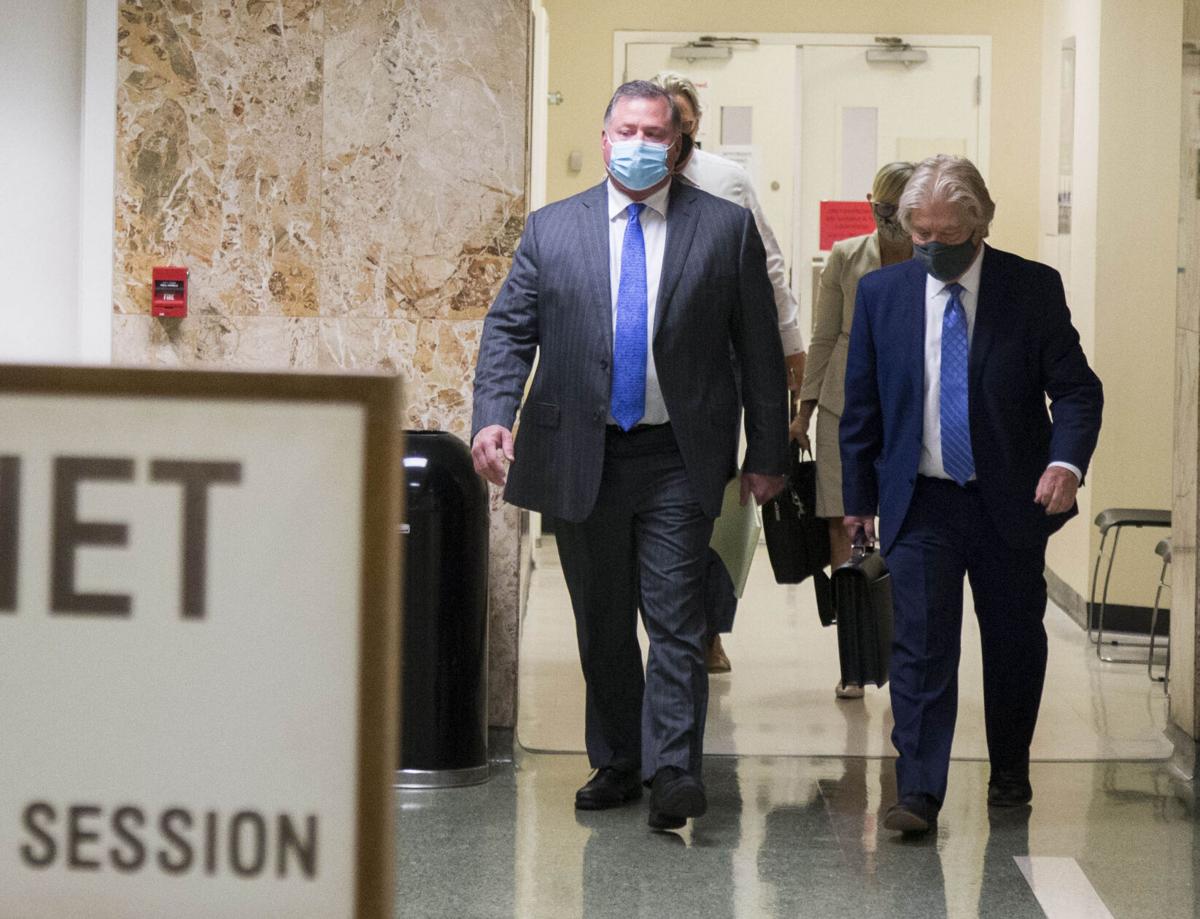 Winston Connor walks through the Tulsa County Courthouse with his attorney Clark Brewster on Monday.

Editor's note: The version of this story that was published in Friday's Tulsa World newspaper incorrectly reported that a felony charge of conspiracy to distribute a controlled substance was upheld at the preliminary hearing. This version of the story has been corrected.

A Tulsa County judge dismissed a murder solicitation charge against a Delaware County attorney after finding insufficient evidence in his contact with one of his incarcerated clients, but the judge left intact counts of witness tampering and racketeering.

The latter charge ties him to legal representation of women who worked in Tulsa’s sex industry.

Oklahoma’s multicounty grand jury returned an indictment against attorney Winston Connor II in 2018 on 10 charges, the most serious of which were solicitation for first-degree murder and a violation of the Racketeer Influenced and Corrupt Organizations, or RICO, Act.

In opting to dismiss two of the counts, Special Judge April Seibert said recordings of communications between Connor and Slint Tate — a Grove man serving life without parole for a 2001 Rogers County murder — did not meet the legal burden of intent to solicit a homicide.

“While that conversation causes the court great concern, that is not the burden,” Seibert said, adding that “the court can’t infer that intent” based on what she was able to hear.

Similarly, she dismissed a charge alleging that Connor received proceeds “known to be derived from an illegal activity” of prostitution, saying, “I don’t find that giving advice to his clients not to discuss unlawful matters with the IRS” amounts to an attempt to obtain unlawful funds from them.

Several of the women, who themselves are charged with racketeering in separate cases, testified against Connor on Monday.

In finding probable cause for racketeering, Seibert said there was evidence that Connor was a lawyer for and a client of the Tulsa-based massage businesses’ employees between roughly 2010 and 2018 while being aware they largely offered sex acts for money.

She noted testimony from one woman who said she would periodically see “miscellaneous” charges on the books that were payments to Connor around the same time employees got into legal trouble after police raids.

Seibert upheld related felony counts including pandering and committing a pattern of criminal offenses, including solicitation of prostitution, between January 2012 and August 2016.

Connor is additionally accused of committing felony assault in Pittsburg County — or conspiracy as an alternative charge — “while acting in concert” with Tate, an unindicted co-conspirator, when a man named Dakota Brown was hit in the face with a belt in May 2016.

He and Paul DeMuro, who also represents Connor, also elicited testimony from at least one employee who said she was satisfied with Connor’s legal assistance because he discovered that surveillance footage contradicted what police claimed took place.

The attorneys got at least some of the evidence related to Tate tossed after Seibert said she did not hear anything that clearly indicated solicitation for murder, though she acknowledged that the two communicated using a phone Tate obtained illegally.

The Tulsa World obtained recordings in 2017 of Tate and Connor speaking to each other from Kenny Wright, the district attorney for Delaware and Ottawa counties.

“They seized 10 million files from his office and his home and recovered nothing — because there was nothing,” Brewster said in court Thursday.

Legal debates over those documents, along with halts in court cases related to the COVID-19 pandemic, resulted in a two-year wait between the charges and Connor’s preliminary hearing.

In approving the witness-tampering charge, Seibert said what she heard between Connor and Cori Stotts crossed “the line in the sand” beyond legal advocacy for Stotts’ estranged ex-husband, Bryan Moore. She said testimony indicated that Stotts and her boyfriend were told they needed to “drop the charges” against Moore, who was accused of burglary in Ottawa County and whom Connor represented.

Tulsa County Assistant District Attorney Kenneth Elmore said the state would likely appeal the decision on the two dismissed counts. He also said it was not necessary to prove Connor made decisions about the way the massage businesses are operated to demonstrate that he engaged in racketeering.

“What you can’t be is a customer and a consigliere of a criminal enterprise … and actively help it succeed,” he said. “These shops are houses of ill repute and houses of prostitution.”

Elmore also claimed that Connor was known as “the lawyer you get because he makes charges go away” and argued that Tate, along with those allied with him, wanted to commit crimes at Connor’s request in exchange for his work on their cases.

But Brewster said Connor was a lawyer for three decades who had no blemishes on his record and who was obviously effective at his job.

Connor filed a libel lawsuit against Wright over comments he made related to the contents of the phone calls with Tate, whose phones were wiretapped while authorities investigated Tate’s role in a drug operation he oversaw from prison in McAlester.

Before being charged, court records show that Connor helped Tulsan Loren Sells — who owned the massage businesses after her husband died — win back nearly $800,000 in proceeds because, as Brewster put it, authorities “botched the paperwork” to seize it as unlawful funds.

Sells, whose case is pending, testified that Connor and another attorney were supposed to get roughly $200,000 of that money “with the understanding that it would be payment for everything that was forthcoming” in the legal system.

Before exiting the courtroom on Thursday, Seibert said she would have granted a request to reduce Connor’s bond to $50,000 from $250,000 but that legally Connor’s assigned trial judge would have to consider it.

Oklahoma Assistant Attorney General Heather Anderson said Seibert, as a magistrate judge, lost jurisdiction to decide Connor’s bond when she determined there was probable cause to send the bulk of the charges to the district court.

Seibert waived Connor’s appearance for an upcoming April 12 status check in the event either the state or defense formalizes an appeal of her ruling.

District Attorney talks about the ramifications of the McGirt decision

Two persons of interest in recent Wagoner homicide; no arrests made

There is no evidence of forced entry. No arrests have been made.

Anyone with information about Maurice Burgess' killing is asked to contact Crime Stoppers at 918-596-COPS (2677), bit.ly/TCStips or through the Tulsa Tips app, which can be downloaded from the Google Play or iTunes stores.

Attorney Winston Connor II and his attorney, Clark Brewster, walk out of the Tulsa jail in 2019. Connor will face a jury trial on racketeering and witness tampering charges, a judge ruled Thursday.

Winston Connor walks through the Tulsa County Courthouse with his attorney Clark Brewster on Monday.