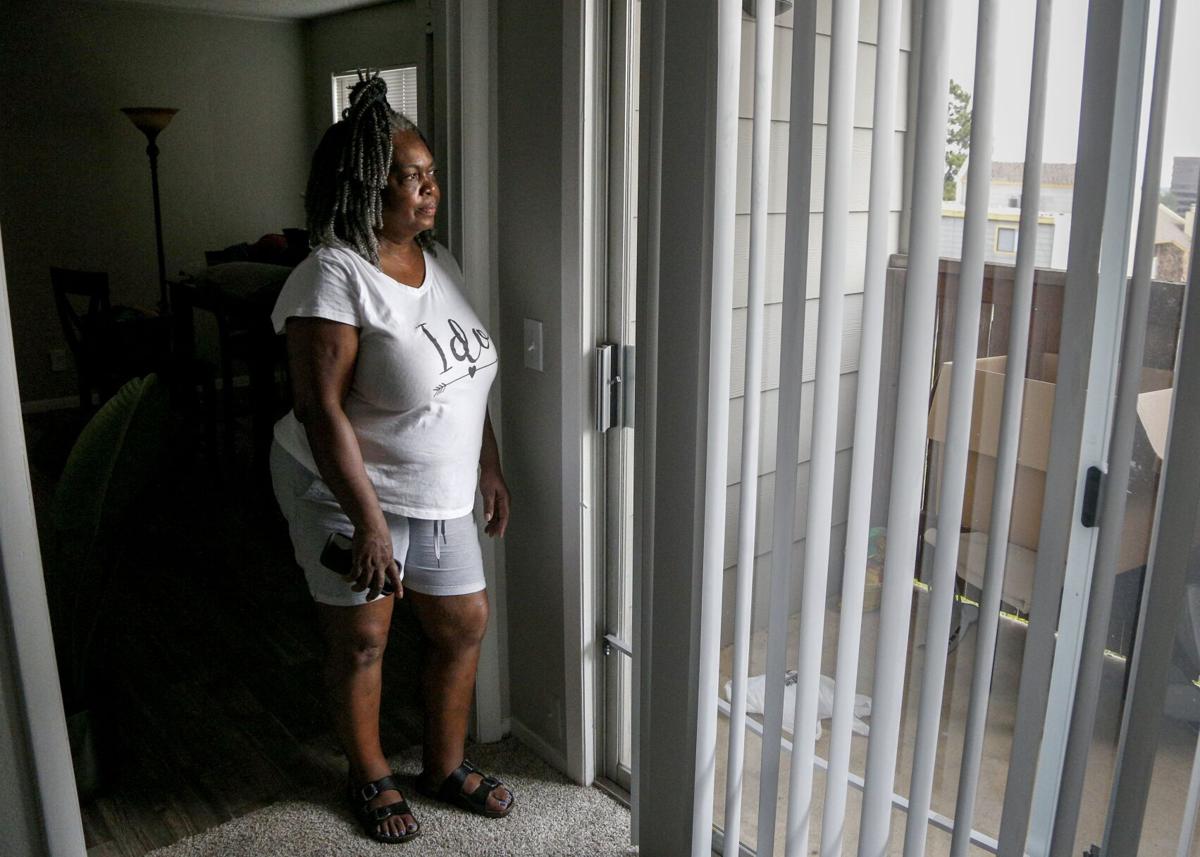 Regina Edwards was among the remaining residents who were forced to leave the Vista Shadow Mountain Apartments after city inspectors found numerous violations of the city’s building maintenance and fire codes at the complex. Edwards lived at the Vista for five years. 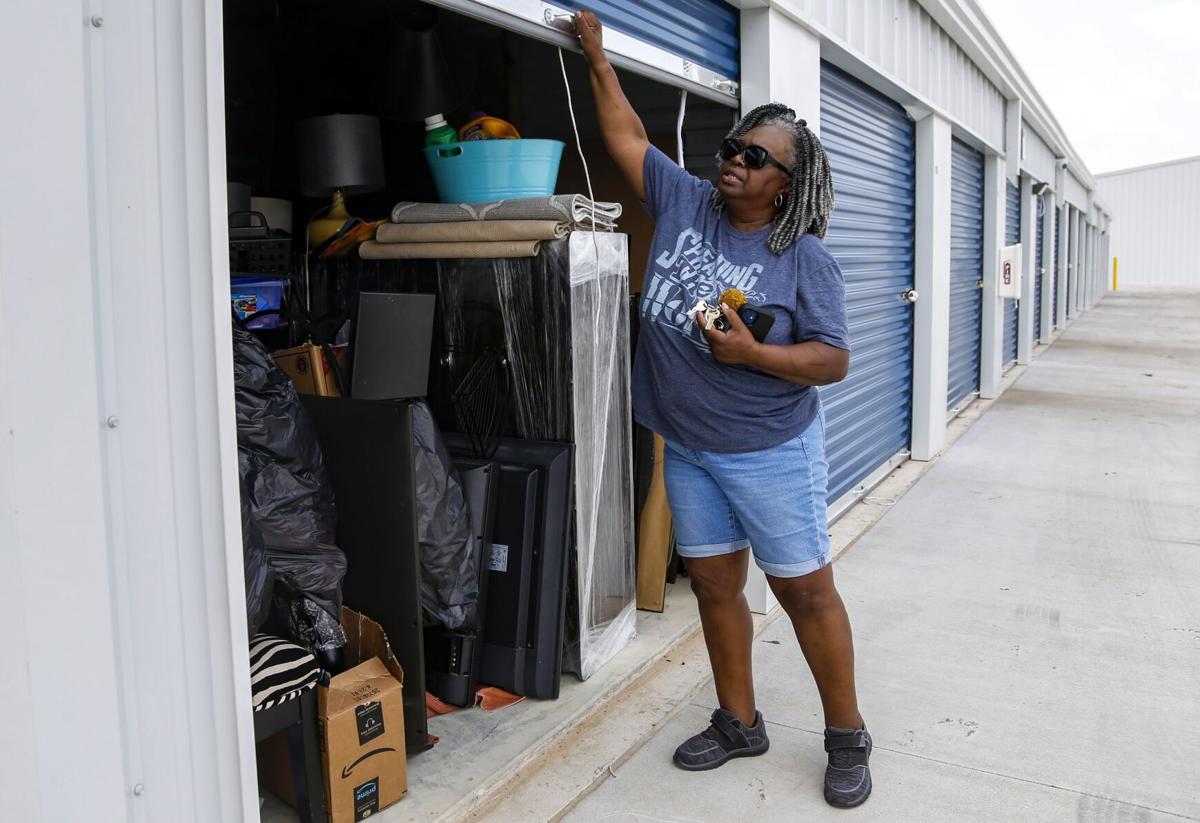 Regina Edwards closes her storage unit at T-Town Storage while moving her belongings out of the Vista Shadow Mountain Apartments. 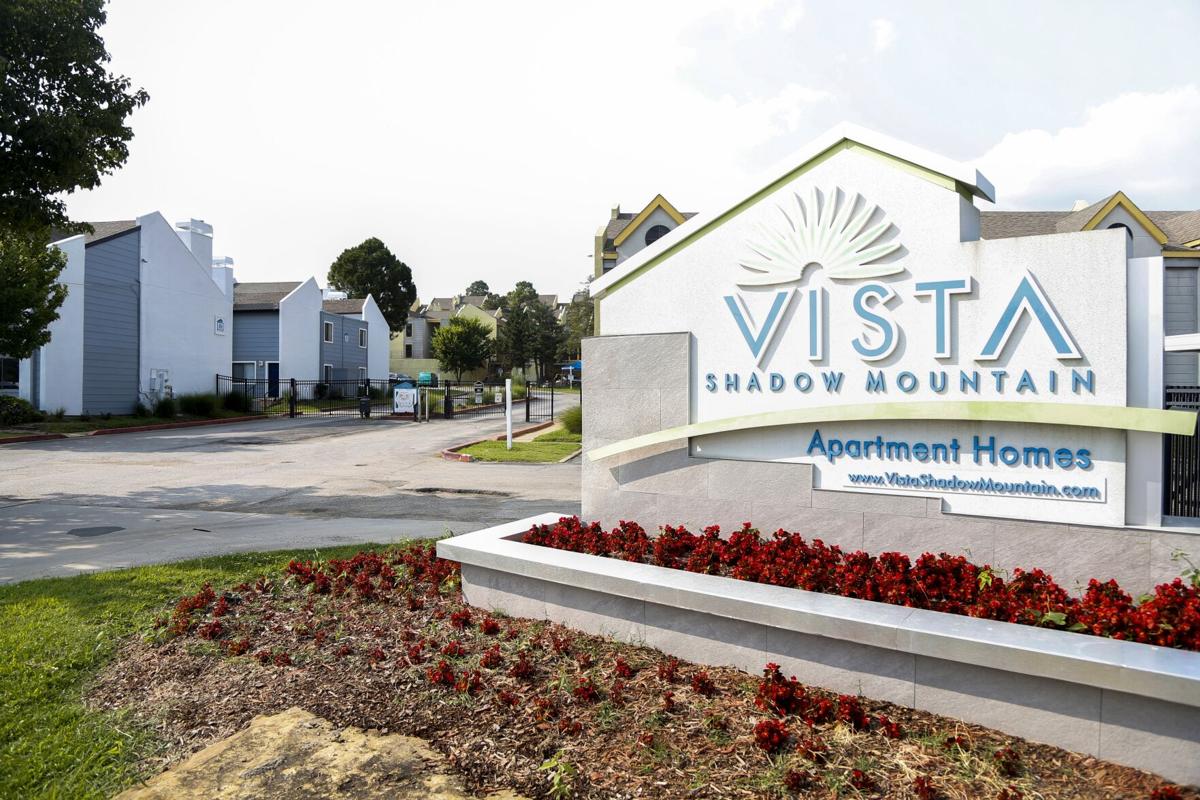 Residents were forced to move out of the Vista Shadow Mountain Apartments last week after city inspectors found numerous violations of the city’s building maintenance and fire codes at the complex. 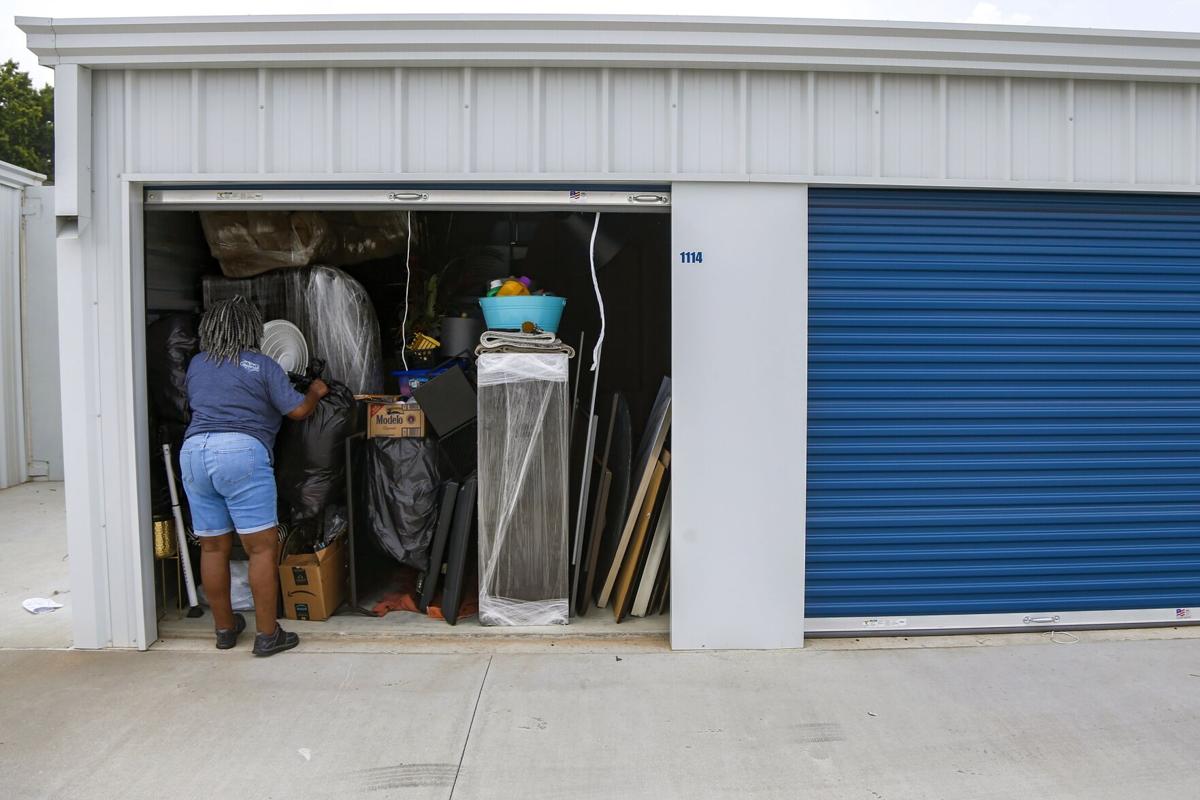 Regina Edwards organizes her storage unit at T-Town Storage on Wednesday, July 21, 2021 in Tulsa, Okla. All Vista Shadow Mountain Apartments' residents are required to be moved out by today. 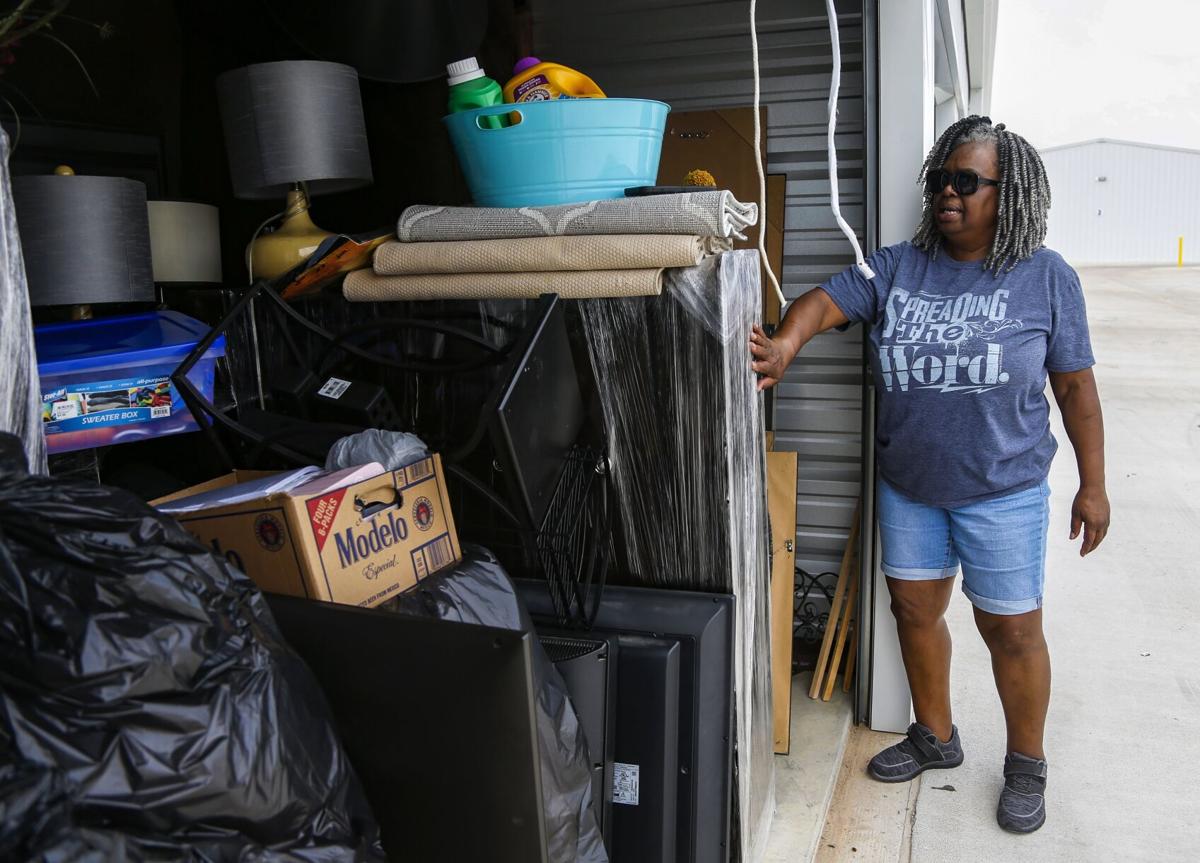 Regina Edwards is organizing her storage unit at T-Town Storage on Wednesday, July 21, 2021 in Tulsa, Okla. All Vista Shadow Mountain Apartments' residents are required to be moved out by today.

Edwards, 59, was one of more than 100 tenants at the south Tulsa complex who had until Friday to get out because conditions had gotten so bad the city wouldn’t let them stay.

“Stuff like that” also included tenants living without walls and floors, and water being shut off for days at a time. At one point earlier this month, the entire complex was set to be shuttered if the owners did not pay a $108,000 past-due water bill.

They finally paid the bill, and the water stayed on. But then in came city inspectors, who cited the complex for numerous violations of the city’s building maintenance and fire codes and ordered residents out by Friday.

After five years, it was time for Edwards to pack up and leave.

“I’m just kind of excited to move, to just go, because I have had enough,” she said.

Late Friday, Edwards and another former Vista Shadow Mountain resident filed a class-action lawsuit in Tulsa County District Court against the owner and operator of the complex seeking compensatory and punitive damages.

Kristin Maun gets the question all the time: How did this happen?

People want to know how Vista Shadow Mountain Apartments, a massive complex that sits a stone’s throw from a bustling south Tulsa mall, was allowed to deteriorate to the point that tenants were forced to leave.

Maun, director of housing development and incentives for the Tulsa Authority for Economic Opportunity, has a ready answer: a lack of affordable housing and a dearth of tenants’ rights.

“Tenants are frequently forced to accept conditions like this simply because there is no alternative,” Maun said. “When we have spoken to tenants who are living in apartments without walls, they are being confronted with a choice between unsheltered homelessness and a place that at least has a roof.”

City officials estimate the need for between 3,000 and 4,000 affordable housing units, a number that has likely increased since the pandemic hit.

“So as we look at situations like Vista Shadow Mountain, these are tenants who are employed, who are paying their rent, who are meeting all of their obligations, and yet are being forced to endure unsafe conditions because there isn’t a safe place for them to go.”

And should a tenant choose to complain about conditions, it comes with a risk, Maun said. Oklahoma is one of only seven states in the country that does not have anti-retaliation laws on the books to protect tenants from landlords who act against them for reporting problems.

“What that means is, if the tenant requests repairs or reports unsafe conditions like what we have seen at Vista Shadow Mountain to WIN (Working in Neighborhoods) or THD (Tulsa Health Department), a landlord can legally retaliate against them by decreasing their services, raising their rent, even trying to remove them from the property,” Maun said.

The state’s Landlord Tenant Act doesn’t offer much help, either. Established decades ago, it places a $100 limit per repair on the amount a tenant can deduct from his rent should he be left with no option but to make the repair himself.

“Quite frankly, you can’t make significant repairs for $100,” Maun said.

The city’s authority to keep rental properties in good repair also has its limits. Every new commercial building that is built is inspected during the construction process to ensure that it meets the city’s electrical, plumbing, structural and mechanical codes. It must then pass inspection for a certificate of occupancy.

After the certificate of occupancy is issued, a building is inspected only when permits are issued for major structural, mechanical, electrical and plumbing alterations. Beyond that, nearly all nuisance, property maintenance and fire code inspections are done on a complaint-driven basis.

“We do periodic inspections as time is available; however, the bulk of our efforts are driven by permitting inspections and complaints,” said Fire Marshal Andy Teeter. “... We did recently reorganize our office to dedicate two people to do inspections on targeted hazards and long-term issues. Multi-family residential complexes are part of their assigned duties.”

The largest financial penalty a landlord can face — other than the cost of fixing the problem for which he was cited — is $1,200 per violation.

City officials say House Bill 2620, which became law in 2014, created another hurdle in the inspection process.

“If we had a rental registration we could require annual inspections. Right now, we don’t even, technically, know where all the rental properties are.”

Pitchford said it is important for tenants to understand that a rental property cannot be inspected by the city unless the city is granted permission by the tenant or the property owner.

“Really what prevents us from doing inspections, proactive types, a lot of that comes down to property rights,” Pitchford said. “Tenants that have a problem with their unit or their house they’re living in have to be willing to call the city and work through the process of doing their inspection.”

Not all landlords are bad actors

City officials have been careful to note that Vista Shadow Mountain Apartments, 6000 S. Memorial Drive, is not the only bad actor in town. At the same time, they stress that the majority of landlords take care of their properties.

Keri Cooper, executive director of the Tulsa Apartment Association, said the unfortunate situation at Vista Shadow Mountain provides an opportunity for all stakeholders to look at the best ways to keep rental housing accessible and safe for all Tulsans.

“To ensure the needs of renters and rental housing providers are represented, it is critical that all stakeholders have a seat at the table and that rental housing providers continue to have the ability to efficiently manage their communities,” Cooper said. “We look forward to participating in an exchange of ideas as we all operate under the common goal of keeping people housed.”

Cooper noted the need for more rental units in Tulsa but said that comes with challenges for both developers and the city.

Vista Shadow Mountain is owned by a New Jersey-based company called CiTYR, according to Tulsa County Assessor’s Office records. The company has not responded to requests from the Tulsa World for comment on the situation at its property.

Vista Shadow Mountain tenants given until Friday to move out

The Fire Marshal's Office announced the extension from Wednesday's earlier deadline, saying the magnitude of the effort would require more time.

Housing Solutions is accepting donations online to help the approximately 100 residents of the complex, who must by out of their apartments by Wednesday.

“At this point, we’ll say there is not a building on the property that we’re going to let them occupy,” Fire Marshal Andy Teeter told Tulsa city councilors on Wednesday evening.

"The minority of landlords causing these monumental problems is the issue. The owners acting in good faith ought to be behind getting rid of these poor landlords," the editorial states.

"There’s room for practical rental reform in the Oklahoma Legislature," writes columnist John Waldron, a state legislator. "We could do more to rein in bad out-of-state actors without troubling local landlords who on the whole do a good job keeping up their properties."

The owners of the south Tulsa apartment complex have until July 21 to fix the problems, or tenants will be required to leave and the apartments will have to be secured.

Watch Now: Water to stay on at Vista Shadow Mountain Apartments — for now

The city of Tulsa said Wednesday that the south Tulsa apartment complex had paid enough of its $108,000 past-due water bill to retain service.

The south Tulsa apartment complex could lose its water supply Thursday because it has failed to pay its $108,582 past due bill.

Vista Shadow Mountain management says water bill will be paid: 'No one has to worry'

A managing member said the apartment offices were empty when residents received water cutoff notices earlier this week due to the Jewish holiday Shavuot.

Residents say the complex's office has been deserted.

Regina Edwards was among the remaining residents who were forced to leave the Vista Shadow Mountain Apartments after city inspectors found numerous violations of the city’s building maintenance and fire codes at the complex. Edwards lived at the Vista for five years.

Regina Edwards closes her storage unit at T-Town Storage while moving her belongings out of the Vista Shadow Mountain Apartments.

Residents were forced to move out of the Vista Shadow Mountain Apartments last week after city inspectors found numerous violations of the city’s building maintenance and fire codes at the complex.

Regina Edwards organizes her storage unit at T-Town Storage on Wednesday, July 21, 2021 in Tulsa, Okla. All Vista Shadow Mountain Apartments' residents are required to be moved out by today.

Regina Edwards is organizing her storage unit at T-Town Storage on Wednesday, July 21, 2021 in Tulsa, Okla. All Vista Shadow Mountain Apartments' residents are required to be moved out by today.