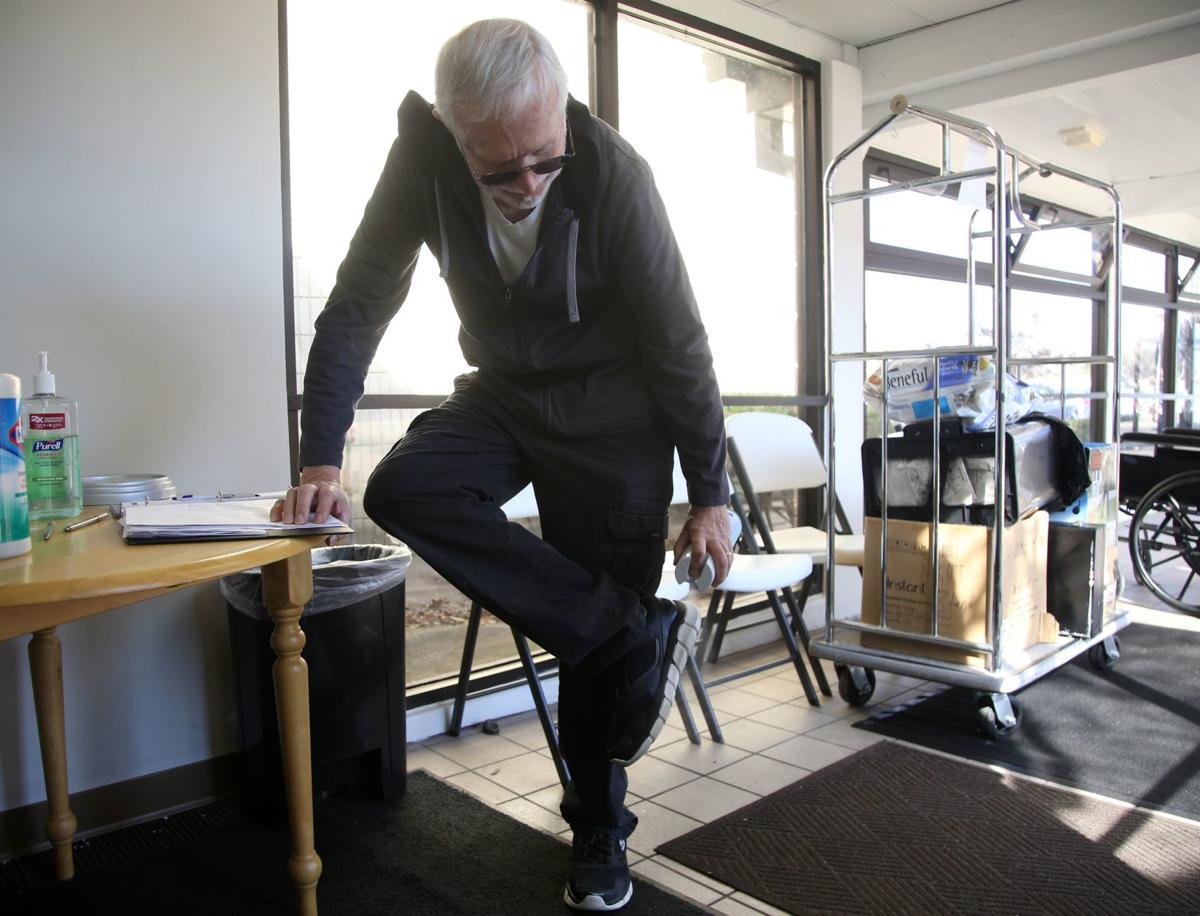 Gary Carr disinfects his shoes before visiting his brother at the Franciscan Villa care facility in Broken Arrow. The facility has limited visiting hours and requires all visitors to sanitize their shoes before entering. MATT BARNARD/Tulsa World 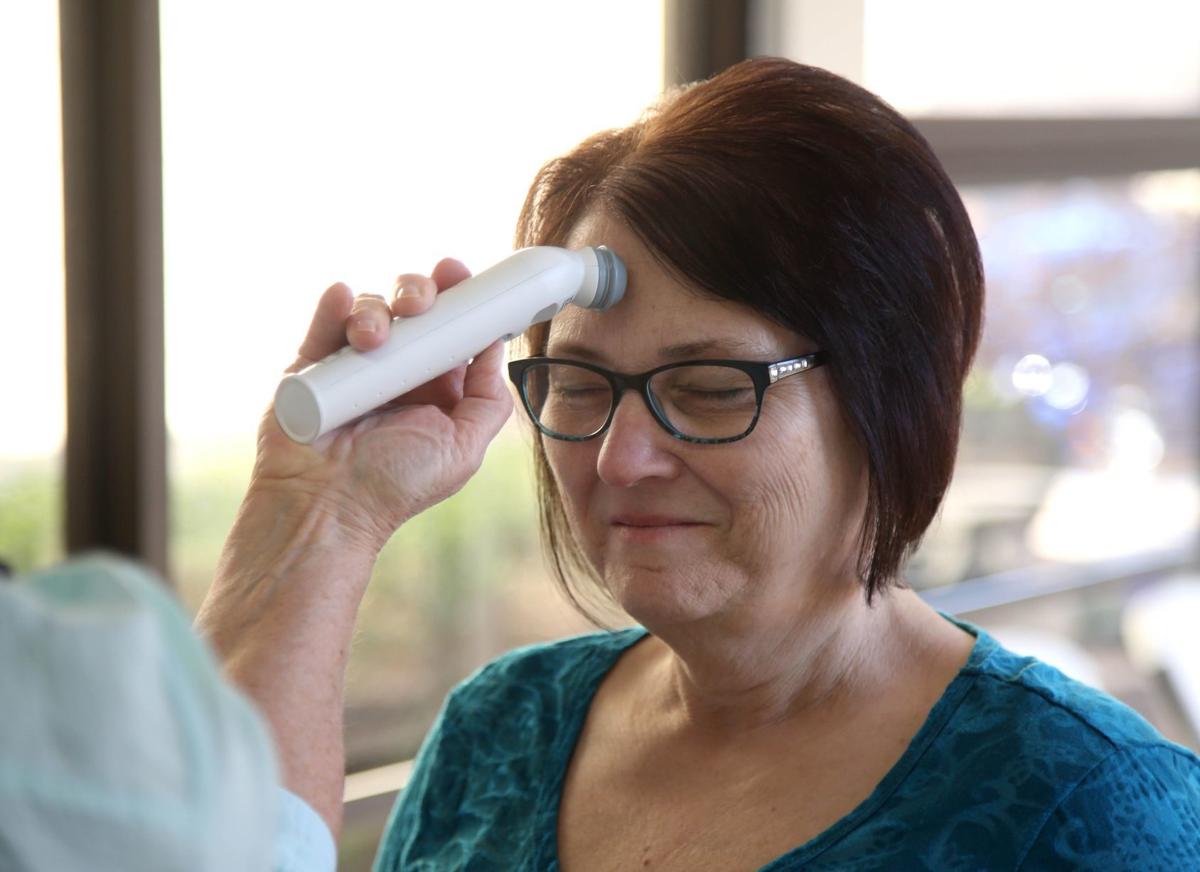 Tina Martz has her temperature checked before entering the Franciscan Villa care facility in Broken Arrow, Okla., on Wednesday, March 11, 2020. The facility has limited visiting hours and requires all visitors to sanitize their shoes before entering. MATT BARNARD/Tulsa World 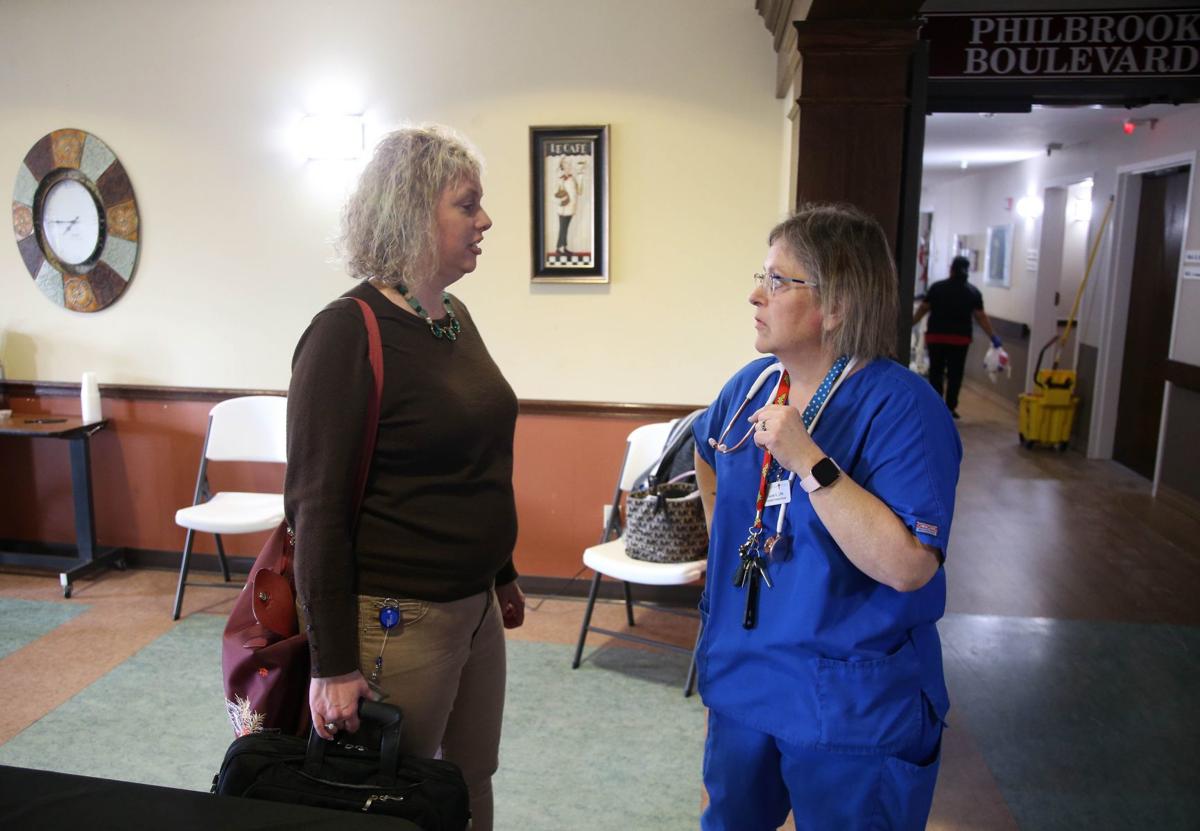 Sara Zimmer (left) talks with nurse Laurie Sagely after visiting her father at the Franciscan Villa care facility in Broken Arrow on Wednesday, March 11, 2020. The facility has limited visiting hours and requires all visitors to sanitize their shoes before entering. MATT BARNARD/Tulsa World 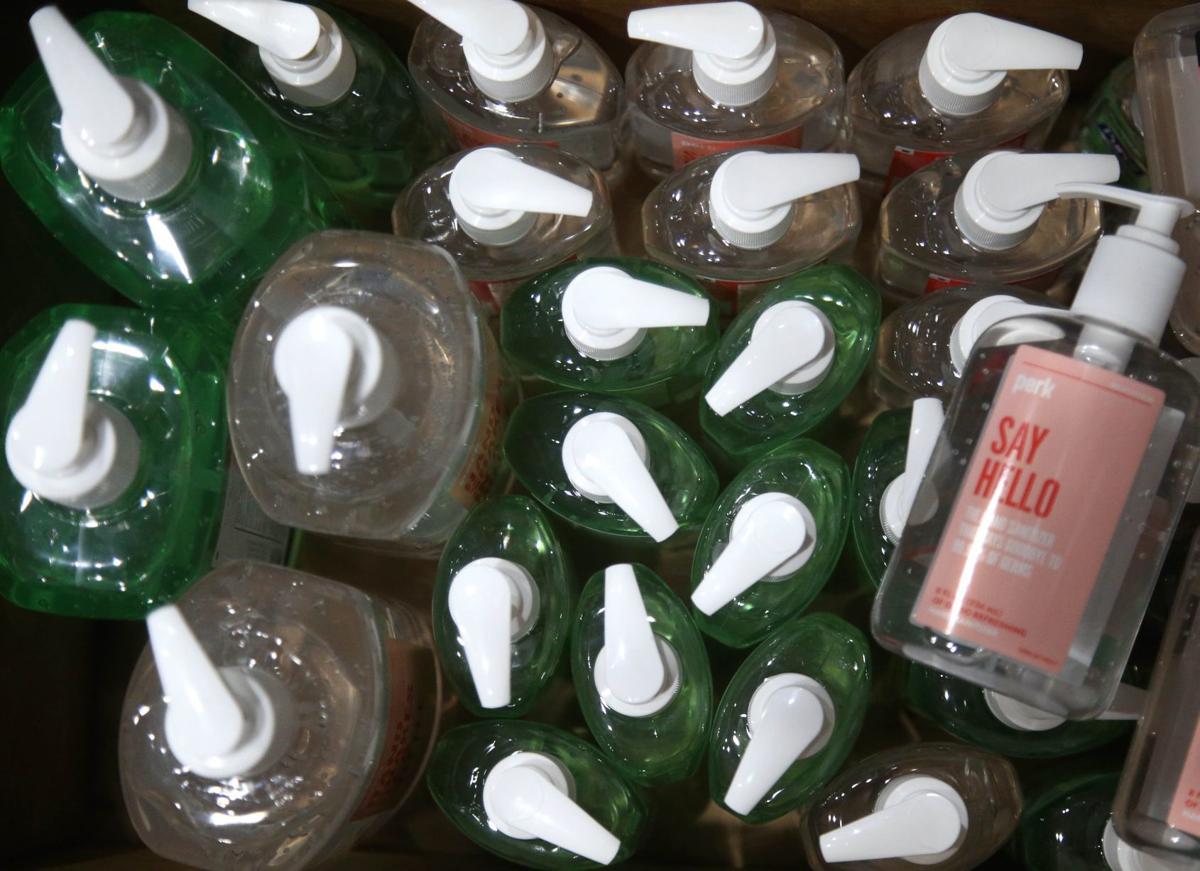 Bottles of hand sanitizer at the Franciscan Villa care facility in Broken Arrow, Okla., on Wednesday, March 11, 2020. The facility has limited visiting hours and requires all visitors to sanitize their shoes before entering. MATT BARNARD/Tulsa World

Now that he has more opportunity, Chuck Zimmer spends a lot of his time in prayer.

“I think it’s two or three hours of his day at least,” said Sarah Zimmer of her father, a long-term care resident whose health requires he stay mostly in bed.

“When I ask him what he’s prayed about,” she added, “usually it’s that the plans of darkness be exposed. Yesterday, it was about the virus.”

In the fight to keep COVID-19 out of their facility, officials at Franciscan Villa in Broken Arrow, where Zimmer is a resident, aren’t about to turn down prayers.

But over the last two weeks, they’ve explored about every other possible protective measure, too.

The latest came Thursday when, after previously adopting special visitation hours, they changed the policy again, this time restricting all outside access to the facility except when medically necessary.

Franciscan Villa, which has both long-term residents and shorter-term rehabilitation patients, is one of 20 care facilities owned and operated by Diakonos Group around the state, including two in Collinsville and two in Sapulpa. All have adopted the same visitation restrictions.

As the week came to a close, they’d been joined by a few others around the Tulsa area in what soon, it appears, will be the rule for all nursing homes. After President Trump officially declared the coronavirus pandemic a national state of emergency Friday afternoon, the Centers for Medicare and Medicaid Services indicated they would be issuing guidance directing care facilities to prohibit nearly all visits that are not deemed medically essential.

Staying on top of the rapidly evolving situation has been a full-time job, officials said.

“For the last two weeks, COVID has been 100% of my days. Everything else has stopped,” said Kimberly Green, Diakonos chief operating officer.

Restricting visitation was not something anyone wanted to do, she added. But with the elderly representing the group at greatest risk, the CDC, along with federal and state leaders, recommended it.

The move was the “best strategy,” agreed Steven Buck, president and CEO of Care Providers Oklahoma, which advocates for nursing homes and long-term care facilities.

“Every outside guest entering a facility introduces potential risk of infection.”

Restricting visits “will preserve health and save lives,” he said.

For Green, restricting visitation is difficult for more than just professional reasons.

With both of her parents at Franciscan Villa, she said, she has a personal stake in it, too.

“I had already told my dad, ‘you know, if it gets worse, I won’t be able to come see you like I do all the time,’ ” Green said. “My mom is really emotional about it. Seeing my little girl really makes her day.”

For her family and others affected, alternative ways of communication are being encouraged.

“We’ll look at anything we can do creatively so people can see each other,” Green said.

Setting up video calls will be one option. Also, the facility has big picture windows that will allow families and residents, if not to touch, to at least see each other.

Those large windows will be fully taken advantage of, Green added. Plans are also in the works for outdoor concerts and programs that residents will be able to enjoy from inside the facility.

The visitor restrictions are just the latest in a series of protective measures undertaken at Diakonos facilities. It started two weeks ago after news broke of a nursing home in Washington state being hit by the virus.

In one measure, “sanitization stations” were set up at the main entrances of facilities. The stations will remain in place for any necessary visitors to use.

People entering have their temperature taken to check for fevers. They also must apply antibacterial cleaning products to their shoes and accessories, then wait five minutes to allow it to take effect before proceeding.

A regular visitor at Franciscan Villa, John Martin wasn’t bothered by the measures.

“It’s not a big deal,” he said. “I was a project manager at a nuclear power plant. We had 50 times more rules than these.”

Martin had been driving from Inola every day to spend a few hours with his wife, Debbie, at the villa. They regularly communicate by phone and text, as well.

With the facility forced to eliminate most visitation, the Martins say they will deal with it.

“We’ll do whatever we need to do,” said Debbie Martin, one of the villa’s 65 long-term care residents.

One option might be for John Martin to move in. Diakonos officials said they are preparing to set up temporary beds that would allow spouses of residents to stay in their rooms.

During one of her last visits last week, Sarah Zimmer was less confident about her options. Asked about the possibility of not being able to visit her father, she said it would be hard because he depends on it so much.

He’s a recent widower, having lost his wife of 56 years, Ruth, a few months back. Her picture is on the wall where he can see it from his bed, alongside her last note to him, which reads “I love you.”

How important is it to Chuck Zimmer that he sees his daughter in person every day?

He tried to find the words, before slowly holding up his right forefinger.

“He’s a trooper,” she said. “But I don’t know how long he would live if he didn’t get that emotional support. You can’t give cyber hugs or kisses.”

The villa’s staffers, meanwhile, will keep doing what they have been: Taking it one day at a time while also trying to think ahead.

“Things have been changing on a daily basis,” said Marla Heckman, Franciscan Villa executive director. “We’re changing our policies daily — almost hour by hour, it seems like — just to make sure we’re protecting everyone.”

Key in that has been keeping everyone informed, Heckman said. Family members received letters and phone calls about the response to the virus. Residents are informed additionally through regular meetings of the facility’s resident council.

“I remind our staff that it’s all in delivery and communication,” Green said. “It’s all in how we’re handling this, in our body language. The way we respond to it is imperative.”

Then, there are the villa’s staff members to consider. Alexis Batiste, director of clinical services, is focused on keeping them healthy.

Besides keeping the staff abreast of policies and practices, she began stockpiling vitamins and immune system boosters and bringing them to work to share.

“It could cause a staffing crisis for us if all my staff gets sick,” Batiste said. “There have to be people to take care of our residents.”

Staff members also have their temperatures checked twice a day, when they arrive and when they leave.

For Debbie Martin, that focus on keeping everyone safe has been comforting.

“I was concerned,” she said, adding that she’s kept up with the news on the television in her room.

“But I feel secure here with everything they are trying to do to protect us. I definitely don’t have the fear I would if I was outside the facility.”

Sarah Zimmer keeps her father up to date on the virus as needed, she said.

“He doesn’t watch the news,” she said, adding that he prefers to keep his TV on religious programming.

While worried about visitation, she at least can take comfort knowing her dad is where he’s at, Zimmer said.

“I know that no matter what, he’s going to be protected here.”

The novel coronavirus COVID-19 has been declared a pandemic by the World Health Organization. Below are the number of confirmed cases as of 7 p.m. Saturday.

Gary Carr disinfects his shoes before visiting his brother at the Franciscan Villa care facility in Broken Arrow. The facility has limited visiting hours and requires all visitors to sanitize their shoes before entering. MATT BARNARD/Tulsa World

Tina Martz has her temperature checked before entering the Franciscan Villa care facility in Broken Arrow, Okla., on Wednesday, March 11, 2020. The facility has limited visiting hours and requires all visitors to sanitize their shoes before entering. MATT BARNARD/Tulsa World

Sara Zimmer (left) talks with nurse Laurie Sagely after visiting her father at the Franciscan Villa care facility in Broken Arrow on Wednesday, March 11, 2020. The facility has limited visiting hours and requires all visitors to sanitize their shoes before entering. MATT BARNARD/Tulsa World

Bottles of hand sanitizer at the Franciscan Villa care facility in Broken Arrow, Okla., on Wednesday, March 11, 2020. The facility has limited visiting hours and requires all visitors to sanitize their shoes before entering. MATT BARNARD/Tulsa World