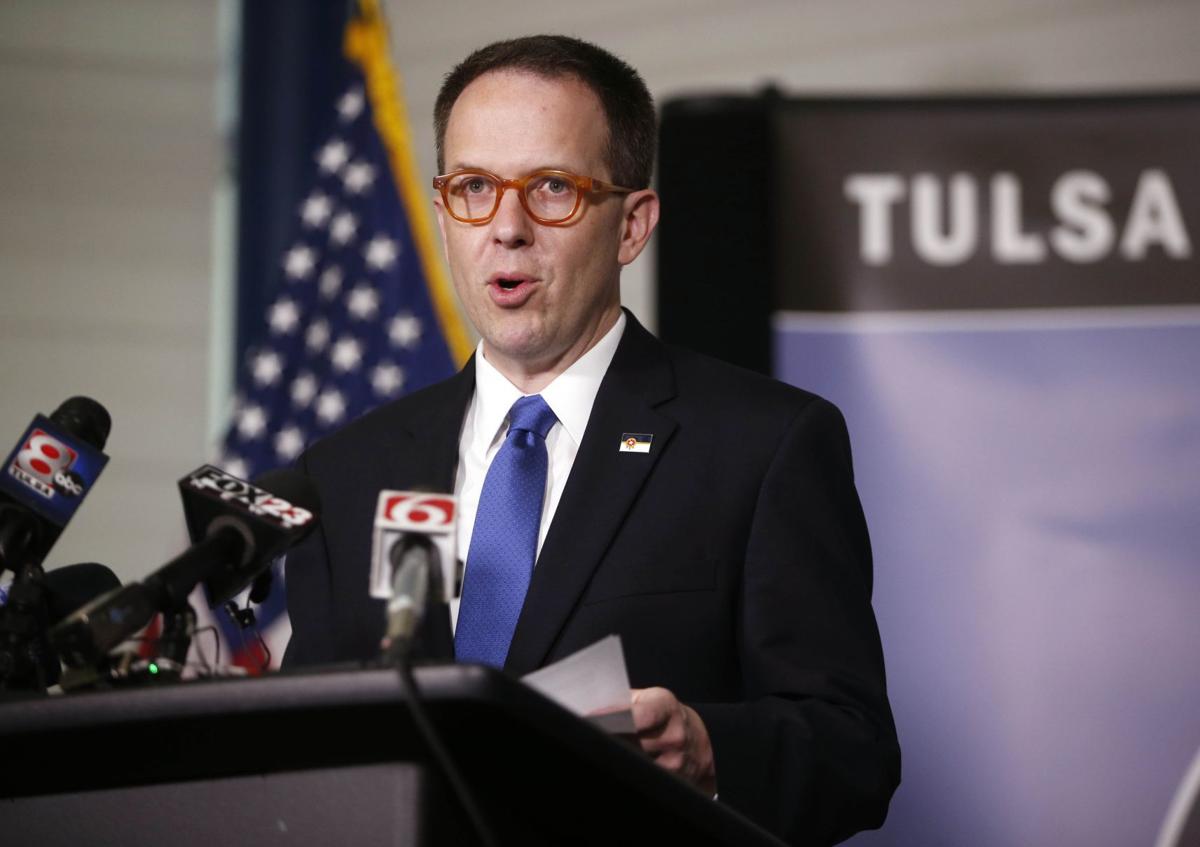 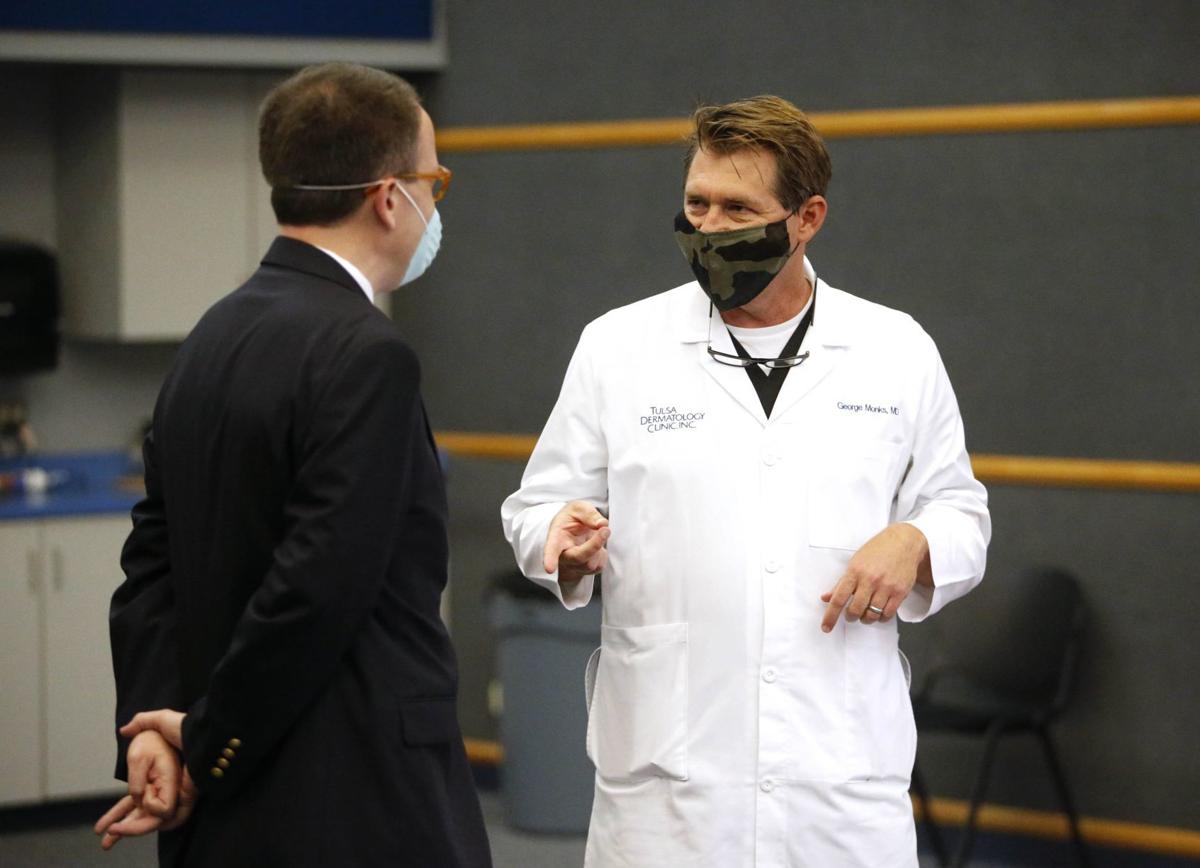 Tulsa County’s COVID-19 rate has grown to unacceptable levels and the health-care system is at risk of becoming overwhelmed if the trend isn’t reversed, local officials said Thursday while unveiling two types of restrictions and a safety program.

Mayor G.T. Bynum said the novel coronavirus has grown to an “unacceptable new normal” of positive cases in the past several weeks. Bruce Dart, Tulsa Health Department executive director, cautioned that if people fail to normalize mask wearing, hand washing and physical distancing then “we have great potential to be overwhelmed” in the public-health and health-care systems.

So Bynum announced three efforts Thursday to try to bend the curve back toward where it was during the first month of reopening:

• A COVID-19 safety program in partnership with the Tulsa Health Department that businesses and organizations can opt to do to become certified by THD.

• Any event of 500 or more people in the city on or after July 16 must have a safety plan approved by THD.

• All bar and restaurant employees must wear masks.

Bynum said these modifications to the reopening process are “minimally invasive” and intended to facilitate activities Tulsans want to engage in, allowing for customizable safe approaches to try to avoid revisiting more stringent restrictions.

“If we don’t want to roll back to earlier shutdown measures that hurt our economy and cost people their jobs, then it’s up to each of us to be smart about how we celebrate Independence Day,” Bynum said. “Please keep these three things in mind: clean hands; distance from others; and masks that reduce your ability to unknowingly spread the virus — not just this weekend but every day.”

Bynum said that a strength of Gov. Kevin Stitt’s reopening plan two months into it is that its standards apply to all communities in the state rather than a patchwork of regulations that arose during the pandemic’s outset as municipal leaders grappled with what to do.

“A clear weakness of this plan is that it does not adapt to local fluctuations, particularly in those urban areas where population density is much greater,” Bynum said. “I was glad to hear Gov. Stitt announce earlier this week that a more granular approach is in the works, but in Tulsa we’ve seen positive cases increase.

“Our hospital capacity remains strong, but we can’t take that for granted over the long haul.”

Bynum noted that Church on the Move and McNellies Group are the first two entities to begin drawing up COVID-19 safety plans to be reviewed by THD.

He said many businesses and religious institutions have reached out to him and health officials that want “to do the right thing” but find state and federal guidelines too vague because they are designed for entire industries rather than specific local facilities.

Bynum said he had discussed with Dart about whether Tulsa needs to ban events of a certain size. He said Dart told him that it depends on the event’s circumstances and environment.

So Bynum said that, instead of establishing an arbitrary size cutoff, he will require any event of at least 500 people to have a safety plan approved beforehand.

“This will allow the department’s staff to work with event organizers on a case-by-case basis in making safe decisions,” he said.

Bynum said that if at any point Dart feels a citywide mask order is necessary, he will issue an executive order for it on that day.

For now, the mayor said, the Health Department is recommending the mask mandate for all bar and restaurant workers while at work.

“This is something that we should have put in place on May 1, and I’m very thankful for the many restaurant and bar operators that have already been doing this,” Bynum said. “As we go through something as unprecedented as this, we continue to see things that in retrospect we wish we had put in place. And you can’t hop in the DeLorean and go back in time and do those, you can only do those moving forward.”

The Health Department is tasked with monitoring compliance of the executive order. Spokeswoman Leanne Stephens said non-compliance can be reported to the Food Protection Services division of THD at 918-595-4300.

“THD will respond to complaints of non-compliance and will follow up with the establishment to educate them on the importance of wearing a mask,” Stephens said. “This is intended to be a collaborative effort.”

Oklahoma City Mayor David Holt on Wednesday announced that — for a period of two weeks — bar capacities would be lowered to 50%, and that venues with theater-style seating must stagger seating — two moves absent from Bynum’s actions Thursday.

Both enacted a mask requirement for all bar and restaurant employees in their respective cities.

The mayors of Oklahoma’s two largest cities have been in sync during the pandemic in implementing restrictions to try to curb the disease’s spread.

Thursday marked a departure from that practice. Bynum explained that his latest moves are being guided by “data on the ground” in Tulsa, rather than national trends or what he’s seeing in other cities.

Bynum met a week ago with leaders of other municipalities in Tulsa County. He said there was a lot of enthusiasm for the countywide safety plan program but that he wouldn’t want to speak for his colleagues on how they felt about the two regulations he is implementing.

“A bar is not safer on one side of the city line versus another,” Bynum said. “So I certainly encourage my colleagues in other communities to implement similar restrictions to what we’re doing here based on the data from the Tulsa Health Department.

“But that is their decision to make based on what they think is best for their community.”

Dart reported that the week of June 21-27 saw a 22% increase in new cases over the prior week.

The age 18-35 demographic is still the largest proportion of positive cases, Dart said, with more than 40% of all new cases. Ages 36-49 is the second largest group, with almost 30% of cases.

“The scary thing is that we have gotten quite a bit of push back on our modeling data,” Dart said.

“Unfortunately right now the case counts are even higher than what we modeled.

“So the bottom line is that if people start to normalize these recommendations around wearing a mask, staying six feet apart and washing your hands, we can get the curve flattened back to where it was pre-opening. But our modeling shows that if we can’t normalize this kind of activity and really get people to be aware and sensitive to physical distancing, wearing masks and washing hands, we have a great potential to be overwhelmed — both our public-health and health-care systems.”

Bruce Plante Cartoon: Mask or not

Bruce Plante Cartoon: No thanks!

Bruce Plante Cartoon: Thanks from the Coronavirus

Bruce Plante Cartoon: Toilet paper back in my day...